By Kaku Sechiyama : Professor at University of Tokyo
December 19,2014 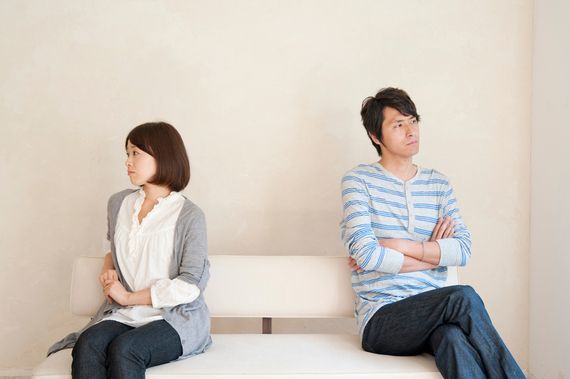 Japanese are known to have considerably low sexual frequency, and extremely low satisfaction in their sexual life. We will look at why Japan has become a sexless nation, and why this could prove to pose a problem for the country.

Japan has the lowest sexual frequency in the world

Durex, the leading condom manufacturer from United Kingdom, conducted a “Sexual Wellbeing Global Survey”. The data was featured in the media and the results were quite shocking.

Japan has the lowest sexual frequency in the world, and it is the only country where the percentage of people who are not happy with their sex life is higher than that of those who are. Of course, there could have been inconsistencies with the sampling. There could have been some bias from the participants since it was conducted on the Internet, however, it seems that steps were taken during the sampling to counter this issue. In addition, this survey had been conducted a few times, and the results were similar each time. Therefore, although there could have been a degree of biasness in the sample, the statistics are still significant and worth looking at. Let us look at the survey conducted by Durex in 2005. The average Japanese has sexual intercourse 45 times a year, the lowest number among all the 41 countries surveyed. Moreover, this number is only 60% that of Singapore, the country that is listed as second last, and less than half of the overall average number of all the countries, a strikingly low number. 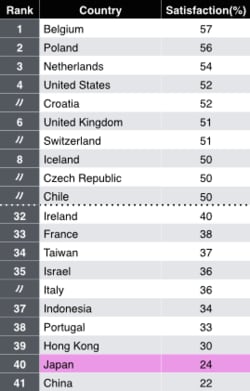 Presuming that the parties involved are happy with their sex lives, the number of times they have sex may not matter very much. However, if both the frequency and level of satisfaction are obviously low, and the percentage of people who are open minded toward sex is also low, then the problem is relatively serious. It shows that even the necessary attitude (of openness) that is required to solve this problem is lacking. As a result, the proportion of people who are open minded and are able to convey their sexual desires to their partners are few, placing Japan as third from the bottom of the list, positioning it even lower than that of Islamic countries such as Indonesia and Malaysia.

When foreigners come to Japan, they are surprised by the advertisements on the train showing women clad in swimsuit, or the weekly magazines and newspapers that show pictures of nude women being sold at newsstands at the train stations. The Japanese society that is overflowing with connotations of sex, is in reality, a sexless society.

In a survey conducted in 2011 targeting 37 countries, the results included the percentage of people who have sex more than once a week, and unsurprisingly, Japan was in last place at 27%. This number is less than half that of United Kingdom (55%), which came in second last. Seeing how its people are not having much of a sex life, it is only natural that the birthrate in Japan has been on the decline.

There was also a reliable survey conducted in Japan based on random sampling. It was a “survey on sexual behavior and sexual awareness of Japanese people” conducted by NHK, Japan’s national public broadcasting organization, in 1999.

This survey was targeted at people who are in their 20s, 30s, and 40s, and have partners (whether married or not). Since there is a possibility that each person’s definition of “sexless” is different, in this survey, “sexless” had been defined as having sex less than once a month.

According to that definition, the percentage of people in their 30s who are “sexless” is 19%, even higher than that of people who are in their 40s (16%). Although this result contradicts the results from the survey conducted by Durex (27% have sex more than once a week), it is important to note that while Durex’s survey targeted anyone above the age of 18, NHK’s survey only targeted people who have partners.

I appeared on NHK 15 years ago to make a commentary on sexlessness in Japan based on the survey, and mentioned on the program that it is understandable for the people in their 30s to have less sex than people in their 40s. Most people who are in their 30s have their hands full raising their children, and are extremely busy with work, so they end up becoming too preoccupied for sex. Another reason could be because some of these parents let their children sleep with them.

However, since the reason that 19% of the people in their thirties do not have sex is due to being dissatisfied with their sex life, it poses a big problem.

Sexlessness is a risk factor in marital relationships

43% of the women who are “sexless” gave the reason of “not sexually satisfied with partner”, a number that is strikingly high and is way above the men’s percentage of 21%. This is a huge contrast to the “non-sexless” group, where approximately 90% of both the men and women said that they are satisfied.

It appears that the reason the percentage of women who are dissatisfied is twice that of the men’s, is due to their inability to convey their dissatisfaction. It is a problem that stems from the fact that there are relatively few people who are ”open minded” about their sex life, as shown in the Durex survey.

In addition, 77% of couples that are sexless either never have or rarely have discussed the topic of sex, which is significantly higher than the 43% of the non-sexless couples. Consequently, by not bringing up the problem, these couples have unintentionally given up the chance of solving their problems.

It is understandable that couples find it hard to have sex when their children are still young, since they are busy and never have enough time on their hands. However, no matter how busy, if married couples do not put in the effort of doing simple gestures such as kissing and hugging and finding the time to communicate, the relationship will slowly go cold.

As time passes, even if many of these couples find themselves trying to get closer, they would feel like it is already too late. Taking their problems lightly and leaving them as is would result in irreversible damage to the relationship, and that would be a really big problem.