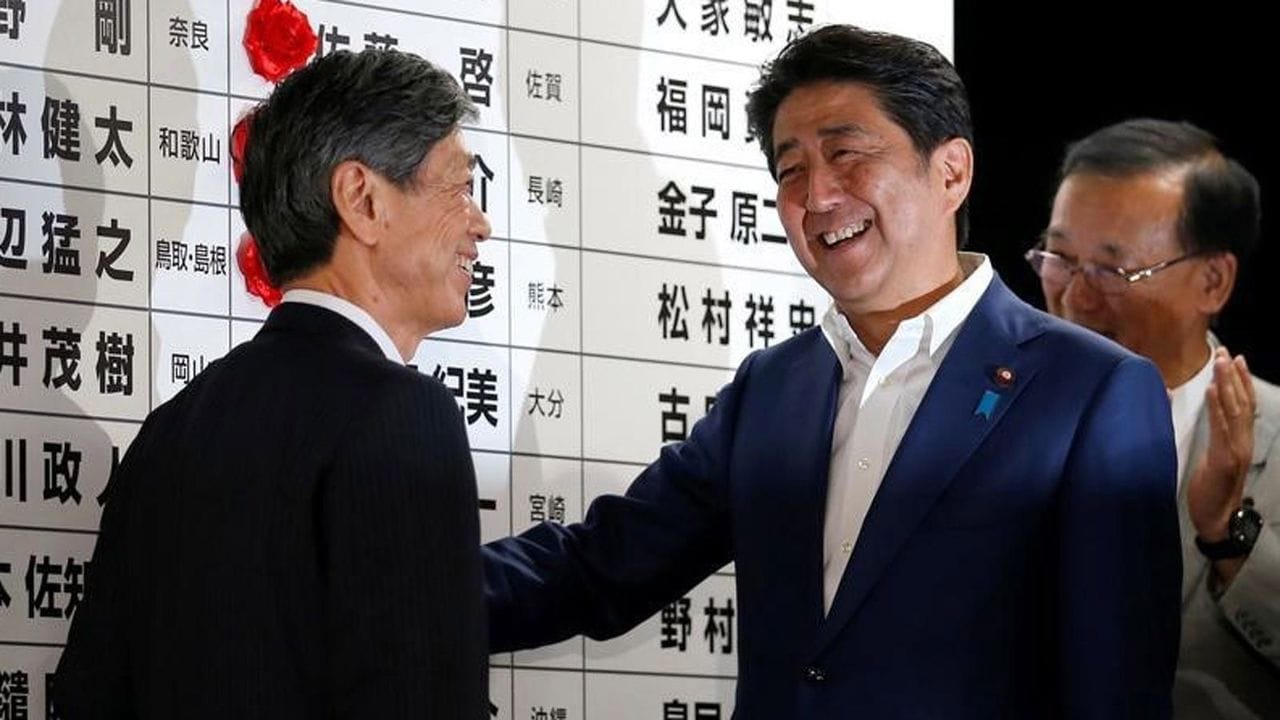 Japan's Prime Minister Shinzo Abe (2nd R), who is also leader of the ruling Liberal Democratic Party (LDP), smiles with party senior members as he puts a rosette on the name of a candidate who is expected to win the upper house election, at the LDP headquarters in Tokyo, Japan on July 10, 2016. (Photo by Toru Hanai/Reuters)

Inside the small world of U.S. experts on Japan, there was an audible sigh of relief when the ruling coalition gained yet another victory in the elections for the upper house of parliament. Amidst the turmoil of voter rebellion in Europe and the United States, Japan shows itself – again – to be an island of political stability.

“With the U.S. going into an extended lame-duck and transition period and the EU [European Union] going through an existential crisis, the international community needs an industrialized democracy that has a strong government with a relatively wide mandate.”

What the U.S. wants Abe to do next

With the ruling coalition in firm control of both houses of the Diet, and with Abe unchallenged within the Liberal Democratic Party, American policy makers hope that the Prime Minister uses this power mainly to give new impetus to his stalled economic reform agenda. A new fiscal stimulus program, structural reform in areas such as labor and immigration, ratification of the Trans Pacific Partnership (TPP) and tackling fiscal and demographic challenges should top Abe’s agenda, suggests Deming.

“It is the interest of the U.S. and other nations that support a liberal international order that Japan succeed in reinvigorating its economy and society so it can expand its constructive regional and international role,” he says.

A senior staff official in the U.S. Congress with long experience in Japan shares that view. “With Abenomics not yet delivering as advertised, with the Yen now more expensive than before – thanks to voters in the U.K. – and Japan sailing into global economic headwinds, the enormity of the challenge is not to be underestimated,” the official told Toyo Keizai.

But this official, like others in Washington, knows that Abe is still obsessed with the other item on his agenda – “Abe imagines his place in history where he clearly sees his legacy as revising Japan’s peacetime constitution and reversing the larger post-war cultural dynamic of passivity, if not pacifism, in Japan’s foreign policy.”

Most American experts have reached the same conclusion as Japanese voters – while they retain lurking fears about how the Japanese rightwing will use its mandate, there is simply no viable alterative to the current political order in Japan. The inability of the Democratic Party to offer a credible opposition forces voters, many who are far from happy about the Abe government, to cast their ballots in favor of stability, in the hopes Abe will ultimately deliver on promises of economic growth and reform.

Still, American experts worry Abe will again lose his focus on the economy. Behind that lies a deeper fear that a bid to change the post-war historical order could trigger a harsh reaction from China and South Korea, destroying what little progress has been made in recent months toward regional stability.

“With respect to the impact of the election on Japan’s relations with its Asian neighbors, the only problematic countries are likely to be China and, to a lesser extent, the ROK,” notes Deming. “Much will depend on how Beijing and Seoul choose to react.” Already we have seen early signs of renewed talk about Japanese militarism in the Chinese and Korean media in response to the election.

“For the Abe government, it will be important to continue its efforts to engage both China and the ROK and to avoid actions and words that are likely to inflame contentious historical and territorial issues,” warns Deming, who remains an influential policy voice in Washington. “To the extent that the election results embolden the LDP rightwing to push their revisionist agenda, Japan’s relations with China and the ROK could be in for rough sailing.”

For the most part, the election results are seen as good news for the U.S.-Japan security alliance. American policy makers are eager to move ahead on the implementation of the new security legislation, based on the re-interpretation of the constitution to allow for collective self-defense. But they also see the need to reassure both the Japanese public and Japan’s Asian neighbors that Japan’s growing security role will not lead to the use of force.

The decisive defeat in Okinawa

One serious downside of Sunday’s vote for the U.S. was the decisive defeat in Okinawa of the LDP’s candidate, Aiko Shimajiri, the Cabinet member in charge of Okinawa affairs. The victory of the former mayor of Ginowan, Yoichi Iha, one of the staunchest opponents of the plan to relocate the Marine air base at Futenma to a new base in Henoko, strengthens the Okinawa opposition to the base plans.

American policy makers have been privately talking about the need to re-examine alternatives to that plan, despite the public solidarity with Tokyo. That talk is sure to intensify after the election.

“If Abe does try to push ahead with the Henoko plan by using strong-armed tactics, the backlash in Okinawa will be severe and possibly threaten the U.S. ability to use more strategically vital military assets on Okinawa like Kadena Air Force Base,” Professor Mike Mochizuki, one of the leading American experts on Okinawa, told Tokyo Business Today.

“Instead of stubbornly sticking to the current plan, Tokyo and Washington should begin exploring alternatives that would make U.S. Marine deployments more effective and efficient in addressing the myriad security challenges in the Asia-Pacific region while reducing the permanent Marine presence on Okinawa.”

Deming, who has been deeply engaged on base issues for decades, agrees with this sober assessment. “The Henoko plan has been on life-support for some time, and this election defeat may represent the final blow,” he says. “It would be wise for the Abe government use this as an opportunity to engage the U.S. in an in-depth study of U.S. basing in Japan and the region to move toward a more sustainable and efficient long-term posture.”

Privately American defense experts are looking for other ways to shore up deterrence against a rising China and North Korea through expansion of American air and naval forces based in Honshu such as the Yokosuka naval base and the air base in Misawa.

The current positive mood in U.S.-Japan relations could quickly turn downward if Abe and the LDP opt to vigorously pursue constitutional revision, particularly of the anti-war Article 9, and if the U.S. election turns even more sharply toward isolationism. Both of those developments could encourage those in Japan, particularly on the rightwing, who want to go down the road of strategic independence from the U.S.

Most American experts do not believe, however, that the election results will lead rapidly to constitutional revision. Abe’s decision not to campaign on that issue, and his careful words after the vote, reflect the reality that Japanese voters remain deeply skeptical about the need for constitutional change.

“The anti-Abe forces led by the Democratic Party and the Japan Communist Party tried to make the election about Abe’s long-held desire to revise the constitution,” comments Professor Mochizuki, who holds the Japan-U.S. relations chair at George Washington University.

“Although persistent and widespread public opposition to the new security laws as well as revision of Article 9 made this an understandable strategy, this game plan failed to defeat Abe. Abe shrewdly deflected a discussion of the LDP’s constitutional revision proposal during the campaign and instead focused on economic policy and the ideological contradictions within the Democratic-Communist electoral alliance. “

Pro-revision forces now hold a slightly more than two-thirds majority in the upper house of the Diet, enough to bring constitutional amendments to a public referendum vote. “At first glance, the result appears to enable Abe to revise article 9, but such a conclusion is misleading,” says Mochizuki. The LDP’s coalition partner, the Komeito, would balk at revision of Article 9, and the Japanese public has repeatedly made clear in polls that it also opposes such as a change.

“A more likely course is that Abe will use his victory to initiate deliberations on constitutional revision in the Diet and work to develop an amendment proposal that even the Komeito could embrace,” predicts Mochizuki.

“This would be similar to the tactic that Abe used to get this security legislation approved. Although Abe might not be able to alter article 9, he could become the first prime minister to lead Japan to formally amend the constitution.”

The professional managers of the security alliance in Washington embrace Abe and the stability his prolonged administration has brought to the relationship. But even those who strongly back Abe are signaling the Kantei to tread carefully onto the road of historical revisionism.

“These issues are contentious in Japanese politics and potentially provocative to Japan’s neighbors,” Deming says carefully. “It will be important that the Abe government proceed cautiously and transparently to avoid roiling both domestic politics and Japan’s foreign policy.”