By Richard Katz : Senior Fellow, Carnegie Council For Ethics in International Affairs
May 13,2016

It’s the very first thing they teach you in Economics 101: “there’s no free lunch.” Anything offering a benefit comes with a cost. Even clean air is no longer free. And so the real question is whether the benefits outweigh the costs. That is the question confronting Bank of Japan Governor Haruhiko Kuroda as he plunges deeper and deeper into the land of negative interest rates.

The costs are very clear, even if their magnitude remains to be seen. Negative rates squeeze the profits of banks and life insurers. Moreover, in response to the announcement of negative rates on February 29, some life insurers have even dropped certain annuity products that Japan’s elderly need to fund day-to-day living expenses.

This article was originally published in the May issue of The Oriental Economist.

On the other hand, benefits are hard to find. Contrary to Kuroda’s expectation, the yen has continued strengthening despite the negative rates and is now up 6% from February28. The stock market has kept on falling and is now down 23% from its June 2015 level. In March, the BOJ’s target for inflation, all items except fresh food, fell into negative territory, -0.3%, only the second fall since Kuroda took the helm in April 2013.

Most important of all, like all of Kuroda’s easing before it, negative rates seem to be doing very little, if anything, for the real economy. GDP fell at a 1.1% annual rate in October-December. J.P. Morgan now predicts zero growth in January-March (to be reported on May 18) and a 1% fall in April-June.

We have always argued that, while the BOJ could not produce inflation at will, it could suppress interest rates just by buying a ton of Japan Government Bonds (JGBs), despite big government deficits. Ever since Kuroda came to power, the BOJ has been buying more JGBs than the government issues every month. As a result, the BOJ’s holdings of JGBs have risen from 11% of Japan’s GDP in early 2011 to 56% of GDP as of the end of 2015, and is set to keep on rising.

That, in turn, has sent interest rates that private investors earn on JGBs below the floor. Figure 1 shows the “yield curve,” i.e., the interest rate that JGBs pay for bonds of assorted duration, from one year to 40 years. Ever since the BOJ began “quantitative easing” in 2000, it has steadily pushed the yield curve downward.

Today, all JGBs with durations of 10 years or less paid negative rates. Even more striking is the fact that the BOJ actions have pushed the yield on a 40-year JGB to a mere 0.36%, down from 2.2% before Shinzo Abe returned to power as Prime Minister. This makes mincemeat of Kuroda’s claim that another delay in the consumption tax hike could send interest rates skyrocketing. (See below for what this means for banks, insurers and household savers.)

Only three months ago, we reported that Kuroda had pushed back the time horizon for achieving 2% inflation to the first half of fiscal 2017, i.e., March-October 2017, the third such postponement (initially, he promised 2% by late 2015). Well, Kuroda has done it again. In the “Outlook” report just issued in April, the date for achieving the target is now sometime during fiscal 2017, which ends on March 31, 2018, the date Kuroda steps down as BOJ Governor.

We think it more likely that Kuroda will have to step down without having achieved his goal. In fact, Cabinet Advisor Koichi Hamada, a Yale economist who helped create Abenomics, has publicly thrown in the towel, saying that 1% inflation would be sufficient (he speaks only for himself, not the Prime Minister, on this). 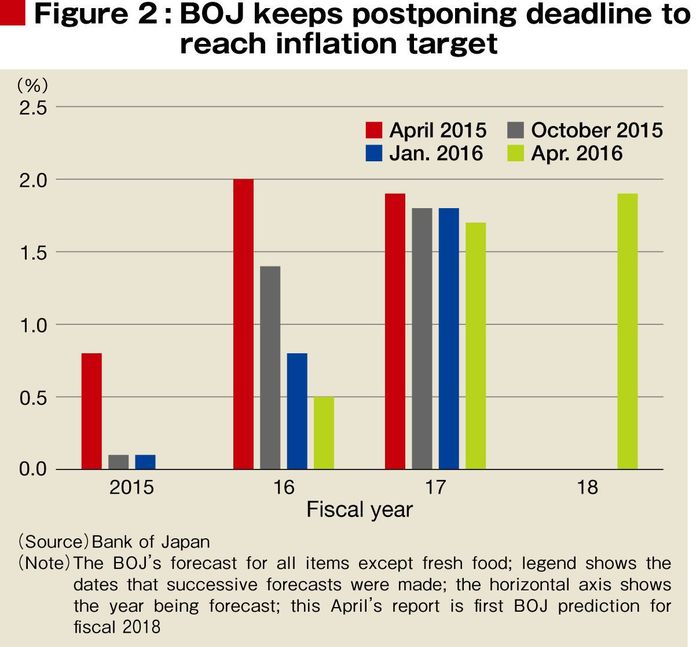 As we can see in Figure 2, the BOJ’s measure of core inflation, all items except fresh food, showed zero growth in 2015, down from a forecast of 0.8% made a year ago.

Not surprisingly, the BOJ predicts inflation will hit 1.7% in fiscal 2017, a level it has to predict in order to justify its claim that it will more or less hit its 2% target in that timeframe. We expect that, like the forecasts before it, that number will keep on dropping the closer we get to the date in question. The IMF, by contrast, sees Japan’s consumer prices rising just 1.2% in 2017. (As we’ve argued elsewhere, dropping oil prices are not sufficient to explain all these failures by the BOJ.)

From all that we can see, the push into the land of negative interest rates is not some great leap forward, but merely an incremental extension of the past policy of ultra-low rates. Most of the commentary by experts takes the same point of view.

While the benefits of Kuroda’s money-printing binge are hard to find--the depreciation of the yen helped giant exporters, but hurt consumers--the costs have been all too manifest.

Most of the JGBs were issued before the adoption of the negative rate policy and still provide a positive, if low, return as long as they are held to maturity. As time goes on and the government replaces more and more of its debt with new, negative-rate debt, then the banks and insurers will have losses rather than gains from any JGBs they hold. How, then, are banks to pay depositors and insurers pay policyholders?

(Ironically, during the process of rates going down, investors actually make money because the value of an existing bond rises in inverse proportion to the drop in rate. But, once rates have hit bottom, those one-shot gains end.)

There is also the issue of pensions. In fiscal 2015, pension fund yields were negative for the first time in five years, and falling interest rates put even more pressure on these yields. It would take a big recovery in stock prices to offset this. Then there is the growing burden on firms that have defined-benefit plans, i.e., which must pay a given amount to beneficiaries regardless of the earnings of their pension funds.

Impact on banks and savers

This poses two problems for the banks. The first, as noted above, is that, increasingly, the banks will lose money on every JGB they hold. The second problem is illustrated in Figure 3.

While deposits keep flowing into the banks, loans are no higher than they were 20 years ago. Today, the gap between deposits and loans has risen to a mammoth 200 trillion yen ($1.86 trillion), about 40% of GDP!

So, banks have scrambled to find some other way to earn money to pay even the negligible rates they pay depositors; otherwise profits will turn into losses. Up to now, JGBs have provided that alternate source of income. What are the banks to use now?

No one expects banks to pay negative rates on consumer deposits (though they may do so on deposits by large corporations). Hence, as the rates banks charge for loans keep falling, the profit margin on loans over deposits will fall proportionately.

At insurance firms, JGBs comprise 40% of all assets. These firms need the income from these JGBs to pay their policyholders, whether this be property and casualty losses or life insurance.

As yields on JGBs go down, life insurers can no longer afford the burden. In response to the negative rate regime, several life insurers lowered the annuity yield that they were guaranteeing policyholders. Some firms even stopped selling certain products. For example, Fukoku Mutual Life Insurance ended some of its lump-sum whole life insurance policies, which had offered a guaranteed 0.75% rate of return.

As the rates that insurers were able to offer policyholders kept sinking, more and more policyholders abandoned these insurers. Back in the mid-1990s, life insurance policies comprised 18% of all household financial assets. Now it’s down to 14% (see Figure 5).

So, insurers are losing on two fronts: fewer customers buying their policies and reduced earnings on those policies.

What about risk assets?

Kuroda’s reply to all of this is that this is exactly what he intended via the “qualitative” part of his policy of “qualitative and quantitative easing.” That is, as households earned less on deposits and banks could no longer earn money on JGBs, both would shift to higher return, but riskier, assets. Householders would shift to stocks and foreign currency deposits. Banks would issue more loans to firms and households and that would stimulate more spending. 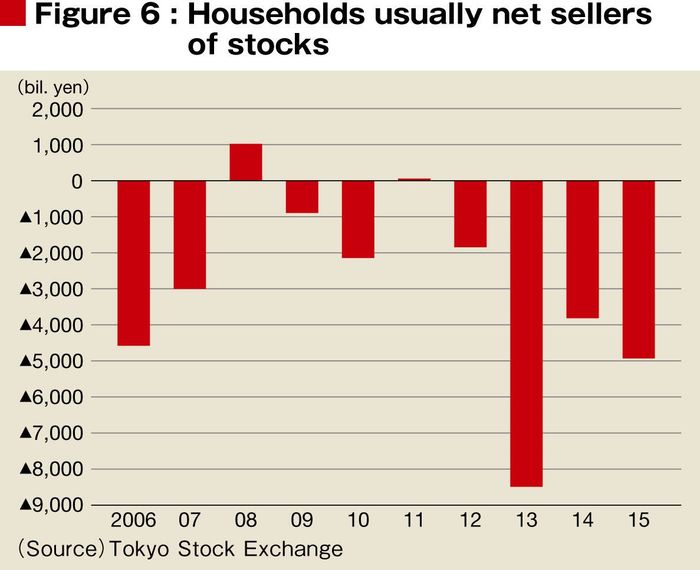 But this has not occurred. In just about every year for the past decade, householders have been net sellers of stocks. The only exceptions were 2008, when they bought on net 1 trillion yen ($9.3 billion) worth of stocks, and 2011, when they bought a negligible 50 billion yen ($467 million) in stocks. (see Figure 6).

As for banks, the flatness of their lending is not due to any reluctance on their part to lend, but the reluctance of both firms and households to borrow, even when interest rates are on the floor.

As of February, just before negative rates were announced, a record 11% of all bank loans charged an interest rate of less than 0.25%, and an all-time high of 37% charged less than 0.75%. If banks were lending out less than customers wanted to borrow, that excess demand would have pushed interest rates higher.