Did You Know About the "Good-Luck Left-Side Mt. Fuji" Seen from the Shinkansen? 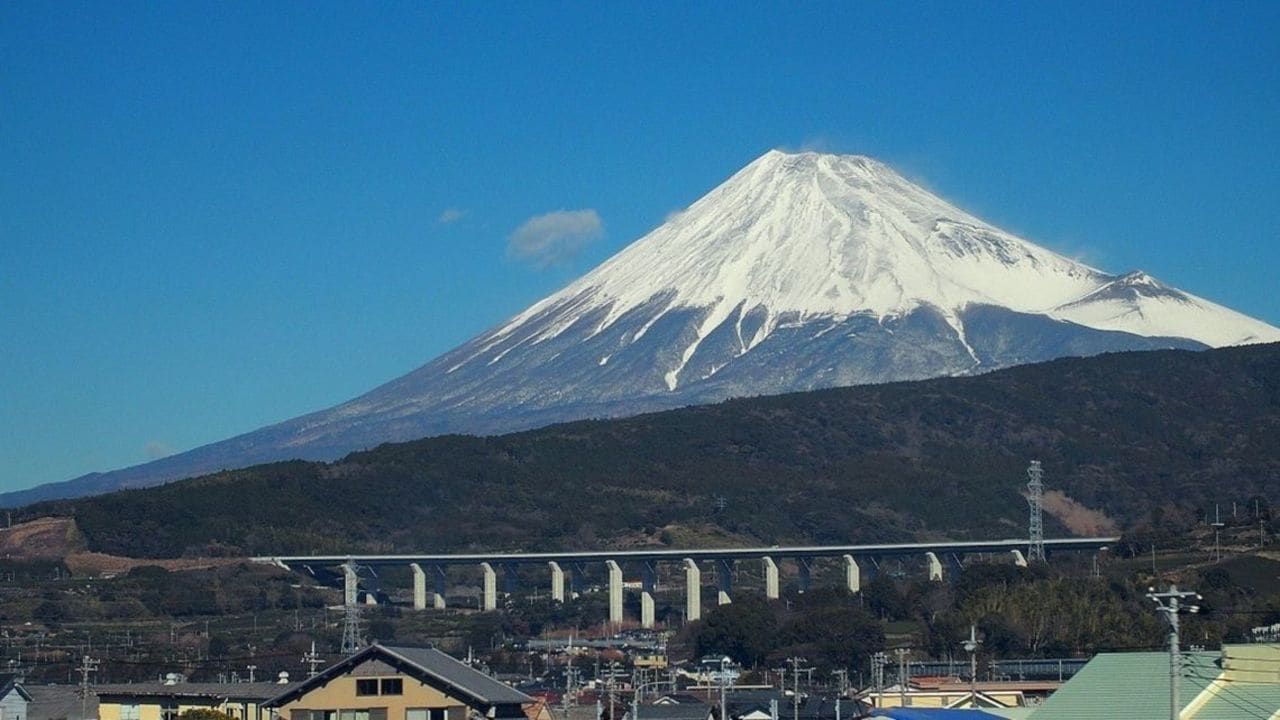 Eno-o in Fuji, Shizuoka Prefecture claims the title for most ideal location to snap a brilliant picture of Mt. Fuji.

Whether you’re heading to Osaka or Kyoto from Tokyo, Mt. Fuji is the highlight of the trip for people with a window seat on the Tokaido Shinkansen. Based on the shinkansen’s route and the location of Mt. Fuji, most people think that it can only be seen from the right side of the train bound for Osaka. However, there are times when passengers can catch a glimpse of Mt. Fuji from the left side as well.

For the most part, Mt. Fuji can be seen from inside the shinkansen between Shinagawa and Lake Hamana just past Hamamatsu. Just as the train departs Shinagawa Station, the mountain will make its beautiful debut from the E seat on the far right. If the weather is good, Mt. Fuji can be viewed near Kanagawa Prefecture’s Hiratsuka alongside other nearby mountains.

The highlight of the trip

Eno-o in Fuji, Shizuoka Prefecture claims the title for most ideal location to snap a brilliant picture of the volcano. The view of Mt. Fuji from beyond the tea fields disappears completely for an instant before reappearing a moment later. The gentle mountains in the foreground act almost like curtains framing a stage. On clear winter days, the conductor announces, “Today, Mt. Fuji can be seen clearly from the right-side windows.” Then, suddenly, the sound of photos being snapped on smartphones echoes throughout the train.

Photos taken from around this area are extremely famous throughout Japan. In Eno-o, there is nothing to block the view, and Mt. Fuji can be seen from foot to summit. The view doesn’t last forever, though; soon, factory chimneys billowing thick white smoke appear, and the train enters Shin-Fuji Station.

When taking photos from your seat, it’s a good idea to cover the speaker with your finger. If you’re using an iPhone, cover the hole at the bottom right of the home button. Also, Mt. Fuji will appear quite small, so use your camera’s digital zoom. Telephone and overhead wires will likely get in the way of your perfect shot, so you’ll want to take advantage of your camera’s burst mode.

If you’re going to take photos of Mt. Fuji from your shinkansen seat, you will get the best shots if you place the camera lens as close to the window as possible. The shutter sound of smartphones is also quite loud, so it’s polite to go out onto the deck and take photos through the train doors. You have about one minute from the first sighting of Mt. Fuji until the factory chimneys block your view, so you won’t have to rush as you exit the passenger car onto the deck.

Shin-Fuji Station’s platform is also a viewing spot. On both ends of the platform are spaces with no roof, and from there, you can see Mt. Fuji clearly. The platform bound for Tokyo is recommended. The Kodama is almost guaranteed to stop for five minutes, so take your time and walk to the end of the platform.

Upon leaving Shin-Fuji Station, the train immediately crosses Fujikawa Bridge. This is also a famous viewing spot, but if you look out the window, you’ll notice that the trusses of the bridge get in the way, and it’s a little difficult to see. 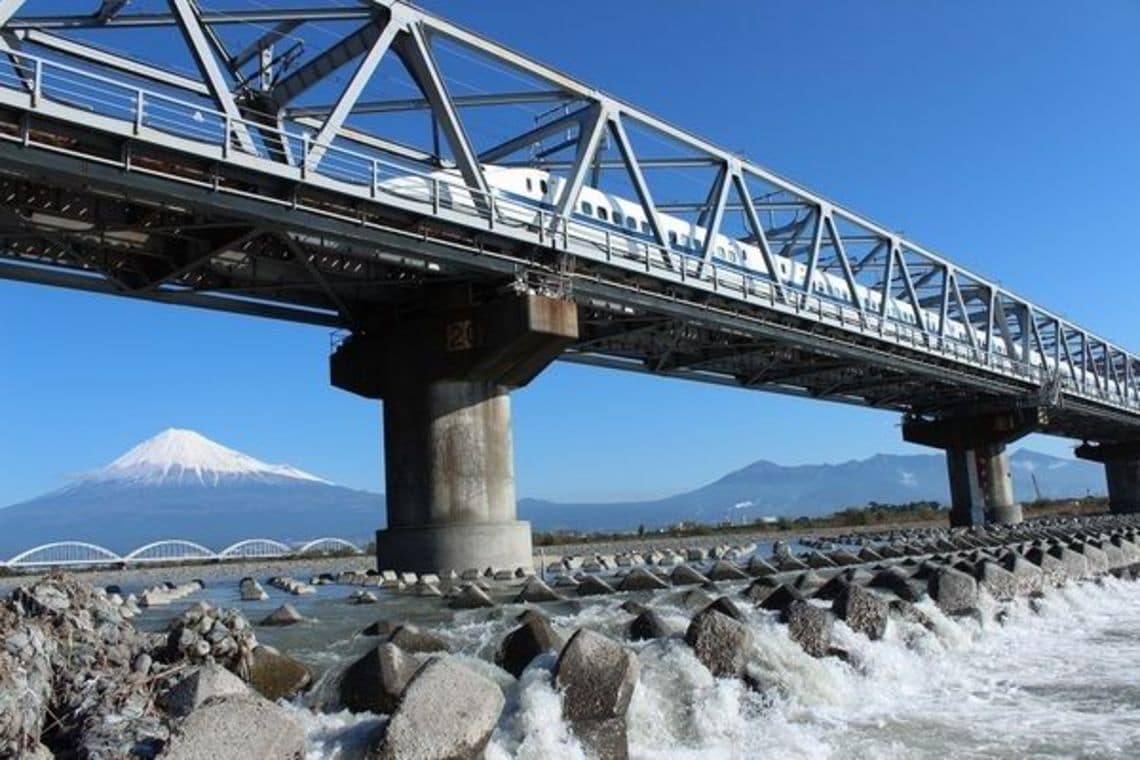 However, Mt. Fuji as seen from across the magnificent flow of the Fujikawa River is an exquisite treat. If you’re going to shoot with your smartphone, it’s difficult to avoid the trusses, so it’s recommended that you take video instead.

January has the most clear days for seeing Mt. Fuji from the shinkansen, while the rainy season (which peaks in July) has the fewest. Winter offers the highest odds of seeing Mt. Fuji clearly, and November through the beginning of March are recommended. After mid-March and through summer, the temperature will rise, making the summit difficult to see due to fog. However, you can still get a beautiful view in the early mornings when the air is clear.

Once you cross the Fujikawa River, Mt. Fuji disappears from view as the train enters a hilly area. After that, the train heads into the Shizuoka city area, which is full of obstructive buildings. Thus, Mt. Fuji can rarely be seen before or after Shizuoka Station.

However, there is one more short viewing area after leaving Shizuoka Station; the train passes over the Abekawa River, and immediately after crossing, you’ll have about 30 seconds as the shinkansen heads straight south. From the far left A seat (in other words, from the ocean-side window), Mt. Fuji will appear. 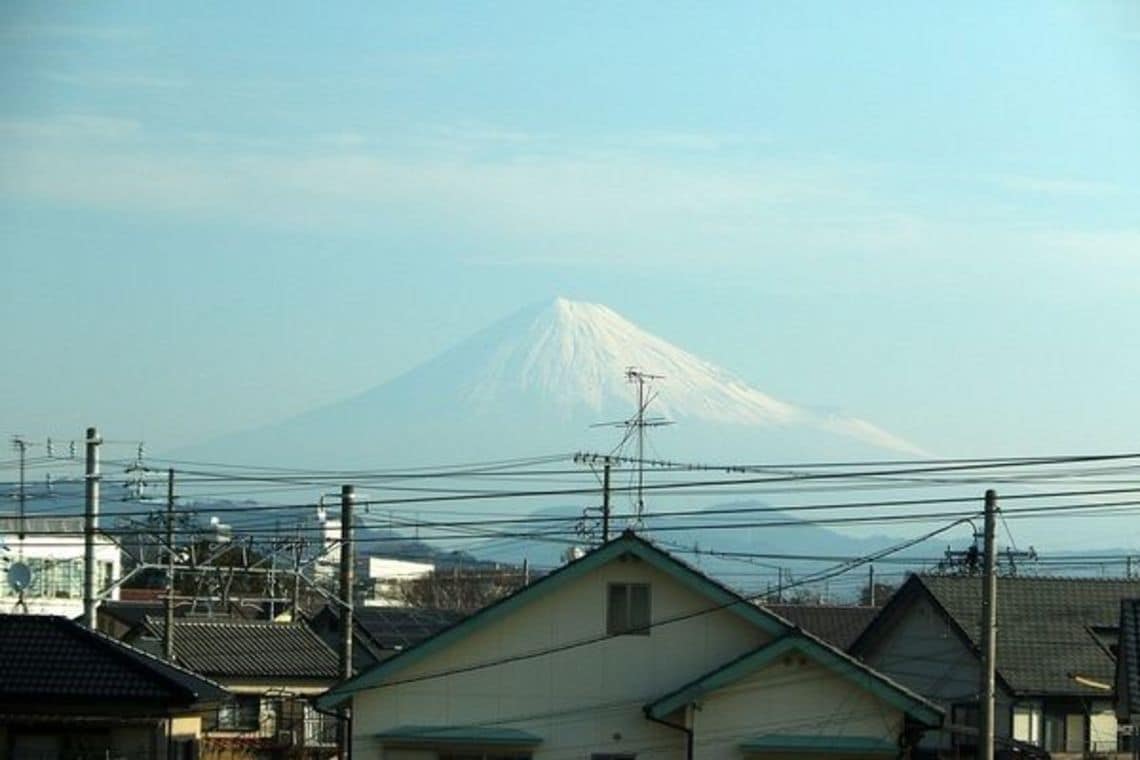 On the Tokaido Shinkansen, this is the only spot from which you can see the “left-side Fuji.” On an Osaka-bound train, Mt. Fuji will show itself for just a moment and then immediately falls away, so unless the weather is good and you pay close attention, you’ll miss it. Because it’s so easy to overlook from this spot, it has been called the “good-luck left-side Fuji,” because it is said that it will bring you good fortune if you manage to see it.

Once the train passes the left-side Mt. Fuji, it is time to say goodbye to this iconic mountain. However, on a clear winter day from the train window, as the shinkansen passes Lake Hamana, you can see Fuji pop its head just a little bit over the lake. This author has only seen it once and has yet to successfully photograph it.

Mt. Fuji is one of the biggest attractions on the Tokaido shinkansen. However, there is no guarantee that you’ll see it every time. From this time of year onward, consider spotting it a test of just how good your luck is.