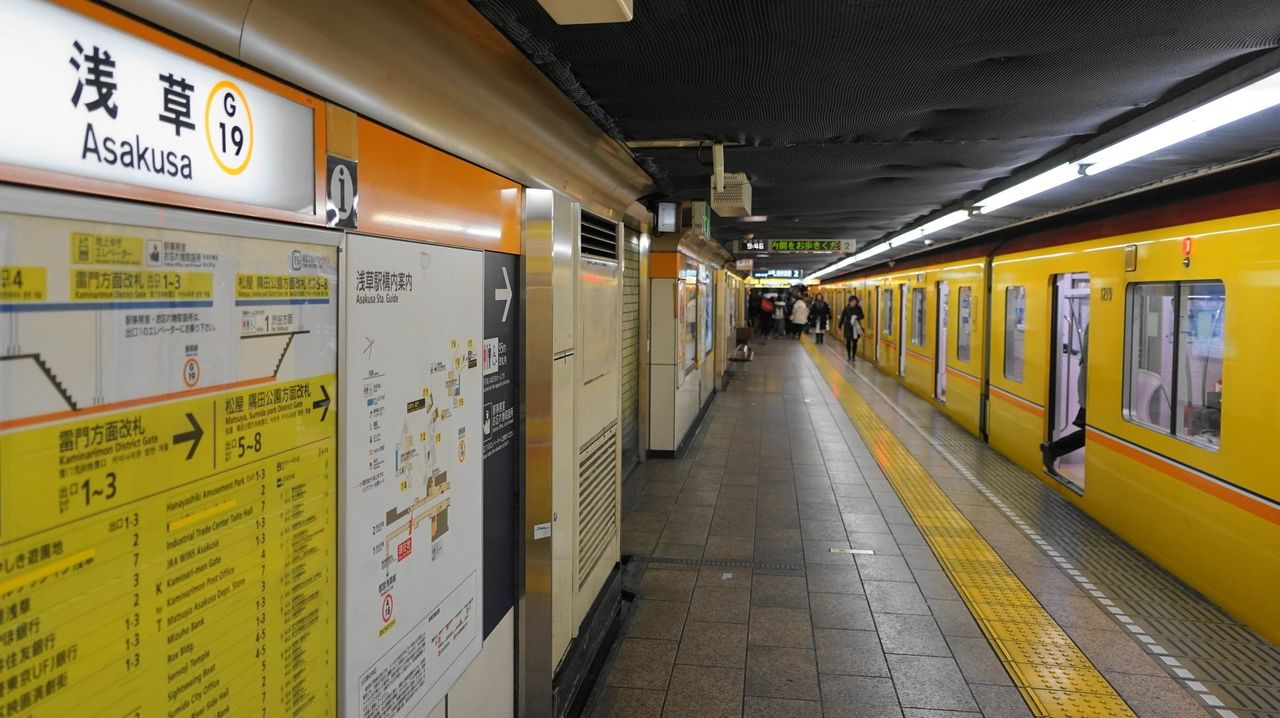 Asakusa station is one of the hardest stations to get around. (Photo by i-flower/PIXTA)

Need a map to change lines

Close to the bridge crossing the Sumida River 3 train lines intersect: the Tobu railway line, the Ginza Line (orange) and Toei Asakusa subway line (pink). Complicating things is another “Asakusa station” for the Tsukuba Express (TX) which opened in 2005. In fact, the Ginza Line`s Tawaramachi station is closer to TX Asakusa station than the Ginza Line’s own Asakusa station. It is so far between both stations that it takes almost eight minutes to walk the distance.

This is the nearest station to Waseda University. Yet the Tokyo Metro subway Tozai Line and the streetcar Toden Arakawa Line are at a completely different locations. To get to the Toden Arakawa Line after exiting the Tozai Line you have to walk past Waseda’s Okuma Memorial Hall, go down the street and walk to Shin Mejiro street. It takes at least 10 minutes on foot even without getting lost.

You will have to take a short walk when you change trains at Ryogoku station. The closest exits between the Toei Oedo Line (magenta) and the JR Sobu line are about 400 meters apart.

Once out of the subway of the Oedo Line, walk southward alongside Kiyosumi street, soon you will see the girder bridge of the Sobu Line. Walk under the bridge and head west until you see the east side of JR Ryogoku station. At a normal pace it’s about a four minute walk. To get to the main entrance on the west side you must walk another 2 to 3 minutes.

North of Ryogoku station is Kuramae station on the Oedo Line. When you transfer from the Oedo Line to the Asakusa Line platform you must go outside and cross a busy road. There are plenty of signs so you will not get lost. But on a rainy day, walking 200 meters outside to another train line can be a nuisance.

A lot of going up and down

While you don’t have to go through a ticket gate to change trains, it still can be troublesome to change to another line. The platform of the Marunouchi Line (red) is above ground on top of a girder bridge. Meanwhile, the newer Namboku Line (emerald) located 6 floors underground. So you better be prepared to go up 8 floors when transferring to the Marunouchi Line.

Here too changing subway lines is complicated. The Ginza Line is on the third floor above ground, while the Fukutoshin Line (brown) is on level five underground. The Hanzomon Line (purple) also comes into Shibuya. At the same time, the Tokyu Denentoshi railway line shares the Hanzomon platform. The Tokyu Toyoko line also shares the same platform as the Fukutoshin line. If you are changing trains at this station for the first time it can be confusing finding your way through the station.

The JR Yamanote Line and Saikyo Line’s Shonan Shinjuku Line’s platforms are very far apart. Unless you plan to take the express train from Shibuya, it’s probably better to change at Ebisu or Osaki station.

Enormous, busy and chaotic, Tokyo station is exhausting to navigate from the Sobu Line express and Yokosuka Line platform to the shinkansen bullet train platform on the Yaezu side. Not only are they far but you must weave your way through thick crowds.

If you are heading to Chiba from Kansai avoid changing trains at Tokyo station. When you change trains at Shinagawa you will have a better chance of getting a seat on the Sobu express line.

Making your way through the crowds

Tokyo Metro Ikebukuro subway station has three lines: the Marunoichi Line, the Yurakucho Line (gold) and the Fukutoshin Line. These lines are scattered so far apart that making a connection to another train is a hassle. If you’re changing to the Yurakucho or Fukutoshin lines, it is better to use a station other than Ikebukuro.

Located in Tokyo’s business center, Otemachi station is the largest subway station in Tokyo and is serviced by five subway lines. If you need to change from the Marunouchi or Hanzomon lines to the Tozai Line (sky blue) you must once exit the ticket gate, cut through the underground shopping area and re-enter different ticket gate. Rush hour is chaos and it takes time to make your way to another train line.

10 Useful Tips for Changing Trains to Get Around Tokyo