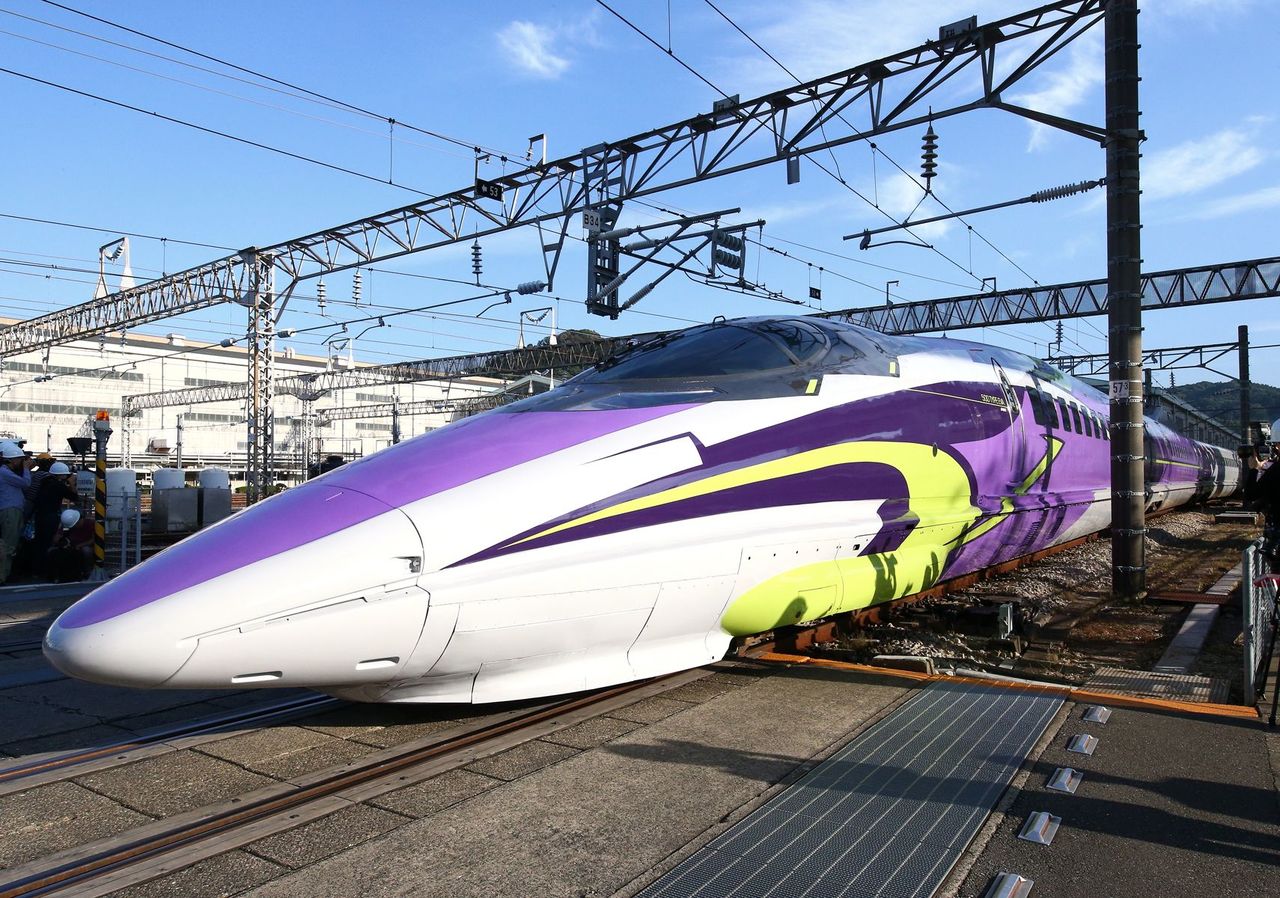 Ikuto Yamashita, who worked as the lead mecha designer in the Eva series, is responsible for the design of the Evangelion Shinkansen. (Photo by Fumishige Ogata)

The Eva Shinkansen Project started in the autumn of 2014. Planning for 2015, the 40th anniversary of the Sanyo Shinkansen run from Shin-Osaka to Hakata stations, resulted in the Evangelion-inspired 500 series Shinkansen.

Immediately after talking with Khara, the studio responsible for producing the Evangelion anime series, talks proceeded smoothly for the airing of the 20th anniversary of the television series this year, and the dream of collaboration became a reality.

Ikuto Yamashita, who worked as the lead mecha designer in the Eva series, is responsible for the design of the Evangelion Shinkansen, while series creator and general director Hideaki Anno served as a supervisor.

"I would like to be able to make a 500 series train from the future that takes advantage of the original design as well as having Eva-type coloring,” says Yamashita, who is also a big fan of the 500 series Shinkansen.

For the exterior, even the lead car itself was painted separately in five colors: pale purple, deep purple, yellow-green, red and gray. These were the colors used on Eva Unit 01, which plays a central role in the series. 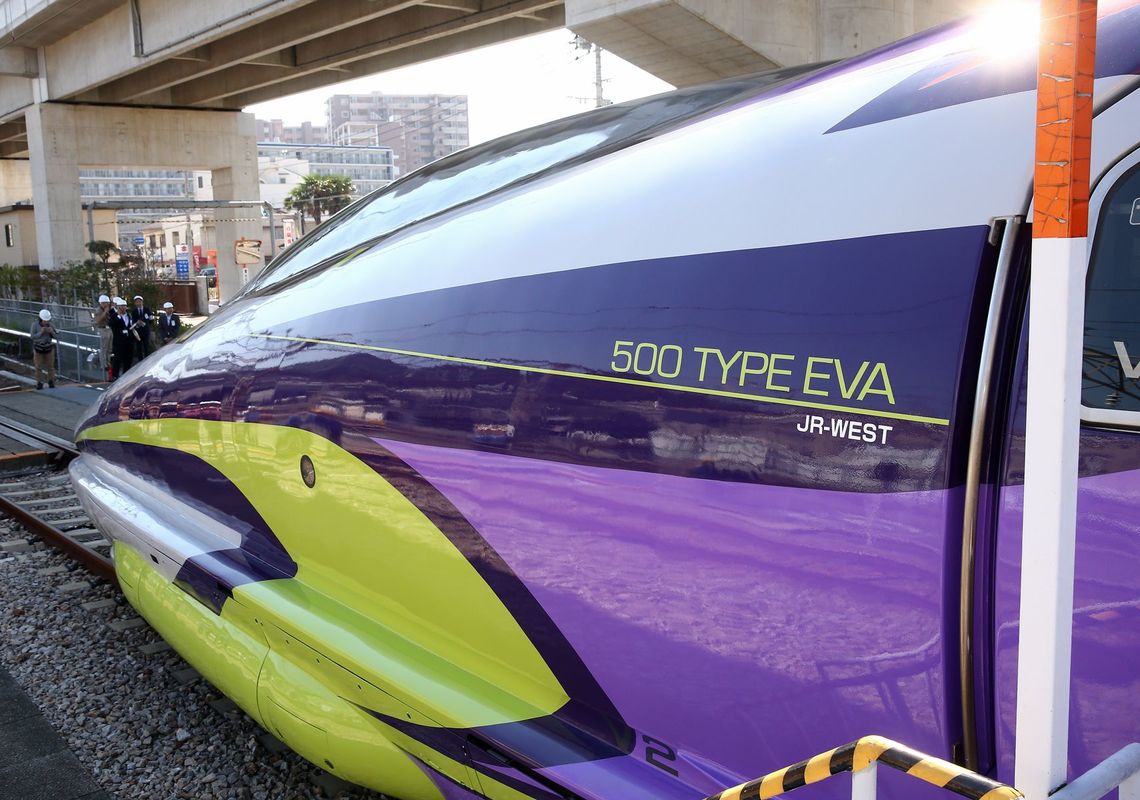 There was also the option of pasting the entire surface of the train with film, but since there is a possibility that the film might peel or come loose in places with a lot of aerodynamic drag, all of the cars were finely painted over a period of more than a month.

Only the anime series designers worked on this project, and the completed vehicle certainly looks like the image of Eva Unit 01. However, the mechanisms and markings such as those that appear in the original story are not affixed to the vehicle body. Only the lead car has ‘500 Type Eva’ marked on it.

It is likely that the exterior is designed like this because the train would more likely be subject to regulation as an ‘outdoor advertisement’ if the train body itself is recognizable as part of Evangelion.

Even if it is temporarily seen as outdoor advertising, it would become impossible to run the train without having to clear all of the regulations in different municipalities. For this reason, it was necessary to create a design that is not regarded as advertising when viewed from the outside.

Although the finished train matches the world of Evangelion from any angle, it is not a direct representation.

Experience the world of Evangelion

On the other hand, the inside of the vehicle is bursting with the world of Evangelion. There is a special Exhibition Room in the first carriage, and only those who make reservations in advance can enter. When entering the life-size cockpit, a monitor projecting the view from the front of the Shinkansen is projected. 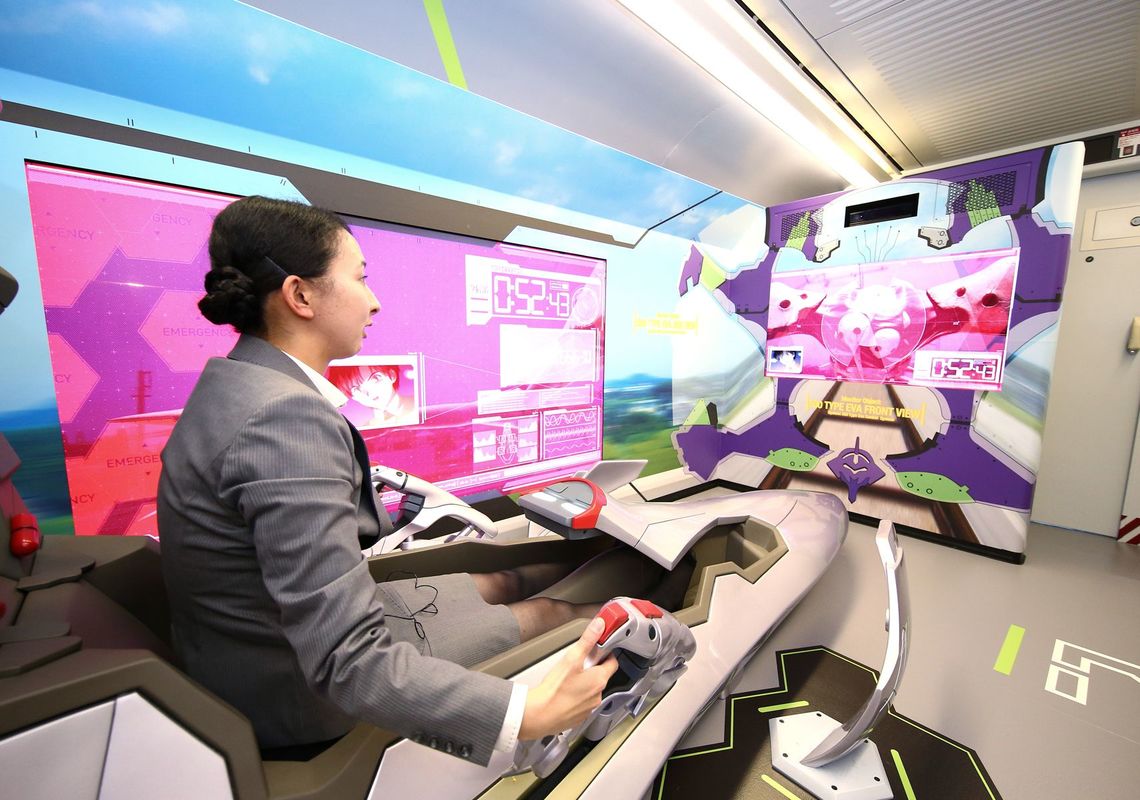 Don't underestimate this train, expecting something out of the popular train simulation game "Densha de Go! Suddenly," expecting an attack by an Angel (supernatural beings, the enemy that appear Evangelion), Eva Unit 02, operated by the female pilot Asuka Langley Soryu (Shikinami), runs in parallel. This video is compelling.

In addition to this, panels of characters that appear in Eva will be exhibited. These will periodically be replaced with other characters from the series.

An Eva diorama will also be on display, and if you look very closely, you will be able to see many Eva characters. 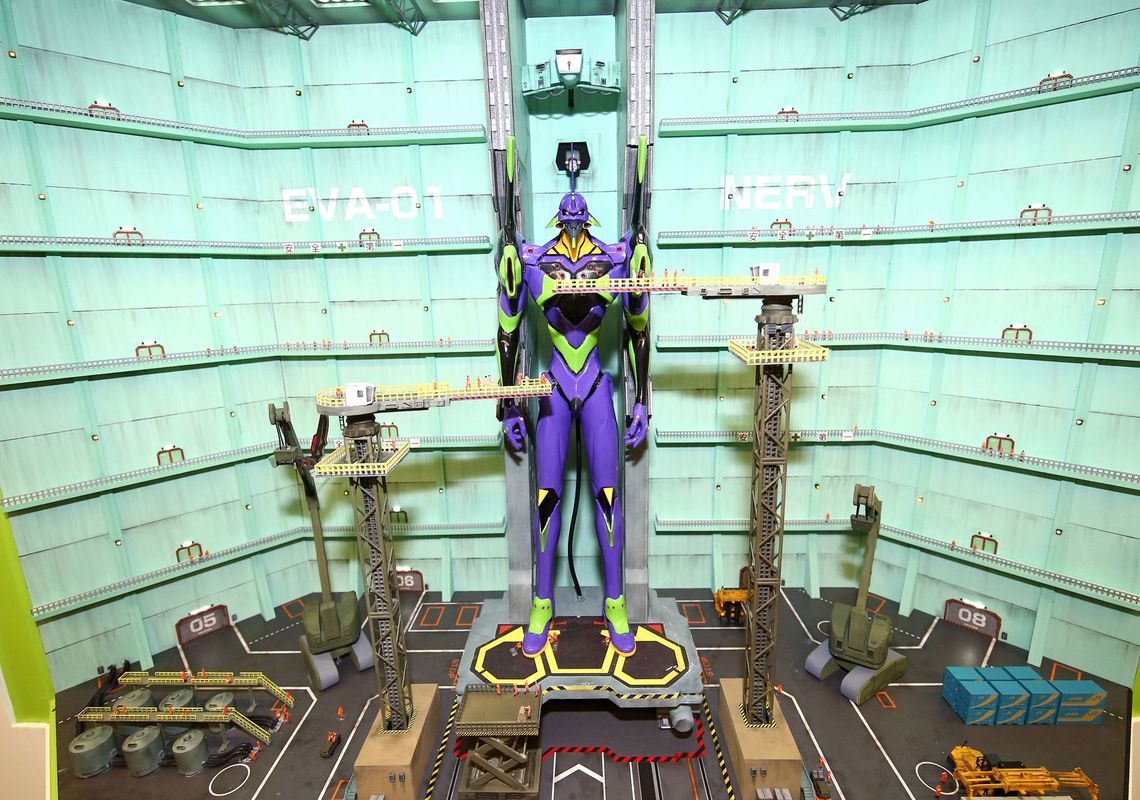 The second carriage will offer non-reserved seats and feature a special Eva-themed interior. Reservations aren't required and anyone can sit in these seats. The mark of NERV, the secret military organization that runs Eva in the series, will mark the aisles and side walls, and some of the window blinds have designs of Commander Gendo Ikari and A.T. Field, characters in the series. 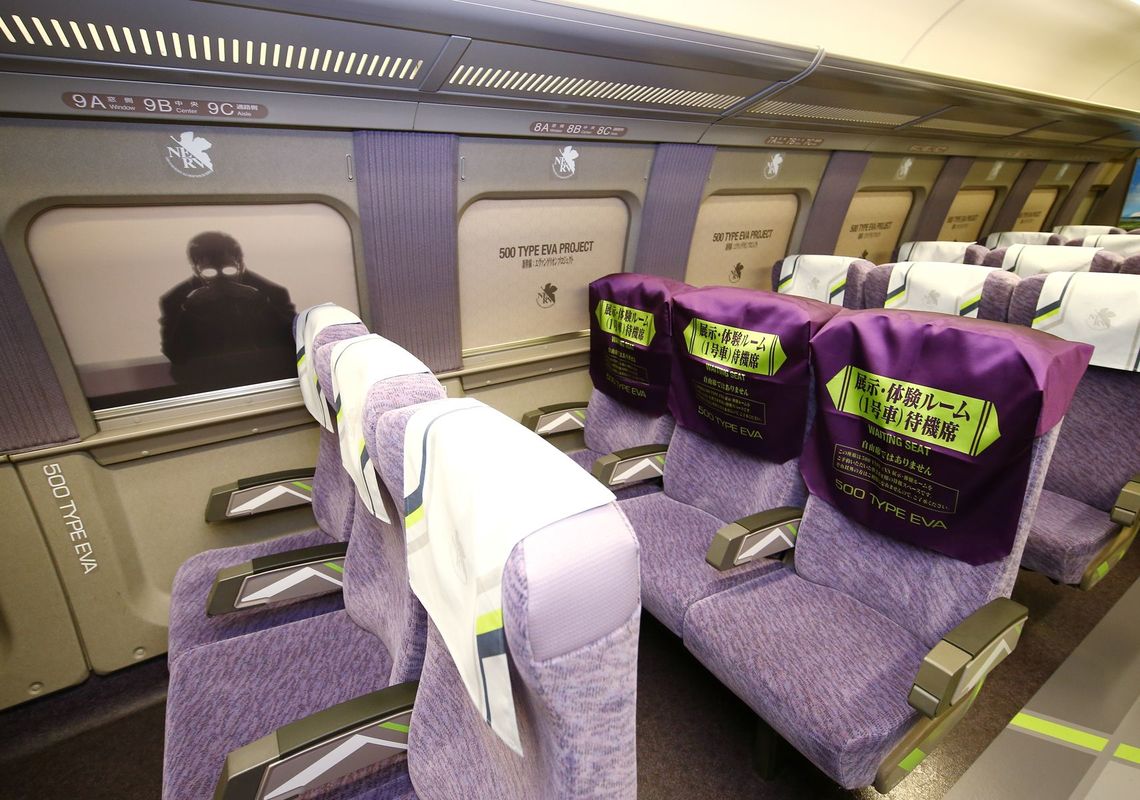 Although apparently no special changes have been made to carriages three through eight, the aisle doors in carriage three have a large specially designed ‘3’ logo. Don't miss the opportunity to ride this train if you have the chance.

In addition, take a peek into the smoking room in carriage three, even if you don’t smoke, because you may come across Ryoji Kaji or Ritsuko Akagi, two characters from Evangelion, having a cigarette. 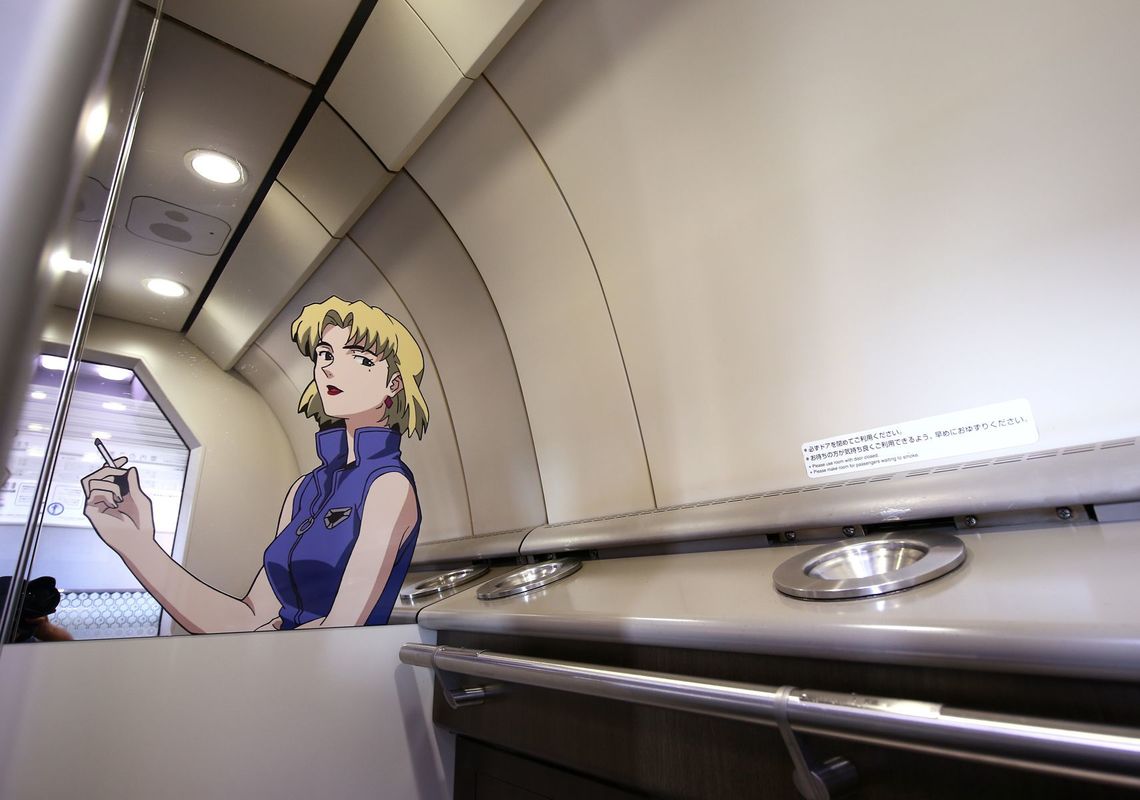 Two to three attendants will ride the train, and it seems their costumes may be very elaborate.

The 500 Type Eva will begin service on November 7. Since the train will run on the Kodama timetable, it will stop at every stations, but Eva fans will sprint to the figure of Eva Unit-01.