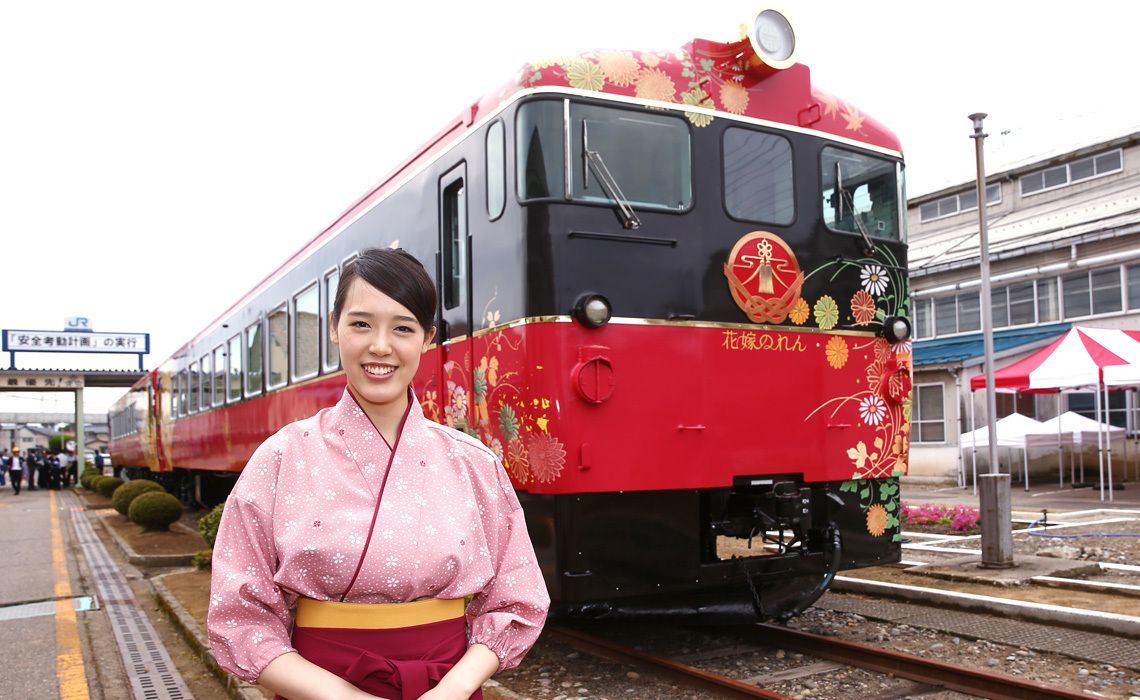 Hokuriku has been drawing a lot of tourist attention, especially since the recent launch of the new Shinkansen line bound to Kanazawa, the biggest city in the region. To further spur the tourism boom, a new sightseeing train is going to start running between Kanazawa and Wakura Onsen from October 3.

The name of this train is “Hanayome Noren”.  Hanayome means bride, and noren is a short split curtain you typically find hanging in front of a traditional Japanese store or restaurant.

In the Hokuriku region, it has been a tradition on the day of a wedding to hang a special noren at the entrance of the room of the groom’s house where his family Buddhist altar is enshrined. This curtain is prepared solely for the bride to pass through it, and pray to the groom’s ancestors in front of the altar before she proceeds to the wedding ceremony.

The new sightseeing train composed of two carriages has been designed under the motif of this traditional process performed on the day of the festive lifetime event in this region.

For the past few years, uniquely designed sightseeing trains have emerged in various parts of the country to help boost the local tourism. JR West Japan Railway, the operator of Hanayome Noren, has also been successful to this end. Its past achievements include an eye-catching train that looks like a ship from the outside and a nostalgic train that pays tribute to a famous local poet.

The design of Hanayome Noren is filled with surprises too. Externally, the train carriages have been painted to appear as multi-tiered boxes used in Japan to keep the feasting food specially prepared for the New Year’s. 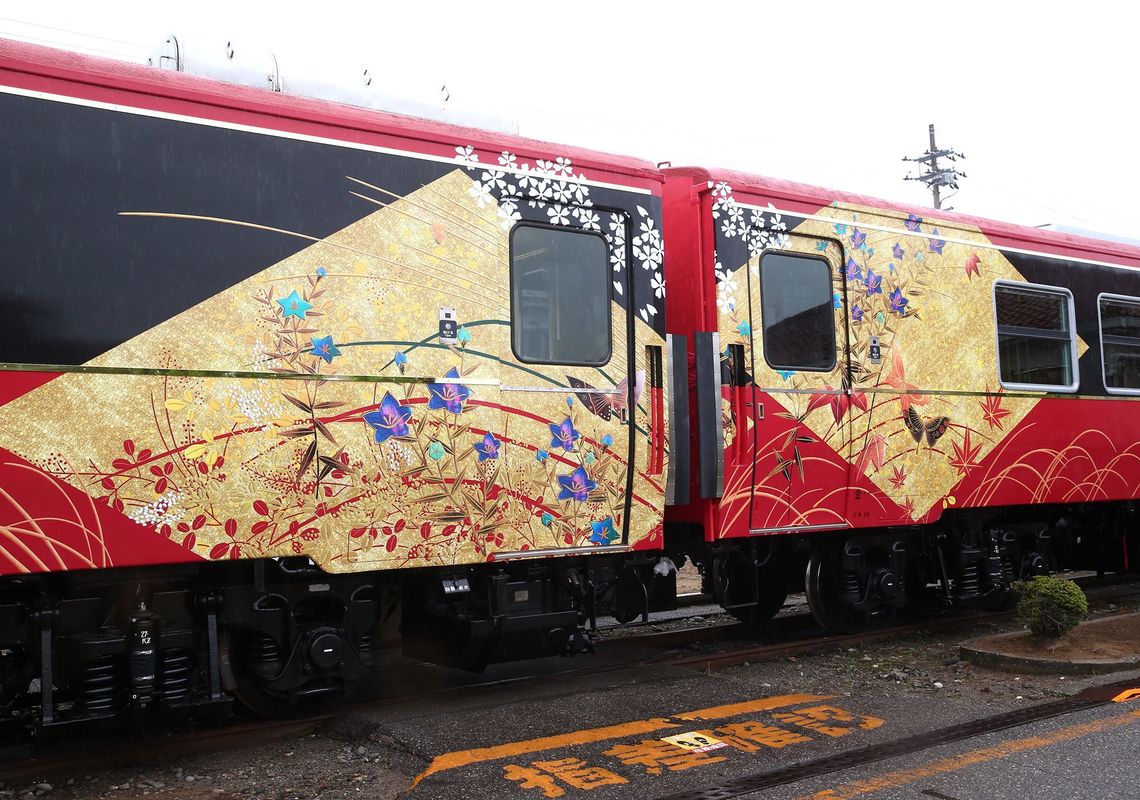 As the base coating, red and black paints have been used to resemble the sublime local craftwork, Wajima lacquerware. On top, flowers and butterflies are drawn elegantly in a pattern that can be easily associated with that of Kaga Yuzen kimono, another famous cultural asset of Hokuriku. 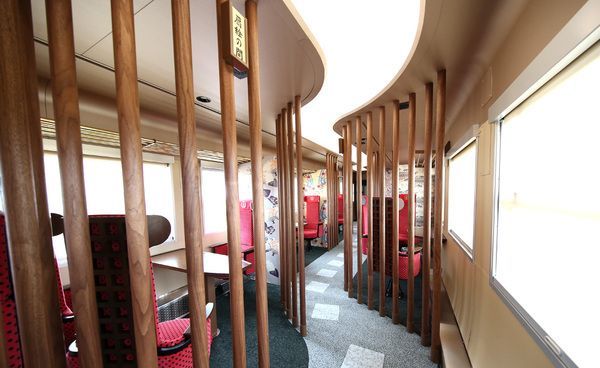 The interior of the two carriages (No. 1 and No. 2) have been designed to look completely different.  In the first carriage, the seating area is split into eight semi-private rooms, each separated with a lattice that reminds you of a Japanese-style room in a typical traditional hotel known as ryokan.

The carpet laid on the pathway between these semi-private rooms also has a ryokan feel. It features a pattern of stepping stones like the kind you see in a Japanese garden. 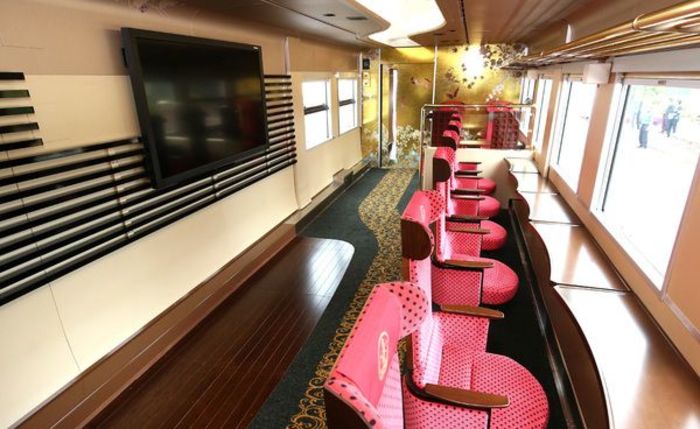 The second carriage, on the other hand, has an open space for events in the center with a large liquid-crystal screen hanging on the wall. According to JR West, the idea to create such open atmosphere derived from the “concept to enable the passengers to enjoy their journey cheerfully like in a party.”

The essence of Japanese hospitality 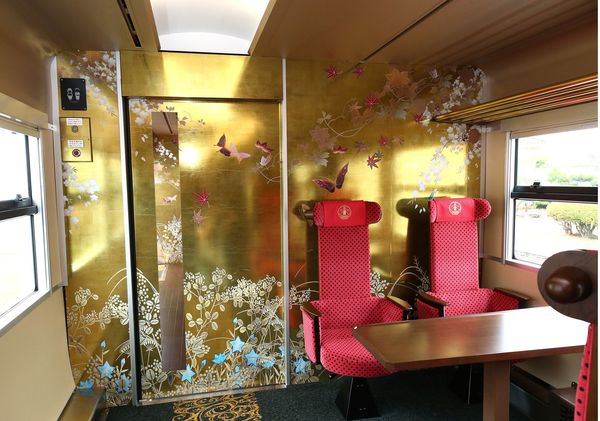 Another selling point of this train is the highly sophisticated in-carriage services. The food served in the cabin is supervised by the grand chef of Kagaya, a five-star ryokan in Wakura Onsen, the destination of this train when riding from Kanazawa.

Not only that, JR West employees assigned to work as the cabin attendants have also received a special training from this prestigious Japanese hotel. Yoshihiko Oda, President of Kagaya, says he is enthusiastic about coaching them “the true hospitality filled with the kindness and warmth rooted here in the Noto Peninsula.” 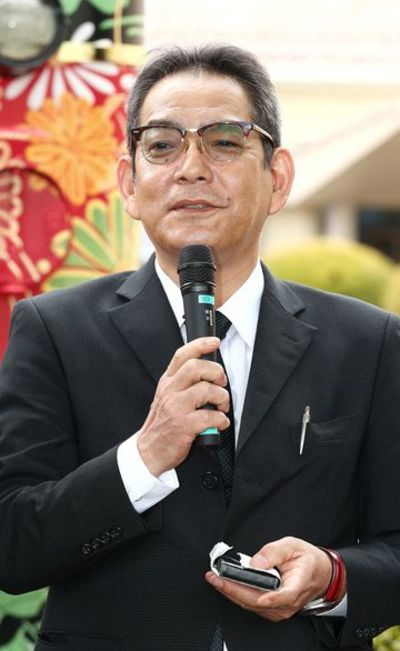 The aesthetic appeal of Hanayome Noren’s interior was designed by Shoji Inoue. Unlike any normal train carriage, he deliberately avoided the use of symmetrical patterns. Not only are the corridors curved, but the lightings on the ceiling are also non-linear. “I wanted to convey the image of walking through the narrow winding alleys often seen in Kanazawa,” explains Inoue.

He reveals that he wanted to make this train look “even more brilliant than the sightseeing trains developed by JR Kyushu Railway.”

From the early 1990’s, JR Kyushu has been introducing sightseeing trains of unconventional designs one after another. Without exaggeration, it has been and still is regarded as the top operator in the country in the genre of sightseeing trains.

To realize the grand design filled with his playful imagination, Inoue had to fight through a series of heated discussions with the train constructors. For example, he was originally thinking of laying real stepping stones on the carpet he designed for carriage No.1. But this idea was rejected for the reason that real stones were too heavy for the facility load equipped in a passenger train carriage.

After contemplating over various alternative plans, Inoue finally made up his mind to go with one of the most strenuous options. He decided to draw naturally shaped stones one by one on the carpet to make the floor look like an array of stepping stones in a Japanese garden.

The construction project required repeated negotiations between the stakeholders to come to fruition. There was a need to find the thin middle ground where Inoue’s playful spirit and the train constructors’ strong awareness on safety could both be satisfied.

Inoue seems content about the outcome of this long struggle to strike the right balance between his ideal imagery and practical requirements that had to be met. He proudly says, “As you can see, there are so many picturesque spots in these carriages that would strongly motivate the passengers to take commemorative photos.”

JR West has selected existing diesel train carriages to be used for Hanayome Noren, so that it can run on other lines and routes as well. The company has not yet disclosed the total cost required for this remodeling.

Similar references in the past suggest that approximately 80 million yen would be necessary to convert an existing two-carriage railway runner into a sightseeing train. It is quite likely that Hanayone Noren turned out to be a more costly investment, considering the extra fine details of its design and services.

JR West’s aggressive capex project, however, does not stop here. On October 10, another sightseeing train named “Belles montagnes et mer” (meaning “beautiful mountains and sea” in French) is also marking its debut on a scenic route in Toyama Prefecture.

Needless to say, the addition of Hanayome Noren and Belles montagnes et mer will greatly enhance the lineup of sightseeing trains in the region from this fall. But more importantly, it will certainly guarantee Hokuriku the role to remain a strong magnetic field for tourists and railroad fans for quite a while.