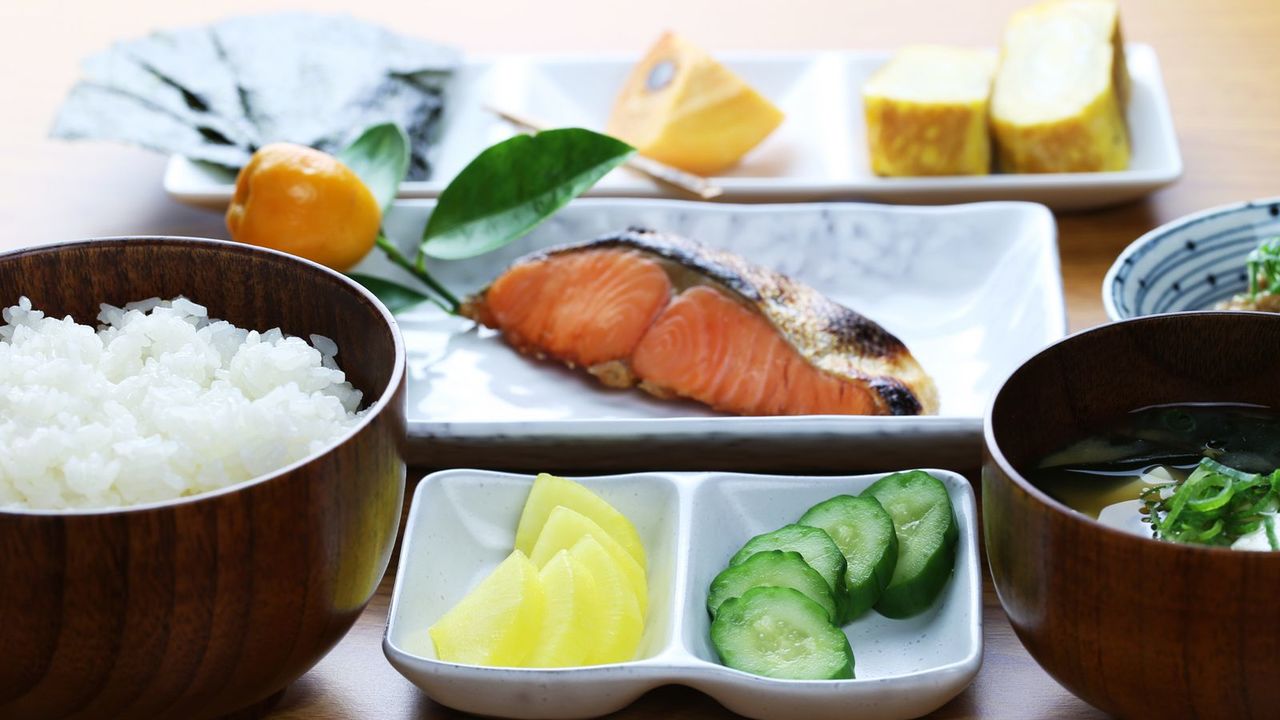 (Zester Daily/Reuters)--I consider breakfast to be the most important meal of the day. Most mornings, I cook a Japanese breakfast because that’s what my family prefers.

It consists of miso soup and a protein dish of fish (sometimes leftover grilled salmon from the night before), eggs or tofu. They are accompanied by a bowl of steamed rice or toast, with a crisp piece of nori seaweed on top, and for sides, I plate small portions of fermented foods — tsukemono (pickled vegetables) and natto (fermented soybeans), which is a strong food that can be an acquired taste for Westerners because it is stringy and stinky like cheese. I also serve fresh fruit with a dollop of yogurt and might also have a shot of apple cider vinegar, sweetened with a little honey.

If you are invited to my house for breakfast, you might actually think it’s dinner; it’s a hearty spread indeed. I also make a Western-style breakfast of buckwheat galettes and whole-wheat pancakes or stone-cut oatmeal with maple syrup, but whenever I go in that direction, I still try to include our Japanese breakfast favorite — miso soup.

A bowl of soup with vegetables from the land and the sea and seasoned with miso has a way of ensuring a healthy balance in our diet. Here are ways to integrate the Japanese breakfast concept into your daily cooking.

Eat some type of fermented food every day

In the traditional Japanese breakfast, fermented foods such as miso, soy sauce, vinegar and koji salt made from fermented grains have been used as staple seasonings, and tsukemono (pickled vegetables), umeboshi (pickled plums) and natto (fermented soybeans) have been eaten since ancient times. The practice of fermentation was born out of necessity to extend the life of foods when refrigeration was not readily available. 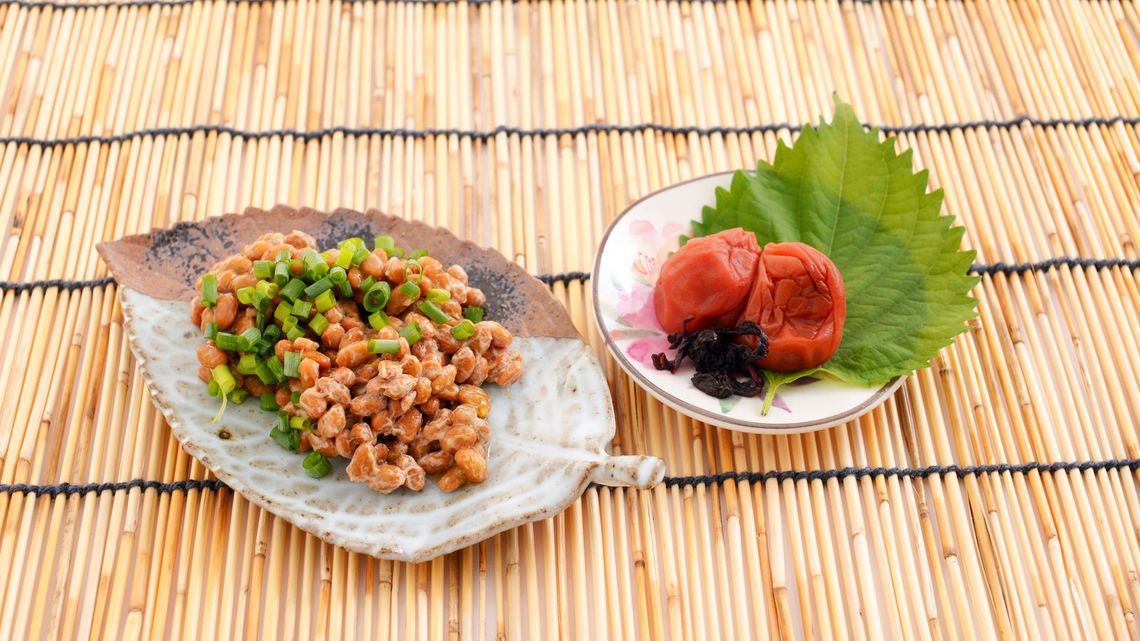 The benefits of fermentation go beyond preservation. It is convenient to stock your pantry with fermented foods because they are ready-to-eat “cooked” foods, but they also aid in digestion and some are considered medicinal. There is an old Japanese saying that “an umeboshi a day keeps the doctor away.”

A similar saying goes for miso. “If you eat miso soup on a daily basis, you don’t need a doctor.” In modern times, fermented foods continue to be a popular breakfast staple. The Japanese have also adopted Western fermented foods such as yogurt into their breakfast regimen. Eaten in moderation, fermented foods keep the intestinal flora healthy.

A variety of dishes in small portions

The fundamental difference between an American breakfast and a Japanese one is not only its makeup but also its serving sizes. I remember when my mother took us to Big Boy when we first moved to Los Angeles from Tokyo. Half a cantaloupe with a maraschino cherry was offered as a single serving. I was surprised because a half a melon can serve an entire family in Japan.

A typical American breakfast can include two to three eggs scrambled, two to three pieces of bacon or a thick sausage patty or slice of ham, with maybe three stacked pancakes dripping with butter, or French toast or muffins or sugar-glazed doughnuts and so forth.

Such an American breakfast is loaded with sugar and fat. In contrast, the Japanese breakfast is about serving a variety of foods in smaller portions. How you want to feel at the end of the meal is hara hachi bu — 80% full, not stuffed. My grandmother, who lived to 102 years old, made breakfast her biggest meal of the day, but always left room in her tummy so she could start thinking about what to eat for lunch. That was her secret to longevity.

Create contrast in your presentation

Flavor, color and knife skills are important in Japanese cuisine, and that applies to breakfast too. Even if you don’t have time in the morning, each dish should be beautiful. If you are using chopsticks for eating, the foods when served should not require cutting with a knife; they must be uniformly bite-size morsels. Irregularity of size can make them harder to eat and less appealing.

In color choice, if you begin with something with white like tofu or daikon radish in your miso soup, something of a bright color like red will enhance it (carrots, red pepper), and a few green herbs will brighten the soup. No meals should be all white or all green or all brown. This also makes sure you are eating more than one vegetable.

Awaken your taste buds in the morning by eating a variety of foods in moderation. Use a combination of sweet (fruit), sour (a salad or citrus fruit or vinegar), salty (pickled foods) and bitter (coffee and green tea). The fifth taste, the umami flavor, is satisfied when you are serving miso soup — made with konbu seaweed, bonito flakes or shiitake mushroom; a meat stock; or serving some kind of umami-rich protein dish, such as grilled fish. Occasionally bacon is OK too.

Because a Japanese breakfast is largely butter-less, spice-less, sugar-less and sauce-less, the ingredients themselves must be flavorful and fresh. Greens must not be bruised or wilted. Fruits should be eaten in season. Visit the farmers market often. Make a fetish of freshness.

Once you have prepared a Japanese breakfast, the creative kitchen work and the deliciousness of the food will probably modify your regular American breakfast. You may cut down on fat- and sugar-loaded cereals and pastries. You’ll discover that whole grains; meat and fish; vegetables, both fresh and fermented; and fruit eaten sensibly can turn your breakfast into a feast. You will be a leaner and happier eater.

Koji Marinated Salmon (Serves 2 to 4)
Ingredients
2 salmon fillets, 6 ounces to 8 ounces each
2 tablespoons shio-koji
Directions
1. Spread the shio-koji on the salmon fillets.
2. Marinate for 1 to 2 days in the fridge.
3. Before cooking, rinse off the shio-koji and wipe off any koji residue with a paper towel.
4. Broil the salmon fillets until they are lightly toasted and the meat flakes off easily with a fork. Be careful not to burn the fillets. Serve with lemon wedges.