Did You Know That Once a Year There's a Non-Stop Yamanote Line? 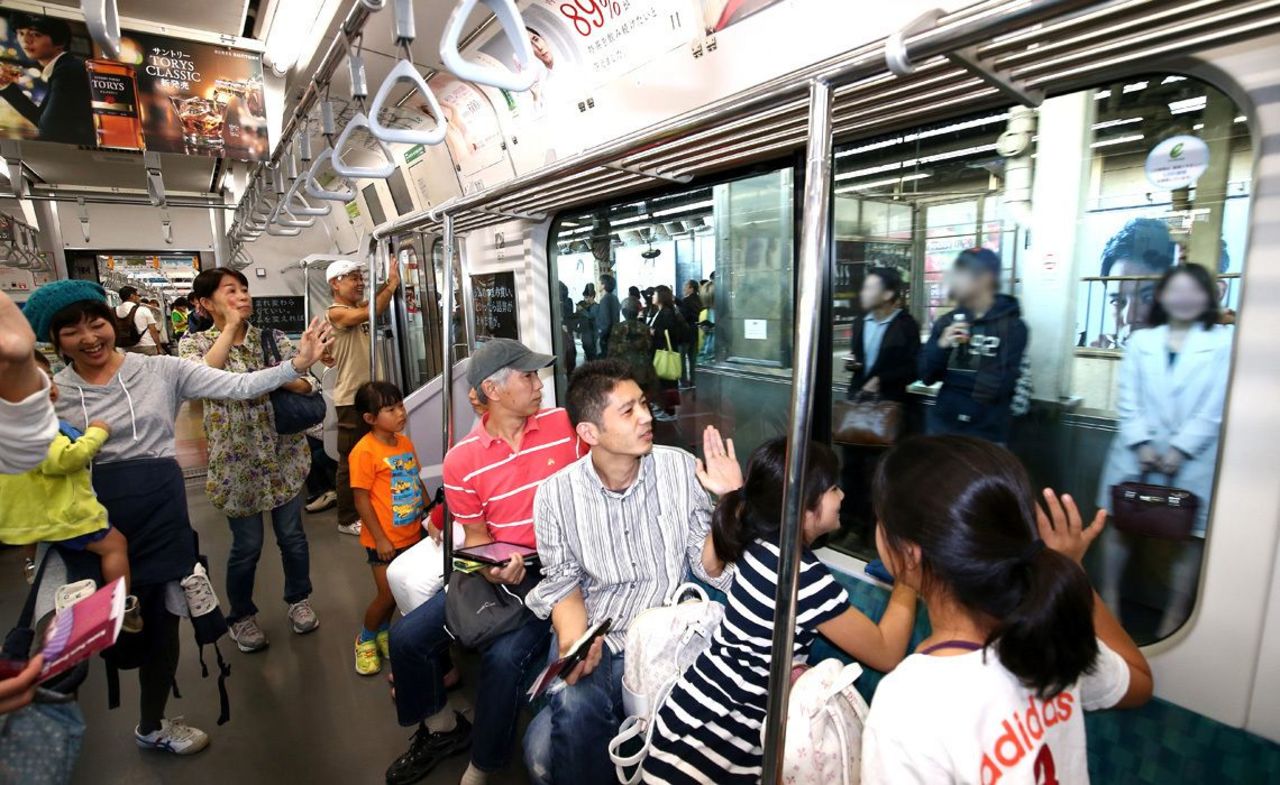 Did you know that there's a non-stop Yamanote Line? If you saw what looked like a deadhead full of passengers waving at you while you were standing on the platform, you would certainly do a double take.

This train is the reservation-only Yumesanbashi. It is the highlight of the annual Shinagawa Yumesanbashi event that takes place at the south entrance of the JR Osaki Station, begins on the second Saturday in October, and lasts for the next three days.
The train leaves Osaki Station and travels around the entire Yamanote Line without stopping before returning to Osaki Station.

Every year the event is advertised in Shinagawa Ward's PR magazine and, perhaps because of its uniqueness, reservations for the eleven-car train quickly fill up with over 1000 eager riders.

The idea for the non-stop Yamanote Line came from Nobukazu Tsunashima, a member of the Osaki Station West Entrance Shopkeepers’ Association. The genesis for the idea goes all the way back to the opening of the freshly renovated Osaki New City Building in 1987. 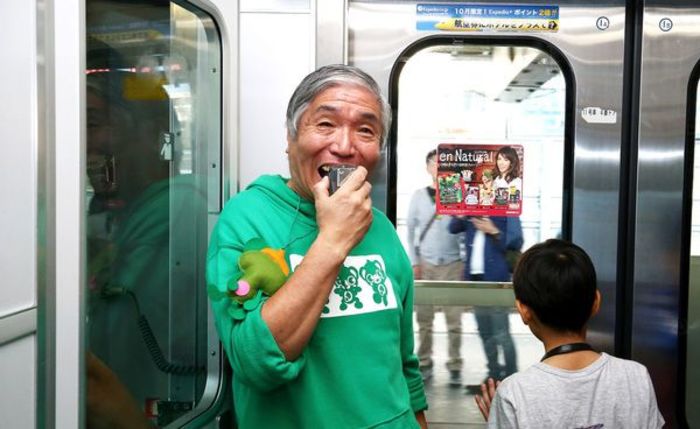 Nobukazu Tsunashima came up with the non-stop Yamanote Line idea.

Today, a forest of high-rise buildings surrounds Osaki Station, but at that time it was one of the least busy stations on the Yamanote Line; only Uguisudani Station saw fewer passengers. Tsunashima, who was born in Osaki and had great affection for the area, was deeply frustrated by the situation.

New City had just opened, so Tsunashima wanted to create an event with Osaki Station at the center that would make an impact. His colleagues considered Osaki the least known of the Yamanote Line stations. To counter this lack of name recognition, he had the idea of chartering the Yamanote Line and running a non-stop annual event train.

The reason it has continued for 28 years

Normally, the exterior and interior of special event trains are decorated in order to create more excitement for the event. However, in the case of Yumesanbashi, there is no budget, so there are no decorations. Tsunashima has an interesting take on this: "The fun part is that the regular Yamanote Line passes through the station and surprises the people on the platform. It's no fun if it is decorated and made into a special train."

Since there is no budget, children who ride the train receive presents from companies cosponsoring the event. "It doesn't matter if the presents are unused promotional goods. Even if they are pamphlets for an old model car, the kids are happy," Tsunashima says.

The staff members assisting the passengers are volunteers. During the volunteer training session, the always-smiling Tsunashima becomes quite serious. "If there is even one incident during the event, it will be over. That's why we want the volunteers to take it seriously."

Locals and also children with disabilities are invited to the event. In 2011, the year of the East Japan Earthquake, families of the disaster-stricken area were also invited.

This year marks the 28th year of the non-stop Yamanote Line. There have been other train events on the Yamanote Line, during which passengers were allowed to consume alcohol inside the train, but the Yumesanbashi is probably the only event that has lasted 28 years. It has lasted so long because its driving force is passion rather than profit.

It’s October 12, the day of the event. A little after 1pm, the passengers line up with tickets in hand.

At 2:06pm, the Yumesanbashi, without a nameplate on the front, pulls into Osaki Station.

At 2:35pm, the train starts moving. Tsunashima is the announcer and explains, "The train will travel at a leisurely pace, making no stops. We will return to Osaki Station in about 1 hour."

As the train nears Shibuya Station, Tsunashima's voice can be heard from the speakers in the ceiling, saying, "Wave at the platform." The passengers on the platform stare in bewilderment at the passengers in the non-stop train waving at them.

"At the station they announce that the next train cannot be boarded," the onboard JR employee tells us. Even so, the people waiting cannot believe that passengers on a train filled to capacity are waving cheerfully at the platform. Inside the train, a guitarist plays, and there is a group of foreigners dressed in kimonos.

The train has passed Tokyo Station and is on the last leg of its journey. Passengers begin to take one another’s hands. On the Yamanote Loop Line, inside the 11-car train, all the passengers hold hands and create a human chain. All of the passengers become one. This is a tradition that started on the very first non-stop service. 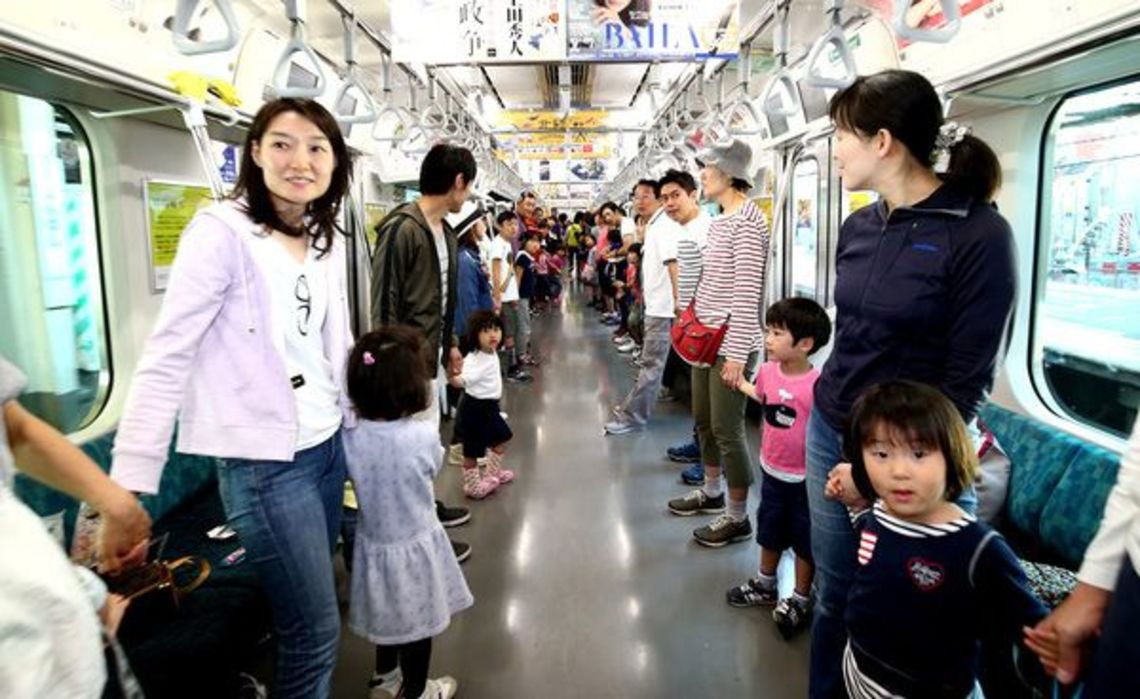 At 3:37pm, the train arrives on schedule at Osaki Station. The staff guide the passengers off the train. They are reluctant to leave, but it cannot be helped. The next train is arriving in a few minutes.

After grasping a microphone for an hour straight, Tsunashima's hands now hold a bucket and cleaning cloth. Now, it's time to clean the train. Cleaning up thoroughly this time helps to ensure that there will be a next time.

'Yumesanbashi' means a bridge that connects dreams. Realizing and continuing a dream requires ceaseless effort. The non-stop Yamanote Line is a clear example of this.

Where to Admire the Autumn Leaves in Tokyo

The Top 10 Railways of Japan That Absolutely Delight Visitors