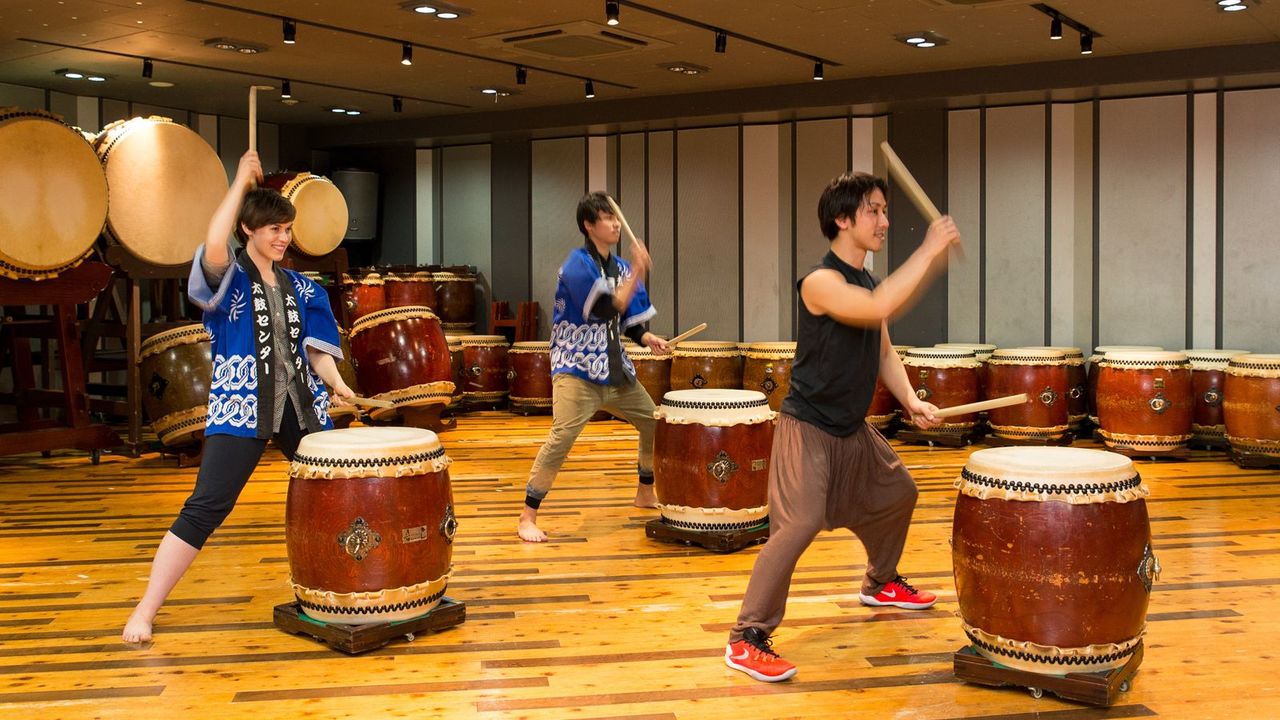 If keeping fit while traveling is important to you, how about getting your heart rate going as you enjoy Japanese culture during a class at TAIKO-LAB? TAIKO-LAB offers wadaiko (Japanese drum) lessons that are a combination of music, exercise, and performing arts. My friend Jin and I dropped by the TAIKO-LAB studio in Aoyama to see what it was like.

Our hour-long class took us quickly through the basics of learning how to play a medium-sized drum called a nagado. It didn't take long to see why classes here are a popular means of relieving stress. Ishida encouraged us to be big and loud and to have fun as we worked our way through fundamentals like how to correctly strike the drum. 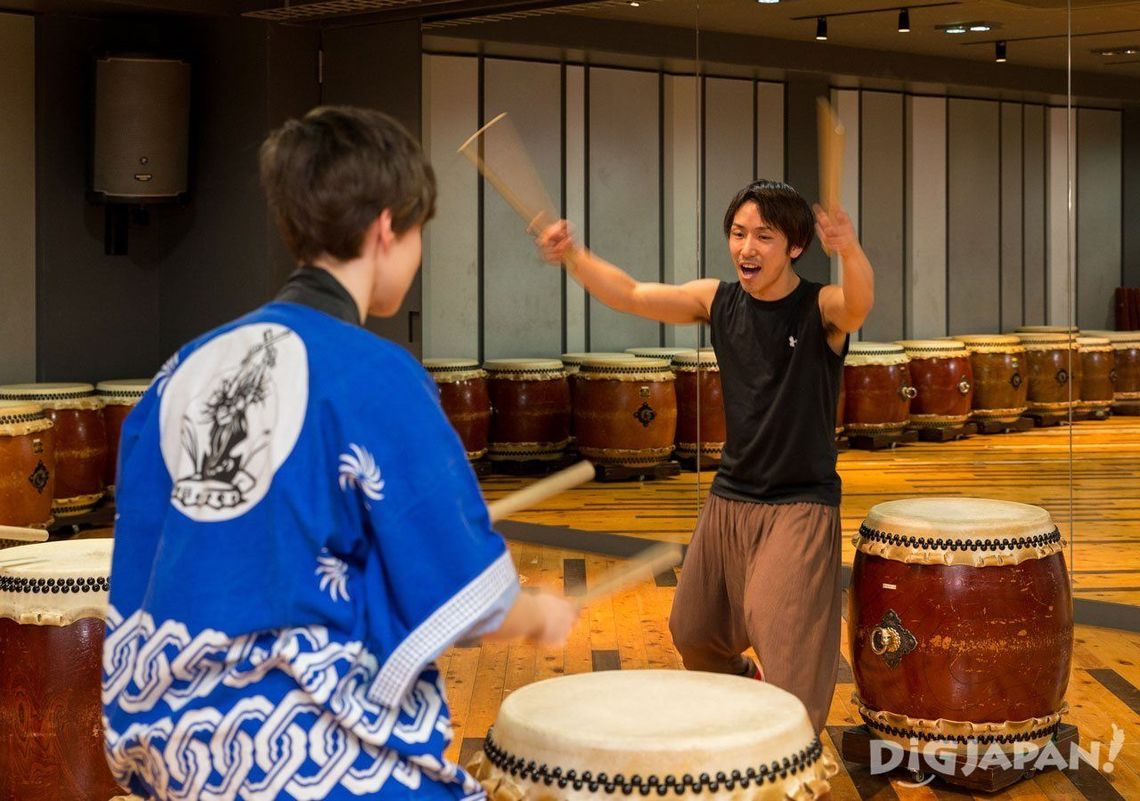 Ishida was a very enthusiastic teacher who encouraged us to be bold and have fun even if we made some mistakes.

Don't know how to read sheet music for drums? No problem! The rhythms used in wadaiko were originally passed down through an oral tradition called kuden (口伝). These special sounds not only communicated the rhythm, but also things like which hand to strike with. During our lesson, we learned two basic rhythms. One was called don doko and the other was called san-san-nana byoshi.

This article was originally appeared in DiGJAPAN!

But playing taiko is more than just playing a rhythm. There are certain gestures that go with each rhythm. It would seem like putting those two things together shouldn't be so hard, but you'd be surprised. I’d played taiko before this class, but I still made some mistakes. Just when I was getting into the rhythm, I'd forget to put my arms up or something. But messing up was part of the fun! Also, the instructors here are sensitive to the ability level of his or her students, so you won't have to do something that's way over your skill level.

Just as we'd worked up a good sweat, it was time to move into performance mode. We had a little jam session with Ishida. He took the patterns we'd been practicing and added to them an intro and a finale complete with a cool ending pose! Jin and I alternated playing the don doko and san-san-nana byoshi rhythms while Ishida did his own thing, playing on both a nagado and a smaller snare-like drum called a shimedaiko. 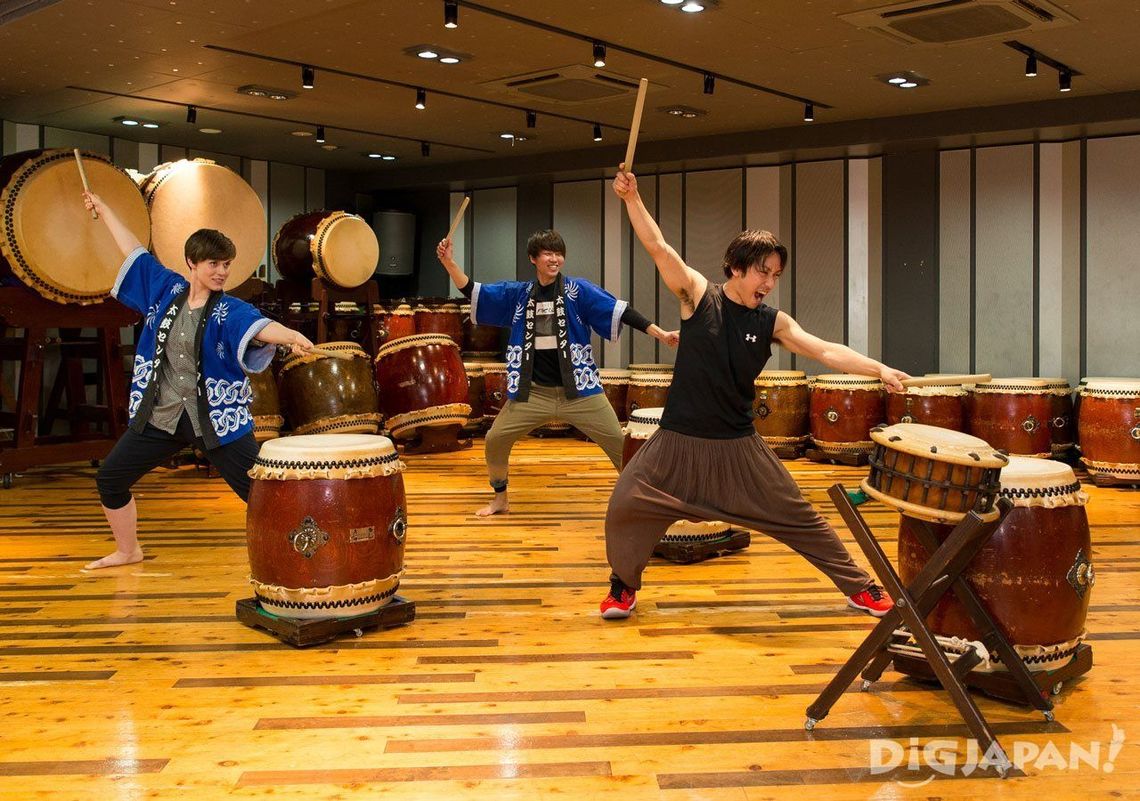 Striking a pose for our big finish!

Check out some clips from our performance!

Bonus: the Biggest Taiko of Them All! 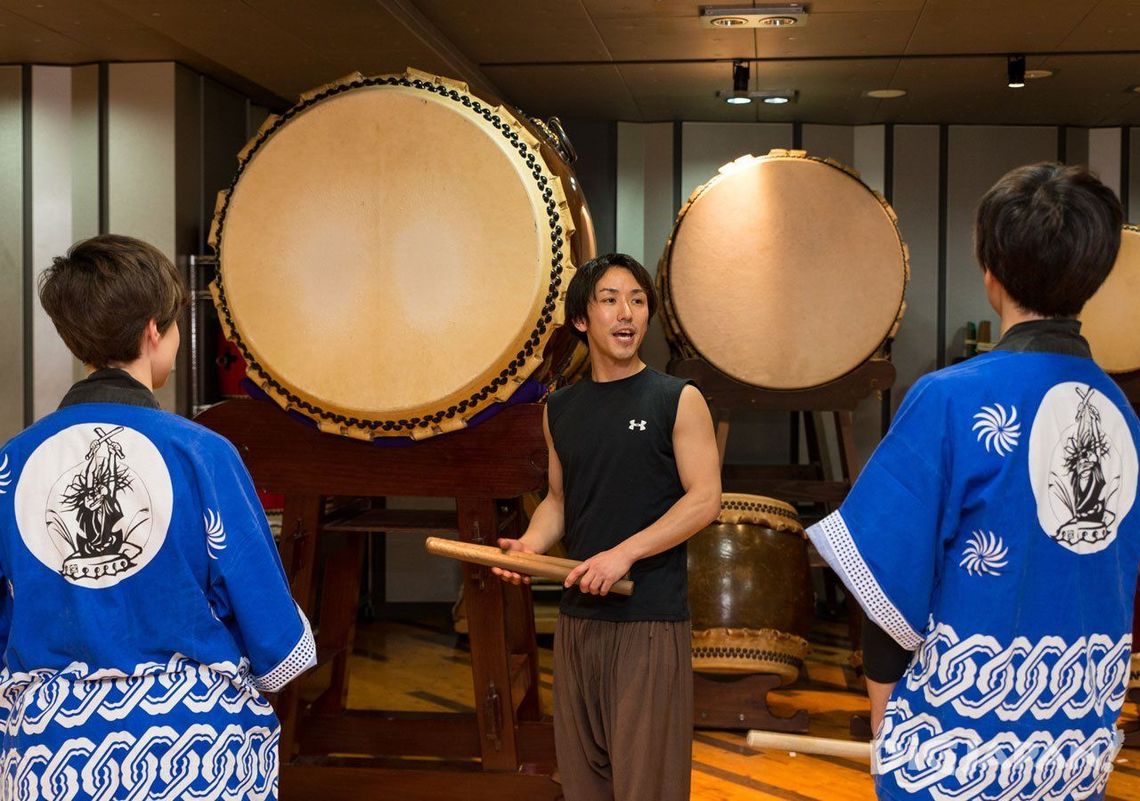 Ishida explains to us about the odaiko, the biggest of the drums.

As a special bonus, Ishida let us try the odaiko. The name means “big drum.” Very appropriate choice. The motion for striking this thing is similar to throwing a baseball, only you're wielding large drum sticks. It took only about thirty seconds of playing to realize why the instructors here are all in great shape. Playing the odaiko requires serious core strength in order to get some real power behind your hits. Jin liked this taiko the best. 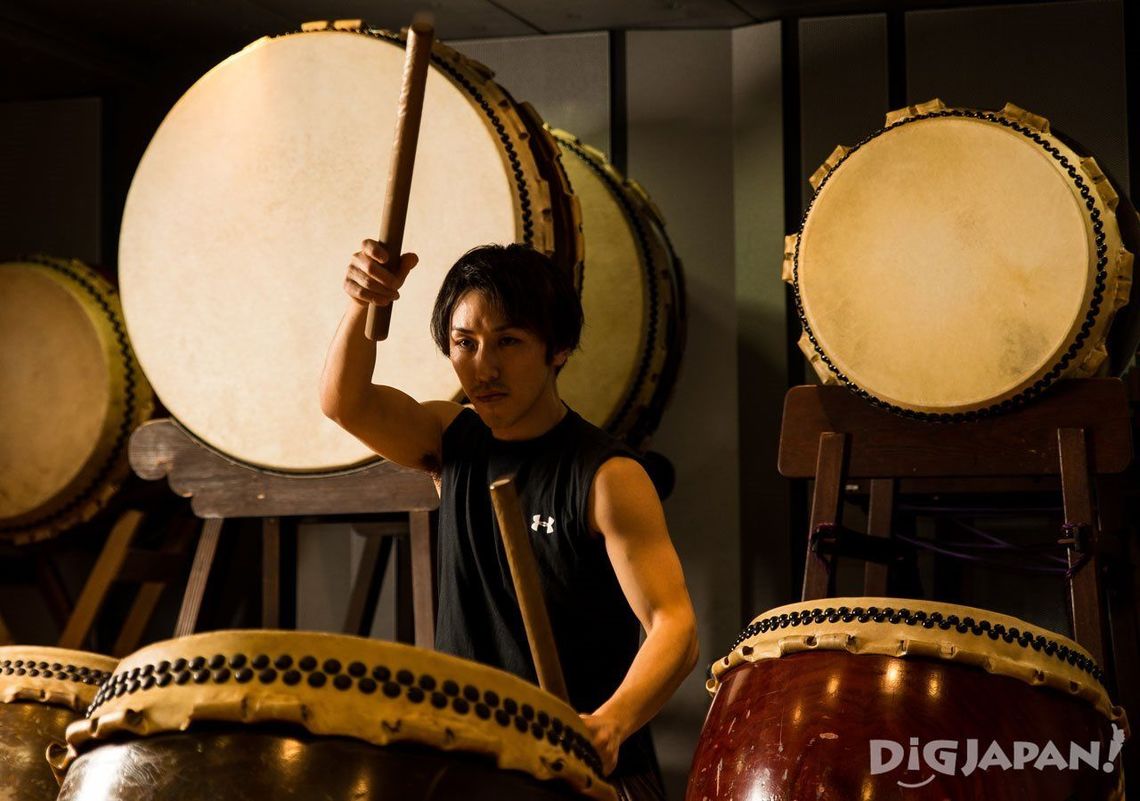 Ishida shows us how it's done during a demonstration at the end of our lesson.

The lesson concluded with a demonstration by Ishida. He made it look like it was nothing, but having tried for myself I could appreciate the amount of practice and dedication it must have taken for him to reach his level.

Behind the Scenes: the Facilities 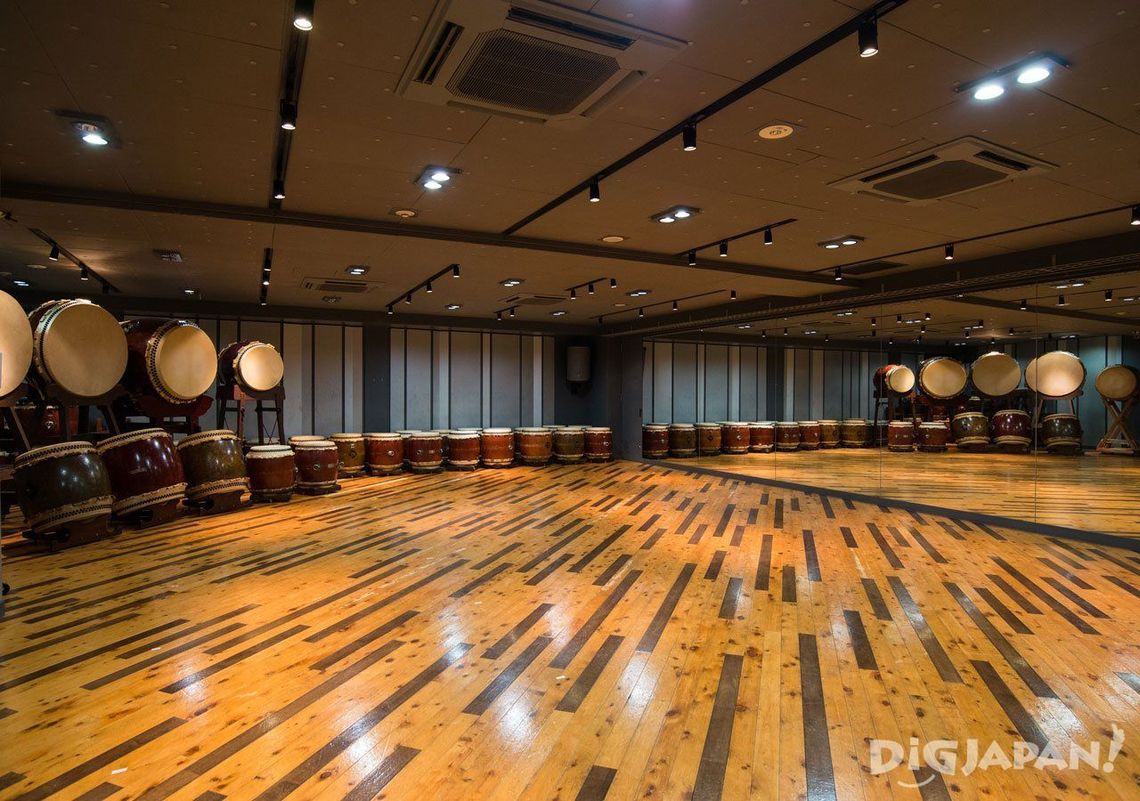 The largest room in TAIKO-LAB Aoyama holds up to fifty people and has the odaiko.

Even when living in the U.S., I always found entering a new studio to be sort of awkward. I don’t know anyone or where anything is, where I’m supposed to go... It takes a while before it starts feeling like I belong there. TAIKO-LAB was the opposite of that. I’m not sure if it was something about the layout or the really cool lighting, but the facility felt welcoming from the moment I walked in.

Now for some specifics. The Aoyama studio has three practice rooms. The largest holds fifty people and the other two hold twenty-five each for a max capacity of about one hundred people. The odaiko is located in the biggest room. 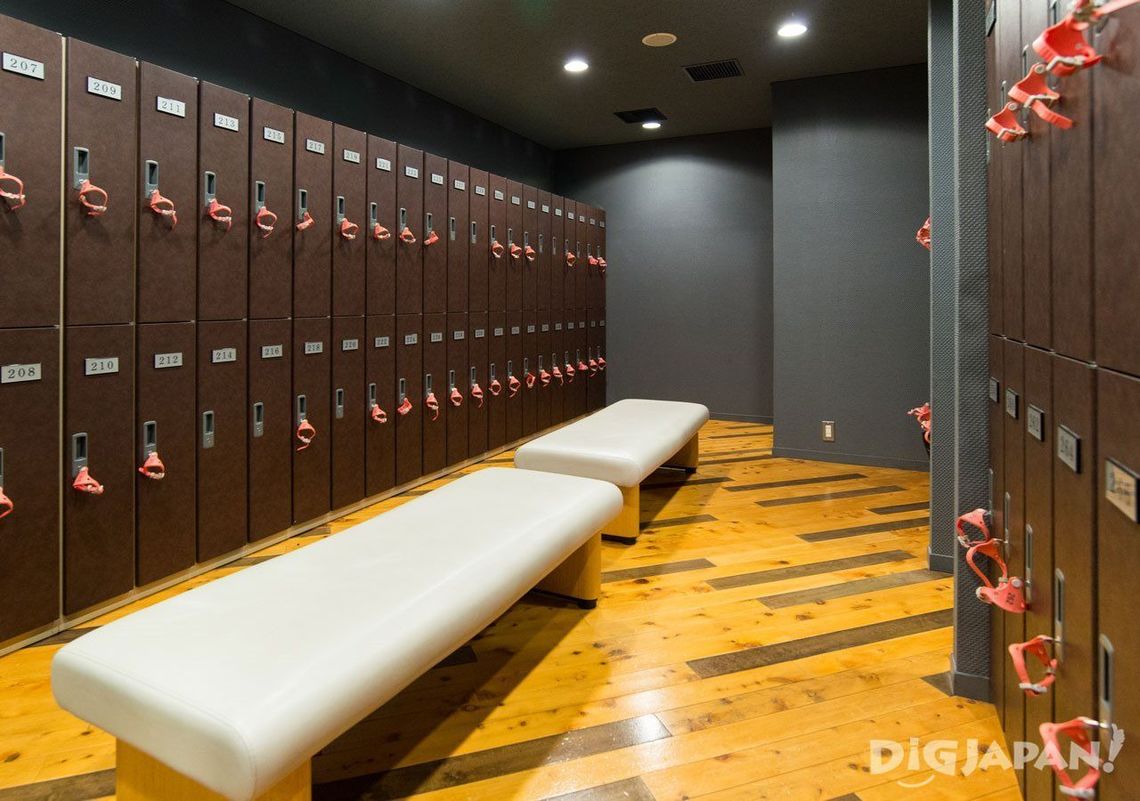 The locker rooms at the Aoyama studio were exceptional. They were so nice that I made our camera man go in and take some pictures. I’m not a germophobe, but the cleanliness of locker rooms plays a big part in how I evaluate dance studios and gyms. The locker rooms were exceptionally clean and equipped with both restrooms and showers. You can properly freshen up after your class is over. Note that you will need to bring your own towel if you should want to shower.

Lessons to Accommodate Any Need

While lessons are typically 60 minutes long, TAIKO-LAB can adjust both time and content of the lessons to suit individual needs. Some examples of lessons they've conducted in the past include two hours of advanced private instruction for professional musicians, a one-hour group class as part of a school trip for high school students from Australia, a one-hour class with a performance held at the participant's hotel, and even a workshop for a group of 180 tourists from France! If you're curious about what you can do at TAIKO-LAB, send them an inquiry at the email listed in the information section below.

The Nitty-Gritty: a Few Important Details

Bring clothes that you feel comfortable exercising in. You will be asked to take off socks and shoes for your lesson, so athletic shoes are not necessary.

English levels vary by instructor, but it’s reasonable to assume that instructions will be given in simple English. Given the nature of the class, this doesn't pose a huge problem; just do what the instructor does. If you're traveling with a translator guide, he or she is welcome to attend the lesson and translate. 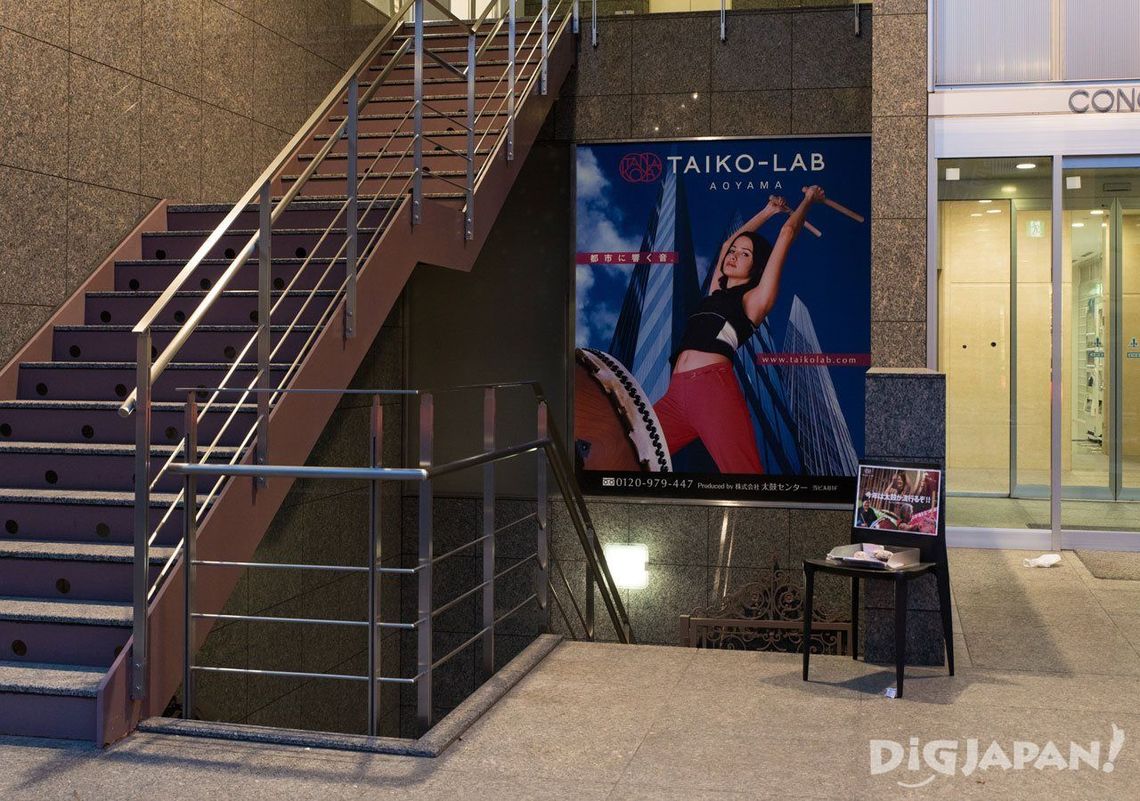