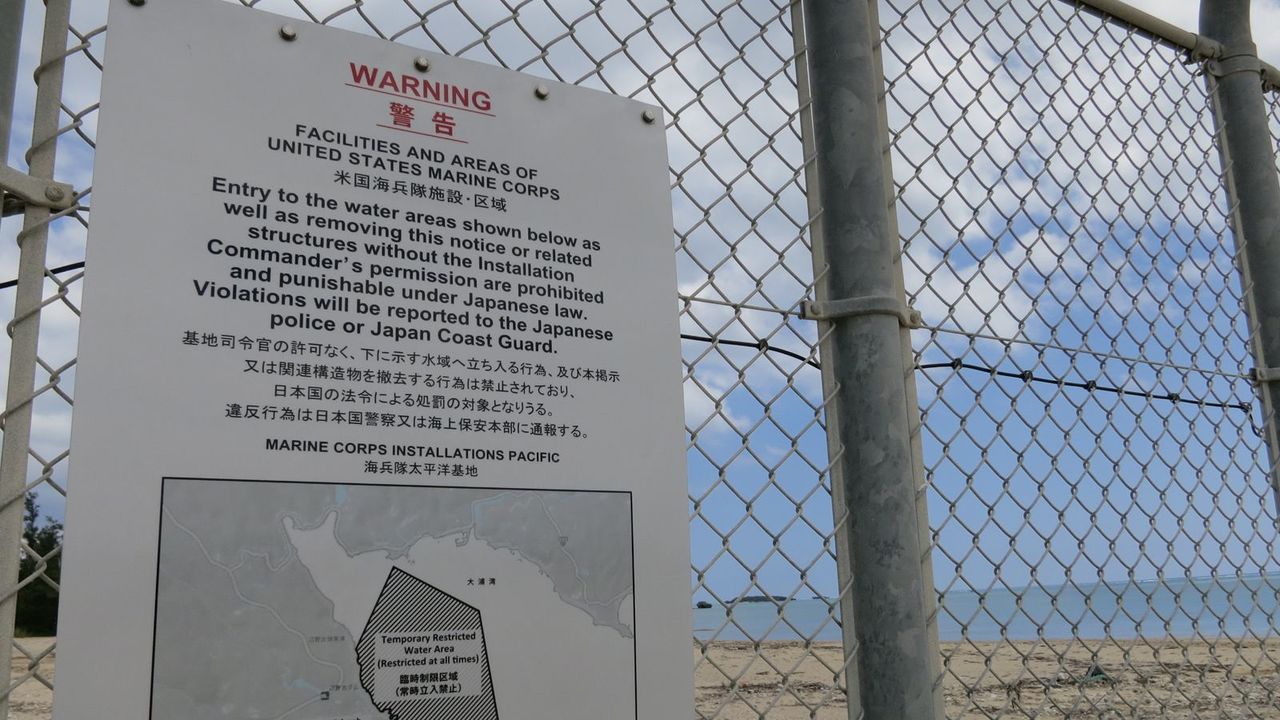 (The Henoko plan has met with fierce opposition among a large majority of Okinawans. Photo taken in September 2015)

The hotly contested race for mayor of Ginowan on January 24 did little to ease the intense stalemate over restructuring the heavy presence of U.S. Marines in Okinawa, Japan’s southern-most prefecture.

With strong backing from the government of Prime Minister Shinzo Abe, incumbent mayor Atsushi Sakima garnered 56% of the vote, handily beating challenger Keiichiro Shimura in what analysts expected to be a tighter race.

The election amounted to a proxy war between Tokyo (and Washington) on the one side, and the Okinawa prefectural government on the other. The U.S. and Japan almost 20 years ago decided to close the U.S. Marine Air Station Futenma, which is dangerously located in the center of Ginowan, and settled on moving the Futenma operations to a new air station to be built in the less-populated Henoko Bay area, a district of Nago, which is north of Ginowan.

The Henoko plan has met with fierce opposition among a large majority of Okinawans, striking a discordant note in what is supposed to be a deepening US-Japan security alliance in the face of growing assertiveness by China throughout East Asia.

Abe greeted the Sakima victory with a reaffirmation of his intention to push ahead with construction of the Henoko facility. But Okinawa governor Takeshi Onaga, who was swept into office in late 2014 with his insistence that a Futenma replacement facility be built outside of Okinawa, has not changed his position, leaving obstacles in place to hinder smooth implementation of the Henoko plan.

The stakes were high for both Abe and Onaga in the Ginowan race. Abe, who has promised an irritated Washington that he will get the Henoko project built, was anxious to end the recent string of electoral victories for anti-Henoko candidates in Okinawa, including Susumu Inamine as mayor of Nago, Onaga as governor, and all four members of the Lower House from Okinawa, all in 2014. A victory in Ginowan for the anti-Henoko Shimura would have boosted Onaga’s “All Okinawa” claim that public opinion at the local level in Okinawa is united against the Henoko plan, and further complicated implementation.

For Onaga, on the other hand, it is critical to maintain the pressure on Abe that a united Okinawa generates, as part of what Onaga and his aides describe as a strategy to “shame” Washington and Tokyo into changing course. For Tokyo to proceed with Henoko in the face of intense local opposition, Onaga says, would be fundamentally anti-democratic.

Abe pulled out all the stops to get Sakima reelected, including putting his closest confidante, Chief Cabinet Secretary Yoshihide Suga, in charge of the effort. Suga carefully dispatched influential Diet members to Okinawa to quietly lobby business associations and other interest groups to back Sakima, being careful to keep a low profile so that Tokyo did not appear to be wielding a heavy hand. The ruling Liberal Democratic Party dispatched three staff members from party headquarters to assist the Sakima campaign. Suga backed up Sakima’s idea of bringing a Disney Land resort to the land to be vacated by the Marines at Futenma, personally lobbying executives from the Oriental Land that operates Tokyo Disney Land.

During the campaign, Sakima tactfully avoided taking a stand on the Henoko facility, insisting instead that Futenma be closed and that Ginowan focus on economic development. Tokyo warned that construction delays in the Henoko project would only result in the hazardous Futenma base remaining open for an indeterminate period of time.

Onaga, for his part, made the quick trip from his office in capital city Naha to central Ginowan to deliver impassioned speeches in support of Shimura and in opposition to the Henoko project.]

Who won the proxy war?

Prime Minister Abe and the LDP machinery were quick to claim victory, arguing in essence that the result in Ginowan exposed a myth that public opinion in Okinawa is uniformly opposed to the Henoko project. Abe, and Defense Minister Gen Nakatani, both asserted that construction of the Henoko facility would proceed. Aiko Shimajiri, an LDP Upper House member from Okinawa and Abe’s state minister for Okinawa issues, argued that a “silent majority” had spoken in Ginowan.

But exit polls conducted by Asahi Shimbun and Mainichi Shimbun tell a very different story. Asahi found that 57% of voters said they oppose the Henoko. Mainichi found that 57% were opposed, while only 33% favored the new facility. Mainichi also found that 55% of voters were critical of the central government’s approach to the Futenma-Henoko issue. Two weeks before the election, Abe told the Diet that “matters related to national security will be decided by the nation as a whole,” effectively dismissing public opinion in Okinawa.

The citizens of Ginowan understandably have mixed feelings about the Futenma-Henoko issue. On the one hand, they favor quick closure of the Futenma base, which occupies a quarter of the city’s entire land mass, and poses a constant danger to surrounding populated neighborhoods. The U.S. and Tokyo have insisted that Futenma will remain open until the Henoko replacement facility remains stuck on the drawing boards. With the economy of Ginowan weak, citizens also hope to gain from economic development projects that might blossom with the return of land now used by the U.S. Marines at Futenma.

But the evidence is strong that voters in Ginowan, and throughout Okinawa, while desirous of a quick closure of Futenma, also opposed replacing the Futenma base with a new facility in Henoko Bay.

The next battles over the U.S. Marine presence in Okinawa will be in the courts, the June elections for the Okinawa Prefectural Assembly, and the Upper House elections to follow.

Onaga has little confidence that the courts will rule in Okinawa’s favor, but the process of legal maneuvering will buy him some valuable time to continue to organize political opposition.

June elections for the Prefectural Assembly, which has 48 members, should provide an accurate reading of the mood in Okinawa. The governing coalition, which came to power in 2012, strongly backs Onaga’s fierce opposition to the Henoko facility.

The Upper House elections will have national significance far beyond Okinawa, as they will amount to a referendum on the Abe government, especially new defense and security policies, trade policies, and the prime minister’s personal drive to change the postwar ‘pacifist’ Constitution, for which he needs, among other things, a two-thirds majority in the Upper House.

In that context, the seats from Okinawa are important, especially that held by Aiko Shimajiri, who took over the Okinawa portfolio for Abe’s cabinet last October. Shimajiri was first elected to the Upper House from Okinawa in 2007, and is the most prominent politician from Okinawa who sides with the central government in favor of the Henoko facility. Staff close to Onaga say the governor has set his sights on defeating Shimajiri in her upcoming reelection bid.

What Will USJ's New Theme Park in Okinawa Look Like?