Researchers recorded three-dimensional x-rays of real salamanders, tracking up to 64 points on the animal's skeleton.

This was then recreated in robotic form.

He says Pleurobot is the most accurate robotic representation of an animal ever created. 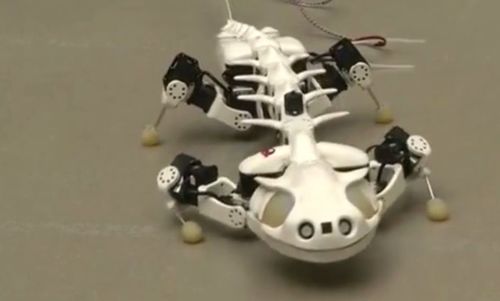 "We could really record all these bone motions; extract that information on a computer to have all the data of the bone motion. And then make probably the robot that's the closest to an animal ever, I would say. It's really kind of unique to be able to replay as closely the walking data and the swimming data and other types of behaviour."

Ijspeert believes the salamander, which is older than the dinosaurs, is a key evolutionary creature.

This makes Pleurobot ideal for testing evolutionary hypotheses, such as how the creature's ancestors evolved from aquatic to terrestrial locomotion.

It's also helping neuroscientists better understand how control signals are received by the human spinal cord.

This, they hope, could lead to the development of new therapies.

"And this type of research is very important to be the guidance research to see how you could stimulate the spinal cord, re-induce locomotion in possibly paraplegic patients in the long run. So this fundamental understanding of spinal cord functioning is very important from a medical point of view."

Pleurobot's low centre of mass and segmented legs means it could also have applications as a search and rescue robot.

The team is now working on a smaller model based on the Pleurobot that can operate on both land and in water, and is capable of navigating rough terrain.

Hidden Ambitions in a Robot Hotel