By Bill Emmott : Former editor-in-chief of The Economist
August 19,2015 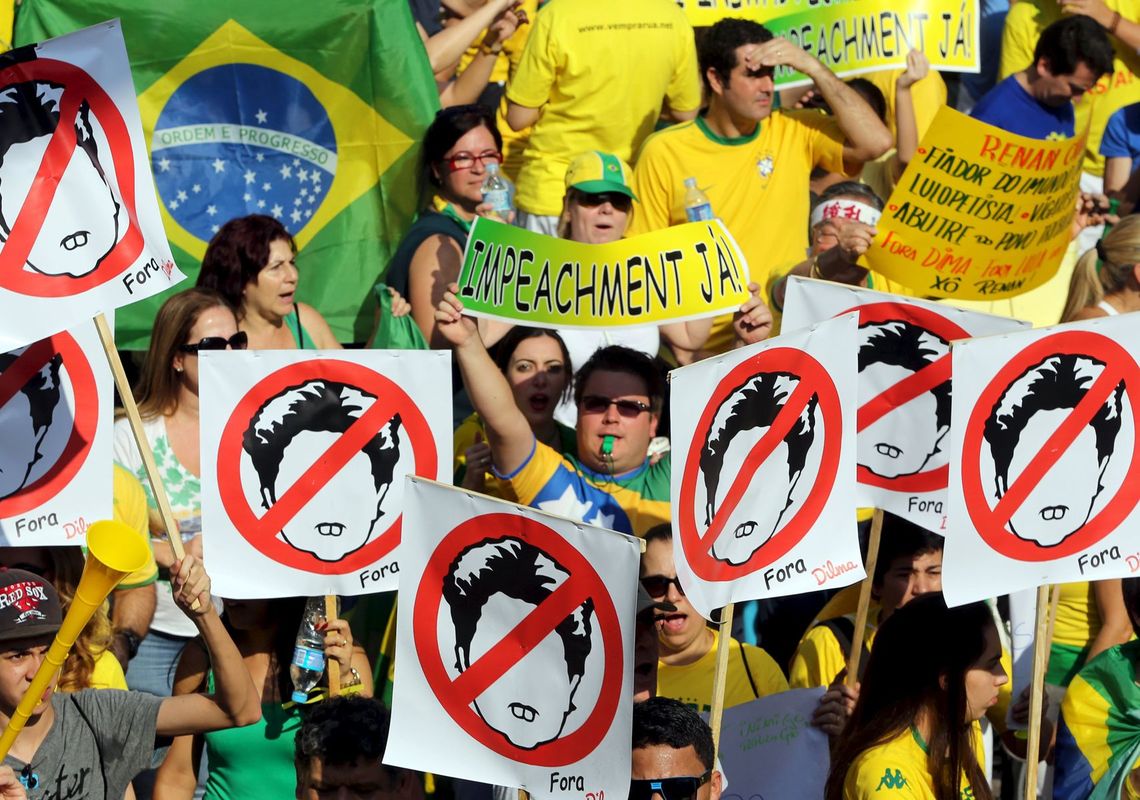 Brazil has seen its eocnomy falling for past two years.  Demonstrators attend a protest against Brazil's President Dilma Rousseff, part of nationwide protests calling for her impeachment, at Paulista Avenue in Sao Paulo's financial centre(Photo by Paulo Whitaker/Reuters)

LONDON – Something has gone badly wrong in the emerging economies that were supposed to be shaping, even dominating, the future of the world. The search for culprits is under way: commodity prices, fracking, U.S. interest rates, El Nino, China, these and others lead the field. But the answer is simpler and more traditional. It is politics.

Look at Brazil. There an economy once tipped for ever-lasting boom has barely grown for more than two years, and is currently shrinking. Falling prices for its commodity exports haven’t helped, but Brazil’s economy was supposed to be about far more than just harvests and extractive industries.

Or look at Indonesia. That economy is still expanding, but at a rate – 4.7% annually in the latest quarter – that is disappointing in terms both of previous expectations and of population growth.

The same can be said of Turkey, where growth has sagged to 2.3% in the latest quarter – which at least beats population growth but is meager compared with the country’s go-go years of 2010 and 2011, when it expanded by 9%. Or South Africa, where economic progress has constantly been too slow, whether in boom years for gold and other resources or busts, to make any real dent in poverty levels.

Then there is China itself, whose slowdown is everybody else’s favorite explanation for their own sluggishness. There, private economists are back enjoying their favorite pastime during periods of economic stress, namely trying to construct their own indices for GDP growth as at such times they do not believe the official statistics.

Officially, Chinese growth is rock-steady at 7% per year, which happens to be the government’s declared target, but private economists’ estimates mostly range between 4% and 6%.

One mantra of recent years has been that, whatever the twists and turns of global economic growth, of commodities or of financial markets, “the emerging-economy story remains intact.” By this, corporate boards and investment strategists mean that they still believe that emerging economies are destined to grow a lot faster than the developed world, importing technology and management techniques while exporting goods and services, thereby exploiting a winning combination of low wages and rising productivity.

There is, however, a problem with this mantra, beyond the simple fact that it must by definition be too general to cover such a wide range of economies in Asia, Latin America, Africa, and Eastern Europe. It is that if convergence and outperformance were merely a matter of logic and destiny, as the idea of an “emerging-economy story” implies, then that logic ought also to have applied during the decades before developing-country growth started to catch the eye. But it didn’t.

The reason why it didn’t is the same reason why so many emerging economies are having trouble now. It is that the main determinants of an emerging-economy’s ability actually to emerge, sustainably, are politics, policy and all that is meant by the institutions of governance.

More precisely, although countries can ride waves of growth and exploit commodity cycles despite having dysfunctional political institutions, the real test comes when times turn less favorable and a country needs to change course.

That is what Brazil has been finding so difficult for the past four disappointing years. Unable to keep inflation under control without causing a recession, the country has, since 2010, got stuck not because of bad luck, or any loss of entrepreneurial spirit in its private sector, but because of political failings.

Brazil’s government has been unwilling or unable to cut back its bloated public sector, has been mired in vast corruption scandals, and yet its president Dilma Rousseff continues to evince a fondness for just the sort of state-led capitalism that leads to exactly these problems.

The democracies of Brazil, Indonesia, Turkey, and South Africa are all currently failing to perform what is a basic task for any political system: to mediate smoothly between competing interest groups and power blocs in order to permit a broader public interest to prevail. By that is meant essentially a public interest in allowing the economy to evolve flexibly, so that resources move from uses that have become unprofitable to ones that have a higher potential. A clogged up economy, one that does not permit such creative destruction and adaptation to new circumstances, is one that will not grow sustainably.

Is this something that democracies, especially immature ones with fragile institutions of the rule of law and freedom of speech, are simply bad at, when compared with authoritarian regimes? Certainly, what these stumbling economies are guilty of is a failure to learn from Singapore, a system whose managed democracy is celebrating its 50th anniversary this year, and which has successfully avoided the sort of interest-group sclerosis and corruption that is holding back Brazil, for example.

One comfort, perhaps, for the democrats is that right now China is failing to learn the Singaporean lesson, too. Its current slowdown appears to arise from a failure by the Communist Party to challenge the monopoly powers of state-owned enterprises and to free up new sectors for private enterprise.

No matter. It is not a question of whether democracy or authoritarianism is best. The bottom line is that unless emerging economies can ensure that they remain flexible and adaptable, they will not continue to “emerge.” And the determinant of that flexibility and ability to adapt lies in political institutions and their willingness to challenge interest groups, mediate social conflicts, and maintain the rule of law. It’s the politics, stupid.

Buddhist Temples in Japan Are in Crisis