Living in a 1K Mansion 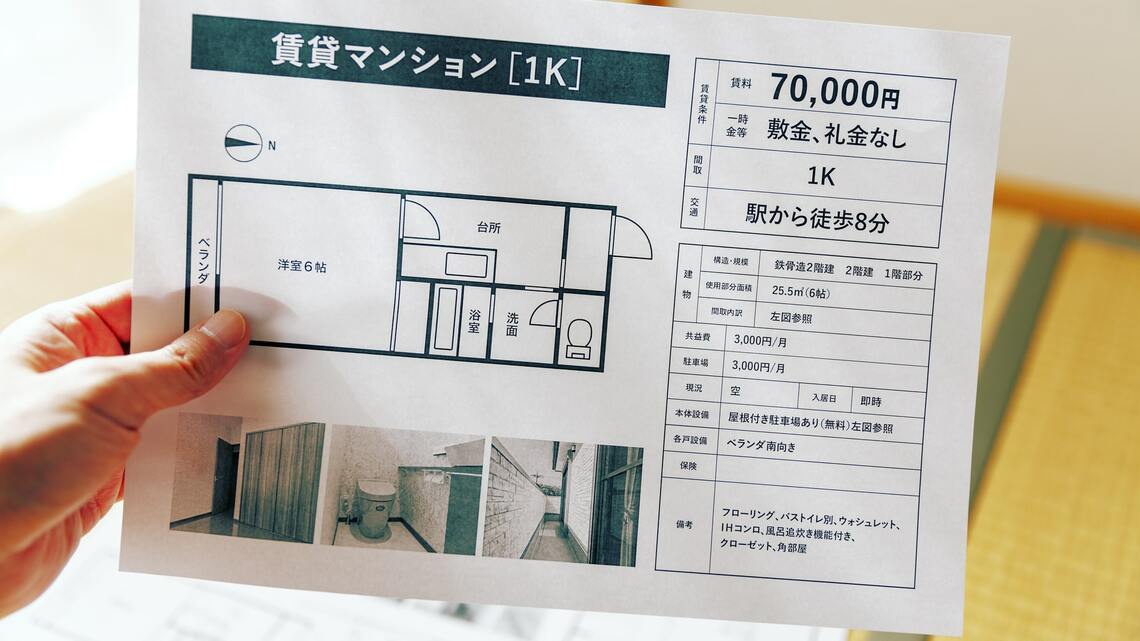 Springtime in Japan is all about new beginnings. This is seen, not just with the budding of the cherry blossom trees, but also with the start of the new academic and fiscal year in April. With so many students and recent graduates scrambling to secure a place to live, the months of February and March is by far the busiest moving season in Japan.

Apartment hunting in Japan can be a daunting task, but making sense of confusing wasei-eigo (Japanese pseudo-Anglicisms) found in apartment listings will go a long way toward reducing anxiety—or at the very least, clear up some confusion. Living in a 1K “mansion” may not be as posh as it may first seem. In this month’s article, Hakoda-sensei explains what features to expect when looking at apartment listings in Japan.

What separates a 1K from a 1DK apartment is the size of the kitchen. If the kitchen is smaller than 4.5 jō, it’s considered a 1K. If the kitchen is bigger than 4.5 jō, then it’s classified as a 1DK. Likewise, the difference between 1DK and 1LDK is also dependent on the size of the kitchen. A kitchen smaller than 8 jō is a 1DK; a kitchen larger than 8 jō is a 1LDK. When there are two or more bedrooms, kitchen-size dimensions for a DK and LDK classification become 6 jō and 10 jō respectively.

Japanese realtors use the term “one-room” to denote an apartment that has no separation between the kitchen and living room. In the west, this would be called a “studio” or “studio apartment”. You can imagine the look of confusion when people living outside of Japan hear the term “one-room mansion”, which envisages a large and impressive house consisting of a single room.

Before we get to the Japanese “mansions” (or “manshons”), let’s look at a side-by-side comparison of apartment labels in both Japanese and English:

Other abbreviations found on Japanese apartment listings are “WC” (water closet, a.k.a. toilet) and “CL” (closet). Most 1R apartments are equipped with “unit baths” which is a compact space consisting of a bathtub/shower, sink and toilet. Not all labels are represented by alphabetical letters though. The kanji 玄 denotes the entrance (玄関; “genkan”). 洗 is the kanji for “wash” and is used to label the space for a washing machine. The rooms themselves may be labeled 洋室 (yōshitsu; western-style room) or 和室 (washitsu: Japanese-style room). Note that a Japanese-style room will have traditional tatami flooring.

The Japanese Mansion and Apartment

The term “mansion” in English means “a large, impressive house.” In Japanese wasei-eigo, “mansion” (マンション; manshon) carries a very different meaning, typically referring to a series of rooms within a larger, singular concrete building. But this begs the question, “What is the difference between a ‘mansion’ and an ‘apartment’ (アパート; apāto)?”

The truth is, there are no official definitions for what makes a building a “mansion” or an “apartment”. This is evident by the fact that a building’s official certificate of registry makes no mention of either words. Thus, when it comes to how a building is labeled, it’s ultimately up to each property owner’s personal preference.

What, then, is the difference between an “apartment” and a “condominium”? This one has a more definitive answer: it comes down to ownership. Apartments are owned by a landlord while condominiums have different owners for each unit. In Japan, condominiums for sale are called bunjō manshon (分譲マンション), while higher quality apartments rented out by landlords are called chintai manshon (賃貸マンション).

You’ll rarely see mention of street names on apartment listings. This is because in Japan, streets have no names. Unlike the U.S. where streets are named and blocks are unnamed, Japan’s approach to addressing location is quite the opposite. Each block is assigned a number and the streets are merely the empty space that interweave these blocks. So how do most real estate companies advertise their housing properties? They use the time required to reach the nearest railway station.

For those living in cities with a strong public transportation network, proximity to railway stations is one of the biggest factors to consider when searching for a place to live. Take a look at some of these examples: 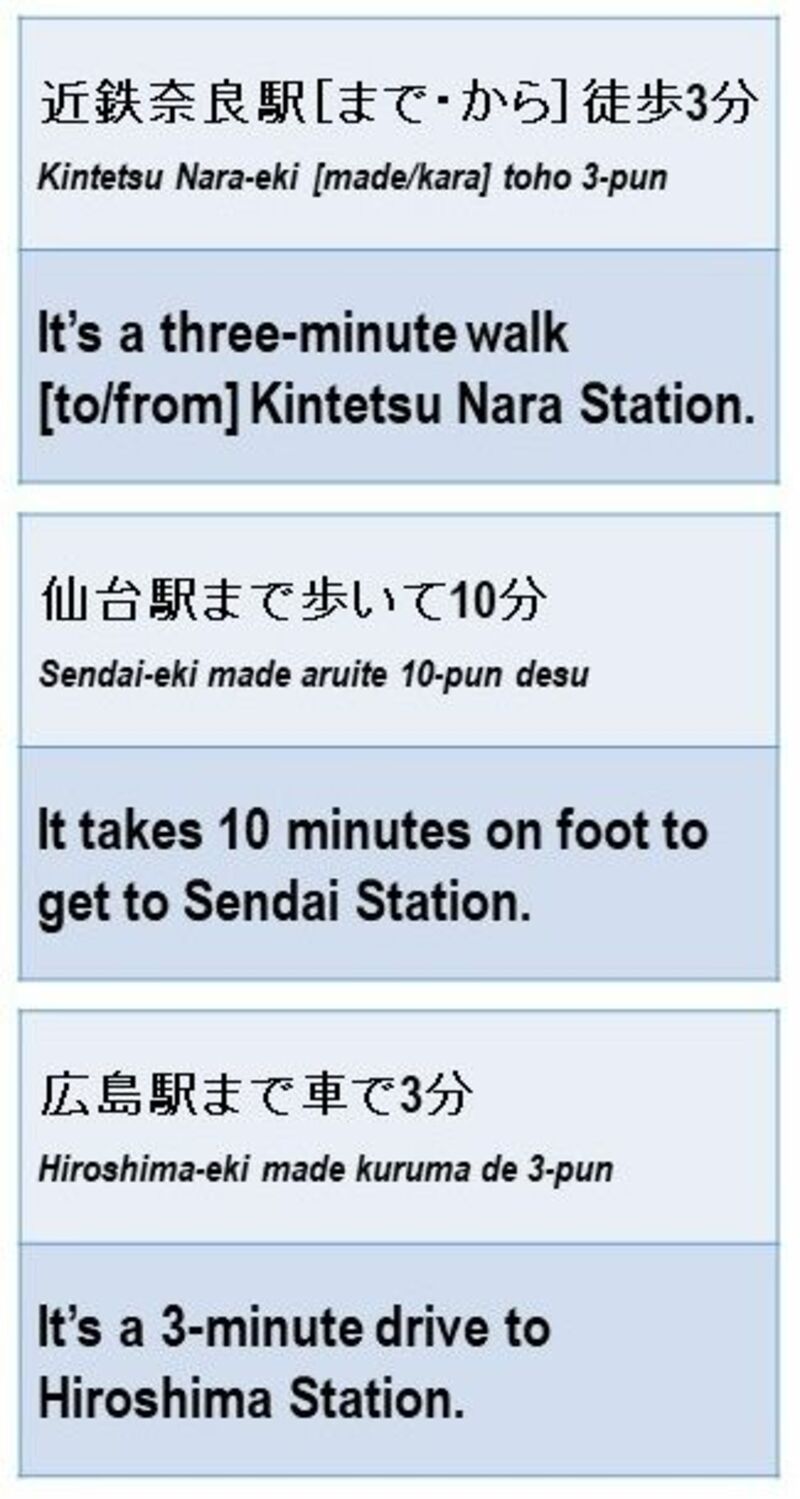 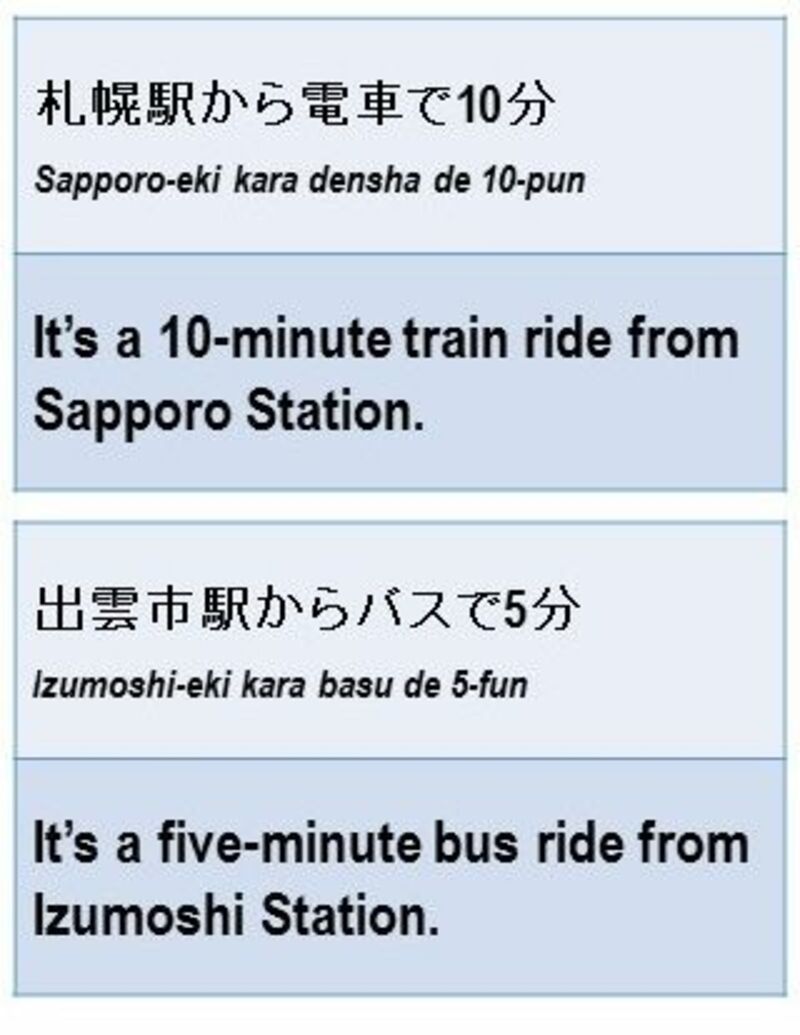 The advantages of living near a railway station doesn’t just end with trains. Residents also gain access to a wide range of department stores, office buildings, shops, restaurants and entertainment venues that have sprung up due to transit-oriented development.

As seen in the example above, the distance to the nearest railway station is given in minutes. But apartment hunters should note that the actual time it takes to get to the station tends to be longer than what real estate agents will have you believe. This isn’t advertising fraud though.

Rather, the listed time is based on a calculation set forth by the Fair Competition Rules on Real Estate Labeling which states that one minute of walking is equivalent to a distance of 80 meters (262 ft.) or a walking speed of 4.8 km/h (3 mph).

Considering that the typical walking speed for most people is 4.8 to 6.4 km/h (3 to 4 mph), this calculation rule seems fair. However, obstacles such as traffic lights, slopes and railroad crossings are not factored into the equation. For this reason, the listed “minutes to nearest station” is more of a best-case estimate. For a much more accurate measurement, apartment hunters should walk the path themselves using a timer.

Hakoda-sensei hopes this information will come in handy the next time you’re searching for an apartment in Japan. Happy hunting, everyone!