Making a Splash with Onomatopoeia 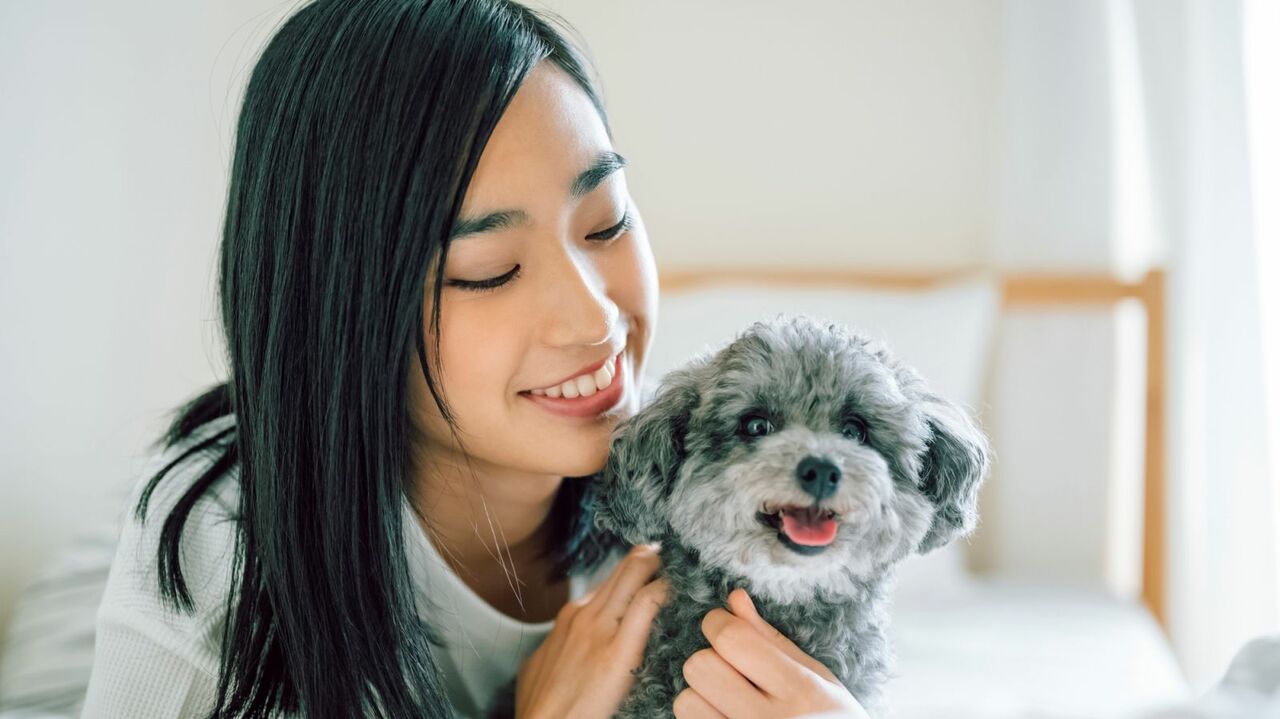 Is your stomach going “gūgū”? Are you “kan kan” with anger? The Japanese language has a large inventory of such ideophones—words that evoke sensory events. In English-speaking countries, ideophones tend to be called “onomatopoeia” which are mimetic words that act as lexical imitations of sounds. Think animal sounds from “Old MacDonald Had a Farm” or the in-your-face title cards from the 60’s Batman series.

The Japanese language takes mimetic words to a whole new level, using them as linguistic tools to help enhance the way sounds, movements and emotional states are described. And with over two thousand ideophones to choose from, Japanese mimetic words are a useful way to share sensory experience with others.

Still, deciphering the subtle nuances of Japanese ideophones can be tricky business. Hakoda-sensei unravels the deep and complex use of ideophones in the Japanese and English languages.

The Japanese language breaks down sound-words into “giongo” (mimicking the actual sound of the word being described) and “gitaigo” (abstract words used to depict atmospheric aspects such as facial expressions, emotions or feelings).

Below are some examples of Japanese “giongo” and “gitaigo” words: 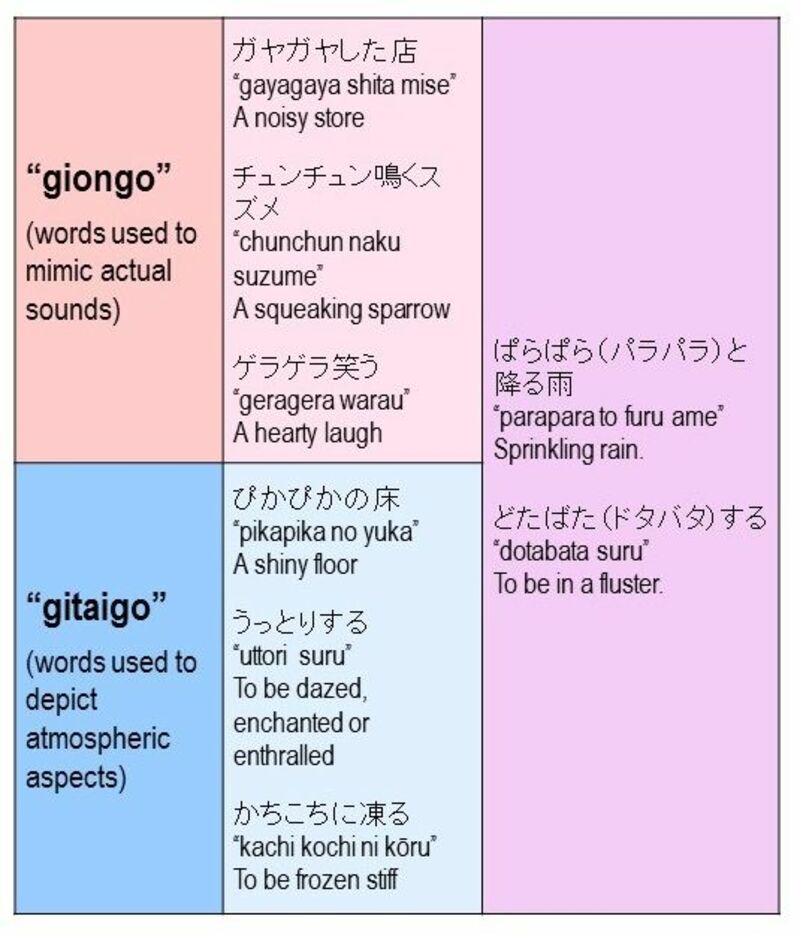 As seen in the example above, “giongo” are phonomimes that represent sounds such as that of a chirping bird or noises reverberating from a crowded store. On the other hand, words like “pikapika” and “uttori” are concepts that are not heard, but are instead used to imitate a particular “state”. These are known as “gitaigo”.

However, not all Japanese ideophones are as easy to categorize. For example, “parapara” could represent the actual sounds of raindrops hitting the ground or it could depict the scattered nature of the rainfall itself.

In the English language, “onomatopoeia” is described as “a word from a sound associated with what is named”. This is equivalent to the Japanese “giongo”. On the other hand, “ideophones” or “mimetic words” are often used as umbrella terms to describe both onomatopoeias (sounds) and non-onomatopoeic words (states).

The Japanese language also has “giseigo”, a specific form of phonomimes used to describe the “voice” of living things like animals and people. The English language is also full of these “giseigo” words—particularly useful for teaching animal sounds to children. Let’s look at how animal sounds compare between English and Japanese. 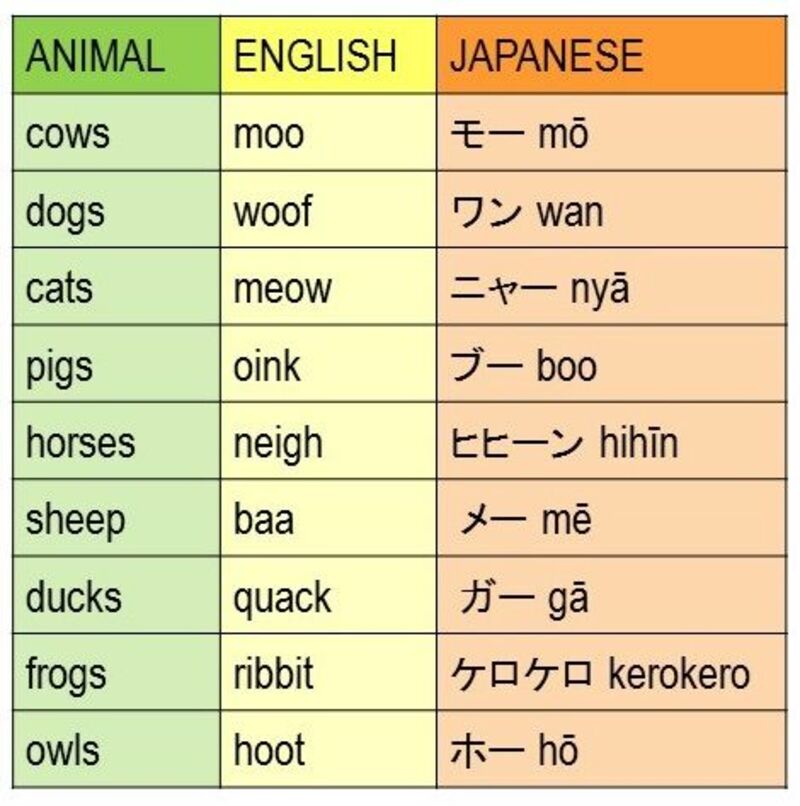 There are some obvious similarities. A cat’s “nyā” sounds very close to the English “meow”. The owl calls of “hō” and “hoot” are nearly identical. On the other hand, some animal sounds are interpreted quite differently. “Oink” and “boo”, “neigh” and “hihīn”, “baa” and “mē” are practically unrecognizable from each other. Although animals make the same sounds in all countries, differences in the phonetic features of a language cause them to be expressed in completely different ways.

When talking about mimetic words, researchers often bring up the effects of sound symbolism, or “the partial representation of the sense of a word by its sound.”

Within the Japanese language, vowel and consonant sounds can be associated with distinct meanings or imagery. It’s this complex combination of sound symbolism that is likely the basis for all Japanese ideophones.

Because of the built-in recognition of sound and its symbolic representation, a Japanese speaker could communicate using an entirely made-up mimetic word and the listener would most likely understand the intended meaning of the word. Japanese animal sounds were probably also constructed using this complex system of sound symbolism.

To illustrate the usage of sound symbolism in Japanese, refer to the tables below. Words containing kana letters in the い (i) row of the Japanese “gojūon” system (i.e. letters containing the い sound) are often associated with quickness, sharpness, high-pitched sounds, thinness, linear shapes and tension. 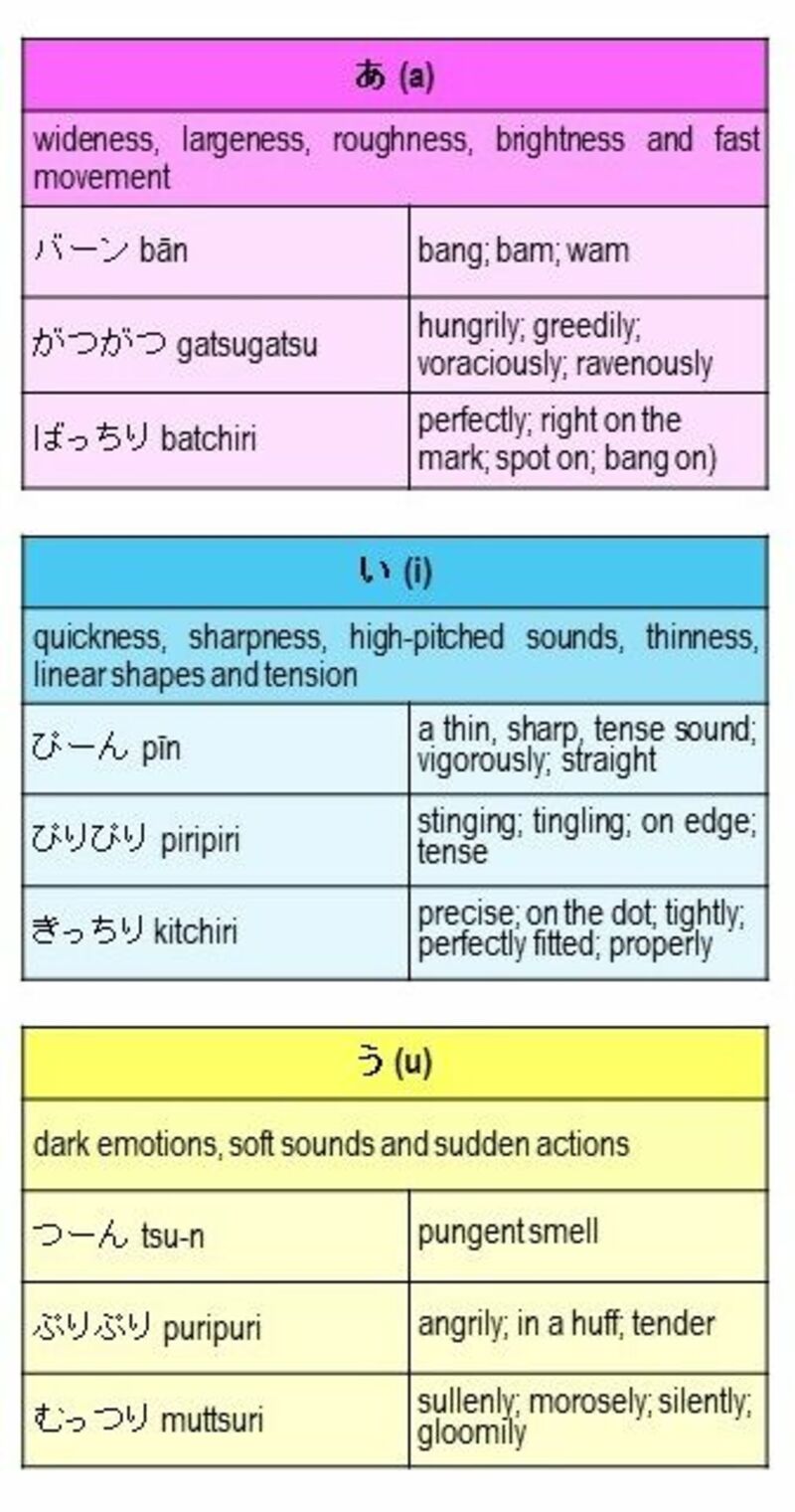 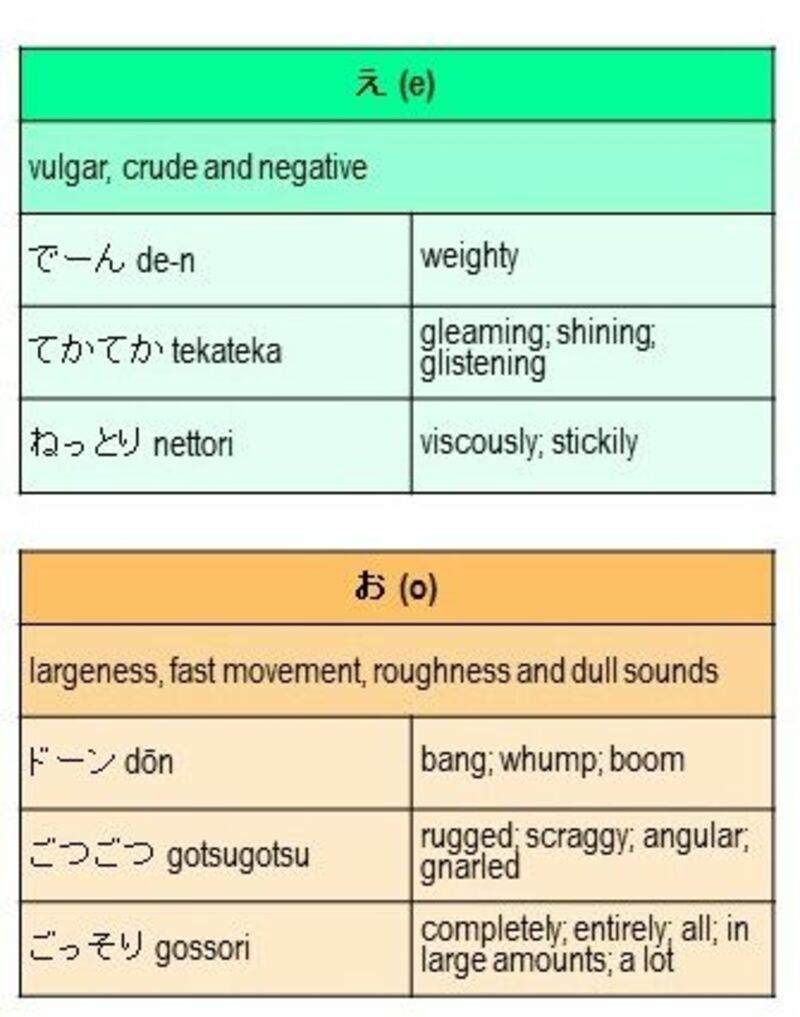 Unvoiced consonants (with the exception of the p- sound) are associated with weakness, smallness, softness, fragility, calmness, thinness and a small quantity. Voiced consonants (such as “ga”, “ja” and “be”) give off the opposite imagery: strength, hardness, roughness, thickness and a large quantity. The consonant p- sounds (“pa”, “pi”, “pu”, etc.) carry the meaning of momentum, cuteness, lightness, sharpness and elasticity. 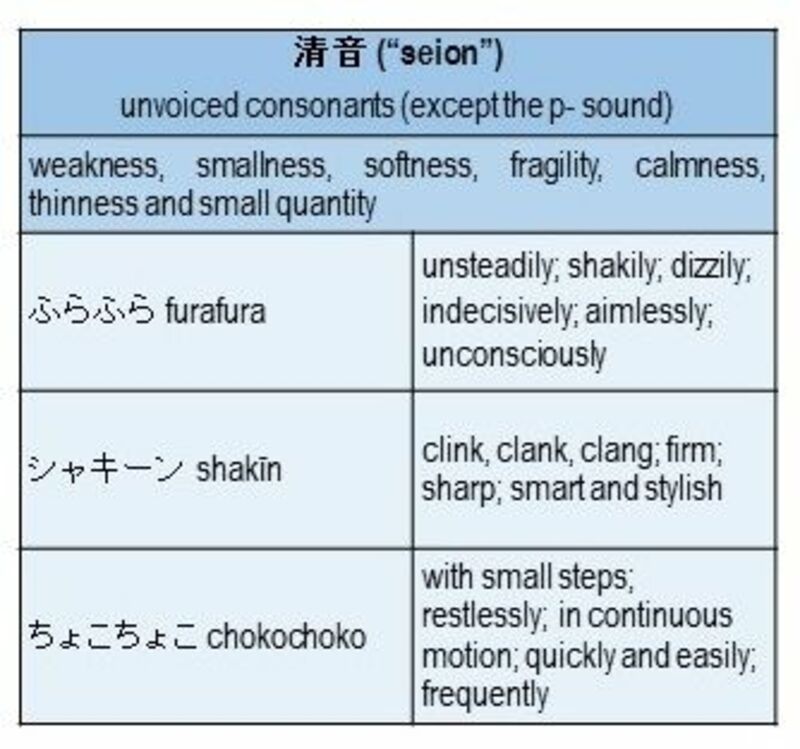 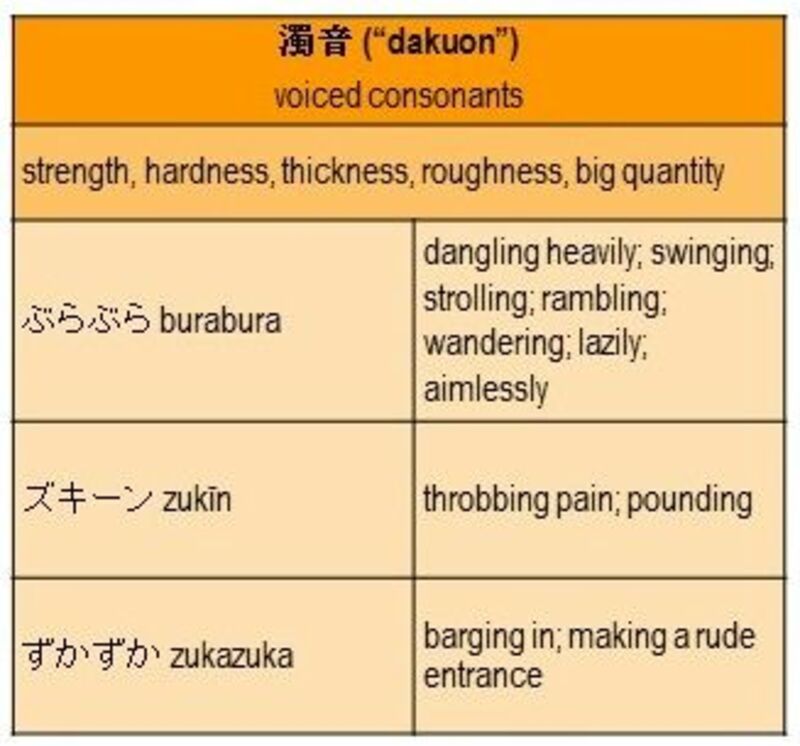 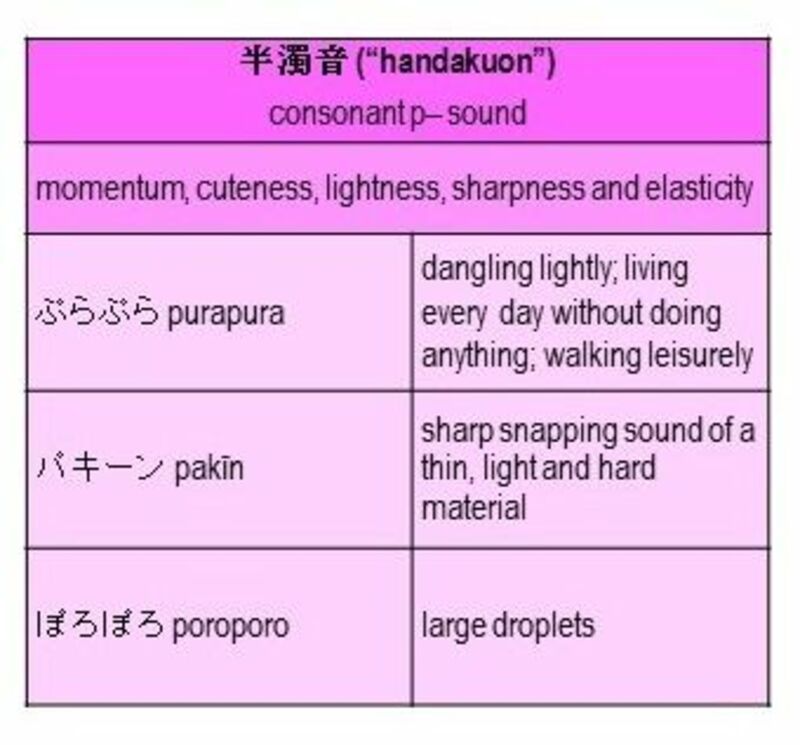 While not listed here, the other consonants of the Japanese kana system all have their own form of sound symbolism.

Sound symbolism also exists in the English language. The term, “phonestheme”, coined in 1930 by British linguist John Rupert Firth, is a particular sound or sound sequence that suggests certain meanings. Examples of phonesthemes in English include:

While not every word containing these combinations of letters always carry similar meanings, it’s clear that many phonesthemic clusters do possess recognizable semantic associations. Note that a phonestheme is different from a morpheme such as prefixes (e.g. sub-, pre-) or suffixes (-less, -er), because it does not meet the normal criterion of compositionality.

It was mentioned earlier that the Japanese vowel い (i) can mean thin or sharp, or that the vowel あ and お give off a large image. In the field of linguistics, some academics postulate that sound symbolism may even apply across multiple languages.

Detractors point to words like “small” (/smɑl/) and “big” (/bɪɡ/) as examples of words that directly contradict the aforementioned phonesthemic system. However, studies have been conducted that identify a correlation in sound symbolism across different languages.

According to a study entitled “What do English speakers know about “gera-gera” and “yota-yota”?: A cross-linguistic investigation of mimetic words for laughing and walking” (Iwasaki, Noriko; Vinson, David; Vigliocco, Gabriella; 2007), English speakers with no prior experience with the Japanese language were asked to listen to Japanese mimetic words for laughing (“giongo”) and walking (“gitaigo”) and rate their impression of each word’s meaning.

As it turned out, Japanese mimetic words for “laughing” were rated nearly the same by both native Japanese and English speakers. In contrast, for words referring to “walking”, English speakers’ ratings differed greatly from native Japanese speakers’. Thus, the study concludes that some sound-meaning associations were cross-lingual while others were language-specific.

With over two thousand Japanese memetic words, learning them all won’t be easy. As with any daunting task, the best approach is to take “choko choko” steps!