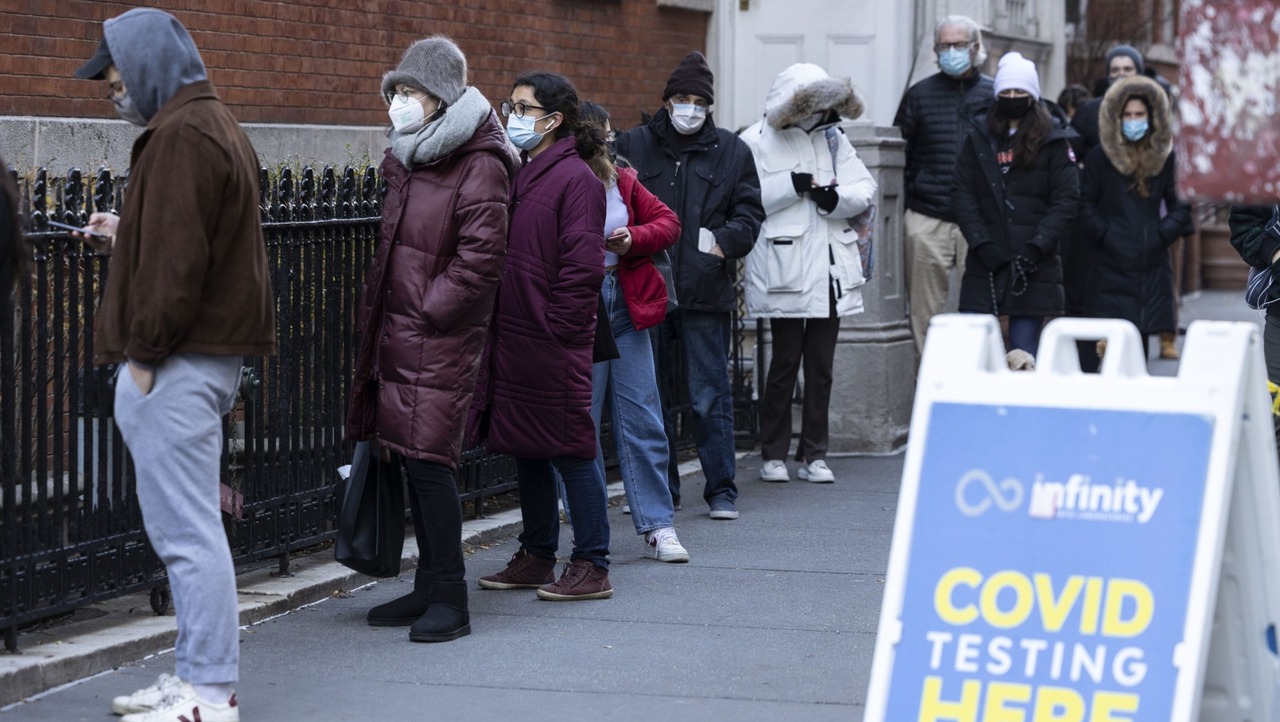 In cities all around the world, there are growing concerns over the latest COVID-19 mutation: the Omicron variant. Following the rapid spread of the Delta variant, the term “Omicron” has become the latest entry in our pandemic-related lexicon. In this month’s article, Hakoda-sensei explores the Greek alphabet after which the variants are named. And in the process, you might be surprised to learn all the ways these 24 letters are used in our everyday lives.

The Naming of Variants After Greek Letters

On May 31, 2021, the World Health Organization (WHO) announced that rather than using terms such as “the UK variant” or “the Indian variant” to label COVID-19 variants, the letters of the Greek alphabet would be used instead to avoid stigmatizing nations where the variants were first detected.

Below is a list of all variants thus far that have been named using Greek letters. 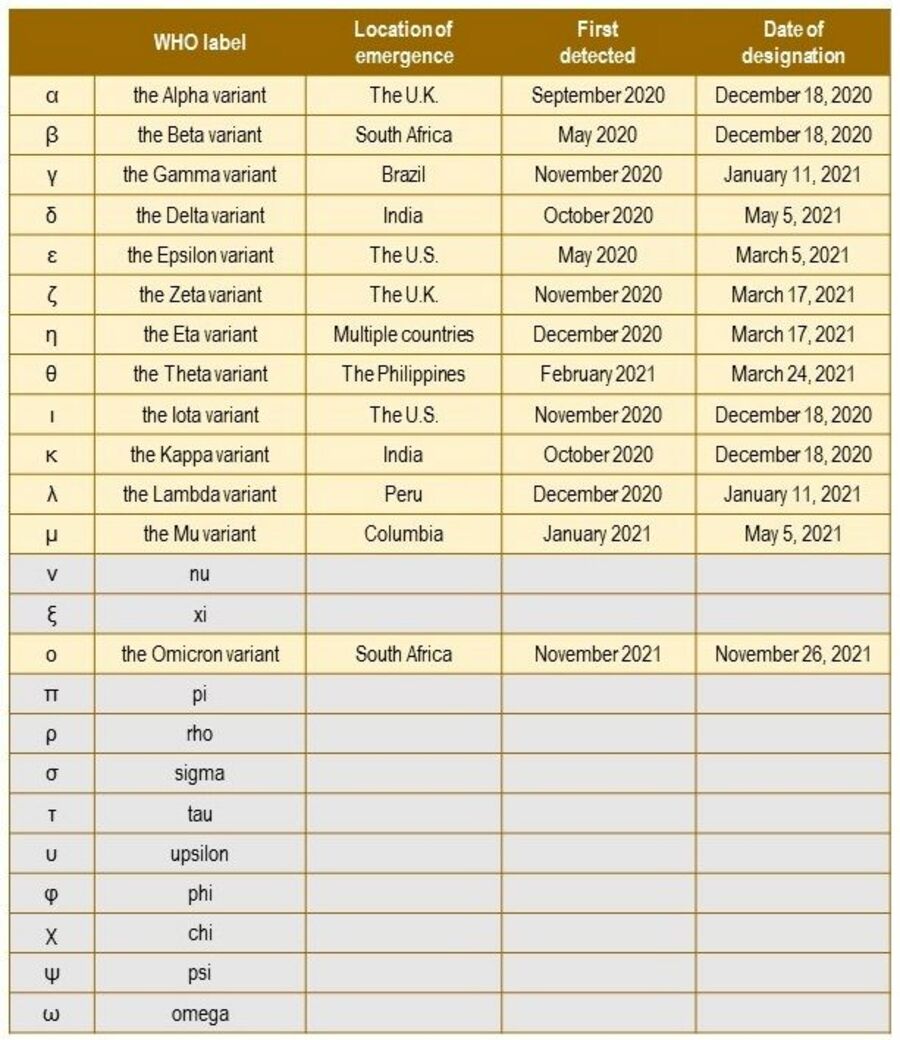 When the Omicron variant was first announced, there was a noticeable omission of the letters “ν” (nu) and “ξ” (xi). “ν” (nu) was skipped due to its similarity to the English word “new”. Imagine the confusion that would ensue when a “new variant” is mistaken for the “nu variant” and vice versa.

The media had also suspected that the reason the letter “ξ” (xi) was skipped was due to it sharing the same name as China’s leader Xi Jinping. According to a WHO representative, “’Xi’ was not used because it is a common last name.” This sounds fair—nobody wants to have their last name used to label viruses.

Nine more Greek letters remain. Once those have been used up, there’s been talks of moving on to constellation names. Imagine a future with the Cassiopeia variant, the Orion variant or the Andromeda variant. How these names will be ordered is anyone’s guess.

Depending on your country of origin, how you sound out the Greek letters will vary. With the help of the Longman Pronunciation Dictionary, Hakoda-sensei has compiled a list of Greek letters using both American and British pronunciations.
Let’s start with the first three letters: 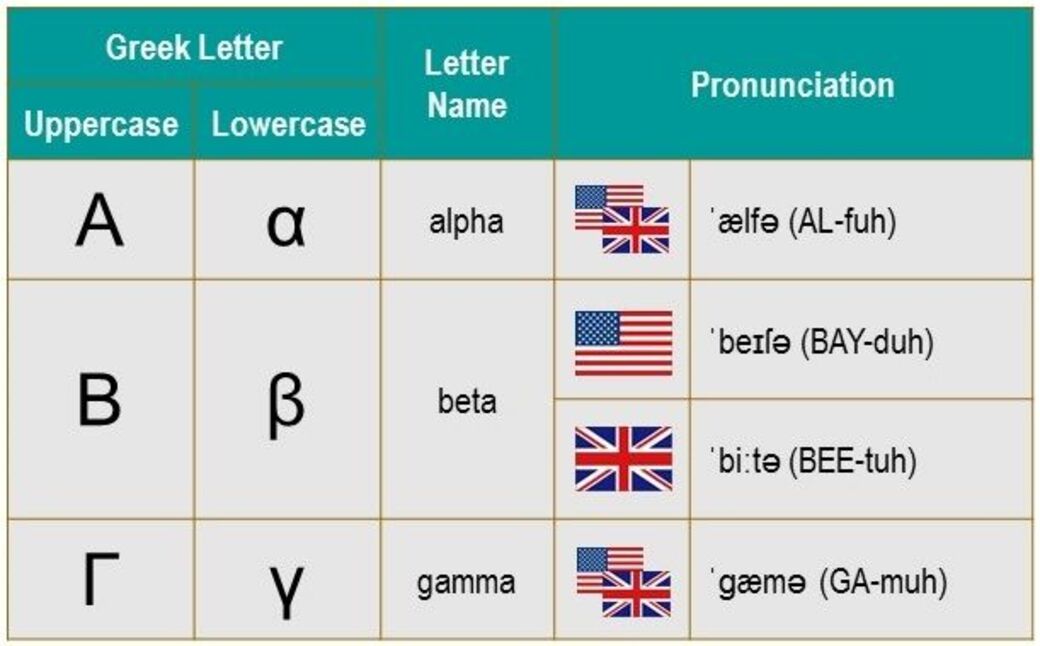 Americans pronounce the Greek letter “beta” with an /eɪ/ (“ay”) vowel sound, whereas the British stay closer to the original Greek pronunciation using the /iː/ (“ee”) vowel sound.

Most everyone is familiar with the first two letters of the Greek alphabet, “alpha” and “beta”. They are used to denote software releases, social behaviors, investment performances, radioactive particles, and a slew of other variables. They are so prevalent, in fact, that most people don’t even realize that the word “alphabet” is simply a blending of these first two Greek letters, “alpha + bet(a)”.

Speaking of generations, many Generation Xers will fondly remember the live-action TV series “The Incredible Hulk” which was likely their first exposure to the term “gamma rays”, one of the three main types of radiation named after Greek letters (with alpha and beta particles being the other).

Where the River Meets

Next, we have the Greek letters from “delta” to “eta." 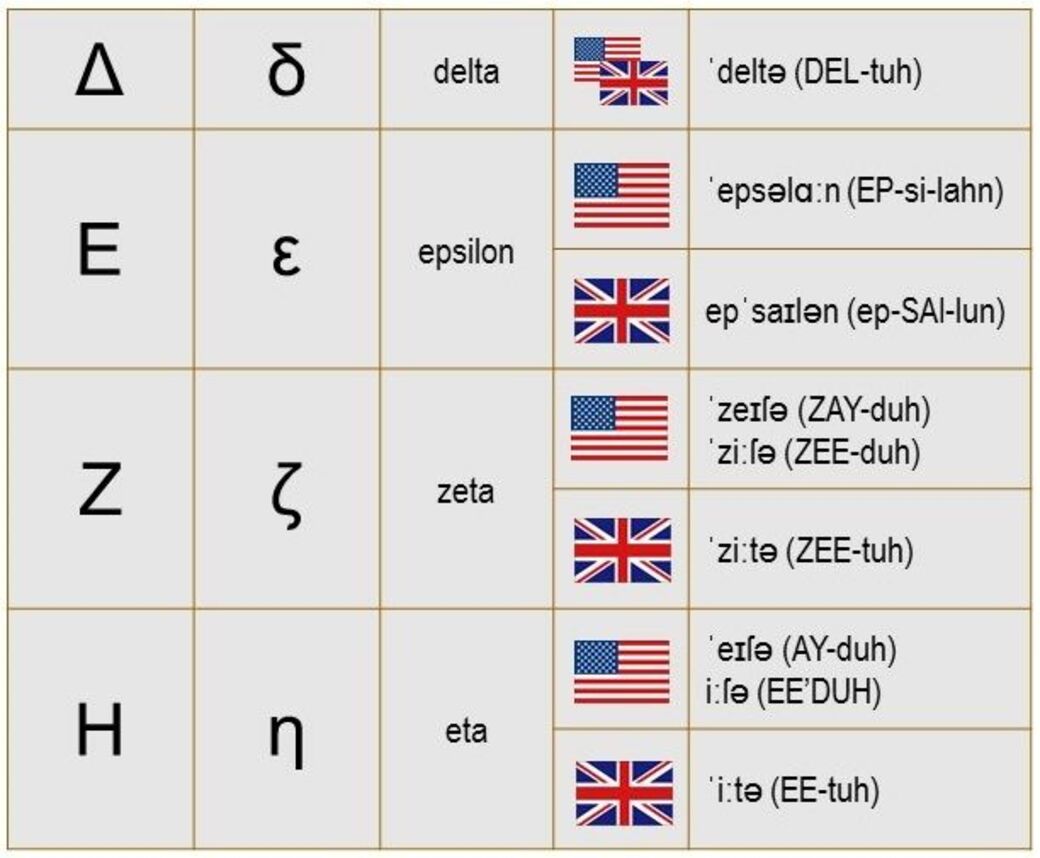 While the terms “epsilon”, “zeta” and “eta” are rarely used outside of mathematical physics and Greek-letter organizations, “delta” has managed to become a household term thanks to its distinct triangular uppercase shape.

A “river delta” is so named because of the triangular shape that forms when a river splits. The name “Delta Air Lines” also comes from the Mississippi Delta region, the company’s original principle area of operations.

Not An Iota of Truth

Refer to the following chart for letters “theta” to “mu.”

The lowercase “theta” (θ) can be found in the pronunciation symbol “/θ/” which represents the “th”-sound for which its Greek name contains. It’s also used as a variable in mathematics to represent an angle. The lowercase “mu” (μ), otherwise known as “micro”, denotes the prefix multiplier of 10-6 (or one-millionth).

The lowercase “lambda” (λ) represents the wavelength of the electromagnetic wave. If math isn’t your strong suit, how about fashion? Italian sportswear brand Kappa gets its name from the Greek letter “kappa” (κ).

We also have the expression “not an iota” or “not one iota”, used to emphasize a very small amount of something. The word “iota” was used due to its lowercase letter (ι) being the smallest in the Greek alphabet.

Next, we have letters “nu” through “rho.” 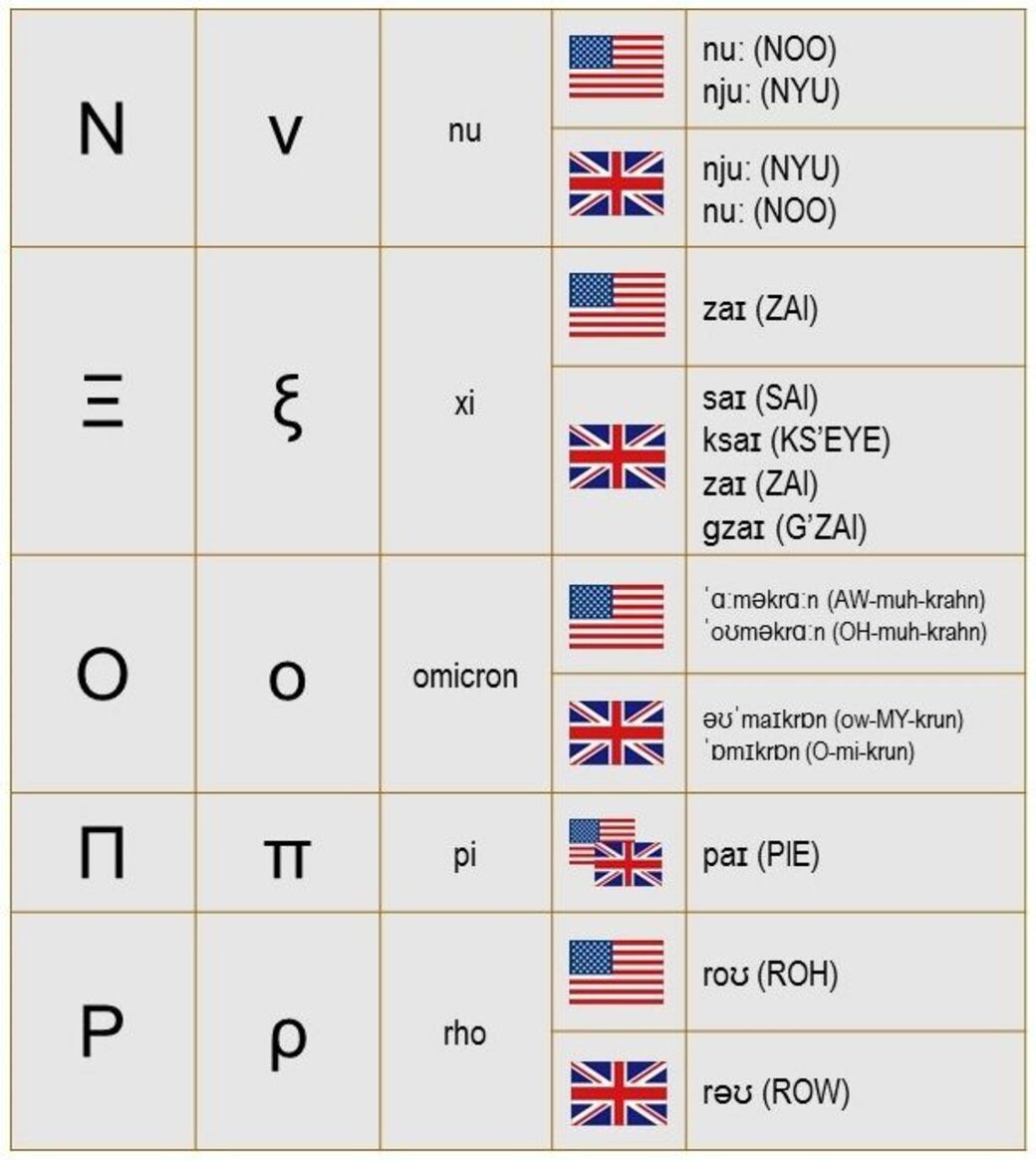 Like “pi”, “xi” uses the long “i” sound (/aɪ/). Longman Pronunciation Dictionary lists a total of four different ways to sound out the consonant sound in “xi”. The unvoiced /s/ and /ks/ sounds as well as their voiced counterparts.

“Omicron” too comes with four different pronunciations. In American English, the stress is placed on the first syllable with either an /ɑːm/ (“aw”) or /oʊm/ (“oh”) sound. With British English, the first or second syllable (“my”) may receive stress.

The etymology of “omicron” is particularly interesting when you break apart the “o” from the “micron”. We looked earlier at the representation of “mu” (μ) as “micro”. This comes from the Greek word for “small”, “μικρός (mikrós)”.

Hence, the letter “omicron” (ο) literally spells out “small ‘o’”. But why is such a distinction necessary in the first place? The final letter in the Greek alphabet is “omega” (ω). Like “omicron”, “omega” is a fusion of “o” and “mega”—in other words, “big ‘o’.”

“Pi” (π) is perhaps the most famous Greek letter, known as the ratio of a circle’s circumference. But did you know that this “pi” also has ties to many other English words? “Perimeter”, “period”, and “peripheral” all use the prefix “peri” which is Greek for “around”.

Thus, it was decided that the most appropriate symbolic representation for calculating the distance “around” the circle should be the initial letter “pi” derived from “peri.”

Lastly, we have the remaining letters from “sigma” to “omega”. 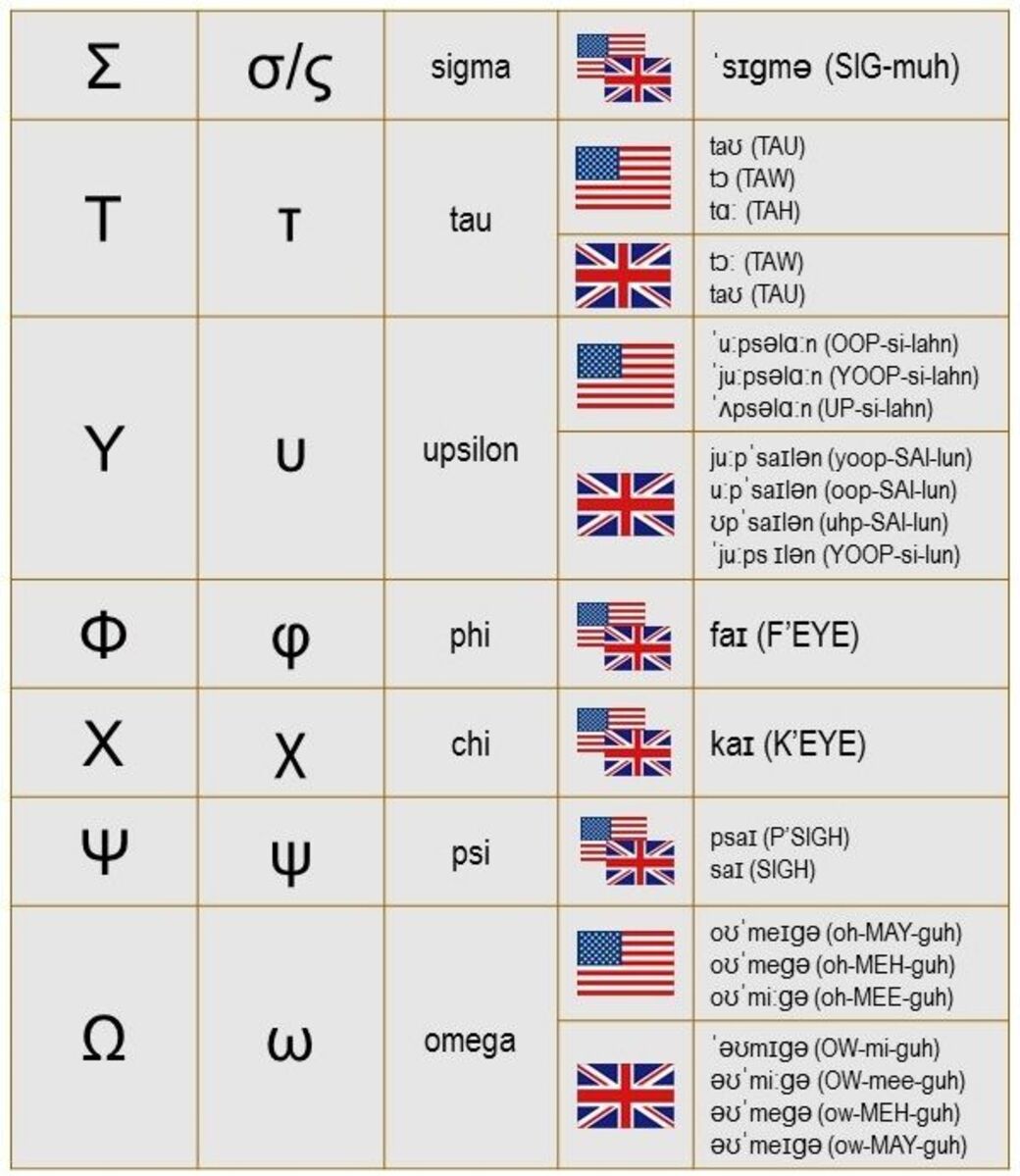 “Phi” (φ), “chi” (χ) and “psi” (ψ) all follow the same pronunciation principle as “pi” where the vowel “i” has an /aɪ/ (“eye”) sound. The vowel sound “au” in “tau” (τ) has many variations. “Upsilon” follows similar pronunciation patterns to “epsilon”, with the American English version placing the stress on the first syllable while the British English version places the stress on /saɪ/ (“sai”).

Looking at “phi” (φ), “chi” (χ), and “psi” (ψ) sheds light on some of the perplexing spellings known to the English language. For example, why are words like “physical” and “telephone” spelled with a “ph” despite having an “f”-sound? We have the Greek “phi” (φ) to thank. Using a “ch” spelling for /k/ sounds (e.g. “chorus” and “chemistry”) is also said to have come from the Greek “chi” (χ). The spellings for words like “psychology” and “pseudo” are also rooted in the Greek letter “psi” (φ).

“Xmas”, Not a Modern Convention

“Xmas”, the abbreviation of the word “Christmas”, has its fair share of detractors. Critics claim that replacing Christ’s name with a single X is disrespectful—a secularized attempt to “remove ‘Christ’ out of ‘Christmas’”. However, it should be noted that X had been used as an abbreviation of “Christ” for centuries. This makes sense when you look at the way “Christ” is written in Greek: “Χριστός” (Christós).

“Sigma” (σ) is the only Greek letter to have two lowercase symbols. The standard form is “σ”, but when used at the end of the word, a “final sigma” (ς) is used. An example of this can be seen in “Χριστός” (Christós). The first “s” is written “σ” while the second is written “ς”. The more familiar “sigma” is its uppercase form. In mathematics, the symbol Σ is used to denote a sum of multiple items. The “sigma” is used to represent the “s” for “summation”.

Greek Letters of the Book of Revelation

As mentioned before, “omega” (ω) means “big o”. There appear two o’s to differentiate between the short vowel sound of “omicron” and the long vowel sound of “omega”. One of the most famous references to “omega” comes from the line “I am the Alpha and the Omega” from the New Testament’s Book of Revelation.

The use of the first and last letters of the Greek alphabet (alpha and omega) is interpreted to mean “the eternal, all-encompassing nature of God”. The pair of letters “ΑΩ” is also used as a Christian symbol.

“Omega” may be a familiar term to the health-conscious as well. Omega-3 fatty acids can be found in fish oil supplements and are a rich source of EPA and DHA that are commonly found in perilla and flaxseed oil. Among other things, Omega-3 fatty acids have been shown to reduce blood pressure, lessen the chance of sudden cardiac death, protect against cognitive decline, and slow the development of plaque in the arteries.

There is also a Greek connection to “metabolic syndrome”, a serious health condition that puts people at higher risk of heart disease and other health problems. In Greek, “metabolism” (μεταβολή; metabolḗ) means “change”. “Syndrome” (συνδρομή; sundromḗ) is Greek for “symptoms which occur together”.

With all the feasts, sweets, and desserts that come with the holiday season, Hakoda-sensei implores his readers to remember the many teachings of the ancient Greeks.