Can You Name All 33 Olympic Sports?

And with only a few more days remaining until the closing ceremonies, now may be the perfect time to reflect back on the many sports, disciplines and events that these Games had to offer. Whether you’ve been following along on Japanese TV or catching the events on an English-language broadcast, sorting through the terminologies of the 33 sports, 50 disciplines and 339 events can be a bit of a headache. Hakoda-sensei is here to provide some clarification.

Let’s start with the categorizations of the different Olympic programs.

“Sport”, called 競技 (“kyōgi”) in Japanese, refers to all events governed by an international sports federation. “Canoe”, “aquatics” and “gymnastics” fall under this broad category. “Disciplines”, or 種別 (“shubetsu”) are a sub-category of a sport. For example, in the Olympic sport “canoe”, we have two “disciplines”: “slalom” and “sprint”.

A more specific category is called an “event” or 種目 (“shumoku”) in Japanese, and this is the level in which medals are awarded. For example, in the discipline “slalom”, there are four events: Men’s Canoe, Women’s Canoe, Men’s Kayak and Women’s Kayak.

Grasp the difference between these three terms (sport/discipline/event), and your Olympic-viewing experience will be a much more enriching experience. 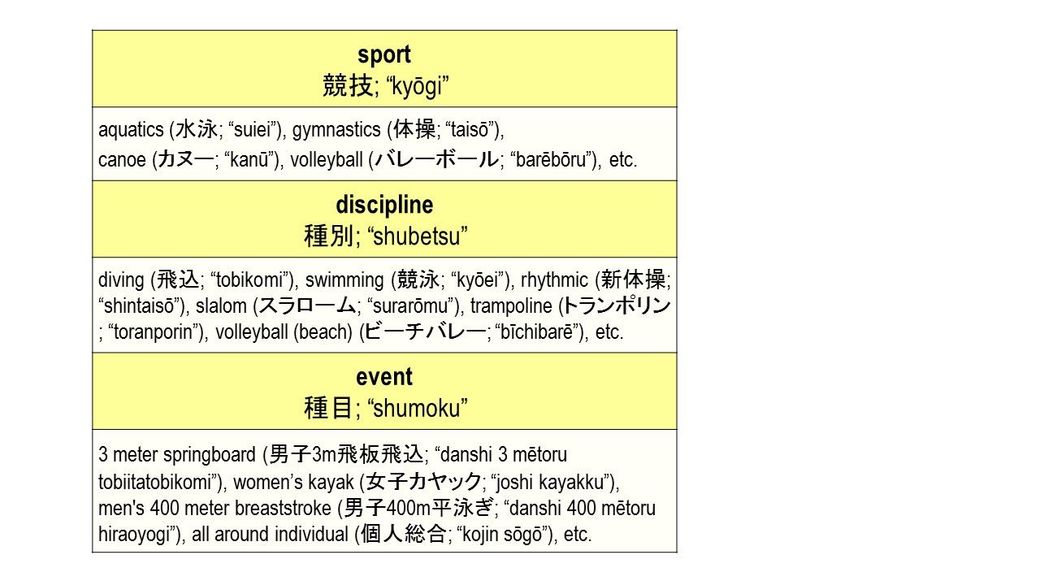 Here in Japan, it’s not uncommon to see events being referred to as disciplines, or disciplines being called sports. Terminologies can get confusing, so it’s best to think in terms of categorical levels when referring to specific sports, disciples or events.

Let’s take a look at how the English and Japanese names for each of the 33 sports compare. 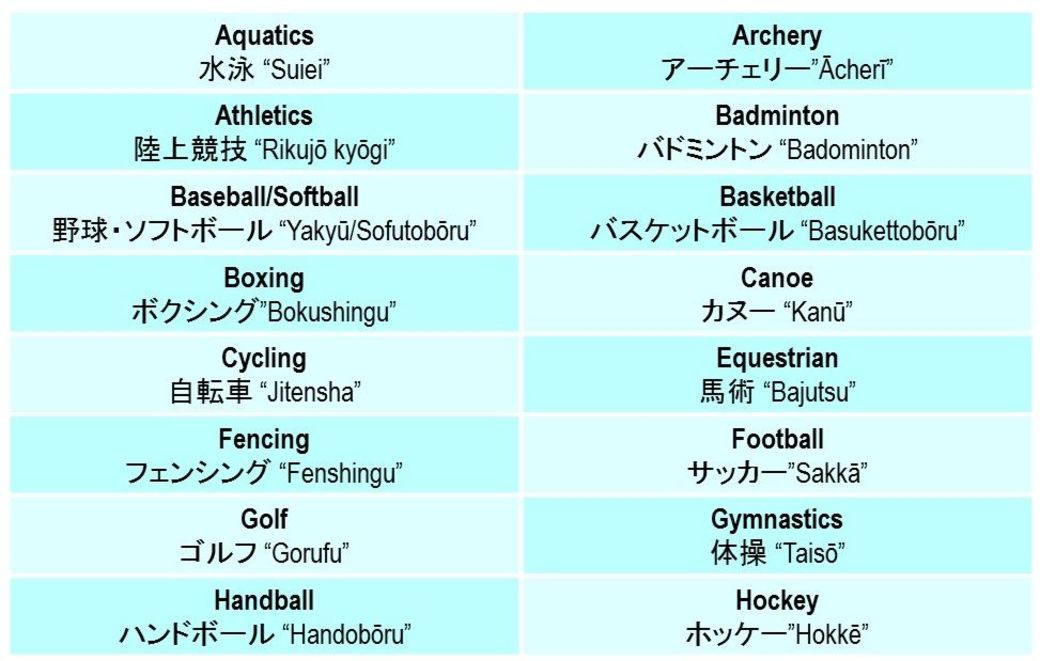 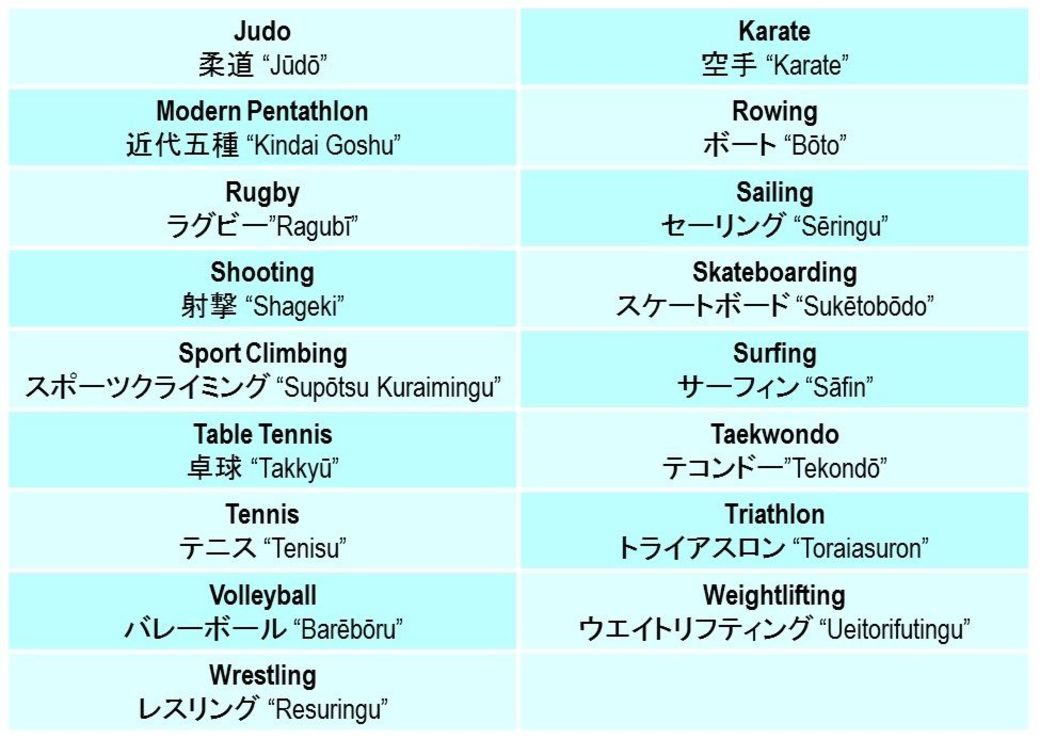 In Olympic terminology, swimming is not a sport, but rather a discipline. Although the Japanese word 水泳 (“suiei”) is often translated as “swimming”, the English term “aquatics” is used instead. In Japanese, 陸上競技 (“rikujō kyōgi”) is made up of the words “rikujo” meaning “track & field”, and “kyōgi” meaning “competition”. However, when it comes to the sport name in English, track and field events are lumped together with stadium and road events under the term “athletics”.

The sport “equestrian” is based on the English word “equine” (meaning “relating to or affecting horses or other members of the horse family”), which is derived from the Latin word, “equus”, meaning “horse”. In Japanese, the word for equestrian is made up of the characters 馬 (kun-yomi: “uma”, on-yomi: “ba”, English: horse) and 術 (kun-yomi: “jutsu”, on-yomi: “gi”, English: art/technique).

体操 (“taisō”) is the Japanese sport name for gymnastics. “Taisō” can also refer to general physical exercises such as the popular warm-up calisthenics “rajio taisō” (radio exercise). The sport “rowing” is called ボート (“bōto”), the katakanafication of the word “boat”. When referring to “taekwondo” and “karate” in Japanese, note the differences in pronunciation. “Taekwondo” is “tekondō” while “karate” is pronounced “ka-ra-te” rather than “kəˈrɑti”.

Let’s take a look at the Olympic sports, pentathlon and triathlon. In Japanese, modern pentathlon is called 近代五種 (“kindai goshu”). “Kindai” means modern and “goshu” is short for “goshu kyōgi” or “a contest featuring five different sports”. トライアスロン (“toraiasuron”) is simply the katakana form of the word “triathlon”. 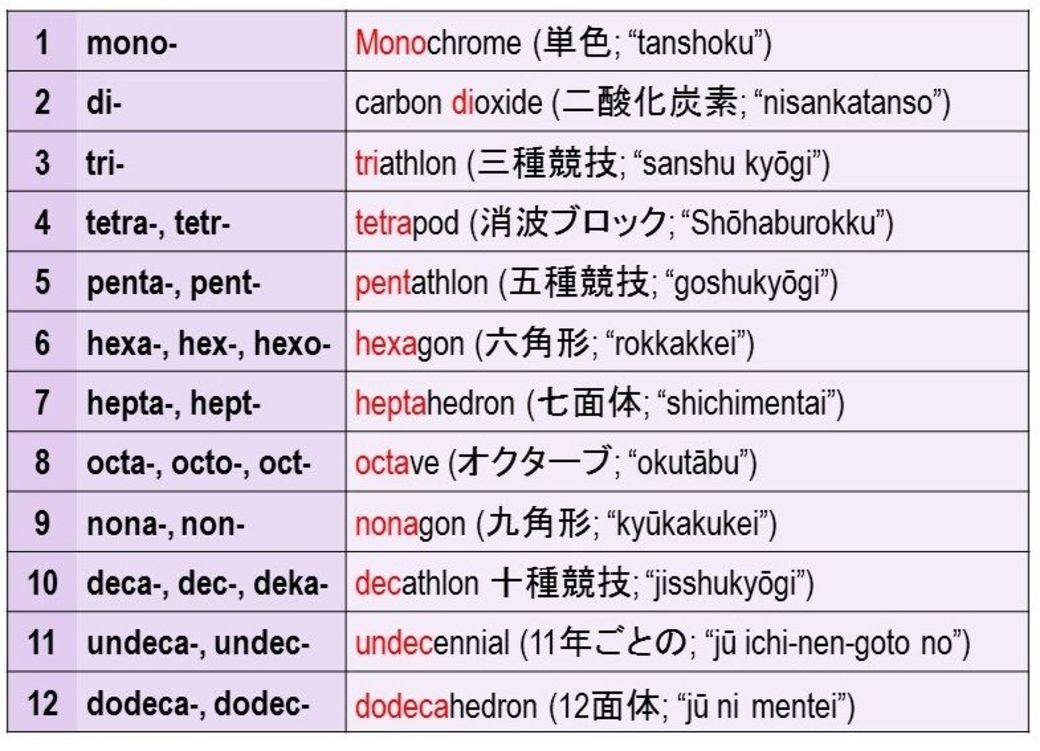 “Mono” (1) and “chrome” (color) together make up the word “monochrome”, which is used to describe images composed of only one color. “Tetrapods” are tetrahedral-shaped structures used along coastlines to prevent erosion caused by weather and longshore drift. The name is derived from “tetra” (4) and “-pode” (foot), and in Japan, “Tetrapod” is used as a generic term for all wave-dissipating blocks. It is estimated that over 50% of Japan’s 35,000 km coastline is covered or altered by these concrete structures.

Greek numerical prefixes can be found all throughout the English language, and some are so common that we may not even realize they’re numbered in the first place. “Octo” (8) + “pous” (leg) for “octopus” and “decade” from the Ancient Greek word “decas” meaning a group of 10, are just some of the many English words that indicate its meaning through numbers. 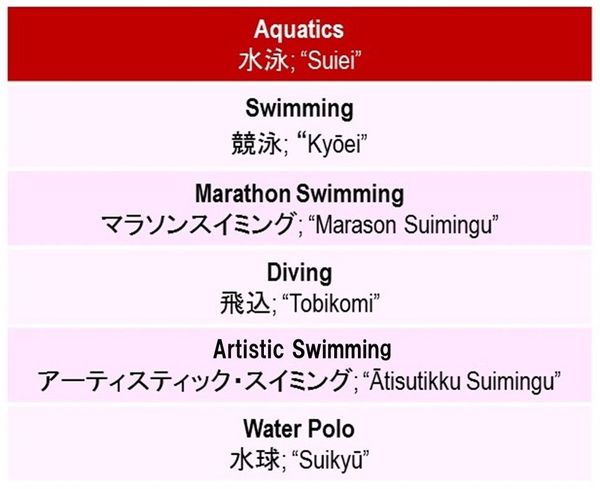 What was once referred to as “football in the water”, “water rugby” and “aquatic football” is known nowadays as “water polo”. “Polo” is said to have been derived from the Balti word “pulu”, meaning “ball”. More straightforward is the name “suikyū” which is made up of the words 水 (kun-yomi: “mizu”, on-yomi: “sui”, English: water) and 球 (kun-yomi: “tama”, on-yomi: “kyū”, English: ball).

The three-on-three format has been played in streets and local gyms across the world. The rules have been standardized and made into an international competition. While some people may still refer to it by its playground name (“3-on-3”), according to FIBA (International Basketball Federation), the world governing body of basketball, the official name of the sport is 3x3 (read “three-ex-three”). Note that this is the same in both English and Japanese.

Canoe captured the attention of Japan when Takuya Haneda became the first Japanese canoeist to win an Olympic medal, winning Bronze in the C1 event at the Rio De Janeiro Games. The sport contains the following two disciplines:

Slalom is the competition whereby the canoeist must navigate through a course of hanging gates in the fastest time possible. Pronunciation of “slalom” differs slightly between English (ˈslɑləm) and Japanese (“surarōmu”). Sprint is a flat water racing competition with distances of 200m, 500m, and 1,000 meters. The events involve one, two, or four paddlers and are designated by the types of boats used: canoes (C) or kayaks (K). So, for example, C-1 is “canoe singles” while K-2 is “kayak doubles”.

Terms used for cycling are the same in both English and Japanese: 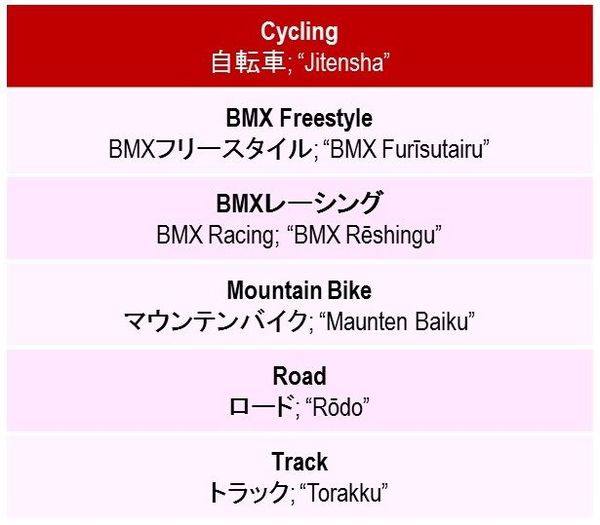 Track consists of twelve events, six each for both Men’s and Women’s. Among them is keirin, a form of track racing first developed in Japan. “Keirin” is made up of the characters 競 (kun-yomi: “kisou”; on-yomi: “kyō”/”kei”; English: compete/competition) and 輪 (kun-yomi: “wa”, on-yomi: ”rin”; English: ring/wheels). Together, 競輪 (“keirin”) means “racing cycle”. To avoid confusion with other forms of track races, the event is referred to by its original Japanese name and is written out in katakana as ケイリン. Judo and karate were not the only Japan-born Olympic events. 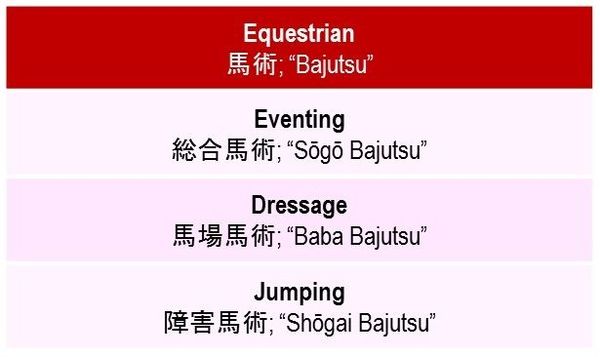 Eventing (総合馬術; “sōgō bajutsu”) is a 3-day event where a single horse and rider compete across the three disciplines of dressage, cross-country and jumping. Using a penalty point system, the horse and rider with the fewest points after three days wins the event. Cross-country presents various obstacles such as bamboo fences, hedges, ponds, moats, dry moats and other natural-based obstacles.

In Dressage (馬場馬術; “baba bajutsu”), the horses are tested based on the precision and grace of their movements. In French, “dressage” can be translated as “training”. Thus, this competition looks to determine which horse is most trainable. There are three recognized gaits in dressage: walk (常歩; “nami-ashi”), trot (速歩; “haya-ashi”) and canter (駈歩; “kake-ashi”).

In Jumping (障害馬術; “shōgai bajutsu”）, the horse and rider must jump obstacles of various colors and shapes in a particular order and in the fastest time. Placings are based on the lowest number of faults and penalties accumulated.

Gymnastics has three relatively well-known disciplines. They are: 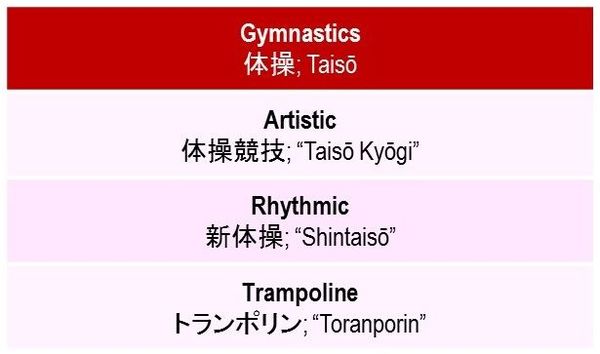 Trampoline, as was brought up in an earlier article, is a genericized trademark. The official generic form of this word is “rebound tumbler”. At one point in time, the sport was also called “rebound tumbling” before officially adopting the “trampoline” moniker.

Karate was a sport that was added for the Tokyo Olympics. Like the sport name “karate”, the two disciplines also share the same name in both English and Japanese.

Rubgy Sevens is the lone discipline in the sport of rugby. Unfortunately, Rugby Fifteens did not make the cut. The lengths of 15-player rugby and the recovery time required for the players make Rugby Fifteen an unrealistic choice for the Olympic Games. However, fewer players on the pitch means a fast-paced, action-packed form of rugby.

Terms used for wrestling disciplines are also quite similar in English and Japanese. The differences between the two styles of wrestling, Greco-Roman and freestyle is that in Greco-Roman, scoring is not allowed below the waist. On the other hand, leg attacks and trips are allowed in freestyle wrestling. Freestyle has events for both males and females, whereas Greco-Roman is for males only. Both disciplines are separated by weight class.

Were you able to identify all 33 sports of the Tokyo Olympics? As unfortunate as it was for spectators to be banned from the events, we hope you were able to root for your favorite athletes and countries from home. It’s also interesting to check the international names of the countries present for the Games.