CELLS AT WORK-A Cellular Fusion of Entertainment and Education 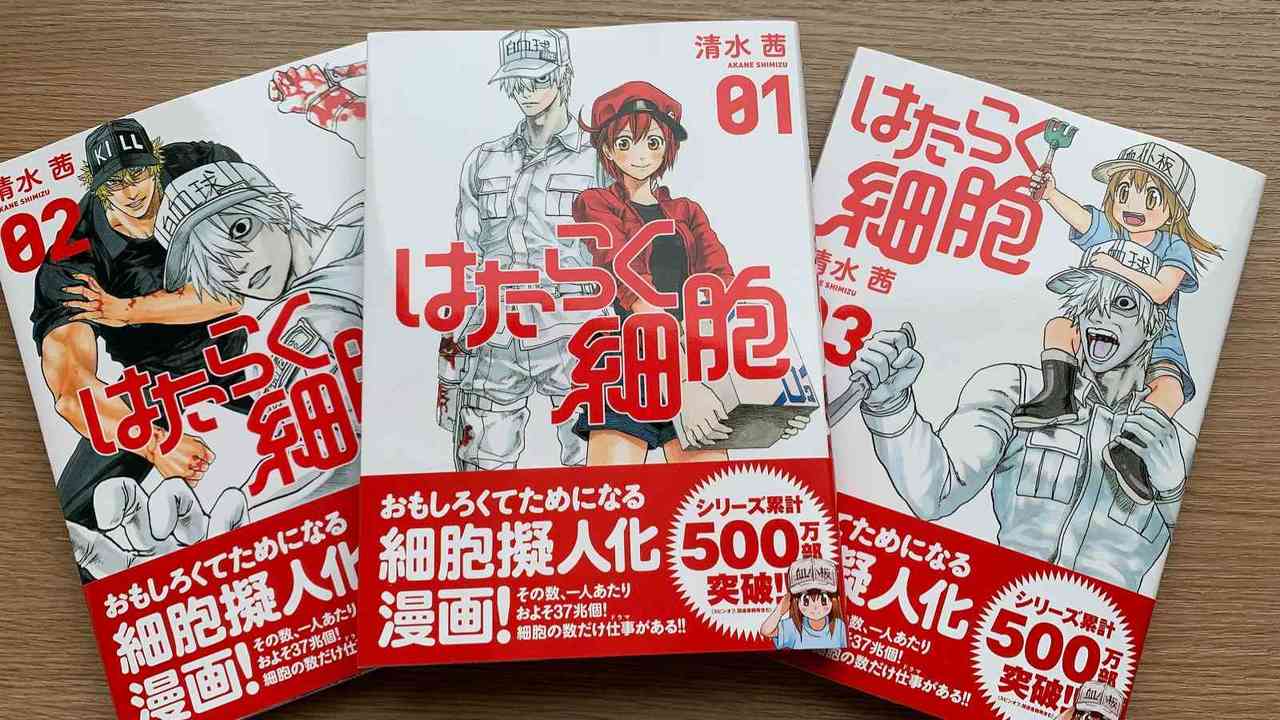 There’s a new manga in town which is garnering attention from comic book readers of all ages. If you’re anywhere in Japan, you’ve likely already seen or heard about this hit series: “Hataraku Saibō”, or by its English name, “CELLS AT WORK!”

Written and illustrated by Akane Shimizu, CELLS AT WORK takes a unique approach to shonen manga by fusing together traditional manga elements such as action and humor with cellular facts normally found in biology textbooks. It beautifully weaves its storytelling with analogous exposition on how the cells in the human body fight off external forces to maintain health and order.

The series originally got its start when the creator’s sister, who was then a high school student, requested a manga to help her make sense of biological terms for her school exams. At its heart, CELLS AT WORK aims to provide an accurate and enthralling representation of how the human body’s immune system fights off outside invaders.

The educational benefits of this manga are so revered that schools all over Japan are requesting the use of characters from CELLS AT WORK in their school materials. This prompted the creator to offer official content from the series on its official website, free to download for educational purposes.

Hakoda-sensei has decided to read through Hataraku Saibō in English. There’s plenty to be learned simply by reading this series in Japanese. But for those looking to learn a subject and a second language at the same time, Hataraku Saibō (available in multiple languages) may be the perfect manga for you. In this article, Hakoda-sensei brings language to life by analyzing the translation work that turned “Hataraku Saibō” into “CELLS AT WORK!”

The Japanese title, Hataraku Saibō is made up of the words “hataraku” (働く; to work) and “saibō” (細胞; cell). Hence, Hataraku Saibō means “working cells” or “cells that work”. The English title, “CELLS AT WORK!” is catchy and on point. It borrows from the expression, “men at work”, which envisages people in hard hats getting their hands dirty while diligently going about their work. This parallels well with CELLS AT WORK, a story which centers upon a society of hardworking cells whose goal is the health and wellbeing of the body itself.

Next, let’s take a look at the main protagonists of the story: the Red Blood Cell and the White Blood Cell.

The manga also features Platelet (血小板, Kesshōban), a type of cell depicted as cute, little kids who act as the construction and repair crew of the body.

In both the Japanese and English versions of the manga, a description of each character’s abilities is provided. Let’s look at how each is translated. 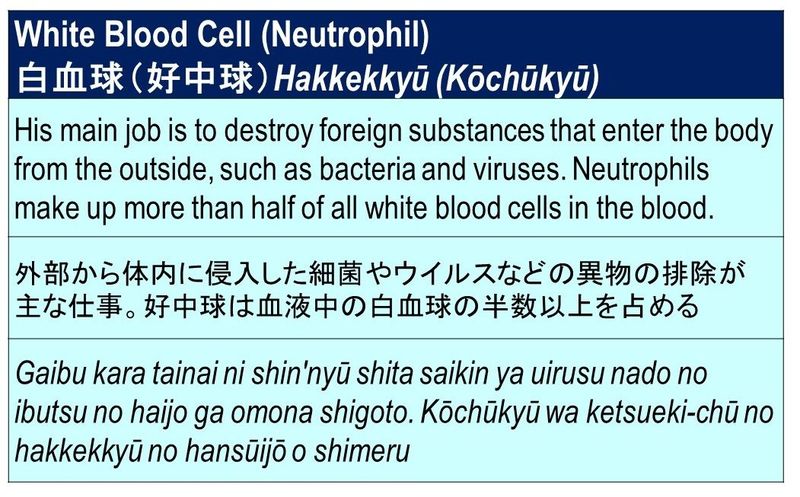 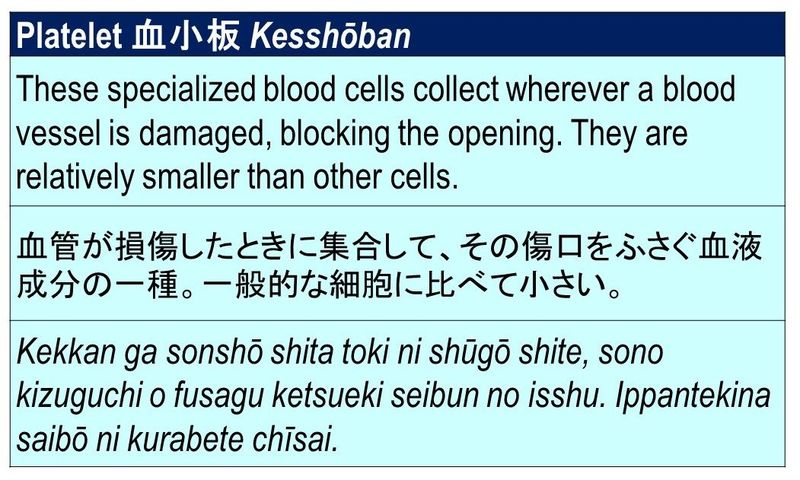 Many types of white blood cells appear in the manga and some of the main ones are highlighted below. We begin with the remaining two types of granulocytes (with the other being a Neutrophil, à la ‘Mr. White Blood Cell’). The other two types are Eosinophils and Basophils. 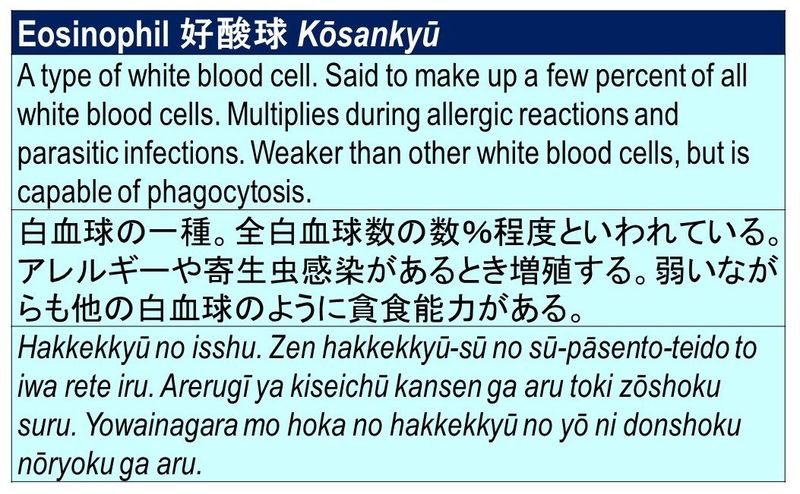 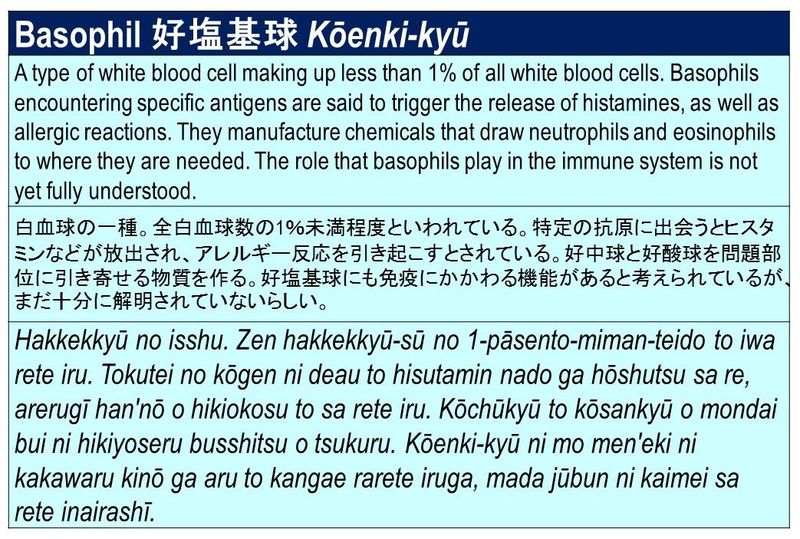 Each of the three granulocytes contain the character好 (kō), which means “to like or love”. Similarly, as can be seen in “neutrophil”, “eosinophil” and “basophil”, the suffix “phil” derives from a Greek word meaning “to love”. Other words containing “phil” include “philanthropist” (a person who seeks to promote the welfare of others), “philobiblist” (a lover of books), “xenophile” (a person attracted to foreign peoples, cultures or customs) and “audiophile” (a person who is enthusiastic about high-fidelity sound reproduction).

Next, we have Monocyte who works with the white blood cells. In the manga, Monocyte wears a gas mask and a hazmat suit. But when she isn’t in the blood vessel, she removes her hazmat suit to reveal her Macrophage form—an apron dress symbolic of her role as a nanny and a cleaner. What’s more, she wields a large machete and deals massive amounts of damage to bacterium. 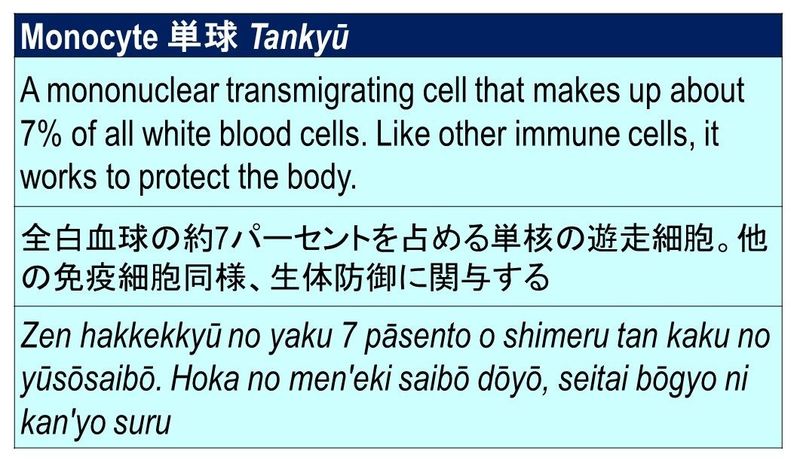 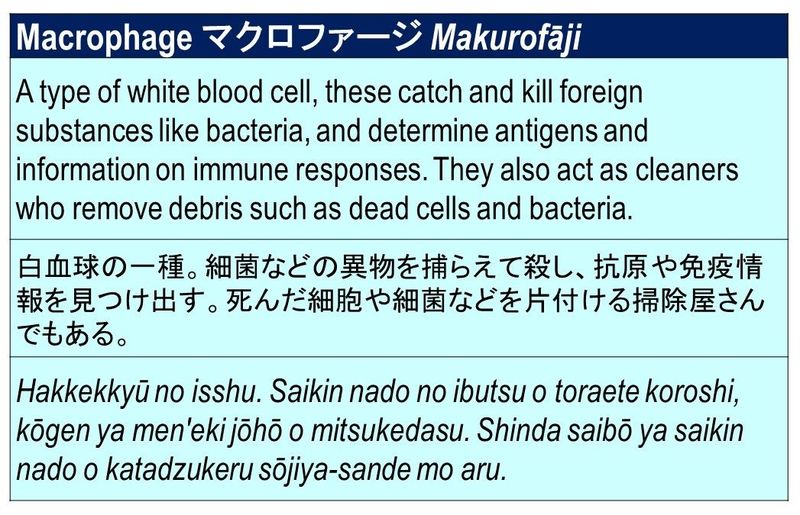 Langerhans Cell, a member of the Dendritic Cell of the epidermis, is depicted as a tuxedo-wearing butler. His look is far different from other Dendritic Cells (樹状細胞, jujōsaibō) who wear green uniforms and peaked caps. The color used in the Dendritic Cells’ uniforms are representative of the cell’s natural, tree-like aesthetic. The word “dendritic” come from the Greek word dendron, meaning “tree”. Similarly, the Japanese word for “dendritic” contains the kanji 樹, an alternative form to the word 木 (ki; tree). 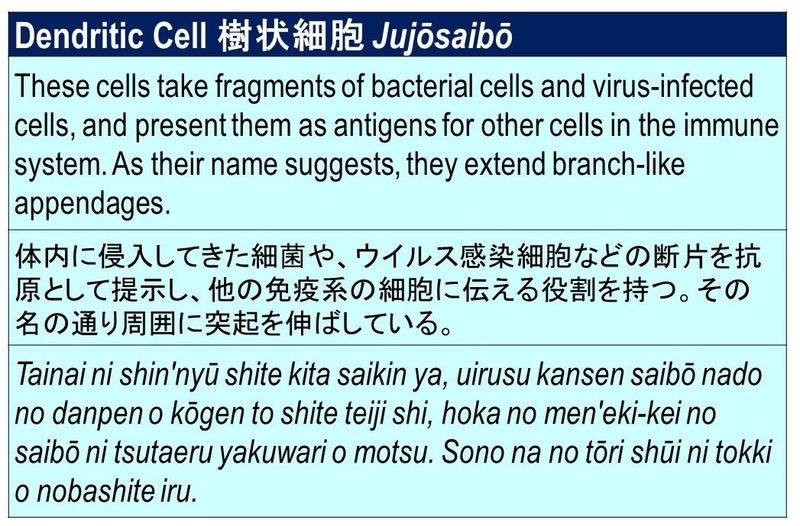 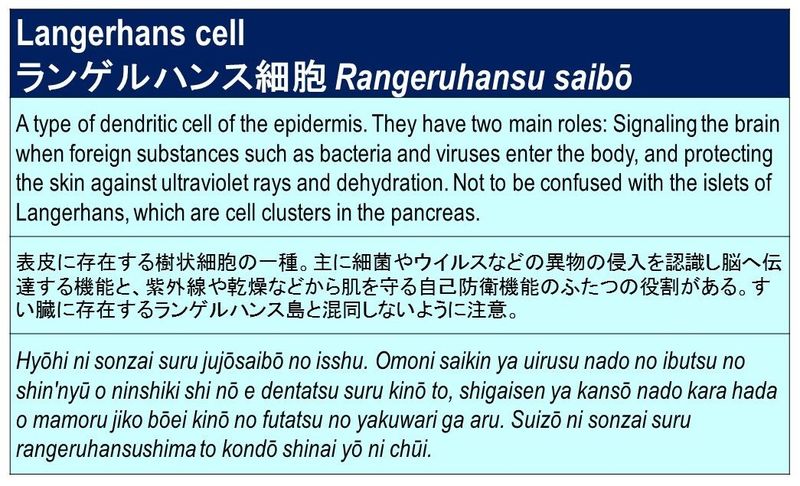 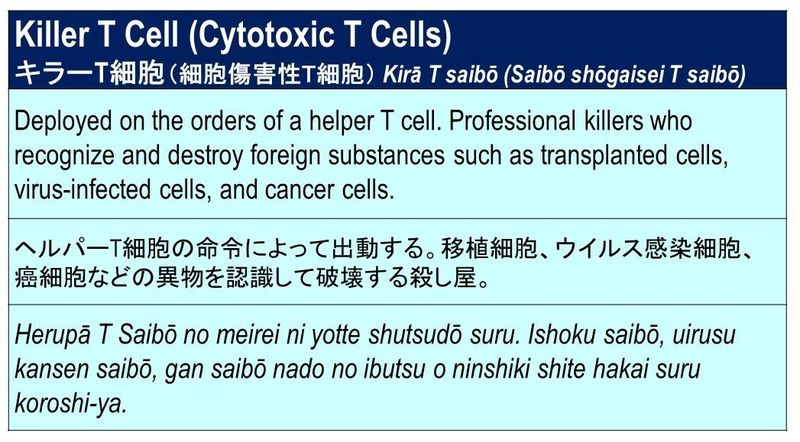 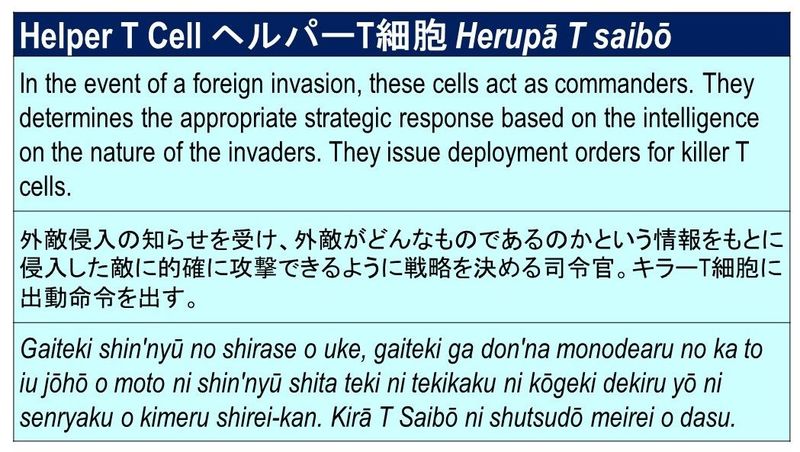 Let’s look at the remaining lymphocytes as well. We have the aggressive Natural Killer Cell (NK細胞, NK Saibō) and the youthful B Cell (B細胞, B Saibō), both of which play a pivotal role not only in the story but in the human body’s ability to terminate bacterium.

There are dozens of other characters introduced in CELLS AT WORK. Through these anthropomorphized cells, we can all gain a better understanding of the inner workings of our bodies. Many of these terms you may remember from biology class, but to see it in manga form will help put things in much clearer perspective. And by reading the Japanese version, you’ll also pick up some important health and medical terminology along the way.

“CELLS AT WORK!” became the first Japanese animated series in 14 years to air on China’s state TV station, CCTV, a testament to the educational benefits this anime offers. Whether you’re looking to be entertained, brushing up on your knowledge of the immune system, or learning a new subject in a second language, CELLS AT WORK is a masterfully crafted tale that will enlighten and educate just about any reader. Your cells will thank you—or rather, you’ll be thanking them for all of their hard work!