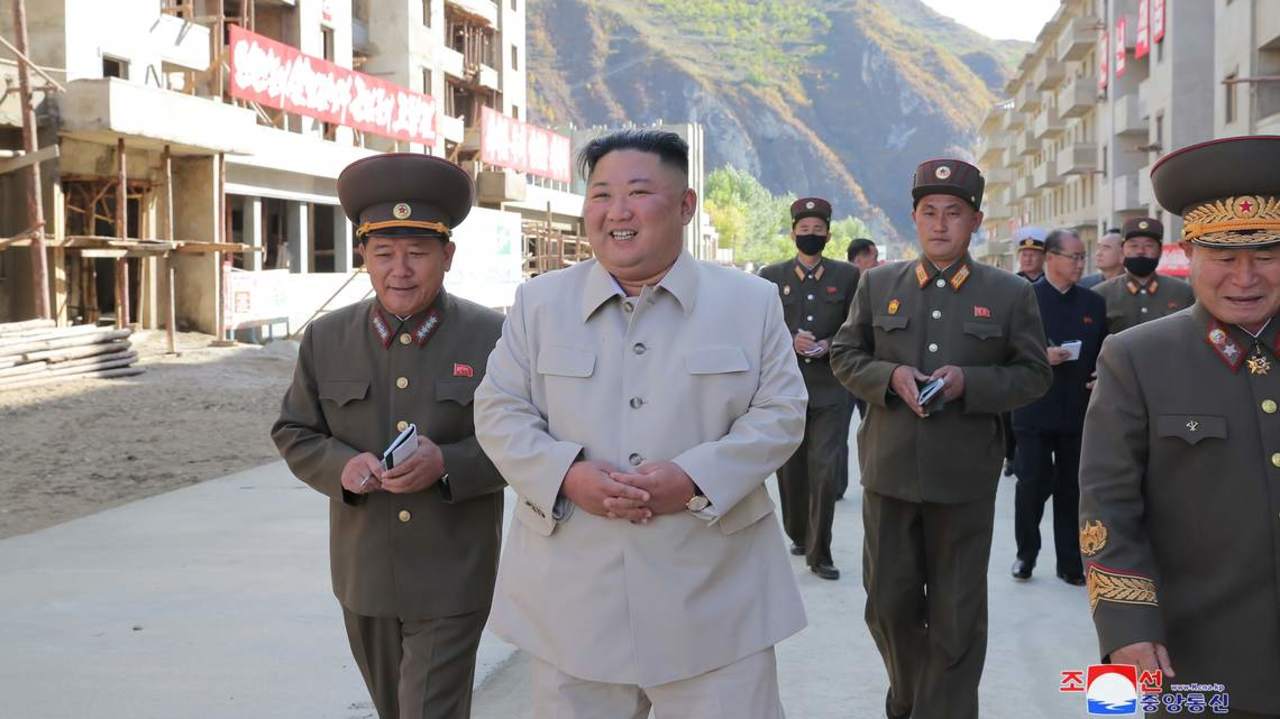 (Photo by KCNA/Handout via Xinhua）

Russian leader Vladimir Putin and China’s Xi Jinping were pointedly slow to congratulate Joe Biden on his election victory. Their unhappiness with the outcome was easy to understand since Putin and Xi clearly profited from Trump’s chaotic dismantling of American authority and power.

But no leader was probably more saddened by Trump’s departure than Kim Jong Un. As of late December, the North Korean leader had yet to tell his people about the imminent departure of Donald Trump. Why?

The North Korean economy will shrink by 10 percent this year, according to leading South Korean expert Kim Byung-Yeon, on top of a similar drop since 2017. The command economy barely functions, a long-term problem compounded by the pandemic, which forced the near-total closure of the border with China, along with natural disasters.

The parallel market economy is starved of imports to sell and hard currency to buy them. North Korea’s economic collapse is already two-thirds of the downturn suffered during the famine years of the mid-1990s, itself dwarfed only by the Korean war, says Kim.

With Trump leaving power, Kim’s hopes of wriggling free of the crisis through sanctions relief while finally being recognized as a nuclear weapons state are now dashed. “It is a very tough time in Pyongyang for Chairman Kim,” says former Central Intelligence Agency analyst Bill Brown. Clearly feeling the walls close in, Kim lashed out at the failures of his own government at a late November meeting of the ruling Korean Workers Party (KWP) Politburo.

In January the KWP will hold its 8th Party Congress with the future course of the regime potentially at stake. Will it retreat from market reforms and move back to more state control? Will Kim carry out provocative tests of long-range missiles or nuclear warheads, aimed at forcing the Biden administration to resume negotiations and restoring leverage to gain economic relief?

The scenario of an early move to test the Biden administration, similar to what took place at previous changes of power in Washington, has been widely touted in world media. But most well-informed experts consider that far too risky, given the internal crisis.

“Military provocation is not an easy option,” South Korean expert Kim, who teaches at Seoul National University, told me. Kim may succeed in getting the attention of the Biden administration and push North Korea up on the priority list, but “the likely consequence will be that the sanctions will just get stronger. Moreover, this may undermine North Korea’s relations with China, which is afraid of destabilization in the Korean peninsula and thus may subsequently act to reduce economic assistance and more tightly enforce the sanctions. These will cause greater pain to the economy which already is hit very hard.”

Holding to the current status quo poses its own problems. “I think Kim Jong-un’s options are very limited because the risk substantially increases in either case,” says Professor Kim.

The North Korean regime faces a populace that is increasingly independent of the state and depends more on the market to survive. “They will demand improvement in their welfare more actively than in the 1990s. This will be significant pressure on Kim Jong-un,” he told me.

The experts do not predict a popular uprising. “The DPRK (Democratic Peoples’ Republic of Korea) is a very long way from a popular uprising, as people are way too intimidated to rise up,” says Russian-educated scholar Fyodor Tertitskiy, a North Korea expert at Seoul’s Kookmin University. But unrest is already evident from the steps taken in recent months by the regime to crackdown on what it calls “anti-socialist” activity such as viewing foreign films and other media, particularly coming from South Korea.

Cracking down on the market economy

The clearest indication of the pressures on the regime is new steps in recent months to restore party and state control over the market economy and to rein in the emergent business class – the donju.

An attempt to force them to give up hard-earned foreign currency to buy state-issued bonds denominated in North Korean won apparently, and predictably, failed by September. But the efforts to soak up badly needed hard currency have not stopped – reflected in a strange recent speculative rise in the value of the North Korean currency on unofficial markets.

The inability of the state sector to actually deliver goods, however, means the market cannot be stamped out. “There is still overall movement toward liberalization of markets,” the former CIA analyst Bill Brown told me. “What we see is the regime trying to put on brakes.”

The Covid pandemic has added to all these woes. Most experts dismiss the regime’s claims of zero infections. South Korean analysts believe there was a serious outbreak earlier this year, leading to the almost total shutdown of the border, manifested in the disappearance of many consumer goods from shelves, even in the stores serving the privileged elite in Pyongyang.

The pandemic has been convenient for those opposed to liberalization and market reforms. “The lockdown mentality fits very well with control fanatics in Pyongyang so they go way overboard, especially on border closing,” observes Brown. “It is very damaging to the market economy, so party stalwarts love it.”

The regime has survived the last year thanks mainly to the willingness of its only ally, the Peoples Republic of China, to keep it from collapse. Officially, as measured in Chinese statistics, trade has fallen to near zero this year. But reports in Japanese and U.S. media point to significant flows of Chinese food, fertilizer and energy resources, with some growing amount of unofficial North Korean exports of coal and minerals and other goods.

There are limits, however, to what China can, or is willing to provide. “China can provide them with some assistance to keep them afloat, but not enough to facilitate actual sustainable growth,” says Tertitskiy, who contributes to reliable NK News, on online publication.

“The Chinese are not committing major resources,” agrees Jonathan Pollack of the Brookings Institution. “They will want will see evidence of restrained behavior by North Korea that convinces them there are reasons to do more.”

Even if China tries to use its economic leverage, Pyongyang has often defied Chinese warnings in the past. The proud display of new North Korean long-range missiles and other modernized military equipment in a massive parade in Pyongyang in October was a clear reminder that North Korea retains the power to disrupt the current relative calm.

“Ideally, of course, the Chinese would like to use their unique position to extend a greater influence upon the North, but they know that instability in the North is not in their interest and that Kim Jong-un would rather risk a total economic collapse than allow the DPRK to be subjugated by China,” says Russian scholar Tertitskiy.

Historically, the North Koreans have also turned to South Korea to bail them out, especially the progressive governments that have ruled in Seoul. South Korea’s Kim Dae Jung funneled massive food, fertilizer, and hard currency aid to the North to relieve the famines of the 90s. The return of conservative rule in 2008 brought that aid to a halt.

The progressive government of Moon Jae-in came to power in 2017 intent on engagement with North Korea, combining talk of grand economic projects to tie the two Koreans together with offers to restore the smaller scale efforts closed down by the conservatives.

After some initial warming of ties, the North Koreans have turned down any offers from the South – in June they defiantly blew up an office dedicated to cross border cooperation and recently pledged to restore the closed South Korean created industrial park in Kaesong completely on their own.

North Korean media treats the south with disdain, despite almost desperate efforts by the Moon administration to reinvigorate North-South ties, including a recent ban on activities by anti-regime activists in the South. Pyongyang is openly frustrated by Seoul’s continued commitment to observing the United Nations sanctions regime against the North. Seoul is not willing to openly defy the United States, still hoping it can lure Washington back into another attempt to negotiate a deal which would trade sanctions relief for a partial rollback of North Korea’s nuclear weapons program.

At this point, there are voices among Biden advisors in favor of a resumption of diplomacy, but also cautioning against any repeat of the empty pageantry of the Trump-Kim summitry.

“I do not see a near-term urgency to re-engage with the North Koreans,” says Brookings’ Pollack. “It doesn’t mean you shun them but we have much more immediate priorities, beginning with allies but extending to China.”

North Korea could prove to be an early indicator of relations between China and the new American administration. “To the degree that China is intent on demonstrating its goodwill, North Korea becomes a very interesting test case,” says Pollack, a China scholar and an expert on China-North Korea ties. “If they are not cooperative, then that will be an interesting indication of what China’s expectations are going into the new administration.”

All of this will be on Kim Jong Un’s mind as the new year opens. “Kim needs to show big leadership with this party congress,” says former intelligence analyst Brown. But, as the 10th year of his rule begins, Kim’s future, and that of North Korea, may never have been more uncertain.