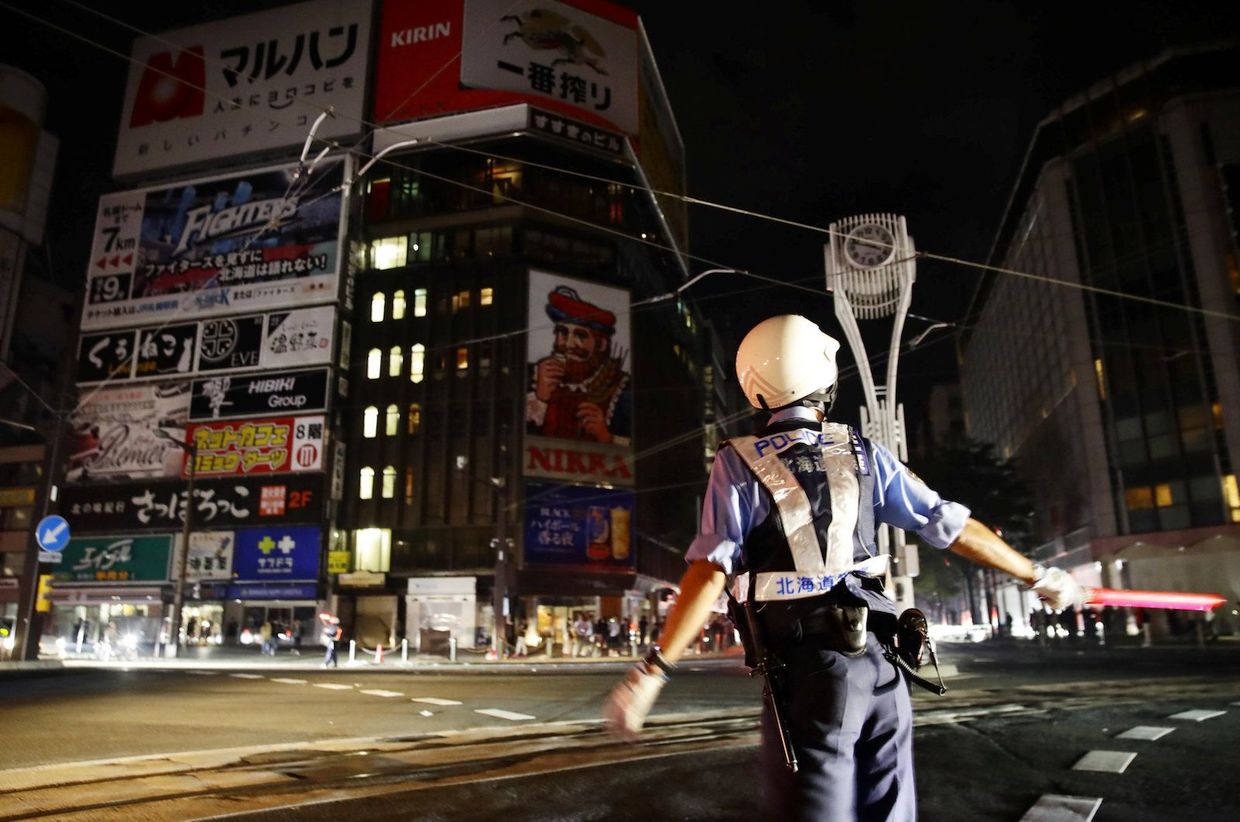 TOKYO (Reuters) - A powerful earthquake of magnitude 6.7 on Japan's northern island of Hokkaido caused a landslide that engulfed houses early on Thursday, injuring and trapping a number of people and cutting power in several areas.

A landslide along a long ridge in the rural town of Atsumi could be seen in aerial footage from public broadcaster NHK. Some 10 people had been taken to hospital with injuries, one of them serious, it said.

There were widespread power outages and blocked roads, NHK said, but no early reports of deaths. A man suffered cardiac arrest after falling down the stairs, local media reported.

Prime Minister Shinzo Abe, arriving at his office before 6 a.m., told reporters his government had set up a command centre to coordinate relief and rescue. His voice sounding haggard, Abe said saving lives was his government's top priority.

The Tomari Nuclear Power Station suffered a power outage but was cooling its fuel rods safely with emergency power, said Chief Cabinet Secretary Yoshihide Suga. Operator Hokkaido Electric Power Co <9509.T> reported no radiation irregularities at the plant, which has been shut since shortly after a massive 2011 earthquake, Suga told a news conference.

A fire broke out at a Mitsubishi Steel Mfg Co <5632.T> plant in the city of Nemuro but has largely been brought under control, NHK said, quoting local officials.

A series of smaller shocks, including one with a magnitude of 5.4, followed the initial temblor, the Meteorological Agency said. Agency official Toshiyuki Matsumori, at a early morning news conference, warned residents to take precautions for potential major aftershocks in coming days.

Shinkansen bullet trains were halted in some areas of Hokkaido, NHK said.

NHK Footage showed a crumbled brick wall and broken glass in a home, and quoted local police as saying some people were trapped in collapsed structures.

Soldiers were shown looking for damage on a rural road that was blocked by fallen trees.

Japan, situated on the "Ring of Fire" arc of volcanoes and oceanic trenches that partly encircles the Pacific Basin, accounts for about 20 percent of the world's earthquakes of magnitude 6 or greater.

On March 11, 2011, a 9.0 magnitude earthquake, the most powerful ever recorded in Japan, struck under the ocean off the coast of the northern city of Sendai. The quake set off a series of massive tsunami that devastated a wide swathe of the Pacific coastline and killed nearly 20,000.

The tsunami also damaged the Fukushima Daiichi Nuclear Power Plant, leading to a series of explosions and meltdowns in the world's worst nuclear disaster for 25 years.

Saturday marked the 95th anniversary of the Great Kanto earthquake, which had a magnitude of 7.9 and killed more than 140,000 people in the Tokyo area. Seismologists have said another such quake could strike the city at any time.

How Have Japanese Business Leaders Responded to the Panama Papers?