As The Olympic Games Open, War Talk in Washington 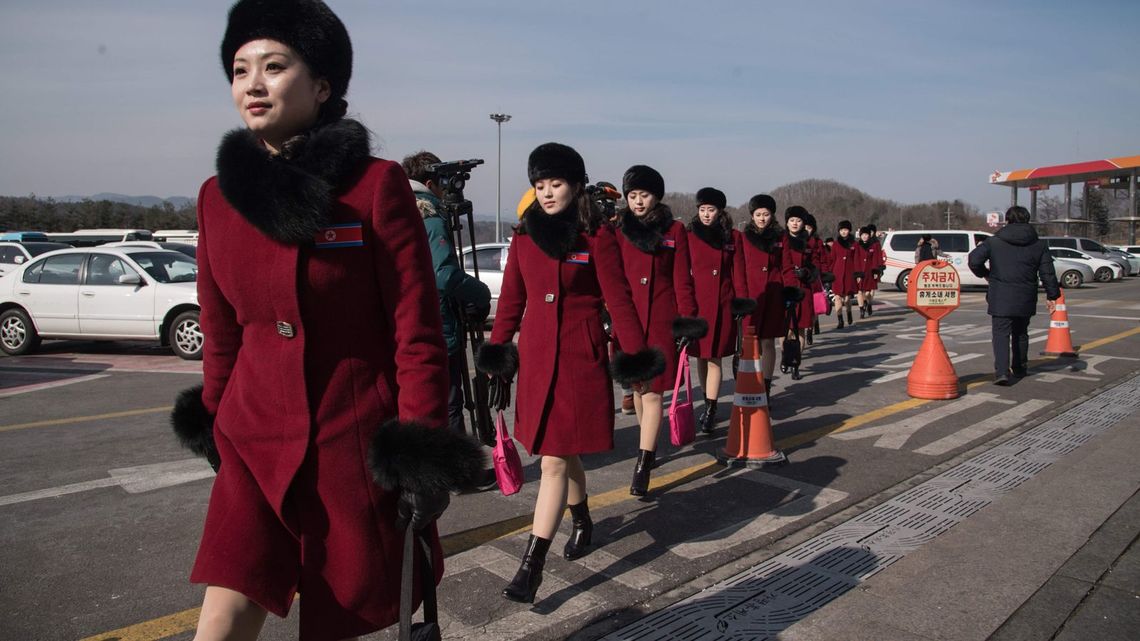 As the Winter Olympic Games open in the freezing temperatures of PyeongChang, South Korea, the frozen politics of the Korean peninsula will be on display as well.

South Korean leader Moon Jae-in finds himself playing host to a high-powered North Korean delegation including Kim Yo Jong, the younger sister of dictator Kim Jong Un. On the other side will be United States Vice President Mike Pence, standing arm in arm with Japanese Prime Minister Abe Shinzo.

North Korea’s Kim is the tip of a massive delegation, a handful of athletes wrapped in a small army of performers and officials, all designed to carry out a propaganda barrage, targeted mostly at South Koreans but also with a global audience in mind.

Pence has arrived with the stated goal of leading a counter-propaganda campaign, aimed to “make sure that North Korea doesn’t use the powerful symbolism and backdrop of the Winter Olympics to paper over the truth about their regime.” He is accompanied by Fred Warmbier, the grieving father of the American student who was imprisoned in North Korea for 17 months and returned to the U.S. last year in a coma, dying within days of his return.

The President launched this campaign with a long discussion of North Korea’s horrendous human rights record at his State of the Union speech, followed by an Oval Office meeting with North Korean defectors.

Prime Minister Abe, who met with Pence this week on his way to Korea, is joined at the hip in this attempt to undermine Pyongyang’s charm offensive at the Games. Both men share an open skepticism towards Moon’s desire to engage the North and a fear that the South Korean progressive regime is too ready to ease the economic sanctions which they believe are finally putting the regime under real pressure.

President Moon will do his best to keep a smile on his face and preserve the truce that has been secured for at least the duration of the Games. But these tensions are sure to surface in some form.

The task of easing tensions was made more difficult in recent days by the resurgence of war talk from Washington, DC. The anti-North Korean human rights campaign helped to fuel that talk, viewed by some as part of a concerted plan to create the atmosphere for war, akin to the defamation of Iraq and Saddam Hussein that preceded the Iraq war.

The New York Times reported earlier this week that the senior military leadership at the Joint Chiefs of Staff, along with Defense Secretary Jim Mattis, a retired Marine general, had deliberately resisted requests from the White House for military options, fearing that it will feed the belief that a military option is viable.

The war talk gained important currency in Washington with the report that the Trump administration’s nominee for U.S. Ambassador to South Korea, Victor Cha, a prominent academic expert and former Bush national security official, had been dropped suddenly after many months of preparation for appointment.

The White House insists that Cha was dropped for personal reasons, related to conflicts of interest from his wife’s family in Korea. Cha implied a much more dramatic explanation in the form of an opinion article in the Washington Post which carefully but forcefully rejected the idea of carrying out a limited, preventive military strike, what some have called giving them a “bloody nose.”

Cha took aim at the belief that a military strike would have a shock effect and would not trigger an escalatory response. The risks do not justify such hopes, Cha wrote. “If we believe that Kim (Jong-Un) is undeterrable without such a strike, how can we also believe that a strike will deter him from responding in kind? And if Kim is unpredictable, impulsive and bordering on irrational, how can we control the escalation ladder, which is premised on an adversary’s rational understanding of signals and deterrence?” he wrote.

Whether this was the reason for Cha’s appointment being pulled back is not clear. Some in Washington have jumped to assert that Cha’s reversal is evidence of an imminent strike against North Korea. I am not privy to government secrets, but my informed belief is that it is not the case.

Senior American State Department officials continue to express their belief in possibility of a diplomatic solution and to support the South Korean attempt to open a dialogue with the North. They tell South Korean officials that military options are simply part of the pressure campaign. Even Pence, echoing Secretary of State Rex Tillerson, left the door open to talking with the North Koreans at the Games. The chance of that remains very small but senior officials told the Moon administration they do not oppose their talks with Pyongyang, though not at the expense of weakening sanctions pressure or undermining the security alliance.

In the last week I also had the opportunity to have extensive contacts with senior U.S. military officials, representing our commands in Korea, Japan and the Pacific command in Hawaii, as well as visiting the 7th Fleet headquarters in Yokosuka. On the surface, at least, there is no evidence of a high state of alert, or even heightened readiness.

The nuclear-powered carrier Ronald Reagan, the most powerful warship in the fleet, is sitting at port in Yokosuka, undergoing maintenance repairs. Our senior commanders in Korea exude calm and confidence in the alliance, ready to resume the joint exercises postponed for the duration of the Olympic Games.

There is no indication, as yet, of preparations for so-called NEOs – Non-combatant Evacuation Operations – the evacuation of military dependents, U.S. officials and their dependents, and non-governmental civilians that many believe must precede any military operation in Korea.

Still there are specific options that have been examined for a preventive-style surgical strike that are more realistic than is widely believed. One such scenario, that is part of current planning, goes like this: if the United States sees preparation for a long-range missile test, which involves mounting the missile on a launch pad at one of North Korea’s two main missile launch sites, it will warn the North Koreans not to carry out the launch, arguing it is a violation of United Nations Security Council resolutions.

If they refuse to take the missile down, as is likely, the U.S. would destroy the missile in a precision strike with minimum casualties, and then issue a statement to make clear it is a limited strike, designed to enforce UN resolutions, and not aimed at broader regime attack. In this scenario, it is considered possible that the North Koreans will not respond immediately, out of shock and fear of a wider conflict.

Precisely this option was presented and argued for in a joint opinion article on June 22, 2006 in the Washington Post, during the Bush administration, by two prominent Democrat security experts – former Defense Secretary William Perry and then Harvard professor and future Obama Defense Secretary Ashton Carter. It is worth recalling what they said then:

“Should the United States allow a country openly hostile to it and armed with nuclear weapons to perfect an intercontinental ballistic missile capable of delivering nuclear weapons to U.S. soil? We believe not… Therefore, if North Korea persists in its launch preparations, the United States should immediately make clear its intention to strike and destroy the North Korean Taepodong missile before it can be launched. This could be accomplished, for example, by a cruise missile launched from a submarine carrying a high-explosive warhead. “

The two men even argued that even though the South Korean government would surely not support a U.S. ultimatum, the U.S. should carry it out anyway.

The U.S. “should sharply warn North Korea against further escalation.” They believed that even if the North Koreans threaten war, “it is unlikely to act on that threat” for fear of provoking the end of the regime. Diplomacy, Perry and Carter argued then, cannot prevent the North Korean race to delivery capacity. And a successful ICBM launch, would “only embolden North Korea even further.” In short, they said, there was no other choice.

Today Bill Perry believes that the North Korean development of nuclear weapons and missile capability makes this option no longer viable. But it is precisely the option now under active consideration in the Trump administration.

Military planners privately acknowledge, and have told the White House, I am assured, that there is no way to carry out such a strike without carrying a significant risk of North Korean escalatory response. But it is far from clear if those warnings have been considered seriously, or accepted, by the President and his closest advisors.

If such an option remains open, it is not likely until much later in the year. And it would probably not take place without some clear indications of preparations for a wider war, including a NEO and the movement of additional forces into the region. That, however, would remove any element of surprise and trigger open opposition from the Moon administration.

So, for now, the Olympic Truce will likely remain intact. Television viewers from Tokyo to Toronto can sit back and enjoy the athletic spectacles, even the propaganda wars carried out on the ice rinks and the stages, without too much worry. But as the snows melt in Korea, the freeze will be over on many fronts and we will see what emerges from under the icy ground.