Gotoku-ji and the Story of the Maneki Neko 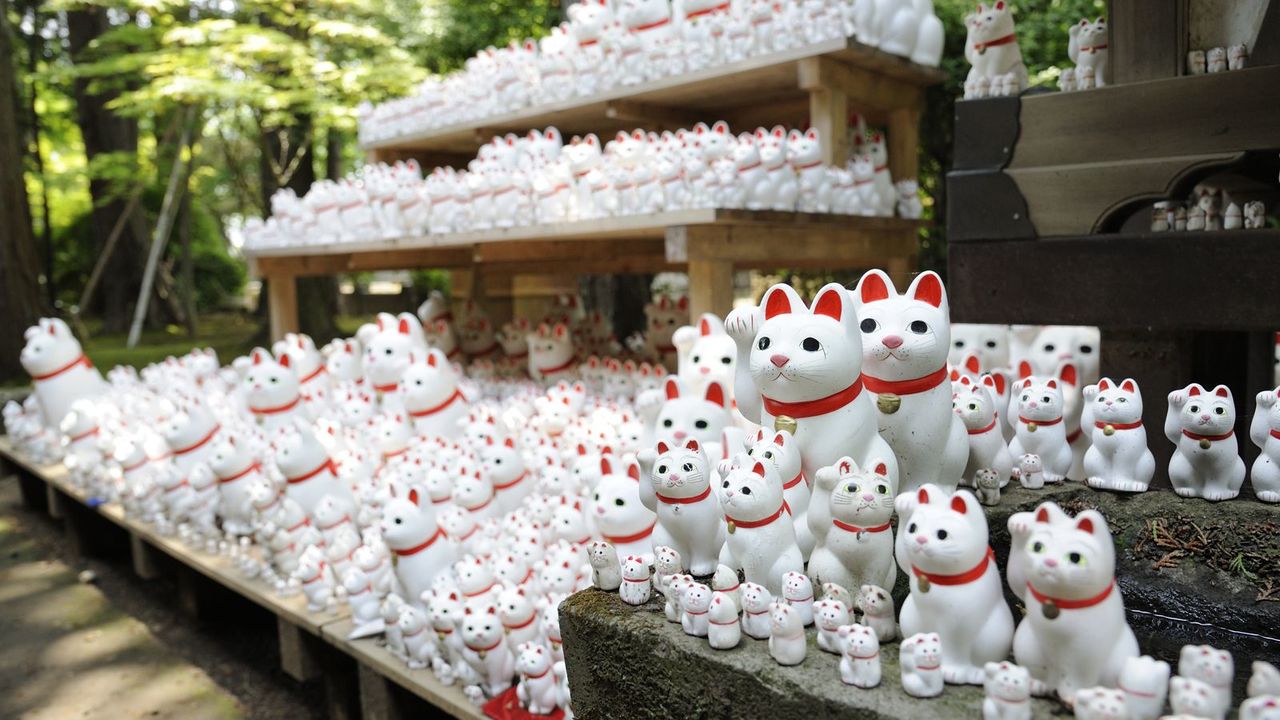 Whether in a restaurant or a souvenir shop, you’re bound to see at least a few statues of cats with a paw stretched up in the air while traveling in Japan. This little guy is known as the maneki neko-- literally the beckoning cat. Statues of this waving cat are thought to be charms for a safe home, success in business, and the granting of wishes. But where did this little cat get such a lofty reputation? 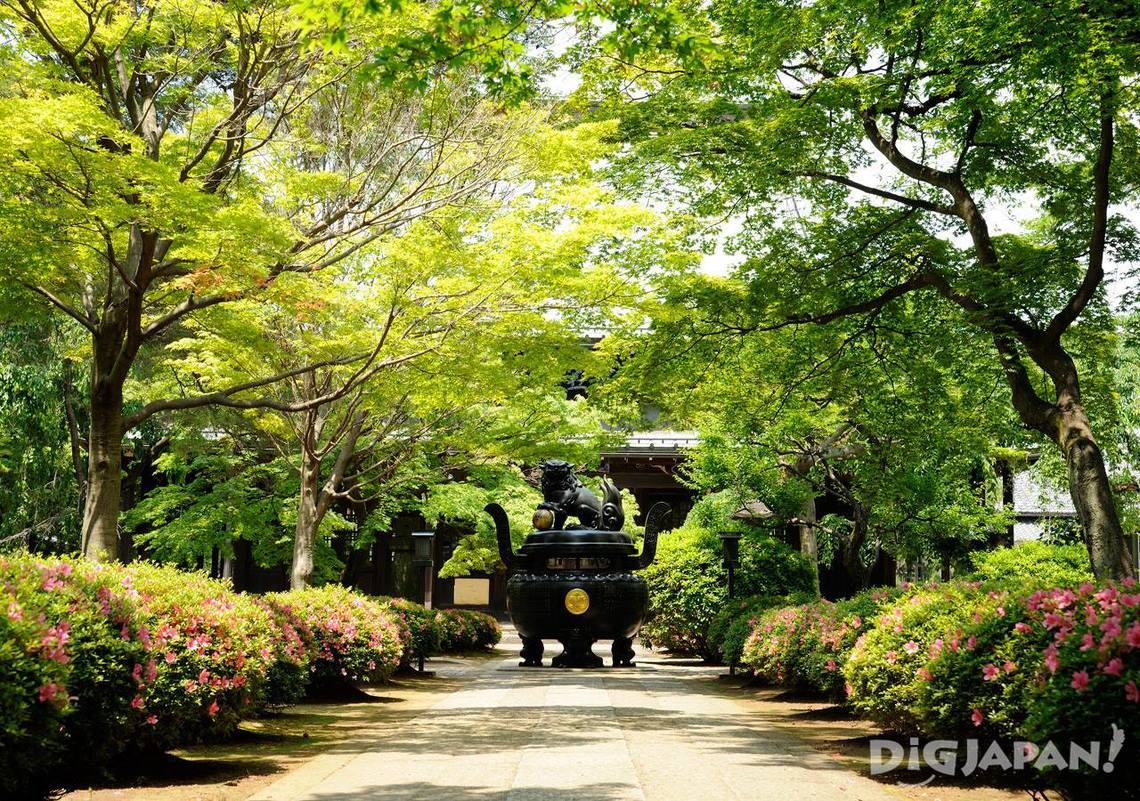 The inside of the shrine compound is lovely. In addition to the stone komainu (lion-dogs that guard Shinto shrines) and a giant incense burner, the temple bell which was built in 1679 is of particular note.

There is a legend that comes from the beginning of the Edo Period about a feudal lord from Hikone (now a city in present-day Shiga) named Ii Naotaka. While returning home from a visit to a falconry, Naotaka saw a cat sitting outside of a shrine across the road from him. This white cat waved its paw in the air at Naotaka as if beckoning him to come over. Curious, Naotaka approached the cat and followed it inside the temple. 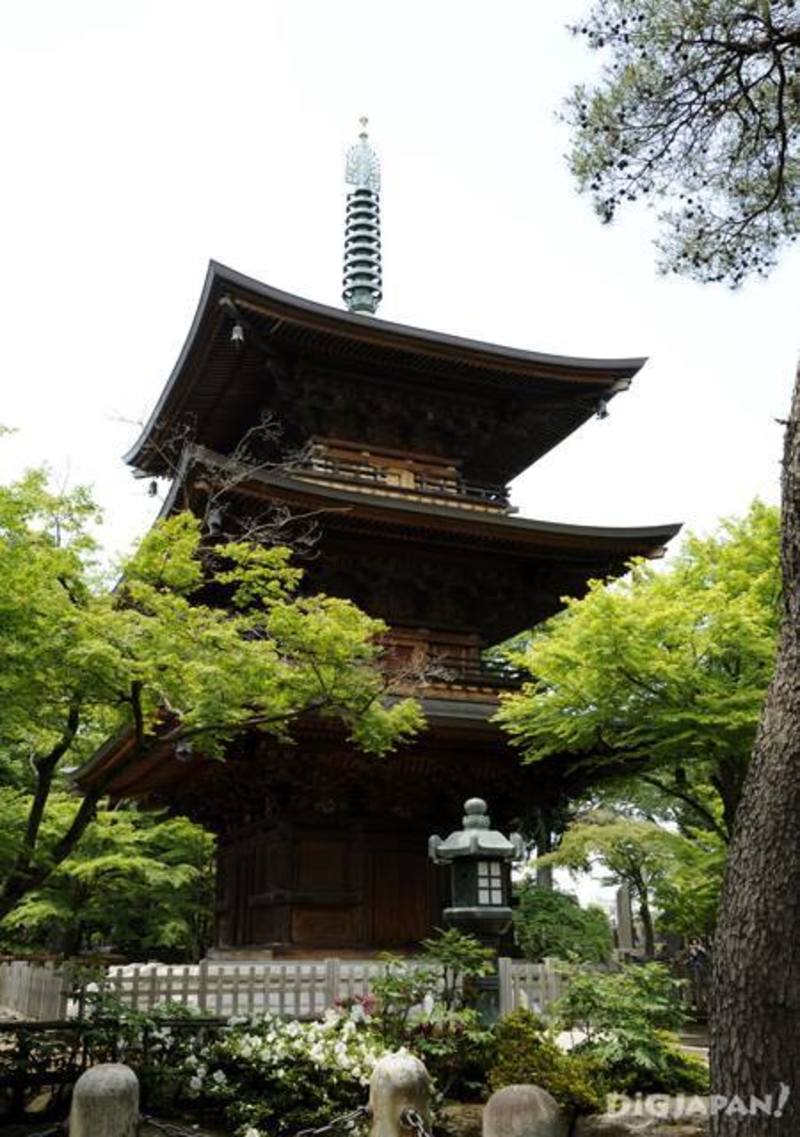 A three-tiered pagoda at Gotoku-ji Temple.

Just at that moment, the sky turned black and opened in a terrible thunderstorm. But Naotaka was safe and dry in the temple thanks to the cat. Out of gratitude, Naotaka arranged for the temple to be rebuilt in splendid fashion and designated it as his family temple.

It’s said that this is how Gotoku-ji Temple was founded. The little white cat who had invited good fortune to the temple was greatly revered, and statues-- the maneki neko-- started to be made in its likeness. Now these charms have become an easily recognizable symbol in the larger world. 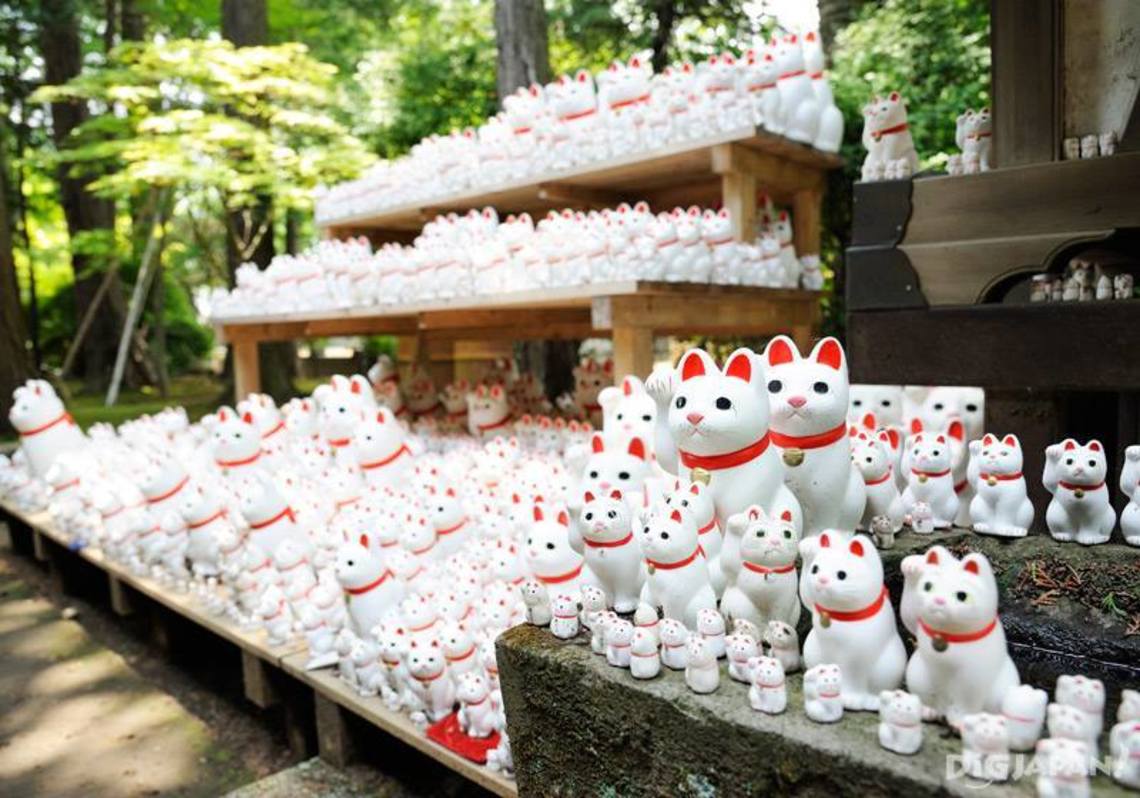 There are over 1,000 maneki neko inside of Gotoku-ji. 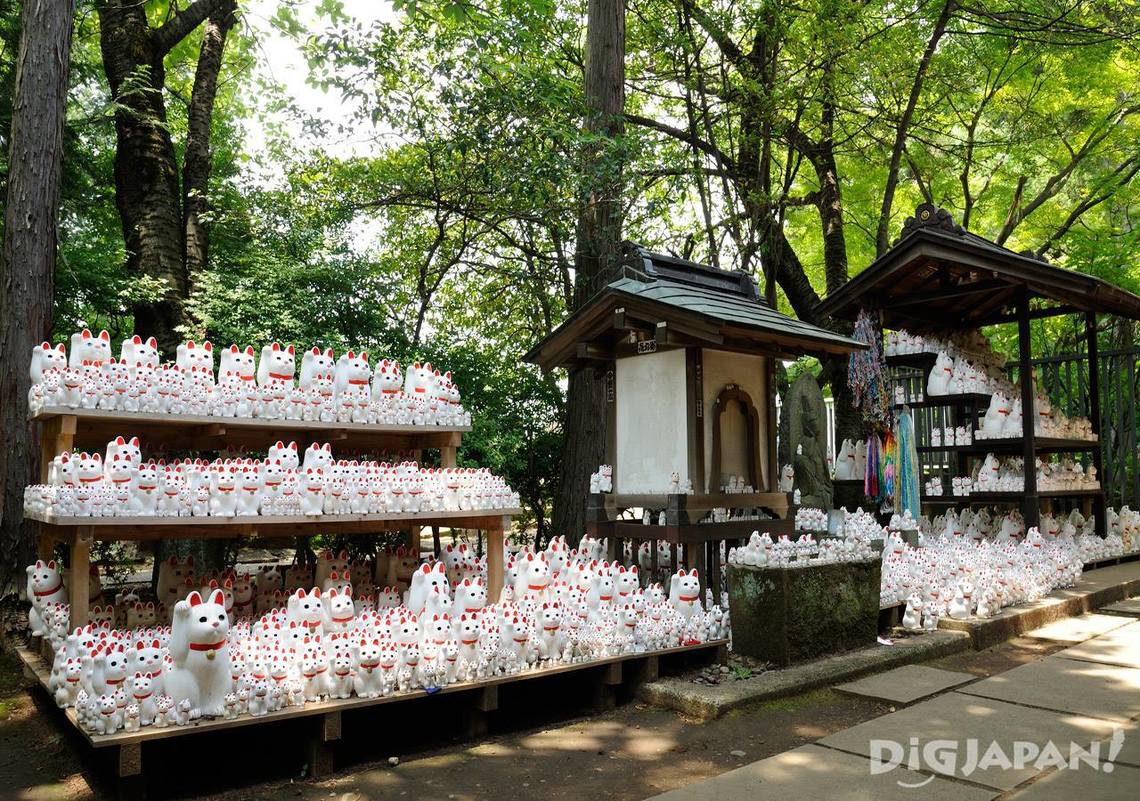 After helping their owners make their wishes come true, these cats get a well deserved rest.

The traditional beauty of Gotoku-ji combined with the sheer number of maneki neko statues inhabiting it make for some amusing contrast. If you’re looking for a picture that you can only take while in Japan, then this is a great spot!

Make a wish of your own! 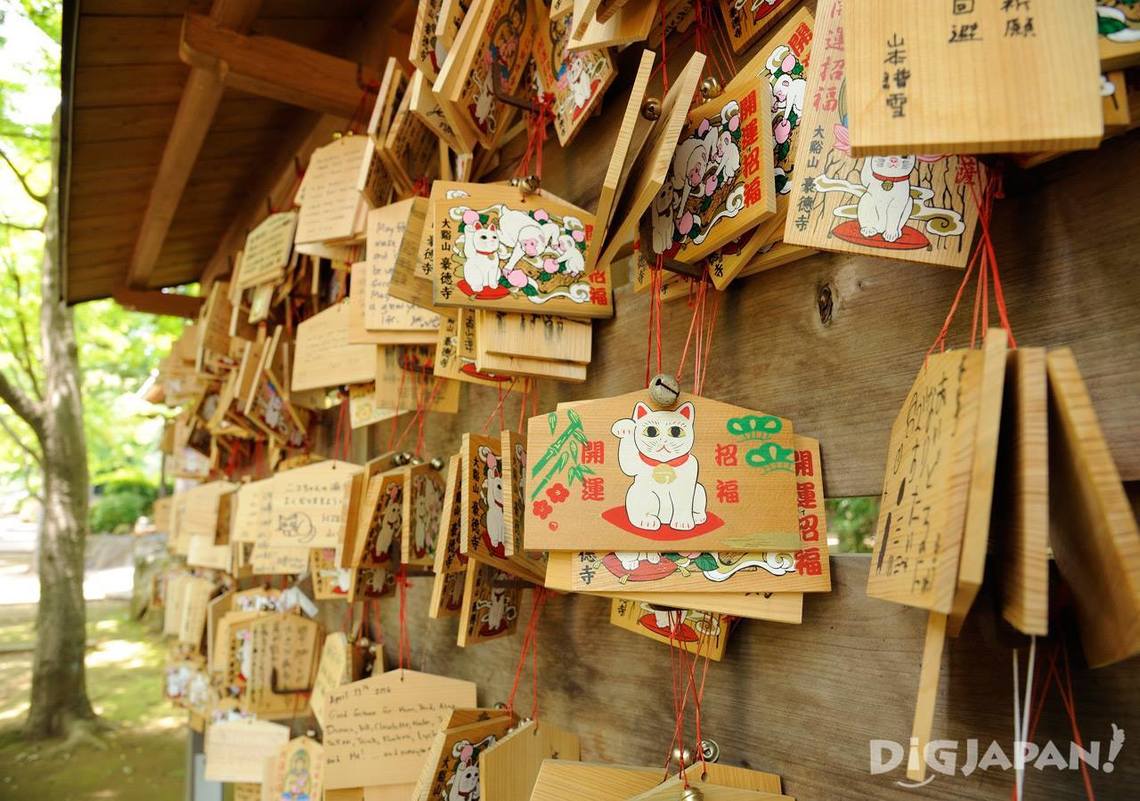 You can ask for a little help with making your dreams come true at Gotoku-ji by writing your wish on a wooden plaque called an ema and hanging it at the shrine. Naturally, Gotoku-ji’s ema have a picture of a cat on them. While you can write anything you’d like, you’ll find that many have wishes regarding the life and happiness of pet cats. (One ema costs 800 yen.) 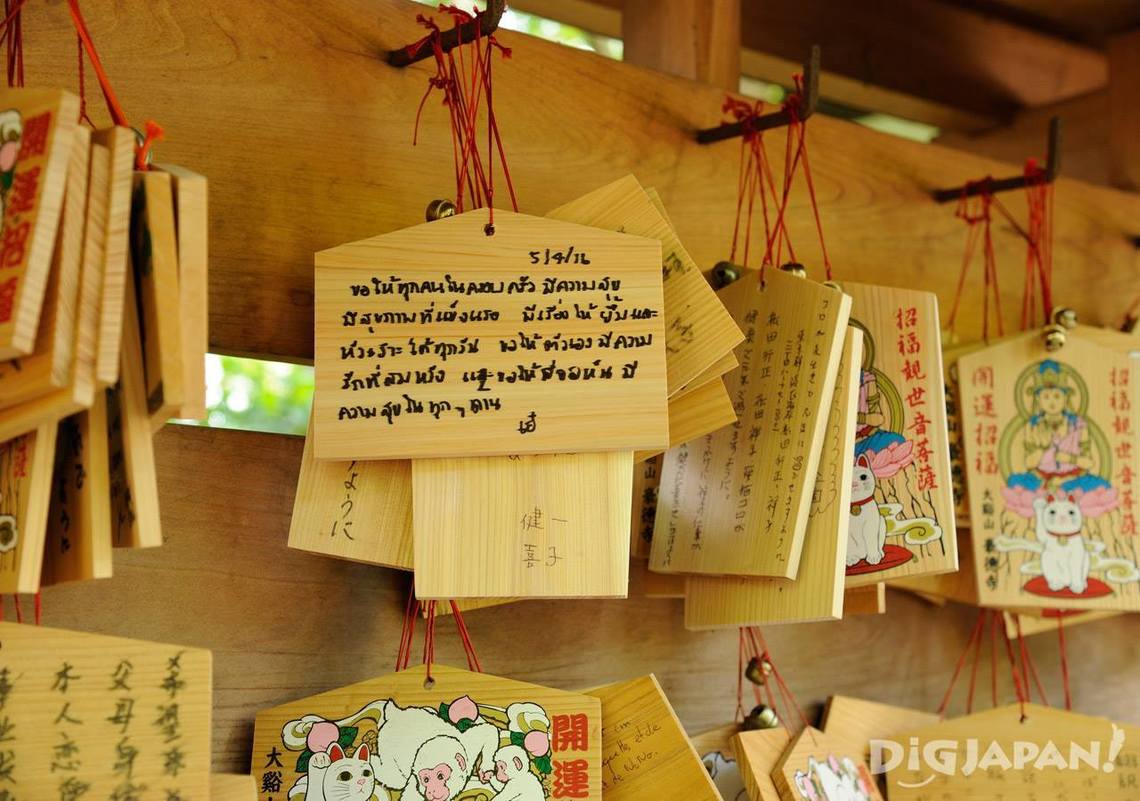 You can find ema written in a variety of languages at Gotoku-ji.

Don’t worry if you can’t write in Japanese. From Chinese to Thai, there are many ema written in foreign languages. 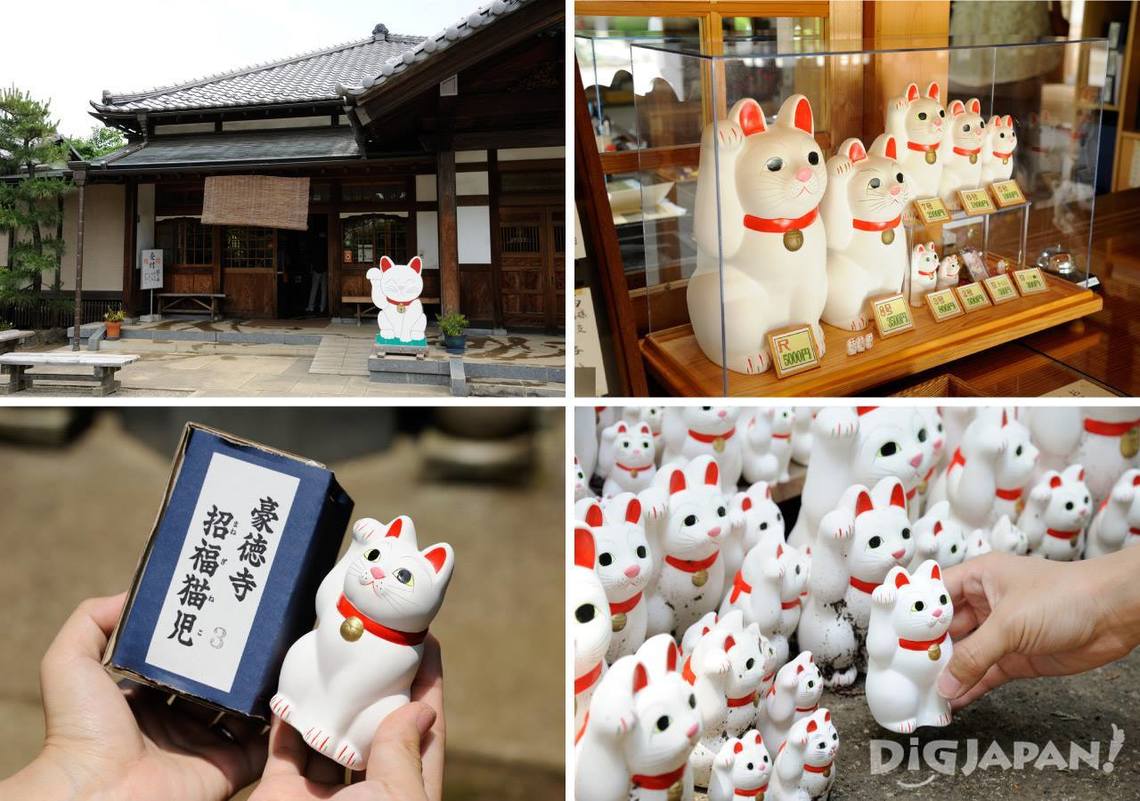 You can purchase a maneki neko of your own inside the temple office. From super mini statues to those nearly a foot tall, there's a size to fit your needs. You might have noticed that the statues at Gotoku-ji aren’t holding a golden coin like some other maneki neko do. This is because of the temple’s stance regarding what the maneki neko gives to its owner. Rather than actually bringing “luck” as symbolized by the gold coin, the maneki neko of Gotoku-ji brings the opportunity of luck; whether that luck manifests itself is up to the actions of the owner.

Maneki neko here, there and everywhere 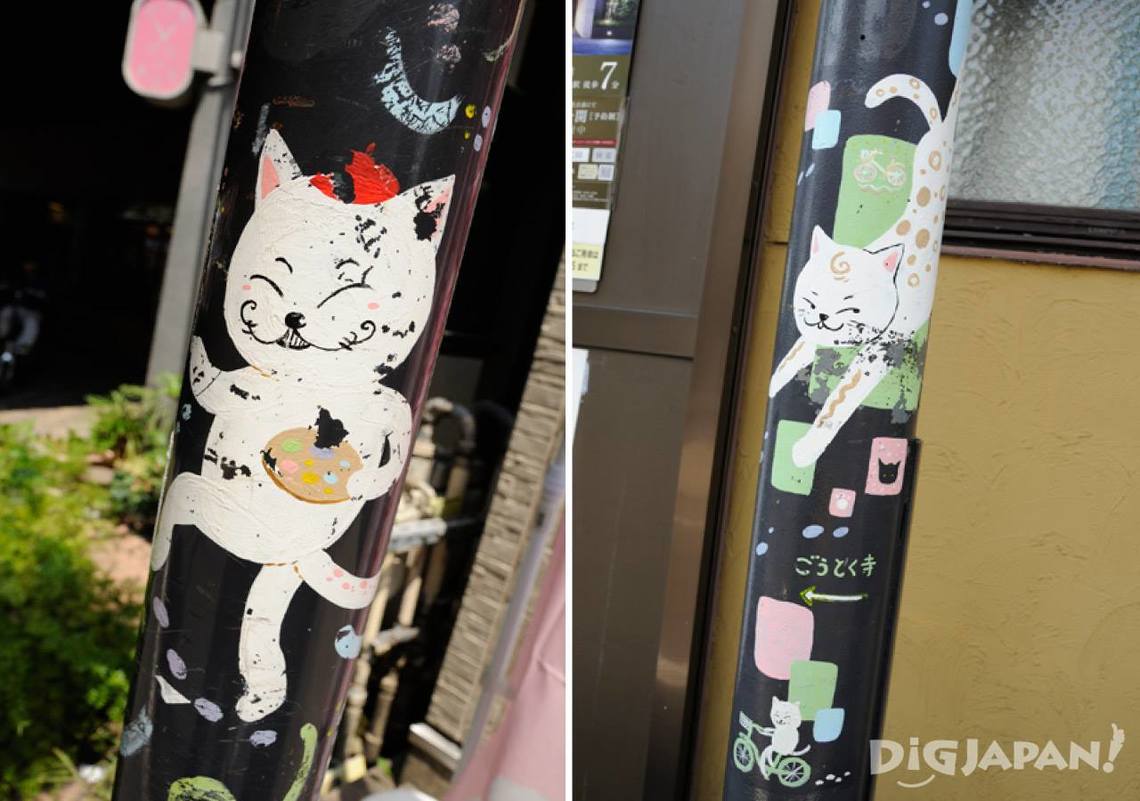 Cats decorate banners and telephone polls leading up to the temple.

It turns out the surrounding area is pretty fond of the maneki neko as well. From outside the turnstiles at of Gotoku-ji Station to the outdoor shopping arcade leading up to the temple, you'll find them virtually everywhere.

See what’s fun to do in Tokyo with DiGJAPAN!’s guide to this fascinating city