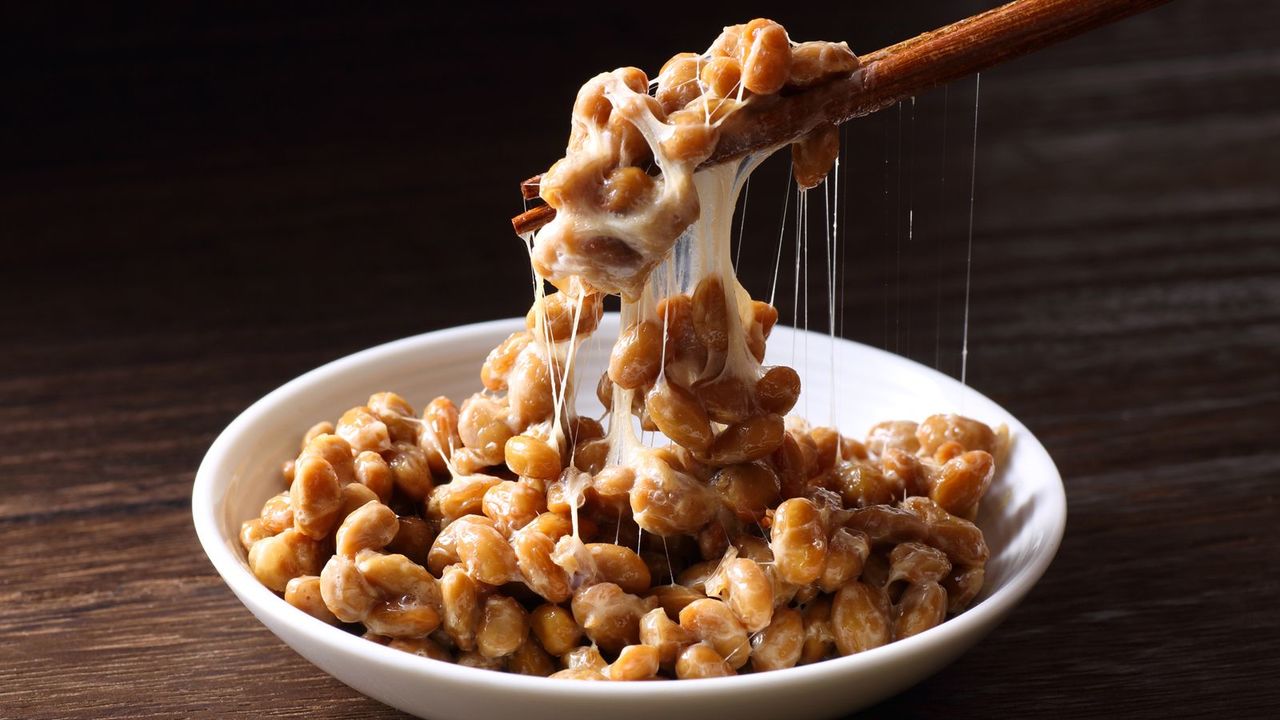 Natto, or fermented soybeans, are everywhere in Japan. (Photo by taa/PIXTA)

Natto, or fermented soybeans, are everywhere in Japan. There are natto burgers, natto bruschetta made with heaps of natto mixed with melted cheese or tomatoes on toasted bread, and even natto curries and sushi. But the most common way Japanese people eat natto is for breakfast over steamed rice with condiments, such as pickled fruits and vegetables. 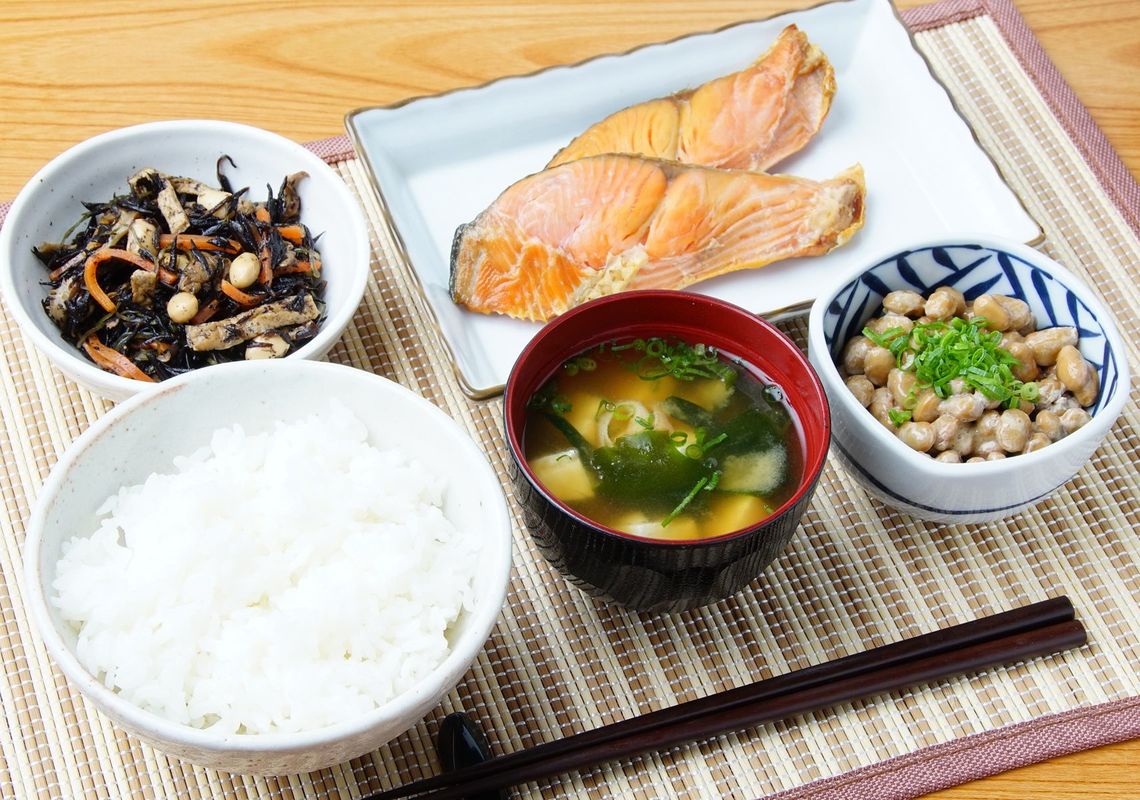 Sink your chopsticks into a heaping bowl of natto, lift and its renowned sticky strings appear. To many, this stickiness is an instant textural turnoff. To natto lovers like myself, the slime only serves to tantalize the palate with the rich, savory flavor to come. Some people think the flavor is reminiscent of a strong cheese, but for natto fans it is mouth-watering umami heaven.

Famous for its stickiness and strong flavor, natto is also highly nutritious. A one-cup serving has more than 80% of the U.S. recommended dietary allowance (RDA) of iron, and almost 40% of the RDA of calcium, vitamin C and dietary fiber. Natto is also packed with the enzyme nattokinase, which in scientific studies is a proven clot-buster and blood thinner and therefore contributes to heart heath. Laboratory analyses also suggest that nattokinase might also help protect against dementia and Alzheimer's disease, and have shown that it is a potentially powerful anti-cancer compound as well.

To me, one of the most interesting things about Japan's beloved, traditional natto is that there is nothing uniquely Japanese about it. Versions of soybeans fermented with the bacteria Bacillus subtilis can be found all over eastern Asia and into the Himalayas and southern Asia. Not only is natto closely related to Chinese shuidouchi and Korean cheonggukjang, but it is also related to Thai thua nao khaep, Indian piak, the pe-poke of Myanmar, and Nepalese and Himalayan kinema as well.

The likelihood that most of these other preparations are related to Japanese is very high, because the preparation methods between the various forms are virtually identical. In Japan, the traditional fermentation process is achieved by wrapping the cooked beans in straw that naturally carries Bacillus subtilis bacteria used to ferment the beans. From the mountainous regions of the Himalayas to northern Myanmar and Thailand, the beans are packed in ferns or other leaves that are available in the environment that also introduce the same bacteria into the dish.

Use of natto-like products also varies between the cultures and is roughly correlated with the level of technological achievement. In Japan, people enjoy more fresh or "raw" natto preparations that are warmed and eaten over rice, because the industrial supply chains of the fermented beans, and widespread refrigeration, allows this.

In Nepal and other areas without electricity and refrigeration, natto-like preparations are more often cooked into curries, soups or other dishes. Portions that cannot be eaten within a few days after fermenting are flattened into pancakes or balls and thoroughly dried before being added to other dishes as a flavoring.

Across western Africa, there are also similar preparations made with African locust seeds and bacillus species called sumbala or iru, or ogiri, which is made from fermented oil seeds such as sesame, or seeds from melons and gourds. It is unclear whether these fermented African seed preparations are related to the natto-like preparations of Asia (or whether they may be precursors of them), but in recent years, shortages of some seeds are forcing many Africans to use fermented soybeans to get that special mix of sour and savory that the fermented seed preparations traditionally have offered. Either way, that savory but sour flavor is sought after by many cuisines on at least two continents.

Expensive to buy, easy to make

Natto is a relatively recent arrival in Europe and North America, with most of the interest in it being fueled by its highly nutritive "superfood" status. However, it is still expensive and although it is available in some area Asian markets, it is still a high-end, mail-order product in most places.

The good news is that it is easy to make. If you can make your own yogurt or cheese, natto will be a cinch. All you need are soybeans and a starter culture. Starter cultures are available on the Internet, or you can even use commercially produced natto as a starter.

Just hydrate the soybeans until they swell to their full size -- usually overnight will do -- and cook them until they are soft, about three to four hours on the stovetop. Drain and, as they are cooling, mash them two or three times, and add the starter culture and mix well. Then let the temperature fall to around 100 degrees Fahrenheit, cover and let ferment for 24 to 36 hours. It is important to keep the temperature as stable as possible around at around 100 degrees F. Too cold or too hot, and the bacteria will stop growing and the ferment will not complete.

When the ferment is complete, the surface of the beans will be covered with a fine white to gray lace. It's best not to disturb the natto at this point, but just to refrigerate it for about 24 hours. Then take it out, stir a few times to get the strings started, warm and enjoy!

Brown Rice For Sushi? Your Body Will Thank You