By Masayuki Moriguchi : Railway Journalist
May 10,2016 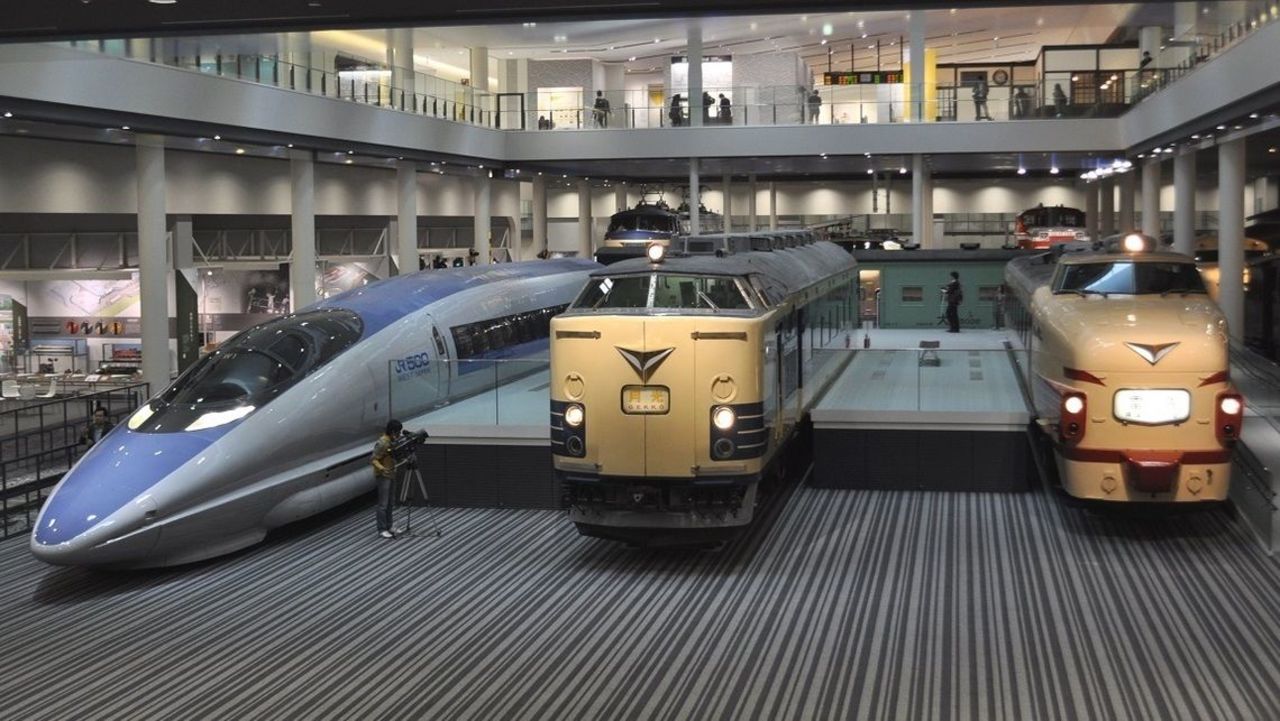 A grand welcome from the Shinkansen 500 Series

On April 29, Umekoji Park, an old public park in Kyoto, became a new pilgrimage destination for train fans from all over Japan – and beyond.

Kyoto Railway Museum which has opened in the old capital of Japan, is the largest museum of its kind in the country, accommodating 23,000 square meters of exhibition space – double the existing floor space at The Railway Museum in Saitama.

At this new facility, 53 real vehicles, which have carried countless amounts of cargo and generations of passengers, have been preserved. These range from early steam locomotives, commuter trains, and express trains to bullet trains (known across the world as Shinkansen).

Many of the exhibits have been inherited from two other institutions: the Modern Transportation Museum and Umekoji Steam Locomotive Museum, both of which have been closed, allowing their collections to be consolidated at this new museum.

The early steam locomotives on display have come from Umekoji Steam Locomotive Museum, which used to exist on the site of the new museum. These vehicles supported the old mass-transportation infrastructure of Japan during the early period of the country’s industrialization. The exhibits on show include fan-shaped car barns and a vast collection of vintage train cars.

Below is a brief summary of the main attractions at Kyoto’s new and exciting museum.

1） A grand welcome from the Shinkansen 500 Series

A 100-meter long promenade awaits you as you slip into the entrance hall, located alongside the elevated tracks of the Sanin Honsen (the main line). Standing under this roof, you will notice the magnificent floor space, which is designed to look like a series of station platforms. Here, you will find the C62 – the largest passenger steam train ever built in Japan – as well as the Tokaido Honsen 80 Series and the Tokaido Shinkansen 0 Series.

All these trains are regarded as having contributed greatly to the modernization of the Japanese railroad system. Train aficionados will be especially excited to see not only the lead vehicles, but also the well-preserved connecting passenger cars belonging to these models.

Those who have never travelled on long-distance trains with diner cars can actually get on board the Na-shi 20 Series dining car and order lunch, getting a feel for the luxurious dining experience that was once offered but no longer exists on any regularly operating express train. (At present, only certain sightseeing trains running on specific dates have a dining car.) 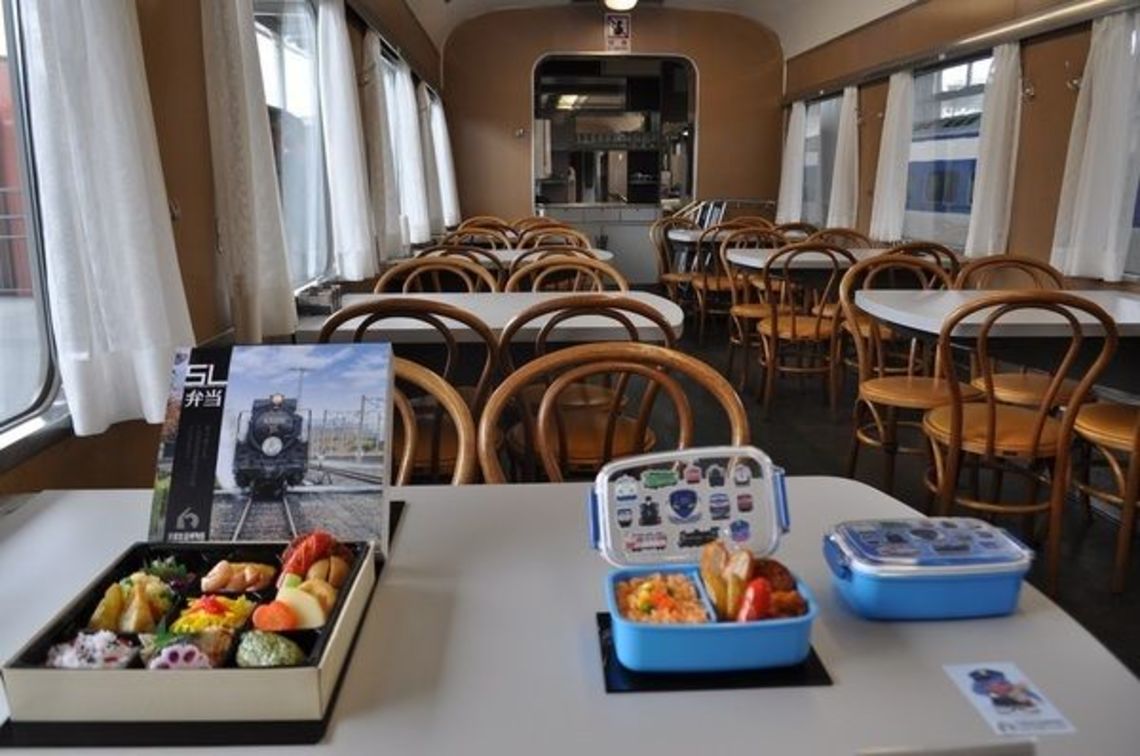 After being welcomed to the museum and seeing these amazing exhibits, visitors will be guided to the front entrance of the main building, where they will meet the bonnet-shaped front car belonging to the 489 Series, which formed part of the super-express train service that operated in the Hokuriku region.

Sleeper and passenger cars from the 581 Series super-express trains are also on display, as well as the signature Sanyo Shinkansen 500 Series bullet train. As none of these models have been put on display before, they have been specially chosen as exhibits to commemorate the grand opening of this new museum.

If you are a railroad geek and are particularly keen on the mechanical workings of Japanese trains, the EF66 and DD51 displays are unmissable. These trains are jacked up, allowing you to go underneath and get a rare view of the structure of the wheels and motor assembly units. This area also includes a variety of rails, pantograph mechanisms, and brakes, and you will be able to learn about how train safety is rigorously tested and maintained, learning about the complex interlocking systems.

2） The Steam-go and No.2 car barn passenger trains

Another must-see is the rich collection of steam locomotives. The fan-shaped train shed, inherited from Umekoji Steam Locomotive Museum, houses 20 of the 23 steam trains at the museum, including the antique 7100 Series (manufactured in 1880) and the D52, the largest domestic steam-powered freight train.

The most noteworthy of the remaining three steam locomotives is perhaps the 230 Series, exhibited near the entrance of the main building. Because it ran well and was easy to maintain, this small-sized steam locomotive became the first domestic steam train to be mass produced, in 1903. This March, the Japanese Government recognized its historical value and informally designated it a cultural asset of national importance. 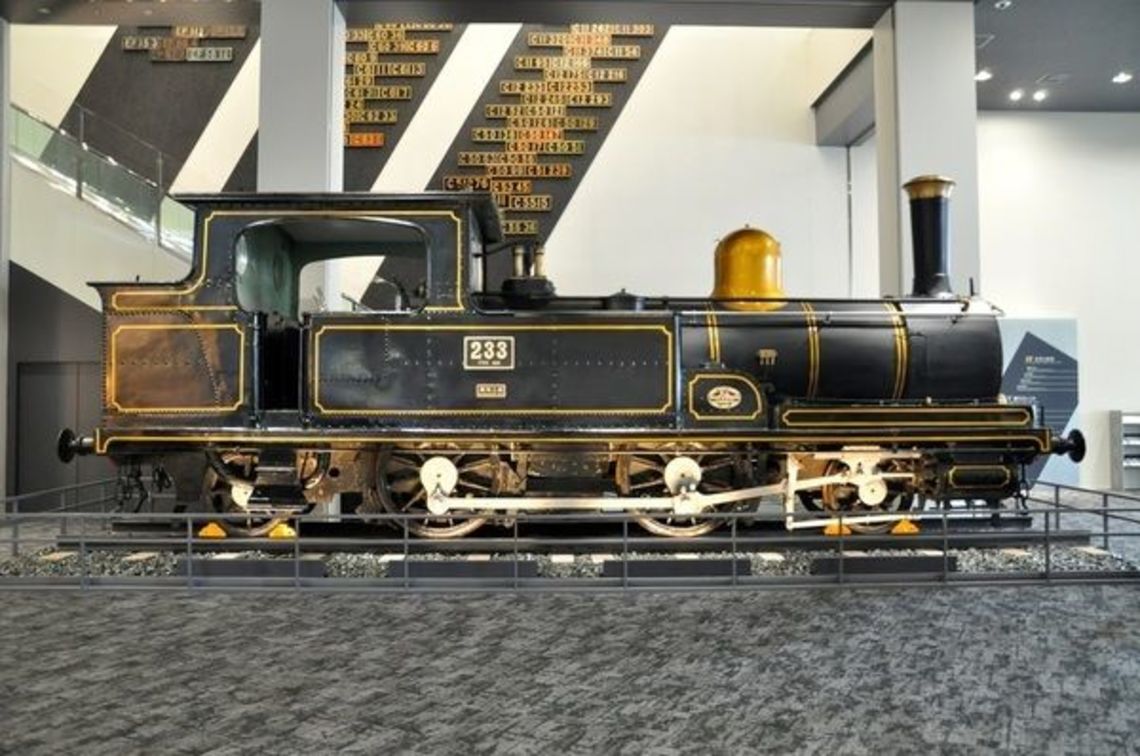 The Steam-go and No.2 car barn passenger trains

The Steam-go’s two 18-meter-long passenger cars have been newly manufactured to enhance the attractive features of this train. The exteriors have been designed in a retro style, but with a modern touch. The bodies are colored wine red, in remembrance of the juraku grape, which used to grow locally in Kyoto. Inside each carriage are emblems from retired super-express trains, used to evoke visitors’ memories of these vehicles.

Visitors can take a ride on this train by buying a 300-yen ($2.7) ticket at a booth near the platform. The highlight of this attraction, however, begins at 4pm, when Steam-go arrives at the platform and completes its last circuit of the day. The maintenance staff begin a routine that is just like the old days: refilling the feeder with coal, moving the train to the roundtable and rotating it, and transferring it to the car barn for a final inspection and service, so that it is ready for safe operation again the following day.

Museum visitors looking for the best spot to take photos should not forget the open passageway that gives access to the second floor of the main building, which provides a panoramic view of the car barn, Steam-go, and the active trains running on the Sanin, Tokaido, and Shinkansen lines.

The exhibition space on the second floor is also filled with intriguing items, including the popular steering simulator, which is actually used to teach real train operators. There are two types: one used by Shinkansen operators and the other for trains running on conventional railroad lines. Visitors have the chance to wear a motorman’s uniform and get a virtual experience of what it is like to steer a train like a professional. 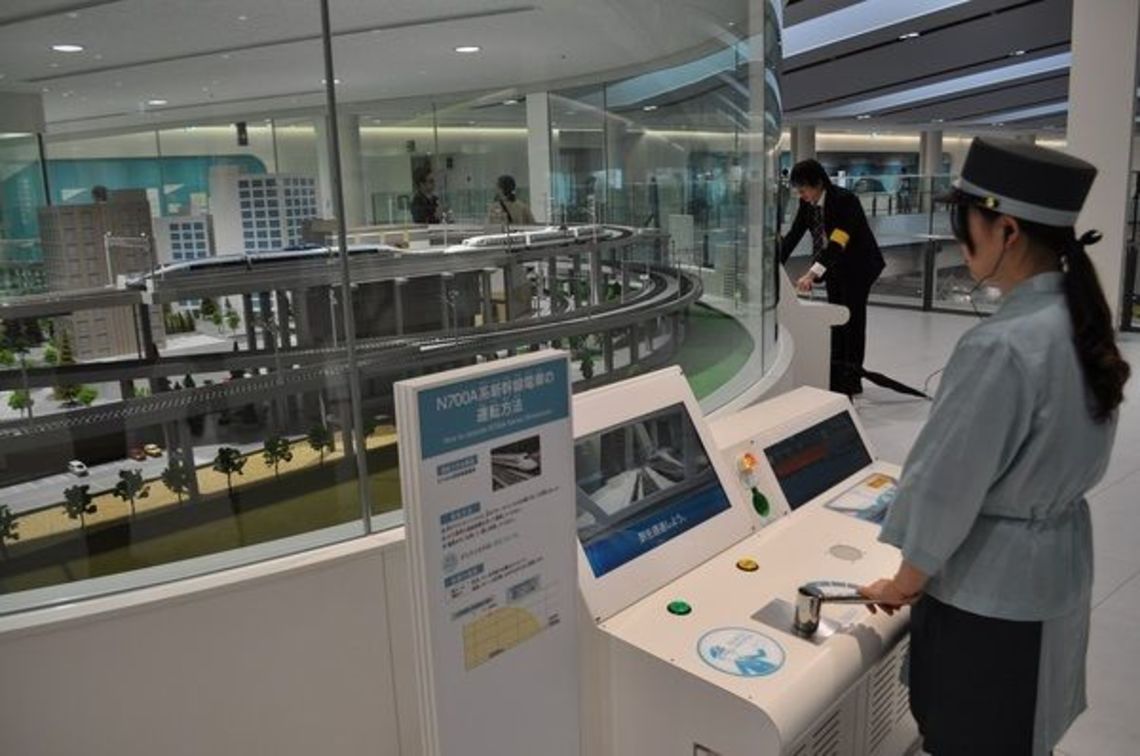 The exhibition of the automatic ticket checker, which you can see installed at almost every ticket gate at Japanese train stations today, is unexpectedly amusing. The only thing that differs from the real machines is that the top cover of this model is transparent, allowing visitors to see the machine’s inner workings. You take a train ticket from the on-site ticket vendor, feed the ticket into the checker, and watch how it is automatically verified by the machine in a matter of seconds. 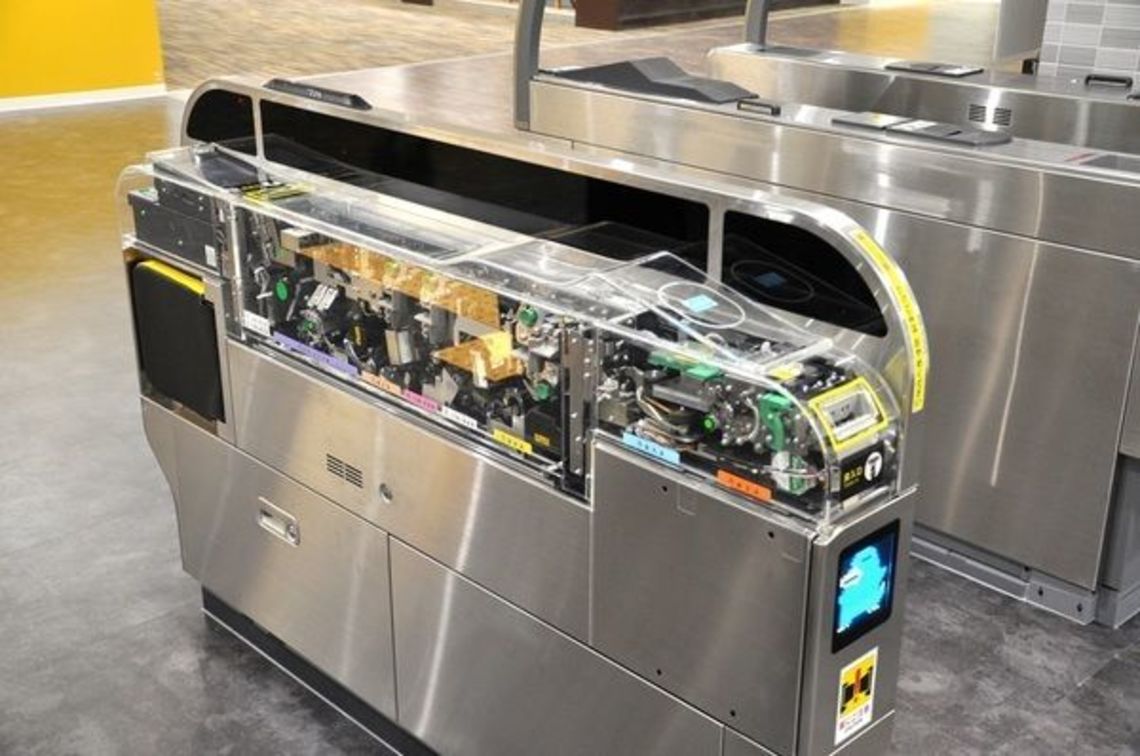 You might also be astonished by the 30-meter-wide georama of the railroad system and various landscapes, which have been shrunk to an eightieth of their original size. This railroad track measures one kilometer when laid out in a straight line. You’ll probably be so engrossed that you’ll forget the time as you gaze at these meticulously rendered train models moving around miniature Japanese towns and cities! 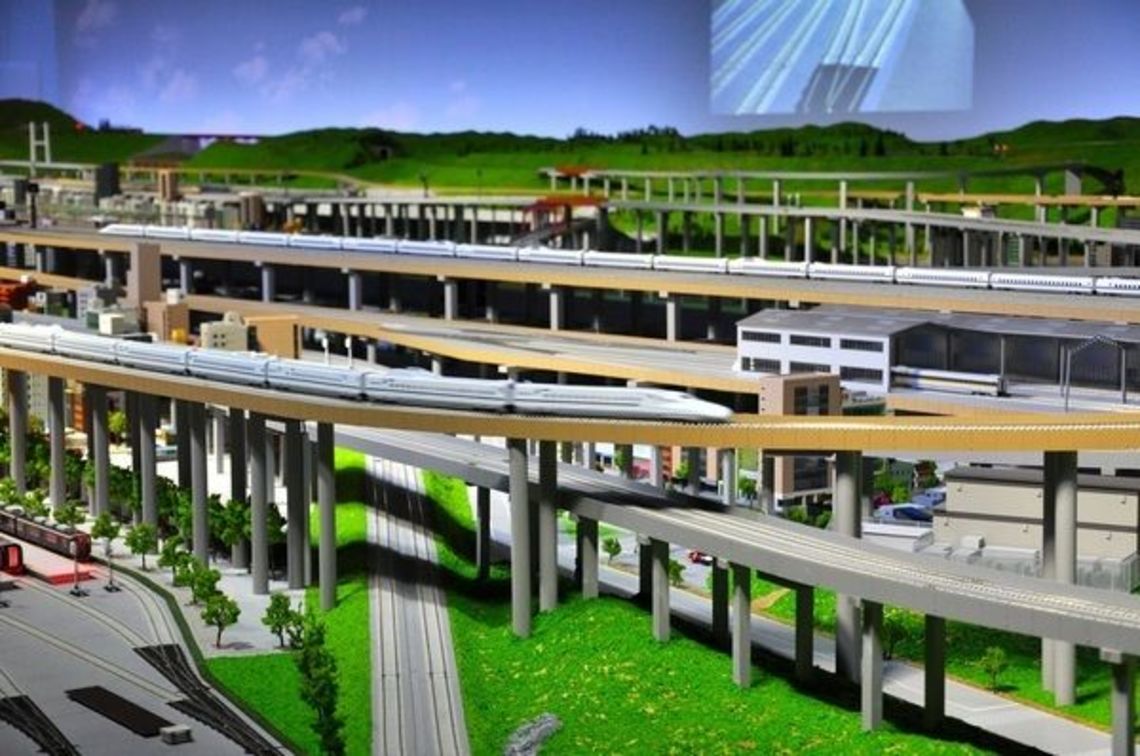 4） A museum that continues to improve

We have covered some of the museum’s key attractions in this article, but Kyoto Railway Museum offers all the above and more! In fact, the museum is striving to encourage visitors to return time and time again: “We want to attempt new things we have never tried before. We are aiming to improve this museum constantly through these new ideas,” says Hideyuki Miura, the museum’s curator.

The museum is already putting Miura’s vision into action, having several unprecedented events on its calendar. These include a wedding ceremony in early summer and a special exhibition of super-express trains and sleepers in the fall. There is also a plan to collaborate with the railway museums in Saitama and Nagoya in the future by exchanging a number of exhibits for a fixed term.

If there are any weak points to this museum, one would be accessibility. Visitors who want to come to this museum by train must use JR Kyoto Station and walk for around 20 minutes. There is a city bus route from Kyoto Station to the museum, but it is likely to be a very crowded service – especially during the museum’s first season.

Those who want to travel by car will have to find a parking lot somewhere in the vicinity, since the parking within Umekoji Park is very limited (it is available only for the physically disabled or families with babies and toddlers).

The good news, however, is that the museum is currently working together with Japan Railways and Kyoto City on an urban redevelopment project to improve access. This scheme will include the building of a walkway that will make the walk to Umekoji Park from Kyoto Station more enjoyable.

One of the recommended rest stops on this route is Shiden Hiroba: a plaza where a tramcar that was used as a key means of public transportation in the city of Kyoto half a century ago is exhibited. The tramcar is maintained in an operable state, allowing occasional demo runs. Here, there are also shops selling merchandise related to tramcars and serving refreshments.

Another way of accessing the museum by train would be to get off at Tanbaguchi Station on the Sanin Honsen. Those who opt for this route can enjoy views of the museum from the train, including the fan-shaped car barn.

During the 15-minute walk from the station to the museum, visitors can stroll through the historical district of Shimabara, which was a designated zone for courtesans during the Edo period. The old buildings and streets that remain in this neighborhood conjure memories of the days of the Shinsengumi special police force, which was formed in the mid-19th century to protect the Shogunate Government in Kyoto at the time.

Experience a Ride on the World's Fastest "Mobile Museum"

Did You Know About the "Good-Luck Left-Side Mt. Fuji" Seen from the Shinkansen?