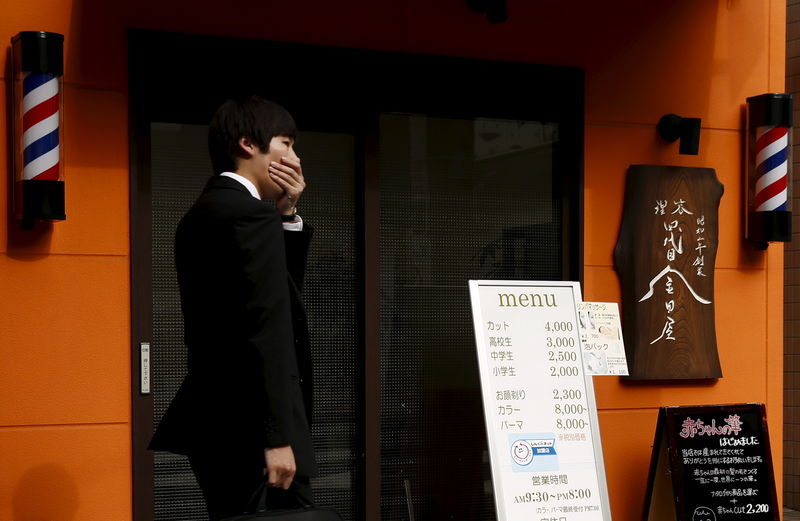 TOKYO (Reuters) - Desperately seeking an antidote to a rapidly ageing population, Japanese policymakers are exploring ways to bring in more foreign workers without calling it an "immigration policy".

Immigration is a touchy subject in a land where conservatives prize cultural homogeneity and politicians fear losing votes from workers worried about losing jobs.

Signalling the shift, a ruling Liberal Democratic Party (LDP) panel is likely to propose this week expanding the types of jobs open to foreign workers, who are expected to top 1 million this year.

"Domestically, there is a big allergy. As a politician, one must be aware of that," Takeshi Noda, an adviser to the LDP panel, told Reuters in an interview.

Unlike the United States, where Donald Trump has made immigration an election issue, Japan has little history of immigration. But, that makes ethnic and cultural diversity seem more of a threat in Japan than it may seem elsewhere.

And while Japan is not caught up in the mass migration crisis afflicting Europe, the controversies in other regions do color the way Japanese think about immigration.

LDP lawmakers floated immigration proposals almost a decade ago, but those came to naught. But, since then, labor shortages have worsened and demographic forecasts have become more dire.

By any other name

An economic uptick since Abe took office in December 2012, rebuilding after the 2011 tsunami and a construction boom ahead of the 2020 Tokyo Olympics have pushed labor demand to its highest in 24 years.

That has helped boost foreign worker numbers by 40% since 2013, with Chinese accounting for more than one-third followed by Vietnamese, Filipinos and Brazilians.

But visa conditions largely barring unskilled workers mean foreigners still make up only about 1.4% of the workforce, compared with the 5% or more found - according to IMF estimates - in most advanced economies.

So far, measures to attract more foreign workers have focused on easing entry for highly skilled professionals and expanding a "trainee" system that was designed to share technology with developing countries, but which critics say has become a backdoor source of cheap labor.

Now, however, the LDP panel looks set to go further by proposing foreigners be accepted in other sectors that face shortages, such as nursing and farming, while leaving open the possibility such workers can later seek permanent residence.

"We will tackle accepting foreigners as a labour force head-on," an LDP source close to the panel told Reuters.

Acknowledging the sensitivities - especially ahead of an upper house election in July - the source said the panel will specify it is not recommending an "immigration policy", defining immigrants as people who enter Japan with no fixed limit on length of stay.

"There is worry about the impact on public safety," Masahiko Shibayama, a panel member and special adviser to Abe, told Reuters. "There is concern domestic jobs will be eaten away. So I think there is still an allergy to the word 'immigration'."

"The government insists it is not adopting an immigration policy, but whatever the word, faced with a shrinking population, it is changing its former stance and has begun to move toward a real immigration policy," said Hidenori Sakanaka, a former Tokyo Immigration Bureau chief.

Two cabinet members have already advocated adopting an immigration policy, as have some LDP panel members.

"The fundamental problem of the Japanese economy is that the potential growth rate is low," LDP panel adviser Seiichiro Murakami told Reuters. "To raise that, big structural reforms including ... immigration policy are necessary."

The influential Nikkei Business weekly has dubbed a foreign worker-driven growth strategy "imin-omics", a pun on the premier's "Abenomics" revival plan and "imin", the Japanese word for "immigrants".

Abe, however, has made drawing more women and elderly into the work force while boosting the birth rate priorities, and publicly the government rules out any "immigration policy".

"We are seeking to mobilise the power of women and the elderly as much as possible, but at the same time we recognise that the acceptance of foreigners is a major issue," Suga told Reuters, adding caution was needed.

He said the future debate would also consider the longer term issue of permanent residence for less skilled foreigners.

For example, an ex-labor minister commenting at the LDP panel on a proposal to let in foreign beauticians said the idea was fine, as long as their customers were foreign, too.

Hairdresser Mitsuo Igarashi has four barber chairs in his downtown Tokyo salon, but only himself to clip and shave. He wants to hire other barbers, and doesn't care where they come from.

"We've got to let in more foreigners," said Igarashi.