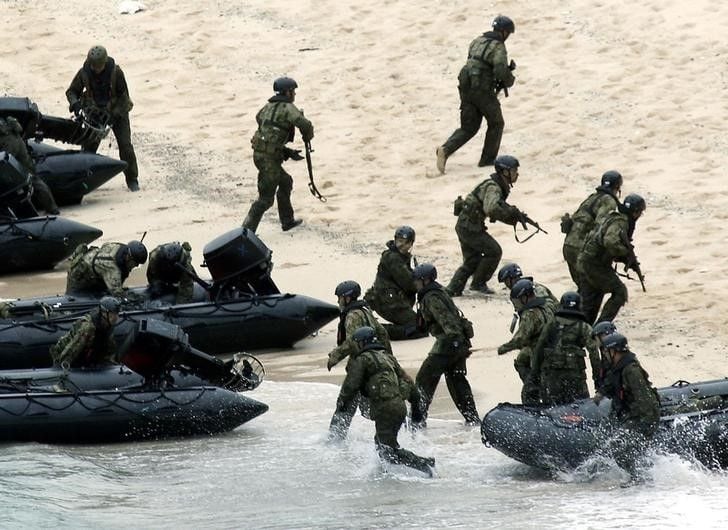 Japan Self-Defense Force (JSDF) soldiers land on Eniyabanare Island during a military drill, off Setouchi town on the southern Japanese island of Amami Oshima, Kagoshima prefecture, in this photo taken by Kyodo May 22, 2014. REUTERS/Kyodo/Files

TOKYO (Reuters) - Japan is fortifying its far-flung island chain in the East China Sea under an evolving strategy that aims to turn the tables on China's navy and keep it from ever dominating the Western Pacific Ocean, Japanese military and government sources said.

The United States, believing its Asian allies - and Japan in particular - must help contain growing Chinese military power, has pushed Japan to abandon its decades-old bare-bones home island defense in favor of exerting its military power in Asia.

Tokyo is responding by stringing a line of anti-ship, anti-aircraft missile batteries along 200 islands in the East China Sea stretching 1,400 km (870 miles) from the country's mainland towards Taiwan.

Interviews with a dozen military planners and government policymakers reveal that Prime Minister Shinzo Abe's broader goal to beef up the military has evolved to include a strategy to dominate the sea and air surrounding the remote islands.

While the installations are not secret, it is the first time such officials have spelled out that the deployment will help keep China at bay in the Western Pacific and amounts to a Japanese version of the "anti-access/area denial" doctrine, known as "A2/AD" in military jargon, that China is using to try to push the United States and its allies out of the region.

Chinese ships sailing from their eastern seaboard must pass through this seamless barrier of Japanese missile batteries to reach the Western Pacific, access to which is vital to Beijing both as a supply line to the rest of the world's oceans and for the projection of its naval power.

To be sure, there is nothing to stop Chinese warships from sailing through under international law, but they will have to do so in within the crosshairs of Japanese missiles, the officials told Reuters.

As Beijing asserts more control across the nearby South China Sea with almost completed island bases, the string of islands stretching through Japan's East China Sea territory and south through the Philippines may come to define a boundary between U.S. and Chinese spheres of influence. Military planners dub this the line the "first island chain".

"In the next five or six years the first island chain will be crucial in the military balance between China and the U.S.- Japan," said Satoshi Morimoto, a Takushoku University professor who was defense minister in 2012 and advises the current defense chief, Gen Nakatani.

A U.S. warship in late October challenged territorial limits that China is asserting around its new man-made island bases in the Spratly archipelago.

But Beijing may already have established "facts on the ground" in securing military control of the South China Sea, some officials and experts say.

"We may delay the inevitable, but that train left the station some time ago," a senior U.S. military source familiar with Asia told Reuters, on condition he was not identified because he was not authorized to talk to the media.

China's "ultimate objective is hegemony over the South China Sea, hegemony over the East China Sea", said Kevin Maher, who headed the U.S. State Department's Office of Japan Affairs for two years until 2011. "To try and appease the Chinese would just encourage the Chinese to be more provocative," said Maher, now a consultant at NMV Consulting in Washington.

The predecessor Democratic Party of Japan government pivoted away from protecting the northern island of Hokkaido against a Soviet invasion that never came to defending the southwest island chain.

"The growing influence of China and the relative decline of the U.S. was a factor," said Akihisa Nagashima, a DPJ lawmaker who as vice minister of defense helped craft that change. "We wanted to do what we could and help ensure the sustainability of the U.S. forward deployment."

China is investing in precision missiles as it seeks to deter the technologically superior U.S. Navy from plying waters or flying near Taiwan or in the South China Sea.

Beijing in September gave friends and potential foes a peek at that growing firepower in its biggest ever military parade, which commemorated Japan's World War Two defeat. Making its debut was the Dongfeng-21D, a still untested anti-ship ballistic missile that could potentially destroy a $5 billion U.S. aircraft carrier.

It joins an arsenal the U.S. Congress estimates at 1,200 short-range missiles and intermediate missiles that can strike anywhere along the first island chain. China is also developing submarine- and land-launched radar-evading cruise missiles.

"Rather than A2/AD, we use the phrase 'maritime supremacy and air superiority'," said Yosuke Isozaki, Abe's first security adviser until September and a key author of a national defense strategy published in 2013 that included this phrase for the first time.

"Our thinking was that we wanted to be able to ensure maritime supremacy and air superiority that fit with the U.S. military," he added.

Toshi Yoshihara, a U.S. Naval War College professor, said Tokyo could play an important role in limiting China's room for manoeuver through the East China Sea to the Western Pacific, enhancing U.S. freedom of movement and buying time for the alliance to respond in the event of war with China.

"You could say Japan is turning the tables on China," Yoshihara said.

Memories of Japanese aggression in World War Two still haunt Tokyo's relations with its near neighbors, and tensions have sharpened since the return to power of Abe, who critics view as a revisionist who wants to downplay Japan's wartime past.

"We urge the Japanese side to take history as a mirror, and take more actions in the interests of growing mutual trust."

"The U.S. planning process for any theatre takes into consideration the capabilities and forces of friends and potential adversaries," Aucoin told Reuters. "The U.S plans with the ultimate objective of maintaining peace and stability not only for Japan, but also for the region."

Over the next five years, Japan will increase its Self-Defense Forces on islands in the East China Sea by about a fifth to almost 10,000 personnel.

Those troops, manning missile batteries and radar stations, will be backed up by marine units on the mainland, stealthy submarines, F-35 warplanes, amphibious fighting vehicles, aircraft carriers as big as World War Two flat-tops and ultimately the U.S. Seventh Fleet headquartered at Yokosuka, south of Tokyo.

Already cooperating closely, the Japanese and U.S. navies will draw closer than ever after Abe's new security legislation legitimized collective self-defense, allowing Japan to come to the aid of allies under attack.

One crucial change, said Maher: the U.S. and Japanese military can now plan and practice for war together and deliver a "force multiplier".

In some areas, however, Japan's military is making do. Anti-ship missiles designed 30 years ago to destroy Soviet landing craft heading for Hokkaido are being deployed to draw the defensive curtain along the southwest island chain.

Able to lob a 225-kg (500-lb) warhead 180 km, they have enough range to cover the gaps between the islands along the chain, said Noboru Yamaguchi, a Sasakawa Peace Foundation adviser and former general who procured them three decades ago.

Japan's military planners must also figure out how to transform an army used to sticking close to its bases into a more mobile, expeditionary force.

Decades of under-investment in logistics means Japan has too few naval transport ships and military aircraft to carry large numbers of troops and equipment.

A more delicate task for Japan's government, however, may be persuading people living along the islands to accept a bigger military footprint. After decades hosting the biggest concentration of U.S. troops in Asia, people on Okinawa are voicing greater opposition to the bases.

For now, communities on the long chain of islands, home to 1.5 million people, that have been asked to host Japanese troops are happy to do so, said Ryota Takeda, a lawmaker who as vice defense minister until Sept. 2014 travelled there frequently to win residents' approval for new deployments.

"Unlike officials sitting in the Ministry of Defense in Tokyo they are more attuned to the threat they face every day."

(Reporting by By Tim Kelly and Nobuhiro Kubo, Additional reporting by Linda Sieg in Tokyo and Megha Rajagopalan in Beijing; Editing by Dean Yates, William Mallard and Alex Richardson)