French industrial engineers have created digital devices that could eventually be used as additional border police.

This robotic kiosk could soon help speed up your check-in at airports.French firm Thales says its device should help border police.

"The idea of Thales' solution is not to replace or to fire all the border control agents that are working on a daily basis inside the airport. What is important to understand is that such solutions will be a complement, will be in addition to the standard manual border crossings means that is offered to all the passengers."

The robotic kiosk contains an in-built camera and biometric passport scanner that provides a 'digital key' to identify passengers throughout the airport.

"This kiosk will be used to do three things: the first one is to make sure that you have a travel document that is a real one and a valid one. Secondly it will make a facial comparison between your face and the picture inside the passport to make sure that I am the holder of this passport, for example, and the third step at the kiosk will be to acquire my iris to be used later on at the immigration to pass the border."

An image of the passenger's face is made into an encrypted digital file and could be incorporated into a smartphone boarding pass.

After the recent Islamist militant attacks in Paris and Egypt, security has been heightened at airports globally.

"We've got more and more passengers coming through the borders every day right now, so we've got to find smarter ways of using the resources that we do have to process those larger volumes of passengers. So a device like the Thales device is really helpful in being able to automate a lot of those functions that could otherwise be performed by some of the staff at the border." 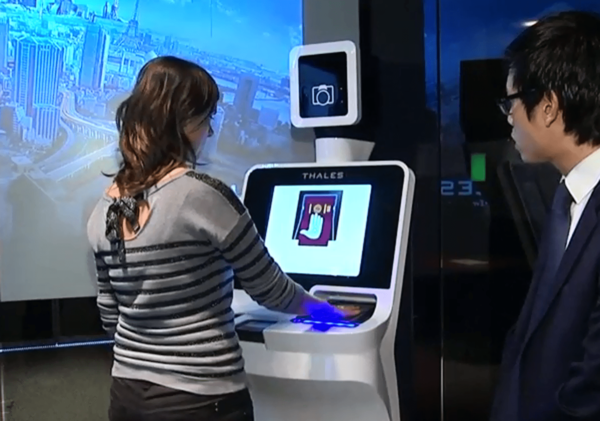 "What a machine and what automation can't do is perform an interview. So what they're good at is performing those repetitive functions, checking the validity of the document, the authenticity of the document, matching the document to the holder, to making sure that it does actually belong to the person presenting it. But it's not good at looking at behaviour indicators, asking questions, finding out a little bit more about the person who is presenting in front of the border."

Thales is in discussion with various airports to implement the system, possibly next year.