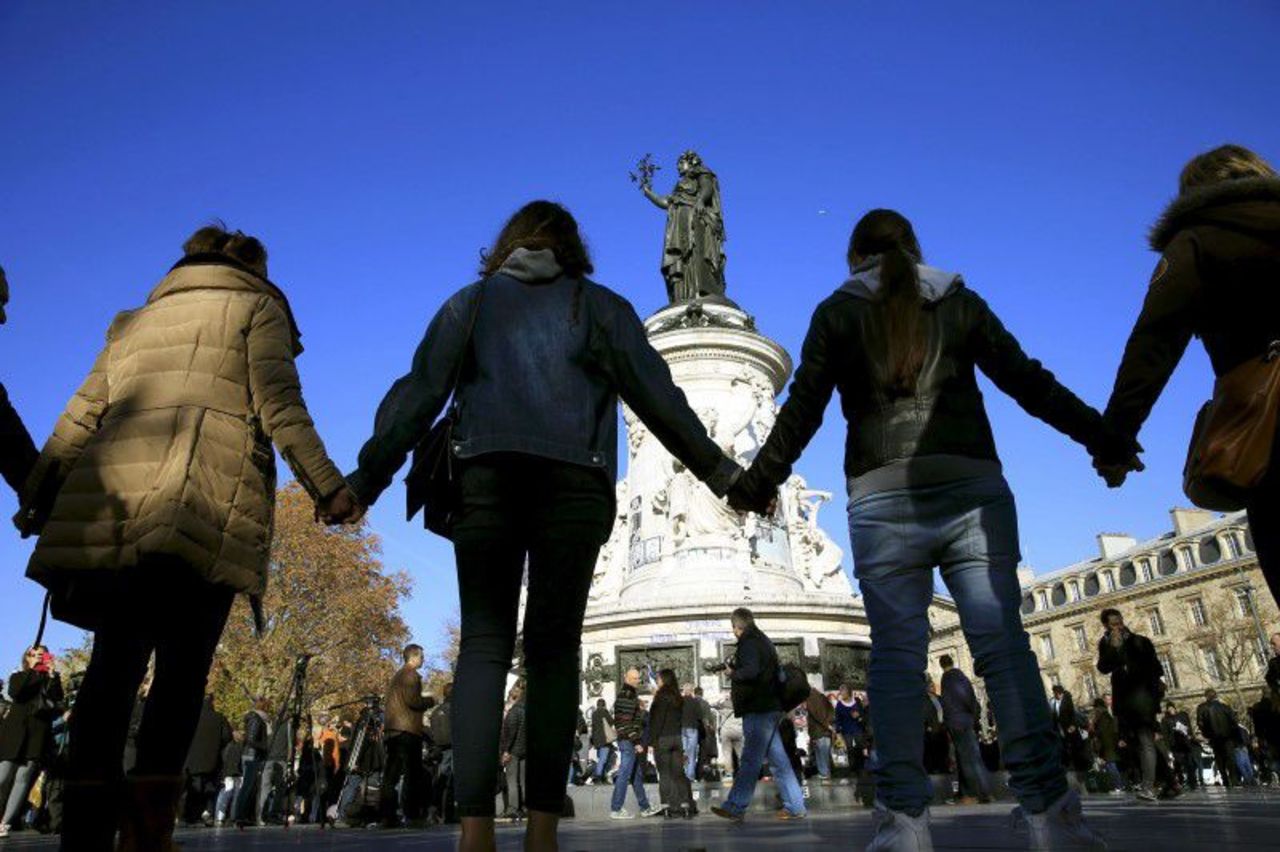 People hold hands to form a human solidarity chain near the site of the attack at the Bataclan concert hall in Paris, November 15, 2015. (Photo by Pascal Rossignol/Reuters)

PARIS/BRUSSELS (Reuters) - French warplanes pounded Islamic State positions in Syria on Sunday as police in Europe widened their investigations into coordinated attacks in Paris that killed more than 130 people.

Islamic State has claimed responsibility for Friday's suicide bombings and shootings, which have re-ignited a row over Europe's refugee crisis and drawn calls to block a huge influx of Muslim asylum-seekers.

French police have launched an international hunt for a Belgian-born man they believe helped organise the assaults with two of his brothers. One of the brothers died in the attacks, while the second one is under arrest in Belgium, a judicial source said.
A further two French suicide attackers have been identified, police said, while the identity of four other assailants, who all died in the violence, was still under review.

France has been bombing Islamic State positions in Iraq and Syria for months as part of a U.S.-led operation. Following Friday's mayhem, Paris vowed to destroy the group. Underlining its resolve, French jets on Sunday launched their biggest raids in Syria to date, hitting its stronghold in Raqqa.

"The raid ... including 10 fighter jets, was launched simultaneously from the United Arab Emirates and Jordan. Twenty bombs were dropped," the Defence Ministry said. Among the targets were a munitions depot and training camp, it said.
There was no word on casualties or the damage inflicted.
The Paris attacks were seen causing a short-term selloff in global stock markets on Monday, but few strategists expected a prolonged economic impact or change in prevailing market directions.

The investigation into Friday's attacks, the worst atrocity in France since World War Two, led swiftly to Belgium after police discovered that two of the cars used by the Islamist militants had been rented in the Brussels region.

By Sunday, Belgian officials said they had arrested seven people in Brussels. But one of the people who had hired the cars slipped through the fingers of the police. He was pulled over on the French-Belgian border on Saturday, but later released.

Police named the man they were seeking as Salah Abdeslam, saying the 26-year-old was "dangerous". Although he was born in Brussels, French authorities said he was a French national.
"The abject attacks that hit us on Friday were prepared abroad and mobilised a team in Belgium that benefited ... from help in France," French Interior Minister Bernard Cazeneuve told reporters after meeting his Belgian counterpart in Paris.

Stunned by the carnage, thousands of people thronged to makeshift memorials at four of the sites where the attacks took place, laying flowers and lighting candles to remember the dead.
"We are living a nightmare," said Caroline Pallut, whose 37-year-old cousin Maud Serrault died when gunmen attacked the Bataclan concert hall, killing at least 89 people -- the bloodiest single incident on Friday night.

"It is all so senseless. She had only just got married."
The death toll rose to 132, with three more people dying on Sunday from their wounds. Some 103 have been identified, including many young people and many foreigners, out relaxing on a Friday night in one of the world's most visited cities.

In a sign that at least one gunman might have escaped, a source close to the investigation said a Seat car believed to have been used by the attackers had been found in the eastern Paris suburb of Montreuil with three Kalashnikov rifles inside.

Police have formally named just one of the attackers: Ismael Omar Mostefai, 29, from Chartres, southwest of Paris. He was identified by the print from one of his fingers that was severed when his suicide vest exploded.

Police said they had found a Syrian passport near one of the other dead gunmen. Greece said the passport holder had crossed from Turkey to the Greek islands last month and then registered for asylum in Serbia before heading north, following a route taken by hundreds of thousands of asylum seekers this year.
The news revived a furious a row within the European Union on how to handle the flood of refugees.

Top Polish and Slovak officials poured cold water on an EU plan to relocate asylum seekers across the bloc, saying the violence underlined their concerns about taking in Muslim refugees.

Bavarian allies of German Chancellor Angela Merkel called for a reversal of her "open-door" refugee policy, saying the attacks underlined the need for tougher controls.

France has declared three days of national mourning and President Francois Hollande will make a rare address to the joint upper and lower houses of parliament on Monday at the Palace of Versailles, just outside Paris.

Illustrating the jittery mood in the French capital, hundreds of people gathered at a makeshift memorial in Place de la Republique scattered in panic on Sunday night when they thought shots had rung out. It was a false alarm, police said.

Speaking in Vienna, Iraqi Foreign Minister Ibrahim al-Jaafari said his country's intelligence services had shared information indicating that France, the United States and Iran were among countries at risk of an attack.

At a G20 summit in Turkey, U.S. President Barack Obama vowed to step up efforts to eliminate Islamic State and prevent it carrying out attacks like those in Paris. EU leaders urged Russia to focus its military efforts on the radical Islamists.

France was the first European state to join U.S. air strikes against Islamic State targets in Iraq, in September 2014, while a year later it extended its air strikes to Syria. Russia began its own air campaign in Syria in October, but has been targeting mainly areas controlled by other groups opposed to its ally, President Bashar al-Assad, Moscow's critics say.

France had already been on high alert since Islamist gunmen stormed the satirical weekly Charlie Hebdo and a kosher supermarket in Paris in January, killing 17 people.

Those attacks briefly united France in defence of freedom of speech, with a mass demonstration of more than a million people. But far-right populist Marine Le Pen is now making gains by blaming France's security problems on immigration and Islam.
"By spreading out migrants through the villages and towns of France, there is a fear that terrorists will take advantage of these population flows to hit out at us," she said after meeting the French president on Sunday.