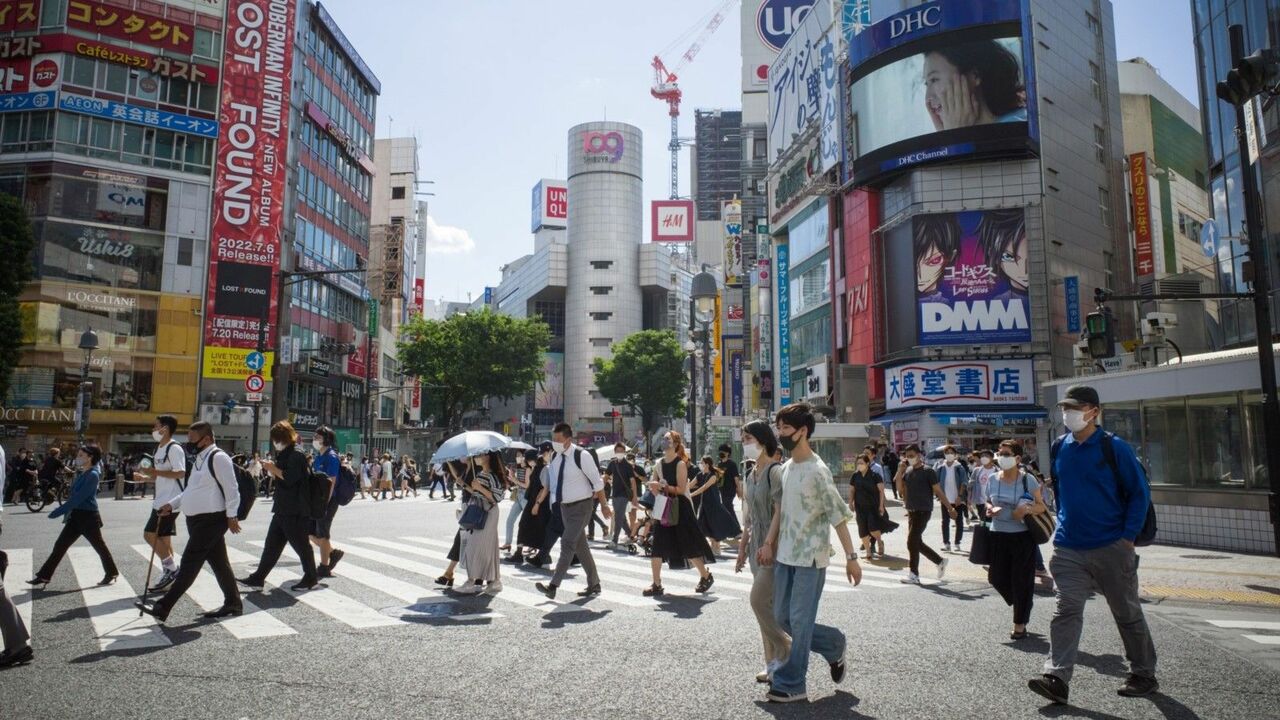 How will Japan fare if rising interest rates and the war in Ukraine send the US and Europe into a new recession? Not well, if history is any guide. It all depends on the recession’s severity—if one occurs. But the record shows that Japan’s economy is very susceptible to outsized reactions to economic shocks, including downturns originating elsewhere.

If history repeats itself, this will have two bad consequences with a lasting impact. The first, as detailed below, is a continued decline in living standards for a large share of the population, whether it be through declining real wages for many of Japan’s workers or cuts in social security spending per senior.

The second is a continued decline in Japan’s influence in Asia, reducing its ability to act as a counterweight to China. The Asia Power Index reported that, in 2021, across all dimensions of power, Japan has “for the first time dropped below the major power threshold of 40 points and is now considered a high-performing middle power.” When it comes to economic relationships, i.e., “the capacity to exercise influence and leverage through economic interdependencies” within Asia, like trade, investment, and technological leadership, Japan’s score fell from 56 in 2018, when the index was launched, to only 40 by 2021. By contrast, China’s score rose from 96 to 99.

Japan’s efforts to improve its influence through free trade agreements, cooperation on security issues, and boosts to its military capabilities are not enough to overcome the relative decline in Japan’s economic weight. It keeps falling behind the curve as other countries expand their heft and interaction more quickly than Japan. For example, Japan bought only 9% of the exports of 25 Asia-Pacific countries in 2021, whereas China’s share of their exports rose to 33%. As a result of this and similar trends, Japan’s score on trade tumbled from 37 in 2018 to 25 in 2021. Regarding regional investment, Japan’s score was close to China’s in 2018: 79 vs. 83. By 2021, Japan had fallen far behind: 56 vs. 97.

In short, Japan’s economic weakness is a threat, not just to living standards, but to national security.

A quick look shows that, when global and domestic shocks occur, Japan’s economy suffers a lot more, and for longer, than other rich countries.

Consider the frightening global financial cataclysm of 2008-09. The Japanese financial system had engaged hardly at all in the malfeasance that created this disaster. And yet, during 2007-09, Japan’s GDP tumbled 5.6%, the 21st biggest fall out of 23 rich countries in the OECD (Organization for Economic Cooperation and Development). The fall in the OECD as a whole was less than half as big: just 2.5%.

Then came COVID. Despite having far fewer cases and deaths than other rich countries, Japan suffered far more economically from the attendant containment measures and supply chain bottlenecks. Worse yet, COVID added to the burden created by the 2019 hike in the consumption tax. As a result, Japan’s real per capita GDP in January-March 2022was still 2.6% below where it was three years earlier in the spring of 2019. By contrast, in the rest of the OECD, GDP rose 2% during the same period. Except for Spain, Japan’s performance was the worst in the OECD.

Why Is Japan So Vulnerable?

Why do shocks that have milder or more temporary effects elsewhere inflict such harm in Japan? The reason lies in Japan’s violation of a pillar of modern growth theory. Even since the 1960s economists have known that, for a market economy to avoid macroeconomic instability, its growth must be “balanced,” i.e., in the long run, GDP, personal income, consumption, and investment must grow more or less at the same pace. Throughout the lost decades, personal income began lagging behind GDP growth and the situation has worsened over time. While other rich countries suffer from the same sort of imbalance, the syndrome is more severe in Japan.

In other words, not only has GDP growth slowed but less and less of the fruits of that growth are being spread to the population through wages, pensions, interest on savings, etc. From 1995 to 2018, real per capita GDP grew a total of 17%, the second-lowest growth in the OECD. Despite the modest growth that Japan eked out, median disposable income tumbled a considerable 11% for the seniors who now comprise nearly a third of the population. Working-age people suffered a 2% drop in disposable median income, mostly due to stagnant real wages.

This resulted in two kinds of instability. Firstly, the economy has required decade after decade of large budget deficits and near-zero interest rates to bolster consumption and avoid chronic recession. Secondly, even with these fiscal-monetary efforts, the economy has lost its resilience in the face of economic shocks. In short, the weakness of household income has boomeranged back on GDP, lowering Japan’s growth. Let’s look at the details.

As growth in private sector income stalled out during the lost decades, households increasingly relied on cash transfers from the government to finance their spending.

Back in 1980-92, 85% of the growth in household income was financed by growth in private sector income: wages, self-employed income, rents, dividends, interest, private pensions, and insurance annuities. Only 15% came from growth in government transfers of cash, like social security and other forms of social assistance.

Then there was a big reversal. From 1992 onward, private sector income slowed to a snail’s pace. Over almost three decades, it grew a mere 4%, just 0.1% per year in real (price-adjusted) terms. By contrast, government cash transfers, which were financed by big budget deficits, more than doubled. As a result, nearly three-quarters (72%) of the entire growth in household income was supplied by government cash. Only 28% came from growth in private sector income. Without the government’s deficit spending, consumer spending would have been far weaker and, consequently, so would GDP.

It’s, therefore, an important harbinger of the future that growth in social assistance has decelerated markedly ever since the 2008-09 recession. Whereas government cash transfers grew 3.2% per year during 1992-2008, the pace of growth has halved to 1.7% since 2008. If that slower pace continues, or decelerates even more, it will take a big revival of private-sector income to keep consumption growing at a decent pace.

There’s another, often-overlooked, factor. To keep up their spending, households virtually stopped saving and began living hand-to-mouth. Back in the early 1980s, households saved about 16% of their disposable (after-tax) income. This gave rise to the myth that Japanese people are culturally inclined to save. The savings rate eased somewhat in the late 1980s and then plunged during the lost decades. It even turned negative during 2013-15 and then averaged a meager 1.3% during 2016-19.

All of this has made Japan’s economy less able to absorb economic shocks.

In the normal course of the business cycle, an economy’s actual GDP fluctuates between a level somewhat above and below what is called potential GDP. This potential is the level GDP would be with relatively full employment and relatively full use of physical capacity. Potential growth is therefore the pace at which the economy can grow on a sustained basis. (The economy cannot go much above its potential for any length of time without setting off assorted financial and physical stresses, like inflation and/or supply chain issues.)

When there’s a recession, reserves of pent-up demand build up among both consumers and businesses. Catalyzed by temporary fiscal and monetary stimulus, recovery from recession unleashes this pent-up demand, which brings the economy back to full capacity and, due to momentum, a bit more. The relevant point is that, on average over the course of these cycles, the economy operates at around its full potential.

In Japan, however, when the economy takes a hit, households lack the financial reserves to start spending rapidly again. Moreover, with consumer purchasing power so weak, companies hold back on investing in capacity expansion. Consequently, the ability of fiscal and monetary stimulus to catalyze a quick recovery has weakened. During the last 30 years, Japan’s GDP has averaged 1.2% below its potential. Consequently, per capita GDP has struggled at a snail’s pace of 0.6% annual growth. In short, Japan thus has two problems. Poor productivity growth means the country’s potential growth rate keeps dwindling. Secondly, it cannot even operate at that potential for most of the time.

The plunging yen has made the macroeconomic imbalance even worse. It raises the yen price of all items made with imports and therefore further lowers consumer purchasing power. Nearly 40% of consumer spending is accounted for by items dominated by imports, such as energy, food, clothing, and footwear. Not counting the consumption tax hikes, the price of those items has gone up by 16% since 2012. By contrast, prices for the other 60% of consumer spending rose by just 1.5% during the same period. In short, 93% of the entire rise in the consumer price index (aside from taxes) since 2012 was driven by import-heavy items. And 100% of the rise since the beginning of 2021 was driven by these import-heavy items. There has been zero inflation since January 2021 in the measure of core inflation used by the US Federal Reserve: all items less food and energy.

No one really knows whether, or how much, the yen will keep weakening, but an increasing number of traders see the yen at ¥140-150 per dollar by the end of the year (as we write this, it’s at ¥139). If that happens, that will add to the drag on consumer purchasing power.

Readers will notice that the argument made here is similar to what Prime Minister Fumio Kishida proclaimed in his London speech: “Wage growth has been low. That has held back consumption and, by extension, overall economic growth. Japan must foster productivity growth and ensure that wages rise alongside productivity.”

Moreover, without criticizing the late Prime Minister Shinzo Abe by name, Kishida vowed to “reverse the failures of the trickle-down theories” that characterized Abenomics. Abe argued that a weak yen would increase corporate profits and lift inflation. This, in turn, would lead corporations to raise wages and invest more in new equipment, which would boost consumption and GDP. In reality, while corporate profits surged, little trickled down. On the contrary, income trickled up.

Unfortunately, Kishida is like a doctor who makes the right diagnosis but then holds back the necessary medicine. Instead, all he offers are rhetorical placebos.