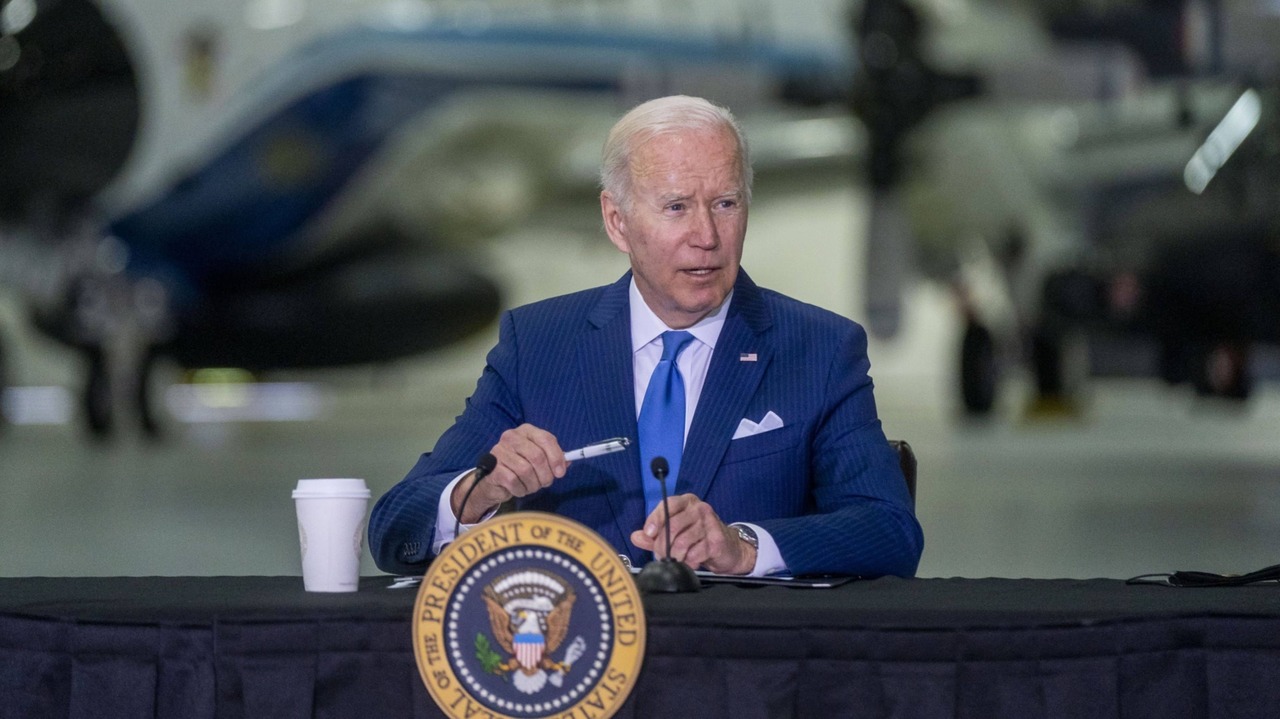 U.S. President Joe Biden has a full plate for his first presidential trip to Asia, a five-day swing through South Korea and Japan.

There will be lots of talk about strengthening alliances and bolstering deterrence in the face of Russian aggression, Chinese great power ambitions, and North Korean missile and nuclear testing.

The trip will launch a new Indo Pacific Economic Framework, a loosely drawn idea designed to counter the impression that the U.S. is abandoning economic engagement. And the trip will conclude with a summit meeting in Japan of the leaders of the Quad, the pseudo alliance of Japan, the U.S., Australia, and India.

“He will be able to demonstrate, just by his visit alone, that the administration can focus on the Indo-Pacific while dealing with Ukraine. But he can also argue that only the United States could have pulled together the global coalition that imposed really unprecedented economic and geopolitical and diplomatic consequences on Putin for his invasion of Ukraine.”

There is, however, one item that is not clearly on the President’s ambitious agenda – repairing the still yawning gap between the two American allies he is visiting, Japan and South Korea. The shift in power in Seoul to the conservative government of President Yoon Suk-yeol has created an opportunity to reverse the downward spiral in relations.

Yoon has vowed to make relations with Japan a priority, and there have been some positive initial exchanges. More importantly, Yoon is moving to reposition South Korea in line with the global and regional framework shaped by the Biden administration.

Senior American officials believe that there is a window open but the question remains whether all the parties, including the U.S., will do enough to capitalize on it.

The issues of wartime history and the bitter heritage of Japanese colonial rule in Korea remain a formidable obstacle, despite plentiful shared interests in other realms, from supply chain resilience to the North Korean threat. Both Seoul and Tokyo are at a moment of standoff – both think the next move to break the ice should be taken by the other.

The inability of Japan and Korea to restore normal relations serves to undermine the U.S. efforts to assert a values-driven purpose to its presence in the Indo-Pacific.

The failure of two American-allied democracies to cooperate undermines this strategy, whether it is the elevation of the Quadrilateral Security Dialogue to a broader alliance or Japan’s idea of a “Free and Open Indo-Pacific.” It creates an opportunity for China or Russia to drive wedges between the U.S. and its allies.

All of this has acquired even greater urgency with Russia’s invasion of Ukraine, as the U.S. and Europe seek to rally allies across the globe, and particularly in Asia, to a common cause. If this is a struggle between democracy and authoritarianism, as they assert, the visible gap between Japan and Korea is a glaring problem.

During the years of the Trump administration, when the current downturn in Japan-Korea relations began, there was little if no attention to this challenge. Under the advent of the Biden administration, with its commitment to a policy of revival and strengthening of alliances, this has changed.

There has been a drumbeat of statements and meetings of officials, stressing the importance of trilateral cooperation. But there also remains manifest frustration, till now, with the inability of Korea and Japan to transcend the legacy of wartime history – a familiar lament of American officialdom.

The Biden administration includes many veterans of the Obama administration, some of whom dealt with the earlier downturn in Korea-Japan relations at the beginning of the Abe and Park administrations. The same debates that took place at that time are being replayed. Some American officials want to place the focus on reminding Japan and Korea of the strategic imperatives that should unite them.

Others recognize that geopolitics, even when married with a values-based approach, cannot succeed without confronting the issues of wartime historical justice that lie at the root of the breakdown in relations.

The advent of a conservative administration in Seoul, and to a lesser extent the transition to the Kishida Fumio administration in Tokyo with a Foreign Minister (Hayashi Yoshimasa) who has close ties to Washington, has created some limited optimism.

The upsurge in North Korean missile testing, and its preparations for renewed nuclear testing, combined with the global imperative of the war in Ukraine, would seem to create momentum to improve relations and draw the three countries into closer security cooperation.

But some senior Biden officials, including ones with deep previous experience, warn against the idea that normalization of relations, much less reconciliation, can occur place without active American involvement, though not necessarily mediation, in the disputed historical issues.

“I disagree that we should not be engaged,” a senior Biden official told a recent closed-door meeting on US-Japan relations, attended by this writer. “There is some urgency here.”

This official, speaking off the record, went so far as to argue that Korea-Japan relations had a higher significance than efforts to promote the Quad or a regional ‘Free and Open Indo-Pacific’ association. Moreover, he indicated that this would require grappling with the wartime history issues.

“The single most important thing the U.S. can do is to help effect rapprochement that is sincere,” the senior official said. “This is a noble and important endeavor and one we should not shy away from taking.”

So far, however, there is no overt effort to put this on the Biden agenda for this trip. Instead, the emphasis is on other parts of the U.S. plans where Japan and Korea might cooperate, for example strengthening supply chain resilience and creating a digital services framework agreement in the Indo Pacific.

The lack of a visible American push may reflect the problems of domestic politics in both South Korea and Japan that limit the ability of both governments to move ahead. The Japanese official position is that the responsibility for the first step lies with Korea.

Tokyo demands that Seoul slow down, if not halt, the implementation of court decisions to seize the property of Japanese companies to pay compensation to Korean forced laborers used during the colonial and wartime periods.

Japanese officials also want the Korean government to restore the 2015 agreement which created a Japanese-funded foundation to pay compensation to the surviving Korean women forced into sexual servitude by the Japanese Imperial Army during the war.

The previous progressive government of Moon Jae-In effectively dismantled that agreement. That set in motion a chain of back and forth retaliatory measures, including Japan’s imposition of export control measures on precursors for semiconductors in Korea.

The new Yoon administration has already stated its position that the 2015 agreement remains in force. And there is clearly an effort to hold off the seizure of Japanese company assets. But Yoon is not in a position to go much further without some clear public signals from Japan given Korean public opinion on these issues.

He already faces significant challenges from the opposition-controlled National Assembly, his opinion poll support rating is below 50 percent, unusually low for a new president, and he faces a crucial test on June 1 local elections.

“Yoon has much less room to maneuver,” compared to Prime Minister Kishida, believes Asian expert Tobias Harris, author of an authoritative biography of former Prime Minister Abe Shinzo. “A gesture from Kishida would go a lot further and would be politically more doable if Kishida had the political courage to do it.”

The Japanese government still bears the scars of its experience with the Moon government. “The Japanese feel like they were burned,” says a former senior American official active on these issues and who is close to the Biden administration. “The Japanese are sitting on the sidelines now,” he says, but “the ball is in the Japanese court.”

Kishida faces criticism from within the ruling Liberal Democratic Party where he has been seen as being “pro-Korean,” mainly due to his role as Foreign Minister in negotiating the 2015 agreement. That may explain his unusual decision to raise the issue of a statue dedicated to “comfort women” victims in Berlin during a late April visit to Tokyo by German Chancellor Olaf Scholz.

“The Japanese rightwing has decided that Japan doesn’t need South Korea,” says Harris. “If Kishida thinks that cooperation with South Korea is important, he is going to have to make the case for it.”

In the past, however, Japanese leaders have often needed clear pressure from the United States to take the risk of opening the door to improving relations with South Korea, particularly when it comes to dealing with wartime history problems.

President Biden has personal experience with this, playing a key role in mediating between then Premier Abe Shinzo and South Korean President Park Geun-hye when he was Vice President.

“There is nothing to suggest that it is going to be a top priority” on this visit, says Harris. But, the real action may take place behind closed doors, he adds. “I wouldn’t be surprised if it would be more of an issue when Biden is sitting in the room.”