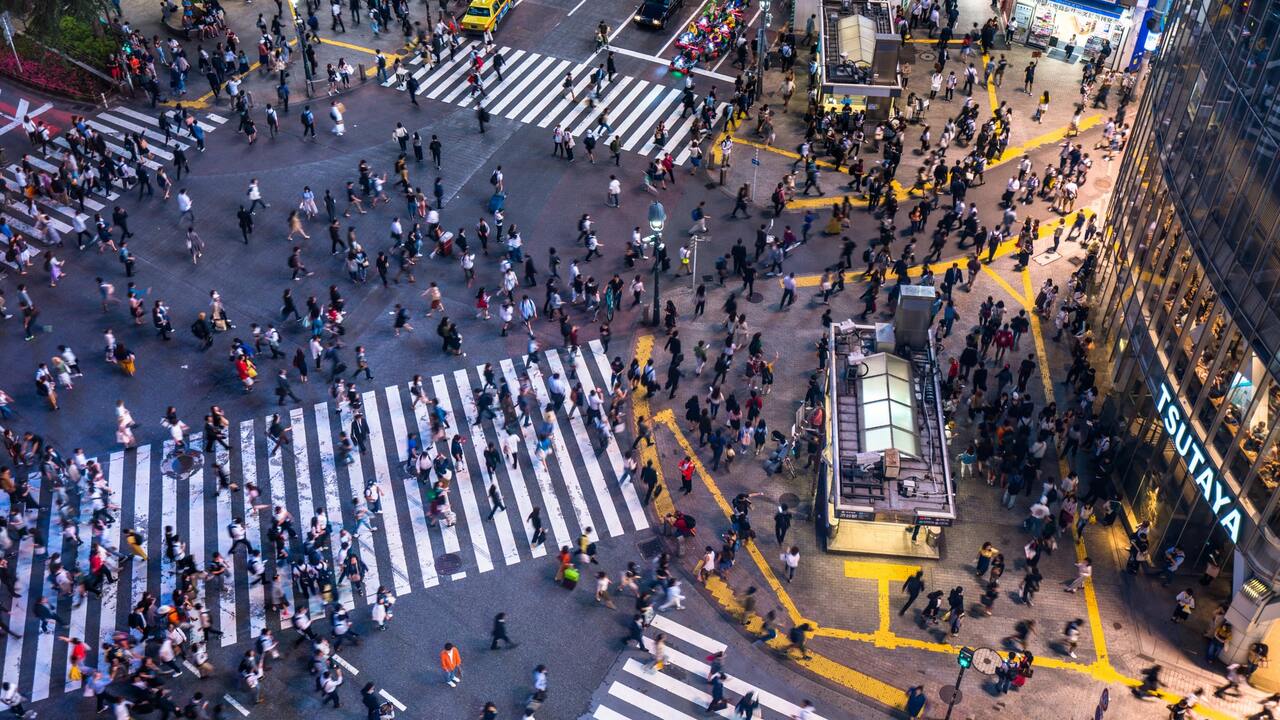 Japan is hardly the only rich country where real (i.e., price-adjusted) wages have been suppressed in the last few decades. But it’s the only one where wages have not just slowed, but actually fallen. Across the mature economies, wages have stopped doing what they had been doing for a century or more: growing at around the same rate as GDP.

During 1995-2017, productivity, i.e., GDP per work-hour, grew 30% in 11 rich countries. However, real hourly compensation (wages plus benefits) grew only half as much: just 16%. While Japan’s productivity growth matched the others at 30%, worker earnings fell 1%. This performance is particularly shocking considering that, until recently, Japan’s workers got a higher share of national income than workers elsewhere. 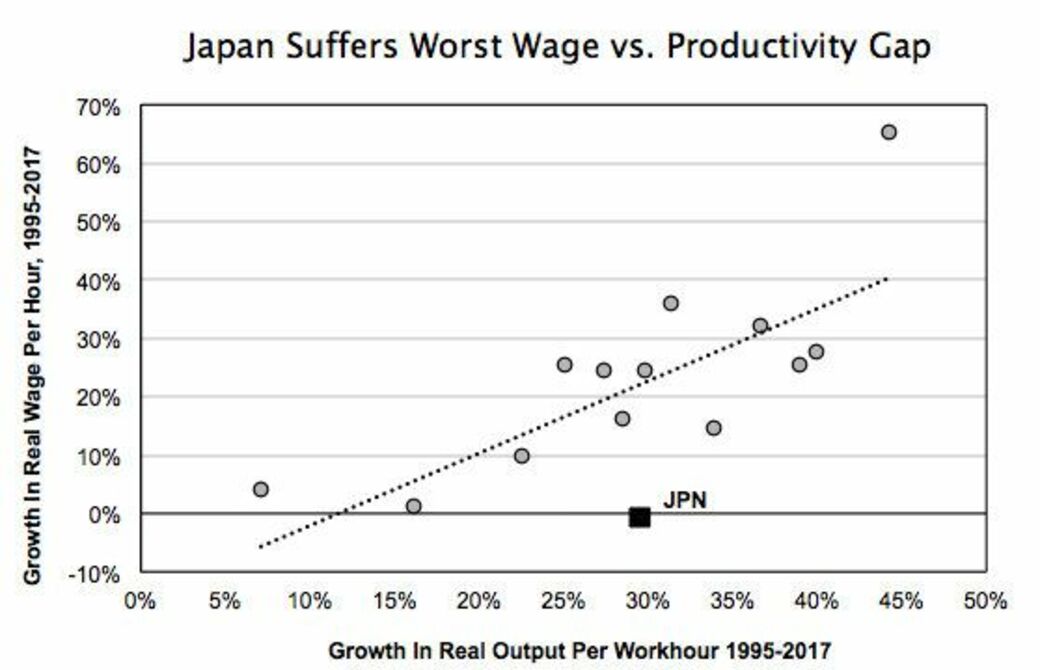 This widespread slump in wage growth defies both history and economic theory. For decades, the textbooks have told us that, in order for a market economy to be stable over the long term, consumer demand—and hence wages—have to grow around the same pace as output. Consequently, ever since the 1800s, the share of national income going to workers as opposed to owners of capital (in the form of profits, interest, rent, and dividends) has fluctuated around a fairly constant level.

For some reason, things changed a few decades ago. “In advanced economies, labor income shares began trending down in the 1980s, reaching their lowest level of the past half-century,” the IMF reported in 2017. According to the OECD, from 1990 to 2009 the share of labor share declined in 26 of 30 rich countries, with the typical decline being from 66.1% to 61.7%.

One consequence is ever-rising budget deficits. Since suppressed wages result in anemic consumer demand, most rich nations have had to make up for the shortfall in overall demand by spending a lot more than they receive in taxes.

The question is why. Some economists contend that the primary cause is technological, i.e., the rise of Information and Communications Technology (ICT). Others put more emphasis on the weaker bargaining power of labor. While it’s likely to be some mixture in most rich countries, Japan’s result is so unusual that the political balance of power probably plays a larger role.

Is ICT Different From Past Technologies?

Many economists believe that ICT is somehow different. More than past technologies, it has decreased demand for labor, particularly unskilled or semi-skilled labor, while increasing demand for high-skilled labor, but to a lesser degree. That’s why more of the fruits of growth have gone to owners of capital.

The IMF estimated that new technology is responsible for half of the entire decline in the labor share of national income. This effect is amplified somewhat by globalization, although globalization plays a smaller role than populist politicians contend. The OECD estimates that technology and related matters are responsible for 80% of the decline in labor’s income share. In this view, technology is destiny, and little can be done to alter the trend.

Is this a permanent change or just another fluctuation that will eventually self-correct? Self-correction has been the outcome of labor-saving technology, ever since “Luddite” workers of the 1830s smashed machines in the cotton mills.

When technology destroys some jobs, the rising income provided by improved productivity gives rise to the demand for new jobs, typically requiring more education. Workers then get higher wages. Is it likely that, on a long-term basis, ICT is any different than past technologies? The OECD states that there’s not enough data yet to tell whether the labor share decline “will progressively disappear when the process of diffusion of ICT-based technologies slows down.” Only time will tell.

While ICT is important, it cannot be the whole story since wage suppression began during the late 1970s to early 1980s: two decades before the marriage of the Personal Computer and the Internet sparked the ICT revolution. Moreover, since rich nations have access to the same technology, why do countries differ so much in the size of the wage-productivity gap?

Hence, some experts stress the pivotal role of politics, i.e., a plunge in the bargaining power of labor. As early as 2001, Olivier Blanchard, who would later become chief economist of the IMF, argued that the decline in the wage share resulted from weaker unions, neoliberal deregulation measures, and the weakening of past alliances between labor and political parties.

In the typical OECD country, union membership peaked in the late 1970s at half of the entire labor force. Since then, it has steadily tumbled to just 20%. In Japan, a third of workers were in unions during 1960-75; now it’s just 17%.

At the same time, as antitrust laws were weakened, a few “superstar” companies gained an inordinate share of the market in a growing number of leading industries. That gave them greater bargaining power vis-à-vis both consumers and employees. The labor share declined more severely in such industries.

To the extent that politics, and not just technology, is at play, then policy solutions are more feasible, but only if policymakers choose to use them. One big clue is that the fate of wages from country to country depends very much on their politics. Three of the four countries where wage growth actually surpassed productivity growth were the three Scandinavian countries, where labor has great political strength.

On the other hand, three of the four countries where labor’s share of national income declined the most were Japan, the US, and Korea, the three countries with the smallest share of the workforce covered by collective bargaining agreements.

One example of how policymakers can shape the situation is the fact that the labor share of income can be raised by several percent of GDP by so-called “active labor measures.”

These are measures that help workers who’ve lost jobs find new ones via retraining, programs to match employers and employees, etc. Confidence in being able to get a new job makes workers more willing to resist demands for wage restraint. Not surprisingly, Japan and the US and come near the bottom in spending on such measures as a share of GDP, while the Scandinavians spend the most.

The Rise of the Non-Regular Worker

Global trends explain part of the wage suppression in Japan, but not why the fall in Japan was worse than elsewhere. What is different about Japan? The biggest factor is the sharp upsurge of poorly paid non-regular workers. They rose from 15% of the labor force in the 1980s to nearly 40% these days. While regular workers, on average, earn ¥2,500 per hour, temporaries get just ¥1,660 and part-timers just ¥1,050.

Beyond this, the growth of the non-regulars has weakened the bargaining power of the regulars. That’s one reason that, from 2007 to 2018, the real wage of regular workers fell by 1%.

Economists Kyoji Fukao and his colleagues have confirmed that the rise of non-regulars has been a substantial factor in the declining labor share in Japan. Economists have found the same for Korea. And yet, there are countries in Europe with lots of non-regular workers but a very different impact on wages.

France shows the starkest contrast with Japan. Even though non-regulars comprise a third of the labor force, France suffered only a small wage-productivity growth gap during 1995-2011. What makes the difference?

In both countries, the law requires equal pay for equal work. France enforces the law, including with the use of labor inspectors. In Japan, by contrast, no Ministry is mandated to investigate the problem and prosecute violators. Victims have to launch and pay for their own lawsuits.

Moreover, virtually all French workers—both regular and non-regular—are covered by union contracts, whether or not they belong to the union. In Japan, only union members are covered by the contracts and, by law, neither temporary workers nor those sent by dispatch agencies are allowed to join a union.

It’s true that the average wage of French nonregulars is 20% below that of standard workers. However, once one adjusts for the fact that so many non-regulars work in occupations and companies that also pay regulars low wages, the wage gap disappears.

Finally, France spends 2.2% of GDP on active labor measures, the fifth highest out of 25 OECD countries. To be sure, France’s non-standard workers face many difficulties, from fewer hours of work to denial of certain benefits to great difficulty in moving to regular status, which is also a problem in Japan. Outright pay discrimination, however, is not one of their problems.

United Front of Regulars and Non-Regulars?

There may be some good political news that could have a positive impact, particularly since a growing shortage of labor should eventually improve workers’ bargaining power.

Traditionally, labor unions have been a kind of “club for regular workers.” Many unions preferred that the non-regulars be kept as a “cushion” to be let go in downtimes so as to preserve their own job security.

However, a legal restriction on contract coverage has given some unions an incentive to organize non-regulars. Unless unions include a majority of workers in a company, they lose their right to bargain over certain issues, such as overtime. Consequently, many unions now find that they need to recruit part-timers in order to maintain their bargaining rights.

In 2001, just 14% of unions were willing to organize part-timers. That figure rose to 24% by 2010, while 69% of unions still explicitly banned part-timers. 2010 brought the founding of UA Zensen, a new federation of industrial unions. As of 2019, half of its 1.7 million workers were part-timers. It bargained for equality in pay and other conditions for non-regulars.

They were most successful when they could demonstrate to employers how this would improve efficiency. By 2017 (latest numbers available), part-timers comprised 12% of all union members, triple the rate in 2005. By 2017, 16% of the members of the giant Rengo union federation were part-timers.

Given that millions of “temporaries” work for years at the same company, often doing the same job as regulars, the law should be changed to allow them to join the union after working for a certain period of time.

It was a Japanese economist, Hirofumi Uzawa, who in 1961 convinced economic orthodoxy that the long-term stability of the labor share of GDP was not just a strange coincidence, but a precondition for macroeconomic health. It is time for Japan’s policymakers to pay heed.