By Jun Onishi : Instructor of Foreign Personnel, AEON
May 18,2021 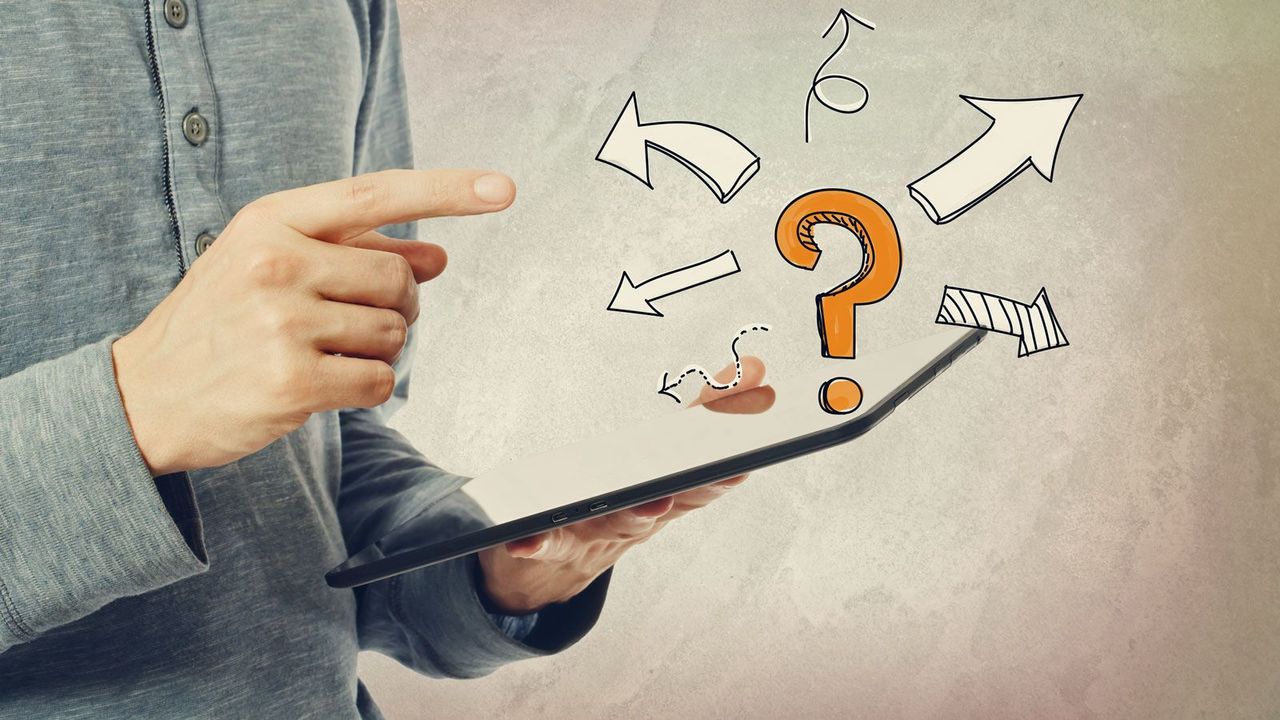 With each passing year, it seems more and more English loanwords are added to the Japanese lexicon. Perhaps some of this can be attributed to the COVID-19 pandemic, with words like クラスター (kurasutā, cluster) and パンデミック (pandemikku, pandemic) being thrown around by everyone—specialists, newscasters, governors, even your average “salary man”. But if you pay close attention to how these English-based words are actually being used in Japan, you’ll notice that they either don’t exist in standard-form English or the loan words may be used in completely different ways when compared to the original.

Japanese-English words such as “claim”, “tension”, “baby car” and “my pace” continue to confuse both EFL and native English speakers alike, and with new wasei-eigo words appearing each year, it’s hard to keep track of them all. Hakoda-sensei takes a look at some of the more recent katakana English words and how they can be properly communicated in natural English.

Let’s start with a loanword that’s been frequently popping up in the news: クラスター (kurasutā, cluster). Japan’s Ministry of Health, Labor and Welfare defines “cluster” as “a group of five or more people with primary exposure reported at a common event or venue”. The word “mega cluster” (メガクラスター; megakurasutā) is used for a concentration of 50 or more cases.
Let’s compare how “cluster” is defined by Kenkyusha's “English-Japanese Dictionary For The General Reader” and Pearson Education’s “Longman Dictionary of Contemporary English”.

Longman Dictionary of Contemporary English includes “events” or “cases of illnesses” in its definition. Although terms like “disease clusters” and “transmission clusters” do exist in the English language, rather than using the word “cluster” itself, a specific number of cases are more often cited when reporting COVID-19-related news.

If you’ve ever taken part in a Japanese business meeting, you may have heard the word “halation” being thrown around. For example,

ハレーション (harēshon) comes from the English word “halation”. This is yet another example of an English loanword that is far removed from its origin. “Halation” is a photography term that is defined in English as:

The Japanese “halation” takes the above definition and reinterprets it to mean, “having a negative impact or causing conflict”. Why this word took on this meaning is anyone’s guess.

ハレーション (harēshon) is often combined with the verbs 生む (umu; to create) or 引き起こす (hikiokosu; to cause). Take a look at some of the examples below:

In other words, you don’t want to end up being the source of ハレーション (harēshon) in the workplace.

Another English-Japanese word that seems to be popping up everywhere is サステナブル (sasutenaburu), which comes from the English word “sustainable”. In Japan, this word is often used to mean “an improvement in the quality of life or the economy while not bringing harm to the environment”.

The “English-Japanese Dictionary for the General Reader” and “Longman Dictionary of Contemporary English” defines the term as follows:

Nowadays, the word “sustainable” has become synonymous with “SDGs” which is an acronym for “Sustainable Development Goals” (持続可能な開発目標; jizoku kanōna kaihatsu mokuhyō). SDGs are a series of 17 global goals that were unanimously adopted in 2015 by all 193 Member States of the United Nations. These goals are intended to be achieved by year 2030. 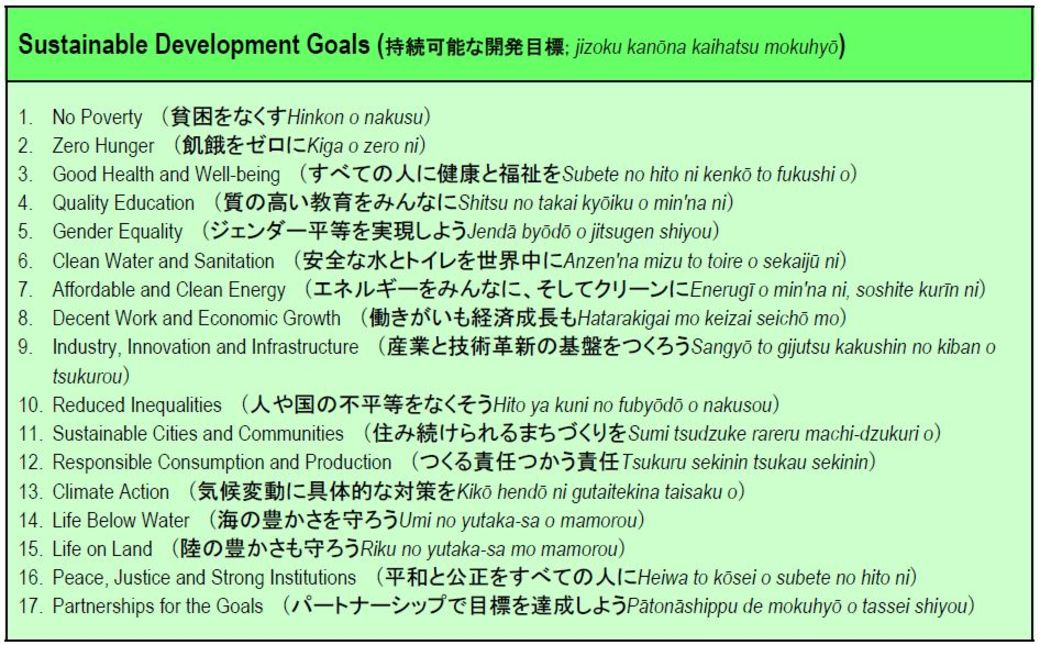 The goals are broken down into 160 targets, and we’re already starting to see the effects of SDG in our everyday lives. For example, retail shops including supermarkets and convenience stores have begun charging shoppers for plastic bags. It has also become mandatory to refer to school children using the gender-neutral suffix “-san” (as opposed to the more gender-specific “-kun” and “-chan”). In such ways, SDGs are altering the way we live our lives—and will continue to do so over the next 10 years.

Have you ever heard of the term ノマドワーカー (nomadowākā) or ノマドワーク (nomadowāku)? It’s the Japanese equivalent of the word “nomadic worker”, which means someone who works away from the office and uses telecommunication technologies to make a living in a nomadic manner. A close friend of Hakoda-sensei’s was under the false impression that the word ノマド stood for 野窓 (のまど; nomado), with 野 (no) being an abbreviation of 野良 (nora; outdoor field, stray) and 窓 (mado) meaning “window”. In other words, “a person working outside using a Windows PC.” It’s not exactly a “nomadic” worker, but the meanings are practically the same!

“Nomadic worker” comes from the word “nomad”, which in Japanese is 遊牧民 (yūbokumin; nomad) or 放浪者 (hōrō-sha; wanderer). The dictionary defines “nomad” in the following ways:

“Work from home” has several different synonyms or juxtaposed terms in Japanese: ノマドワーク (nomadowāku), テレワーク (terewāku), and リモートワーク (rimōtowāku) and its meanings may vary depending on the user. While it’s difficult to state the concrete differences, Hakoda-sensei introduces some consistencies in the way these terms are described.

ノマドワーク (nomadowāku) often refers to freelance workers. Although this isn’t clearly stated in its definition, the nomadic sense of “freedom” may extend to one’s employment status as well. テレワーク (terewāku) seems to give off an image of a working style in which one is not tied to the office. The word is also commonly associated with government policies. The Japan Telework Association defines the term as “a flexible working arrangement not bound by time or space, which utilizes information and communication technology (ICT)”. In a broad sense, テレワーク (terewāku) seems to point to a way of working that cuts down on the time needed for commuting into work. Finally, リモートワーク (rimōtowāku) is a more general term commonly used in companies that simply refers to work conducted outside of one’s office.

In English, the words “digital nomads”, “teleworkers”, and “remote workers” are equally varied in usage. However, “digital nomads” implies an embracing of a location-independent, technology-enabled lifestyle, where people have the freedom to choose where they want to work and to go anywhere in the world.

In both languages, these words could mean any number of things, so it wouldn’t hurt to ask for clarification. Finally, when talking about “working from home” regardless of one’s employment type, use the word 在宅勤務 (zaitaku kinmu).

The COVID-19 pandemic has rapidly changed the way we all work. Whether you’re working in an office or working from home, there are advantages and disadvantages to both. Hakoda-sensei prefers an arrangement where half of the work week is spent working from home while the other half is spent in the office. However, a nomadic workstyle isn’t for him.

Do you prefer working from home or in the office? Or, would you rather be a digital nomad?