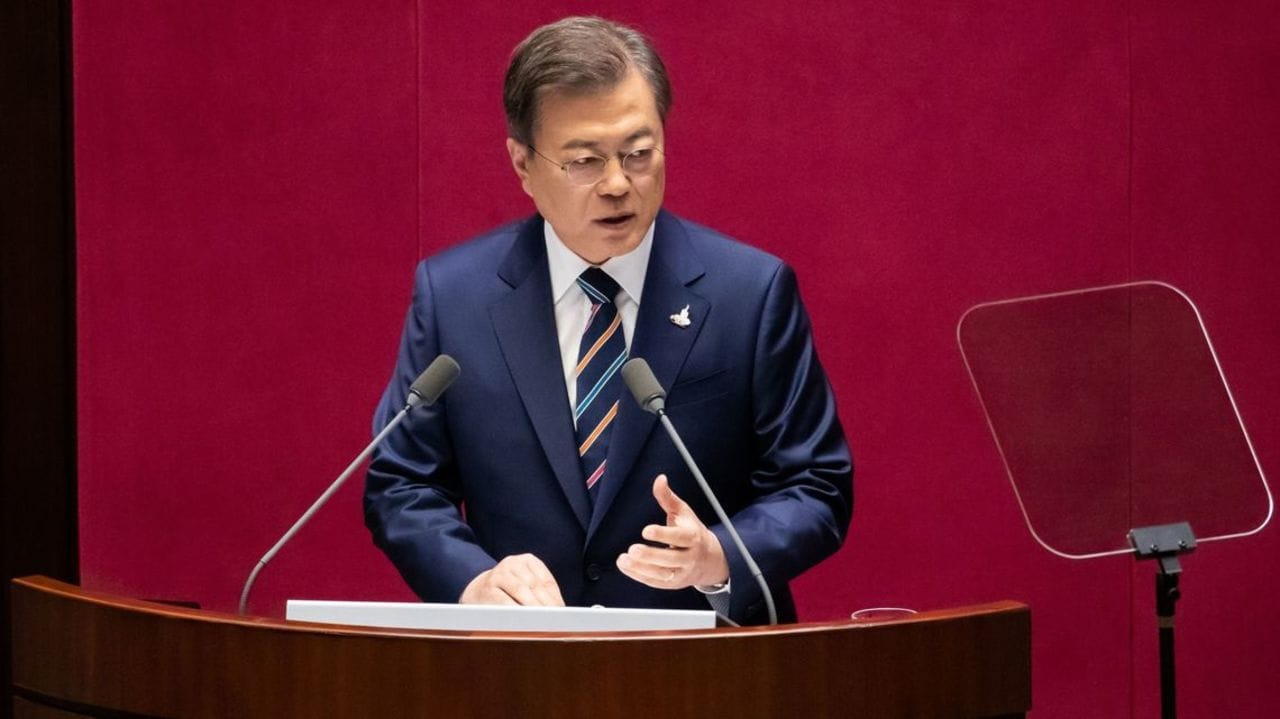 Inside the Biden administration, there is a deepening frustration over what is described as a “painful” breakdown of relations between Japan and South Korea. In meeting after meeting, American officials from the President on down are preaching the importance of trilateral cooperation between the United States and its two key allies in Northeast Asia.

That cooperation is a key piece of the Biden administration’s broader strategy to confront China. The administration’s North Korea policy, nearing the end of its review, depends in part on the three countries lining up together.

Publicly, the U.S. extracts ritual statements of support for trilateral coordination, and holds meetings of senior officials, focused on forging a joint response to North Korea, and hopefully China. Privately, senior U.S. officials are pushing Korea and Japan to make real progress in restoring working relations, even to resolve the issues of wartime history that continue to plague their relations. So far, however, there is no evidence of serious talks on the history issues.

The recent decision of the Seoul Central District Court to dismiss a suit by Korean victims of wartime sexual servitude, so-called military comfort women, has generated some hopes that both governments might find a route out of the current impasse.

The South Korean government of President Moon Jae-in has been signaling some flexibility and interest in improving relations. Senior Korean officials have gone out their way to tell their American counterparts that it is the Japanese who are holding up any progress.

The Japanese government has indeed offered a cold response to the Korean signals, arguing that they first need to see actions to shut down the legal challenges over comfort women and forced laborers. Japanese officials have written off the Moon government and place their hopes on a conservative government coming to power next year in South Korea.

Both Prime Minister Suga Yoshihide and President Moon are weakened politically and their room to maneuver is even less than previously.

“It is unlikely that the Korean government would change its positions and suggest mutually agreeable solutions to Japan,” says former South Korean Foreign Minister Yu Myung Hwan, a key bridge between the two countries. The losses by the ruling progressive party in the Seoul and Busan mayoral elections, and Moon’s plummeting popularity, make it highly unlikely there will be a breakthrough until after the presidential election next March, predicts Yu, who previously served as Korean Ambassador to Japan.

The recent Japanese parliamentary by-elections have similarly weakened Suga and made him even more under the sway of hardline conservatives in the ruling Liberal Democratic Party who oppose any concessions on wartime history issues. Japanese public opinion, shaped in part by conservative media in Japan, reflects the view that Korea is an unreliable partner.

“Suga has to pay attention to public opinion because the LDP is facing difficulties in the coming election of the House of Representatives this year,” observes Tokyo University Professor Kawashima Shin, an expert on wartime history issues. “If Suga makes any positive response to Moon’s approach, it would be a negative factor for Suga and for the LDP.”

The war for Washington’s favor

At the moment, the two American allies are engaged in a fierce, though undeclared, the war in Washington, trying to convince the new administration to take their side.

The latest exchange of fire took place when Prime Minister Suga visited Washington in April. The attention of Japanese and American media was focused on the discussion of China, and on Taiwan. Most observers missed the rather blunt statements on Korea issued by Suga, first at his joint press conference with Biden and then again in an appearance at the Center for Strategic and International Studies (CSIS).

While making a nod toward trilateral cooperation, Suga pointedly pressured the U.S. not to retreat from a commitment to complete denuclearization of North Korea, using a term favored by the Trump administration, calling for “CVID,” or Complete, Verifiable, Irreversible Denuclearization.

Suga’s remarks were a clear effort to head off any move by the Biden administration, after its policy review, to seek an arms control style deal with Pyongyang that would leave its shorter-range missiles, and its existing nuclear arsenal, intact.

He called recent tests of short-range ballistic missiles by the North Koreans a “clear violation of United Nations Security Council resolutions” and a “threat to the peace and security” of Japan and the region. Negotiations, he said, must eliminate the threat of “ballistic missiles of all ranges possessed by North Korea.”

President Moon, who is heading to Washington in May, responded with an interview with the New York Times. Moon laid responsibility on Donald Trump for the failure of the summit talks with North Korean leader Kim Jong Un. His message to Biden was to resume direct talks with the North Koreans as early as possible, a goal that is central to Moon’s own political agenda.

The court ruling opens a door – will Suga and Moon walk through it?

Despite the battles for Washington’s favor, the April 21 decision by the Seoul District Court could have a significant positive impact on the history wars. The decision effectively contradicted the decision by a similar level court in early January which had ruled that the Japanese government had to provide compensation to 12 former comfort women, supporting the argument that principles of international human rights overrode claims to exemption from such suits based on state sovereignty.

The April decision in a suit by a separate group of women was in line with established international law, say Korean legal experts and likely to be upheld over the earlier decision.

“The court came back to the classical authentic attitudes on the sovereign immunity issue,” Seoul National University legal scholar Heo Seongwook told me. “Most probably, this conclusion will be maintained at the appeals court.”

In his ruling, Justice Min Seong-Cheol also significantly referred to the 2015 agreement reached by Japan and the previous conservative government of Park Geun-Hye in South Korea to attempt to settle the issue of compensation and apology to the Korean women victims.

That agreement created a Japanese-funded Fund which provided compensation, accepted by two-thirds of the surviving victims, along with an expression of apology. The suits were filed on behalf of supporters of the Korean organization representing those who rejected this settlement.

Justice Min acknowledged that the results of that agreement may not have been “fully satisfactory compared with the pain they had to suffer through in the past,” but that it did have validity as an existing agreement and was a Japanese offer of a “remedy for the violation of rights.”

The progressive government had unilaterally dismantled the 2015 agreement, closing down the operations of the Fund in support of activists who opposed the deal. But following the January court decision, which triggered a harsh response from Tokyo, Moon reversed course slightly. He expressed dismay at the decision and acknowledged that the 2015 agreement remained in force as an official pact.

Moon’s shift seems to have set the stage for the reversal in the District Court. “President Moon’s remarks…indirectly influenced the decision,” says Professor Park Cheol Hee, a prominent expert on Japan at Seoul National University. “Still there is no evidence that Blue House gave any guideline to the court.”

By reaffirming the 2015 agreement, the Korean court and Moon have “opened the door to diplomatic negotiation between Korea and Japan,” says Professor Park. But the obstacles remain considerable. On the Korean side, Moon is reluctant to take the next obvious step and reopen the comfort women fund established in 2015, accepting that as the basis for dealing with those victims who remain to be included.

Japanese official response to the court decision has been extremely cautious, led by the Prime Minister’s Office and the LDP.

“I think that now it depends on Suga,” says former foreign ministry official Togo Kazuhiko, who has been a voice for compromise on history issues. “If Suga sees this verdict as an opportunity, he has a room to move.” And if the April ruling loses on appeal, Suga can always argue that he did his best to improve relations, says Togo.

The other time bomb hanging over this is the potential decision of the Korean courts to dissolve the assets of Japanese corporations which were judged to have to pay compensation to former Korean forced laborers from the wartime period.

That case is legally more solvable as it involves individual plaintiffs and private firms but the Japanese government has pressured the firms not to yield, arguing it is a violation of the 1965 treaty which normalized relations between the two countries and settled, in principle, such wartime claims.

In Japan, there are voices in favor of improving relations with South Korea, echoing American officials who see the strategic importance of bringing Korea in with Japan in the broader response to China. But Suga personally opposes any concessions and shares a deep mistrust of the Moon administration, based on his eight years as Chief Cabinet Secretary to Prime Minister Abe Shinzo, says Professor Kawashima.

That leaves Washington waiting for an opening to help repair these damaged relations.

“President Biden fully understands the delicate history issues between Korea and Japan,” former South Korean foreign minister Yu told me. Biden played the role of mediator on these issues during the Obama administration, setting in motion the diplomatic engagement that led to the 2015 agreement, in which Yu played a key role. But conditions may not yet be ripe to repeat that effort.

“I believe President Biden will wait until next year, when a new team is installed in both Korea and Japan and ready for compromise,” the Korean diplomat says, “a compromise for the sake of their legacy and also for the betterment of all involved, including the United States.”