The Teachings of Demon Slayer

Demon Slayer: Kimetsu no Yaiba the Movie: Mugen Train (劇場版『鬼滅の刃』無限列車編, Gekijō-Ban “Kimetsu no Yaiba” Mugen Ressha-Hen) is out in theaters. And in only 10 days, it became the fastest movie in Japanese box office history to gross 10 billion yen. Over the following month, the movie reached an audience of over 17 million with box office revenue exceeding 23.4 billion yen. The Demon Slayer craze is still going strong.

“The movie made me cry.” “I’ve seen it twice already!”

With so many people gushing over the film and movie licensed products lining store shelves everywhere, Kimetsu no Yaiba is getting harder and harder to ignore. Hakoda-sensei has also been an avid reader of the hit manga and has decided to use this opportunity to pore over both the Japanese and English books to compare Demon Slayer-related keywords.

If you’re planning on discussing the movie/manga with Japanese friends or you’re interested in learning more about the demon-slaying, sword-wielding, beautifully illustrated world of Kimetsu no Yaiba, do read on.

The manga was serialized in Weekly Shōnen Jump from 2016 to 2020 and the anime adaptation helped catapult Kimetsu into mass popularity.

The story takes place in Taishō-era Japan. A young boy named Tanjiro Kamado returns from a trip to a nearby village to sell charcoal, only to discover that his family had been slaughtered by a demon. The sole survivor is his younger sister Nezuko, who has been transformed into a demon herself. Thus, Tanjiro begins his quest to help his sister regain her human form.

As the story progresses, he is recruited by the Demon Slayer Corps, an organization whose purpose is to hunt down all demons. Kimetsu can be described as a Japanese-style dark fantasy.

The kanji for鬼 (ki) in kimetsu can also be read as oni (demon). 滅 (metsu), which means to slay, can also be read as horobosu (滅ぼす, to destroy, overthrow, wreck or ruin). Blade in Japanese is written as 刃 (yaiba or ha), which may also refer to the edge of a knife or sword. This kanji is similar to 刀 (katana), which means sword, dagger or knife. It’s not clear whether the author intended for Kimetsu no Yaiba to mean ‘demon slaying blade’ in a general sense, or ‘demon slayer’s blade’ which refers to a specific sword wielded by demon slayers.

The official English title of Kimetsu no Yaiba is simply “Demon Slayer”.

In other words, the focus for the English title likely shifted from the blade itself to those who slay demons. Or perhaps the word slayer isn’t pointing to a person but rather the weapon used to slay demons. “Demon Slayer’s Weapon” isn’t the catchiest of titles, though. And “Demon Slayer’s Blade” could refer to any number of weapons. On the other hand, “Demon Slayer’s Sword” limits the weapon of choice to just one. To avoid any confusion, omitting the second part of the Japanese title, 刃 (yaiba), may have been a wise move after all.

The organization that Tanjiro joins is called the Demon Slayer Corps in English and 鬼殺隊 (Kisatsutai) in Japanese. 殺 means kill and is read as satsu or korosu in its transitive verb form. 隊 represents a group or a squad and is read tai. The special blades used by the Demon Slayer Corps to slay demons is called Nichirin swords. These blades maintain their original Japanese naming of 日輪 (Nichirin) which literally means the sun. The word is made up of two kanjis, 日 (nichi, day) and 輪 (wa, circle). ‘Sword of the Sun’ might have been a more apt translation, but from a manga storytelling perspective, ‘Nichirin sword’ has a much better ring to it—pun intended.

Astronaut Soichi Noguchi, upon his recent return to the International Space Station, credited his crew’s ability to overcome the challenges of space flight through the use of 全集中の呼吸 (zen shūchū no kokyū, Total Concentration Breathing).

This 全集中 (total concentration) has become a buzzword here in Japan. ‘Total Concentration’ refers to concentrated breathing patterns used by the Demon Slayers Corp which increases the users’ lung capacity and amount of oxygen in the bloodstream. This enhances their physical abilities and mental concentration so that they can fight on par with demons more powerful than the average human.

Breaking down the words, 全 (zen) means total, 集中 (shūchū) means concentration, and 呼吸 (kokyū) means breathing. The kanji for ‘Total Concentration: Constant’ is written using the kanji 常 (jō) which means always, and 中 (chū) which in this context means during. Note that 常 can also be used as an adverb 常に (tsuneni). When it’s time to get down to business, you might want to announce “Total Concentration!” and let your boss know that you’ve switched into ‘serious mode’.

Tanjiro has the ability to see a 隙の糸 (suki no ito, an opening thread) which allows him to identify when and where an enemy ought to be attacked. The official translation calls this ‘an opening thread’. The kanji used in the Japanese books is 隙 (suki, gap) and this infers an opening in which to strike. 糸 (ito) means string or thread, so a clearer translation might have been ‘a thread to the unguarded spot’. But most likely, the term ‘an opening thread’ was chosen for its simplicity and ease of use.

The progenitor of many demons, Demon Lord Muzan Kibutsuji (鬼舞辻 無惨, Kibutsuji Muzan) and the group of twelve demons that he commands (十二鬼月, Jūnikizuki) are very powerful demons who Tanjiro must face as the story progresses. These twelve demons are known in English as ‘The Twelve Kizuki’. This, along with ‘Nichirin Sword’ are examples where the original Japanese names are retained within the English translations.

In addition, each of the Upper and Lower Rank demons are numbered from one (壱, ichi) to six (陸, roku). So in English, the Twelve Kizuki are ranked with Upper Rank 1 (上弦の壱, Jōgen no Ichi) being the strongest and Lower Rank 6 (下弦の, Kagen no Roku) being the weakest. Note that the manga uses a kanji numbering style known as 大字 (daiji or ‘large letters’), which is a specific set of kanji used for financing purposes to prevent people from falsifying written numbers such as 一, 二, and so on (e.g. by adding an extra line to 一 to make 二). The use of daiji dates back to the Nara Era, so it makes sense that they would appear here in this pre-modern story.

Had the translators of Kimetsu stuck closely to the Japanese lunar-referenced names, we would have been left with complicated labels like ‘the third First Quarter Moon Demons’ or ‘the third demon of the first quarter moon’. Saying “Upper Rank 3” (or ‘Upper 3’ for short) is more practical and stylistically better.

Demons possess special abilities. In the English version, these abilities are known as ‘the Blood Demon Art’. This is a direct translation to the Japanese 血鬼術 (kekkijutsu).

Just as the Twelve Kizuki are the top-ranking demons, the Demon Slayers Corp also has powerful swordmasters called the Hashira (柱). In Japanese, 柱 (hashira or pillars) can also be used as a counter for buddhas, gods and nobles. This is most likely the inspiration for ‘the Hashira’ name. Once again, if we were to use a more literal translation for this group of elite demon slayers, ‘Pillars’ would be their name—and that wouldn’t exactly strike fear into the hearts of the demons. Thus, ‘the Hashira’ was a great English naming choice.

There are in total nine members of the Hashira and each member wields a different Breathing Style (呼吸, kokyū). 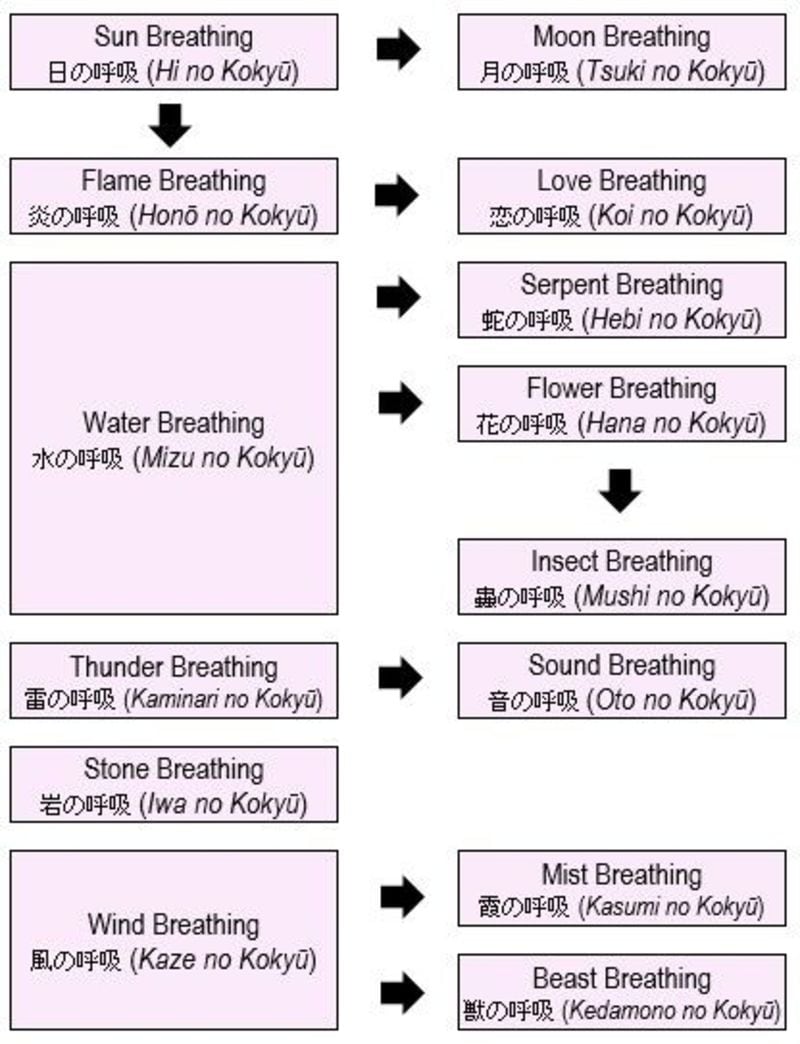 炎 (honō) can be translated into English as flame or blaze, which is distinctly different from the word 火 (hi or ‘fire’). 蛇 (hebi) is the kanji used for ‘snake’, although it may also refer to larger snakes and serpents. In the case of Kimetsu, ‘serpent’ was most likely chosen for dramatic purposes. All Breathing Styles are translated directly, so they should serve as effective tools for learning important and often-used Japanese terms.

Each Breathing Styles comes with a variety of different techniques known as ‘Forms’. The number of Forms differ depending on the Breathing Style, but each is numbered and labeled with a specific technique name. Let’s take a closer look at the Water Breathing Form used by Tanjiro and Giyu Tomioka:

Each technique is masterfully translated. For those interested, take the time to compare how the original Japanese words are translated into English. For example, the Eleventh Form: Dead Calm is written as 凪 (Nagi) in Japanese. As a noun, this kanji represents the calming of the seas after the winds have died down. In the story, Dead Calm requires the swordsman to cease any body movement and enter a state of complete defense. Therefore, both the Japanese 凪 (Nagi) and the English ‘Dead Calm’ are suitable names to describe such a technique.

In Japanese, ‘Form’ is written as 型 (kata). When used as a suffix, kata is attached to names of specific models, types, styles or patterns. In the case of Kimetsu, it’s used as a numbering system where the previously mentioned 大字 (daiji or ‘large letters’) and the katakana particle ノ (no) is used with the suffix 型 (kata). So for example, the Eighth Form will be labeled 捌（はち）ノ型 (Hachi no Kata). In addition, modified versions of the Water Breathing Form such as ‘Turbulent’ and ‘Curve’ are also introduced in the story. The modified attack ‘Turbulent’ is written as 乱 (ran, or ‘raging’) and 曲 (kyoku, or ‘curve’).

There are countless of other Forms introduced in Kimetsu. In addition, certain characters wield similar but alternate modes of fighting. For example, Inosuke Hashiraba uses a Breathing Techniques called ‘Fangs’ (牙, kiba) instead of ‘Forms’, while Shinobu Kochi uses a technique called ‘Dance’ (舞, mai).

Reading the English and Japanese Manga

The Japanese Kimetsu no Yaiba has 23 volumes in total, with the 23rd (and final) volume releasing on December 4, 2020. If you’re looking to read the English version, Demon Slayer is available up to Volume 18, with Volume 19 releasing in December. Hakoda-sensei points out that the English version costs nearly three times as much as the Japanese Kimetsu no Yaiba manga. If you’re not ready to spend a lot of yen, why not pick up Volumes 7 and 8, which are the pages that have been adapted into the feature film out in theaters now.

Whether you’re a Japanese person looking to brush up on English or you’re from an English-speaking country looking to study Japanese, Kimetsu no Yaiba might just be a great new source for learning new vocabulary. Just be sure to approach your studies with Total Concentration!