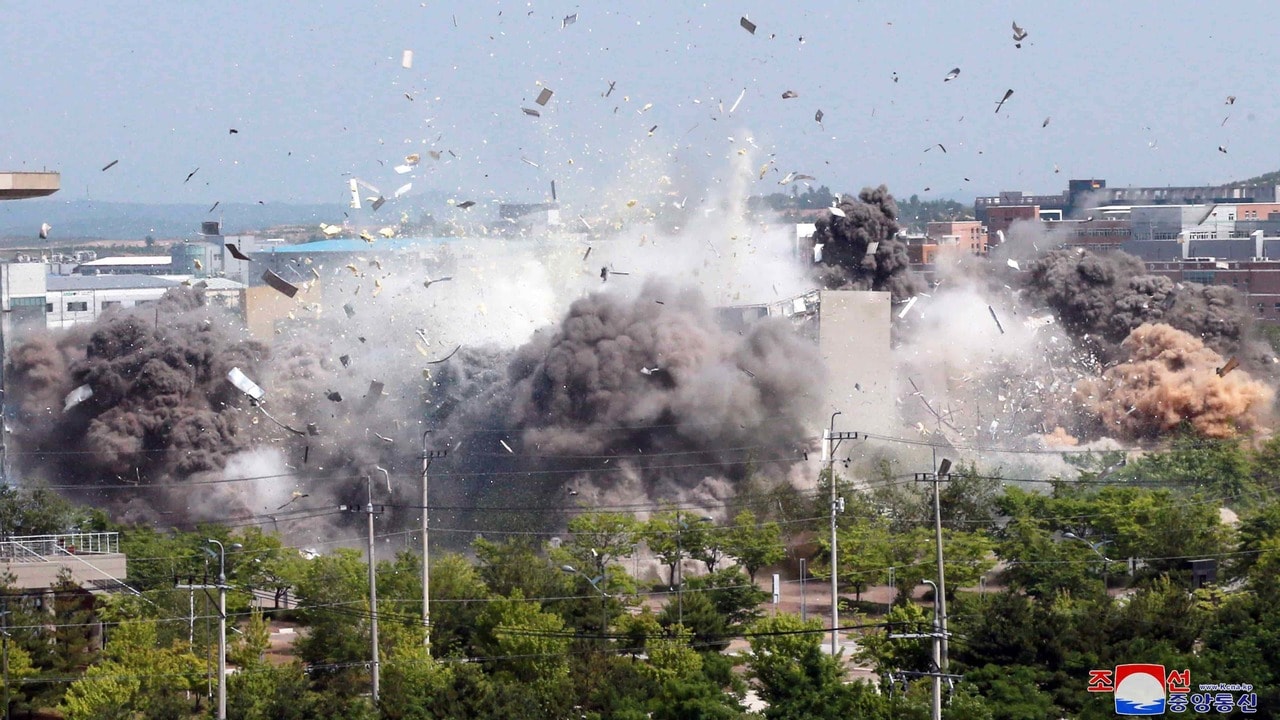 (Photo by KCNA via REUTERS）)

As tensions rise between North and South Korea, attention has understandably focused on the role of the Dear Sister, Kim Yo Jong. The sibling of North Korea’s Supreme Leader Kim Jong Un has emerged as the face of a nasty and provocative assault on South Korea.

Once the symbol of Pyongyang’s ‘smile diplomacy’ toward South Korea, the stern Kim now issues snarling denunciations of South Korean president Moon Jae-in. In her recent public statements, she claims to be in charge of unleashing the military to threaten the south and literally dismantle the few symbols of more than two years of North-South engagement.

North Korean dictator Kim Jong Un remarks largely out of sight, prompting ongoing speculation on his health and encouraging analysts to see the recent tension as mostly a platform to elevate his sister as his successor. But a deeper look inside North Korea points to a different culprit behind this new crisis – the Covid-19 virus.

Already struggling to overcome the impact of international sanctions, the North Korean economy has suffered a sharp downturn due to the need to seal the country off to prevent the spread of the virus from China. The economic distress seems to have made the regime even more worried about its control over a restless population. And it has added a level of desperation to the need for aid from the outside.

The escalation of rhetoric is intended to convince the South Korean government and ruling party to “break from the U.S.-driven sanctions regime,” a senior U.S. official in Korea told me. “I think they want the South Korean government to put into place legislation that would open up funding streams,” he explained, which would mean scrapping restrictions on trade and investment with North Korea, bypassing international sanctions.

North Korea’s economic situation was difficult last year but its trade with China and Russia - both official and illicit transfers that evade sanctions -- combined with the growing role of the market, made things manageable. “The overall situation was improving modestly over past years,” reports a Western aid worker who visits the North regularly, most recently late last year. “It reflects the determination of the people to survive and because they had a bit more freedom to make money in the market.”

Then the virus hit in January. The North Korean regime had experience with the previous epidemics of SARS and Ebola, says the aid worker, who has extensive knowledge of the medical system. It moved quickly to close the border with China on January 21, mirrored by Chinese efforts to seal the border from its side. According to the U.S. official, additional units of the Korean People’s Army were deployed on the border to crack down on smuggling operations.

“They didn’t have much choice,” the Western aid worker told me. “They know what could happen and that is why they reacted the way they did. They know their health care system is weak.”

The border closure sent a shock wave through the North Korean economy, cutting off the flow of tourists and their hard currency, curbing what little investment came from China, and drastically cutting official and unofficial trade. Almost overnight, Chinese exports to North Korea dropped to nearly zero, along with official North Korean exports to China (see graphic below). Some smuggling seems to have continued but analysts believe the border closing affected that as well. Bottom line - the flow of money and credit from China dried up.

The virus-driven downturn comes at a moment when the state-run sectors of the economy were already facing a systemic collapse. “Their planning system is completely broken down,” says William Brown, a former Central Intelligence Agency analyst who specializes in the North Korean and Chinese economies. According to Brown, there has been no mention of a new 5-year plan to replace the one that ends this year. Important segments of the economy – mainly large state enterprises that produce steel and other key goods – still depend on the planned system to deliver inputs and provide rations and wages to their workers.

Kim tried to get Trump to lift the sanctions last year at the Hanoi summit but failed, triggering a re-examination of North Korean policy in the aftermath. In a major policy turn in 2019, the North Korean leadership re-emphasized the need for “self-reliance,” once a watchword of their ideology. Now, says the former CIA analyst, “self-reliance means that you be self-reliant, not the nation.”

Monetary policy is a key weakness of the regime, argues Brown. The fear of uncontrolled inflation meant the adoption of a tight monetary approach, limiting the printing of the Won. On the plus side, it yielded some 5 years now of a steady exchange rate, creating the appearance of stability, and also encouraging growing use of hard currency in circulation. But on the downside, the state is not capable of pumping credit into its state-run enterprises. “They are telling the big steel mills and others, become self-reliant – don’t ask for money from us,” reports Brown.

Now the virus shut off the flow of hard currency from cross border trade and tourism and investment. In response, the regime announced in mid-April it would issue public bonds for the first time in 17 years. The bonds were to be used instead of cash to pay factories for materials needed to carry out big state projects, such as a massive new hospital in Pyongyang. But they were also aimed at forcing individuals and firms to turn in cash they had hoarded cash, including dollars, in exchange for the bonds.

This is hardly a popular decision, and the regime is cracking down on resistance. According to a report in Daily NK, which relies on defector networks, the director of a mining operation was arrested by state security and executed for criticizing the bond issuance at a meeting.

In April, the North Korean authorities also reportedly told private traders that they could restart their activities only if they gave significant foreign currency payments to the regime and imported from an approved list of goods, half of which would be required to give to the government. Smugglers were ordered to shift away from profitable electrical appliances and focus on basic food goods. According to a May 11 report by Radio Free Asia, the state banned the use of foreign currency for most transactions.

A meeting of the senior leadership of the Workers’ Party of Korea on June 6 and 7, chaired by Kim Jong Un, focused on the economic situation. At the top of the agenda was the need to urgently reconstruct the chemical industry, mainly to produce fertilizers, on a “self-reliant” basis – a clear signal that there are shortages of the plastics and fertilizers needed for agriculture. Due to sanctions and the border closing, “farmers don’t have the inputs they need – fertilizers, plastic sheeting, spare parts, fuel, not to mention tractors,” reports the Western aid worker, who has traveled extensively outside of Pyongyang over the past year. “We are heading for difficult times.”

Food supply always is in shorter supply at this time of year as the stocks from the previous harvest are depleted and there is not yet enough fresh food available. “It is not easy for people and especially those living in remote areas where farming is not easy to do,” the aid worker told me. “Spring and summer have always been difficult. Trading is now at near halt and there is a quarantine impact on cargo. There is not much gasoline available for internal transport. All this is putting more and more pressure on the regime.”

The second item at the June Political Bureau meeting was equally telling – “immediate issues of ensuring living conditions in the capital city.” This is a sign that the regime is having difficulties keeping up the flow of goods to the core elite living in Pyongyang, which has been essential for buying their loyalty.

Beginning last year, after the Hanoi failure, Pyongyang criticized the South for its failures to act independently of the U.S. But the current assault is a clear step up in attempts to coerce the Moon administration and the ruling progressive party. “The reason that the north-south agreements…did not see any light of even a single step of implementation was due to the noose of the pro-U.S. flunkeyism into which [Moon] put his neck,” Kim Yo Jong wrote in her June 17 statement.

Whether the Moon government is ready to open its coffers to the north remains to be seen. So far, the North Korean moves have been carefully calibrated not to provoke an uncontrolled ladder of escalation. The initial step of blowing up the joint liaison office took place on North Korean territory. Even the threatened moves to dismantle the progress in demilitarizing the border areas does not directly touch on U.S. or United Nations Command forces.

“They’re going to take their time with this,” predicted the U.S. official. “I don’t see the impetus to escalate quickly. They may overshoot the mark but if they are thinking rationally, they will take an action, take some time to see how Blue House responds to it, and then ratchet it up again.”

Meanwhile the pressures within will continue to mount on a regime that has no real answers for a population long tired of belt-tightening in the name of an unresolved civil war.