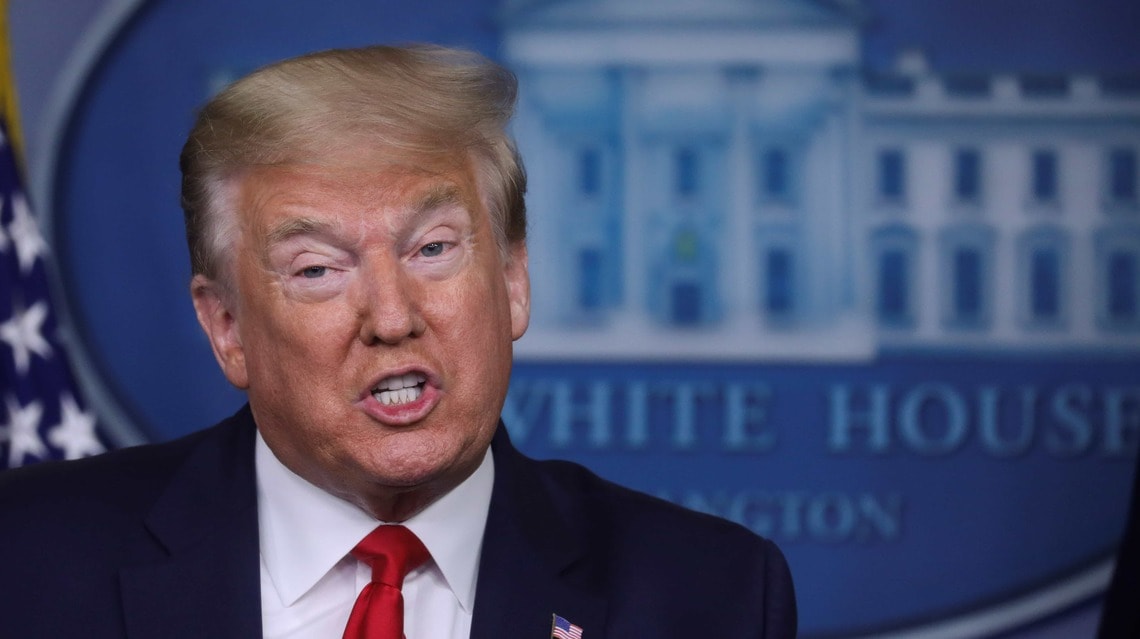 The rhetorical clash between China and the United States over the Covid-19 pandemic escalated to new heights this past week. Harsh language and taunts are now a daily event, feeding growing concern that the war of words could lead to more serious tensions over Taiwan or the South China Sea.

Both Chinese President Xi Jinping and U.S. President Donald Trump face challenges to their legitimacy and political future from the pandemic and are equally eager to deflect responsibility for the crisis.

The Chinese regime has mounted an aggressive campaign to promote the superiority of its system and assert global leadership, despite widely held doubts about the veracity of its claims. It has hawked xenophobic propaganda blaming foreigners, even the U.S. military, for the spread of the virus.

In Trump’s case, the urgency is even greater thanks to the presidential election campaign. The campaign now places central responsibility on China, labeling his Democratic Party opponent, former Vice President Joe Biden, as “Beijing Biden.”

This strategy was laid out in a confidential Republican strategy memo on April 17th which instructed candidates to accuse Democrats of being ‘soft on China’ and claim the virus is “a Chinese hit-and-run followed by a cover-up that cost thousands of lives.”

“This election is going to be a referendum on China,” predicted Trump advisor Peter Navarro in a television interview this past week.

When Trump signed a trade pact with China on January 15, things were quite different. The trade deal was a centerpiece of a re-election strategy touting a booming economy and having put ‘America First.’ And for the next two months, Trump issued a string of praises for China and Xi, including the handling of the virus.

Then came a stunning collapse of the stock market, a looming recession, and rising infection rates. “Trump completely panicked after Covid and the economic collapse hit his campaign,” former Obama administration National Security advisor on Asia, Jeffrey Bader, told me.

“He had to find a new villain. He had to come up with all these conspiracy theories about how the Chinese handled the virus. There is a whole disinformation campaign these guys are orchestrating.”

Trump is pushing for the U.S. intelligence community to provide evidence to support this effort, according to reports in the New York Times and other publications, and confirmed to me by a senior intelligence official.

“Regarding Trump's next steps, he has tasked the entire US intelligence community, including CIA (Central Intelligence Agency), NSA (National Security Agency), and DIA (Defense Intelligence Agency), to search all of their files--intercepts, humint (human intelligence), whatever--to find out if China is responsible for COVID-19,” the senior official told me. “When this kind of tasking takes place, it is almost certain there will be some type of ‘intelligence’ that can be overstated, manipulated, overblown, to make the case--any case.”

The official compared this to the pressure brought by former Vice President Dick Cheney on the CIA to provide evidence of a link between Iraq and Al Qai’ida and the September 11 attacks to justify the invasion of Iraq.

“While there is no denying the importance of determining how this came about,” he said, “it is equally hard to escape the conclusion that Trump will politicize the intelligence as a means of distraction from his own abysmal management and leadership in dealing with the Pandemic. Of course, all of this is intended to serve one purpose: his re-election.”

In an unusual joint article in Foreign Policy, three former senior CIA officials warned against the politicization of intelligence by the Trump administration. They wrote:

“This pattern of politicization is particularly concerning now, as the country confronts the coronavirus pandemic. The answers to key intelligence questions—Did the coronavirus emerge from nature or escape from a Chinese lab? To what extent did the Chinese government misrepresent the scope and scale of the epidemic? — will have profound implications for the future of U.S. national security policy, especially concerning China. We know Trump’s preferred answers to those questions. What we don’t know is whether the career analysts in U.S. intelligence agencies will be allowed to speak the truth when they uncover it.”

Behind the anti-China campaign

With Secretary of State Mike Pompeo leading the charge, the Trump administration is mounting a global campaign against China, including a 4-page letter sent to the World Health Organization this week accusing it of doing the handiwork of the Beijing regime.

In recent days, Trump and his close advisors have moved beyond their earlier attempts to pin Chinese responsibility on their suppression of information on the infection, or the lab origin theory, to a bolder charge that the Chinese government deliberately spread the disease out into the world.

In a tweet this past week, Trump accused China of “trying desperately to deflect the pain and carnage that their country spread throughout the world.” Trump advisor Navarro, a key figure in the anti-China policy, told ABC News this past week that “China sent hundreds of thousands of Chinese on aircraft to Milan, New York and around the world to seed” the virus.

This theory was first laid out in a little-noted commentary by Lewis “Scooter” Libby, a former senior aide to Dick Cheney and now Senior Vice President at the Hudson Institute, a conservative thinktank that has become the most important influencer of the administration’s China policy.

In the essay, published on April 29 in the conservative National Review, Libby argued that Xi and the Communist Party leadership were under increasing threat from multiple challenges – the protests in Hong Kong, the re-election of the pro-independence Taiwanese government, exposure of the suppression of Chinese Muslims, and most of all, the stumbling of the Chinese economy due to the Trump administration’s tough trade policy. With Trump heading for re-election, party dissent against Xi was mounting, he wrote.

The Covid-19 outbreak in China posed a new challenge for Xi. “As long as the virus raged primarily inside China — derailing only her economy, stigmatizing only her government — his troubles would soar. All the while, the world predictably would have leapt ahead, taking Chinese customers, stealing China’s long-sought glory.”

But the pandemic had a potential upside, Libby argued. Its spread would divert attention from the Chinese regime’s internal woes and “rendered disease-weakened nations more susceptible to China’s goods,” he wrote. Trump’s re-election was no longer certain and a weakened economy would impact U.S. defense spending.

In Libby’s account, Xi went beyond simply taking advantage of an opportunity. The Chinese regime deliberately “let tens of thousands of travelers, infected among them, leave China and enter an unwary world.” All of this, he concludes, is part of the quest for world domination by Xi’s inner circle. “A fever for Chinese primacy burns among them.”

Libby is no stranger to the construction of these kinds of narratives. He was Cheney’s point man in pressuring the CIA to support the false claims that Iraq was building weapons of mass destruction and was linked to the 9/11 attacks. He was convicted in 2007 of perjury and obstruction of justice for his attempts to discredit a diplomat who disputed those claims. Surprisingly, Libby was pardoned in April 2018 by Trump, even though former President George W. Bush refused to do so, despite pleas from Cheney.

“Libby’s presentation has the feel and smell of yet another problem in the making,” said the senior intelligence official, comparing this to his role in the Iraq war buildup.

“This is Scooter’s ‘wag the dog’ fantasy,” agreed another former senior intelligence official with long experience in Asia. He dismissed Libby’s belief that the Chinese leadership would have an interest in spreading the pandemic around the world.

“Party legitimacy, Xi's position, and China's future depend on sustained growth, even if the rate of growth is much slower,” the former intelligence official told me. “Spreading CV19 could only further depress Chinese growth and accelerate realignment of supply chains in ways that disadvantage China. Chinese leaders understand that.”

The alarm over China’s assertiveness is widespread in U.S. policy circles. But Hudson is home to a group of policy makers who articulate a much darker view of China as both a totalitarian state and one with long-term plans for global domination. Writers like Michael Pillsbury, who enjoys access to the President, as well as Libby and others are based at the thinktank. Vice President Mike Pence delivered his major hardline China policy speech in late 2018 at Hudson, as did Secretary of State Pompeo in October 2019.

Hudson has also become the favored channel for the Abe administration to reach the White House. Prime Minister Abe Shinzo has delivered several major addresses at Hudson where Libby, a personal friend, introduced him. Hudson President Kenneth Weinstein, another Abe friend, has been nominated to be U.S. Ambassador to Tokyo.

While Trump’s views of China seem mostly to reflect his obsession with trade imbalances and his neo-isolationist impulses, men like Pompeo, Navarro and Libby have deeply held views on the China threat.

“For the ideologues, this was their magic moment to overcome resistance,” Bader argues. “Trump went along with it because he needs an election plank. The true believers don’t know if Trump is going to win or not but they are putting as much in place as they can before November.”