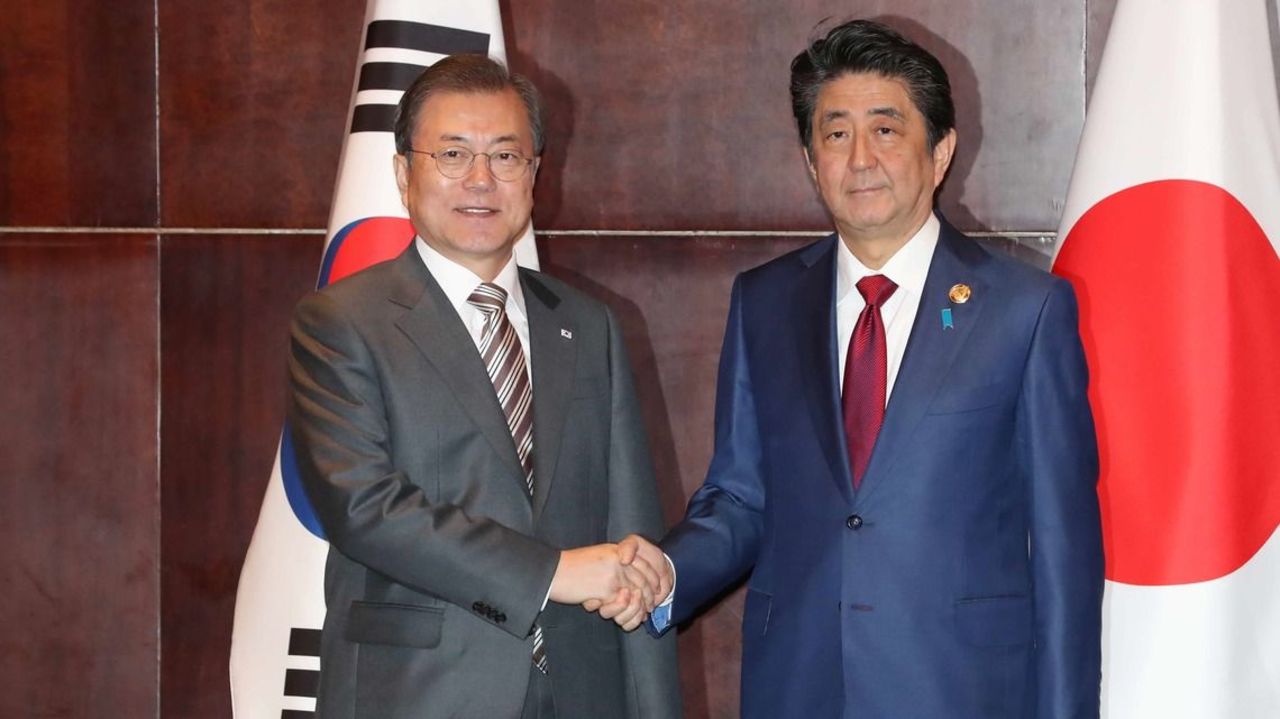 This past year marked the lowest point in relations between Japan and its neighbor, South Korea, since the two countries established diplomatic relations more than a half century ago. As the new year dawns, however, there are glimmers of hope that the tide is slowly turning.

The meeting in China between South Korean President Moon Jae-in and Japanese Prime Minister Shinzo Abe in China at least demonstrated that channels for dialogue remain open. Before that, trade officials met in Tokyo to discuss the export control measures imposed by both sides, followed by a small step from Japan to ease restrictions on key exports to Korea related to semiconductor manufacture.

And with the threat of a court order to seize the assets of Japanese companies looming, Korean legislators are discussing a compensation plan for former forced laborers that might offer a way out of that difficult issue of wartime justice.

This is a fragile process that could break down in the blink of an eye, but informed actors in both Korea and Japan see reasons for guarded optimism.

“Our bilateral relations now cannot get worse and there is a growing consensus among our people that Korea cannot afford to let its relations with Japan break down completely,” former South Korean Foreign Minister and Ambassador to Tokyo, Yu Myung Hwan, told me. “I think we have passed the lowest point,” says Yu, who has been a key figure in Japan-Korea relations.

Still, Yu warns, “one time-bomb is left – when, and how, the seized assets of Japanese companies might be cashed in.” For now, Korean courts have only taken preliminary steps to sell those assets, but if they actually move to do so, “Abe will have to respond likewise and that will surely provoke another downward spiral in relations,” he predicts.

The lawyers for the Korean laborers who brought the suit claiming compensation remain in a dialogue with the Moon administration, delaying the next steps. But this will not last forever – “I am not fully optimistic at this point,” Yu told me.

A veteran Japanese journalist specializing in foreign affairs takes a somewhat less upbeat view of where things may be headed. “I hope this bilateral relationship has hit the bottom, but I don’t find a solid reason to say so,” the senior editor told me. “I am one of the guys who predict that this cold war between Abe and Moon is likely to go on in a mild way next year.”

For now, there is a cease-fire in this crisis. But neither Moon nor Abe are highly motivated to find an early solution.

The impact on Japan from the economic boycott in South Korea, most visible in the dramatic drop in Korean tourists coming to Japan, is still minor. Combined with pressure from the U.S. to ease tensions, “Abe has some incentive to move,” says Tokyo University Professor and foreign policy expert Ryo Sahashi. But there is very little potential political upside in improving relations for the Japanese leader, especially among conservative voters and lawmakers.

“Diplomacy with South Korea only costs him political capital,” Sahashi told me, “he doesn’t gain anything from it.” Still, Abe seems unlikely to take further steps to provoke a Korean reaction, as happened with the export controls imposed last summer.

Moon, for his part, faces crucial elections to the South Korean National Assembly in April. The possible return to serious tensions in relations with North Korea potentially undermines support for the ruling progressive party which has put North-South Korea engagement at the top of its agenda. A possibly unpopular move to reach a compromise with Japan on the forced laborer issue might be too much of a risk for Moon. But a worsening of relations would also not help Moon, observers believe.

“The upcoming parliament election in April 2020 will be an Armageddon for the government party since it will be a sort of midterm evaluation of the incumbent Moon administration,” observes Yu, a veteran diplomat. “And the worsening of the relationship with Japan would not help before the election unless Japan provokes further in a nasty way. But I think Abe wouldn't do that again. I believe that after the general election next year the Korean government will be more flexible in dealing with Japan.”

Until then, however, Moon continues to be very cautious. He has not embraced the effort to find a compromise solution to the forced laborers problem led by South Korean National Assembly Speaker Moon Hee-sang. Speaker Moon introduced legislation to establish a foundation formed by voluntary contributions from both Korea and Japanese companies, and individuals, to compensate the former laborers.

The proposed fund is modeled on the German Remembrance, Responsibility and Future Foundation, formed in 2000, which paid compensation to all those forced to work in German mines and factories during the war. It was funded by both the German government and by the German firms who used that labor, just as Japanese companies did during the war.

The model is cited by many experts, but the decision of the Moon government to dismantle a similar fund created to compensate the so-called Comfort Women in the 2015 agreement between Japan and South Korea undermines the viability of this proposal.

The new proposal does not yet have the support of those who filed suit in Korean courts, and their lawyers. The Abe administration has also been cautious toward this proposal, even though it does not demand either official Japanese funds or a formal apology to the victims.

“Speaker Moon's idea is not perfect,” notes Tokyo University’s Sahashi. “It would be better if the fund was divided equally between South Korean companies, the South Korean government and Japanese companies. But even this solution would face domestic criticism in both countries. Still, I can’t imagine any other option.”

South Korea’s former foreign minister Yu, who played a key role in setting up the Comfort Women foundation, agrees with this assessment. “Speaker Moon's proposal is not a bad idea at all if it can be passed as a bill in the parliament and Japan is willing to participate in ‘donating’ money to the Fund,” he says.

But Yu worries that the Assembly leader does not yet have sufficient support in the legislature to pass the bill and may have higher priorities, such as passage of an election law and a reform of the prosecution system. “I wonder whether he can spare some of his political assets to push through his idea to resolve the ‘war-time forced labor issue’ once and for all,” he told me.

Behind this lurks the status of the 1965 treaty which normalized diplomatic relations between Japan and South Korea and dealt with the problem of compensation for forced laborers and others through a large transfer of Japanese grants and loans. Those funds were used to finance the industrialization of South Korea, though limited individual compensation was also paid out.

The progressives in South Korea have long challenged the legitimacy of this treaty, arguing it was forced on Korea by the United States and was the creation of a ‘pro-Japanese’ regime led by military leader Park Chung-hee.

The Japanese government continues to insist this issue was settled by the treaty and proposed to deal with the current crisis through a third-party arbitration process set out in that treaty. The Moon government has so far sidestepped whether they still feel bound by the 1965 treaty, carefully avoiding triggering the question of renegotiating the entire treaty.

Even Korean scholars who have been critical of Japan question this ambiguous position taken by the Blue House. The Korean government should clearly communicate through official channels that it will respect the treaty, Professor Chung Jae-jeong, the former head of the Northeast Asia History Foundation, said in a recent interview. “This will facilitate negotiations on how to resolve the current disputes,” Professor Chung said. “I think we as a country have passed a stage where we approach state-to-state conflicts emotionally. They should be handled with professional judgment and knowledge.”

The geopolitics of the Japan-South Korea dispute

The prospects for improvement in Japan-South Korea relations will undoubtedly be affected by the broader geostrategic environment in Northeast Asia. If tensions rise again with North Korea, that may drive Japan and South Korea closer together, though it will not in itself overcome the underlying historical issues.

American policy makers have persistently urged the two countries, both allied to the U.S., to focus on their shared security interests. And that pressure at least yielded some results in the Korean decision to back off from abandoning the defense intelligence sharing agreement. But the forces of nationalism in both countries tend to overwhelm those appeals to joint security interests.

The withdrawal of the U.S. from its traditional leading role as the guarantor of security in Northeast Asia has left Japan and South Korea increasingly on their own in managing out these long-standing tensions. And it has left open the door for China to assert its leadership role, as took place at the trilateral summit in Chengdu. President Moon, speaking at the summit, evoked the “common destiny” binding the three countries together.

“This is a new trial for both countries to explore their own capability to sustain and develop the East Asia order which has long kept the stable environment since the end of World War Two,” comments the senior Japanese foreign affairs journalist.

“In that sense, the trilateral dialogue framework of Sino-ROK-Japan should have more and more implication for the future to come. I have no doubt Japan’s bond with the US will stay firm and solid regardless of whatever chemistry will emerge in the Sino-Korean-Japan relationship. But when it comes to South Korea’s position, frankly, I am much less certain.”