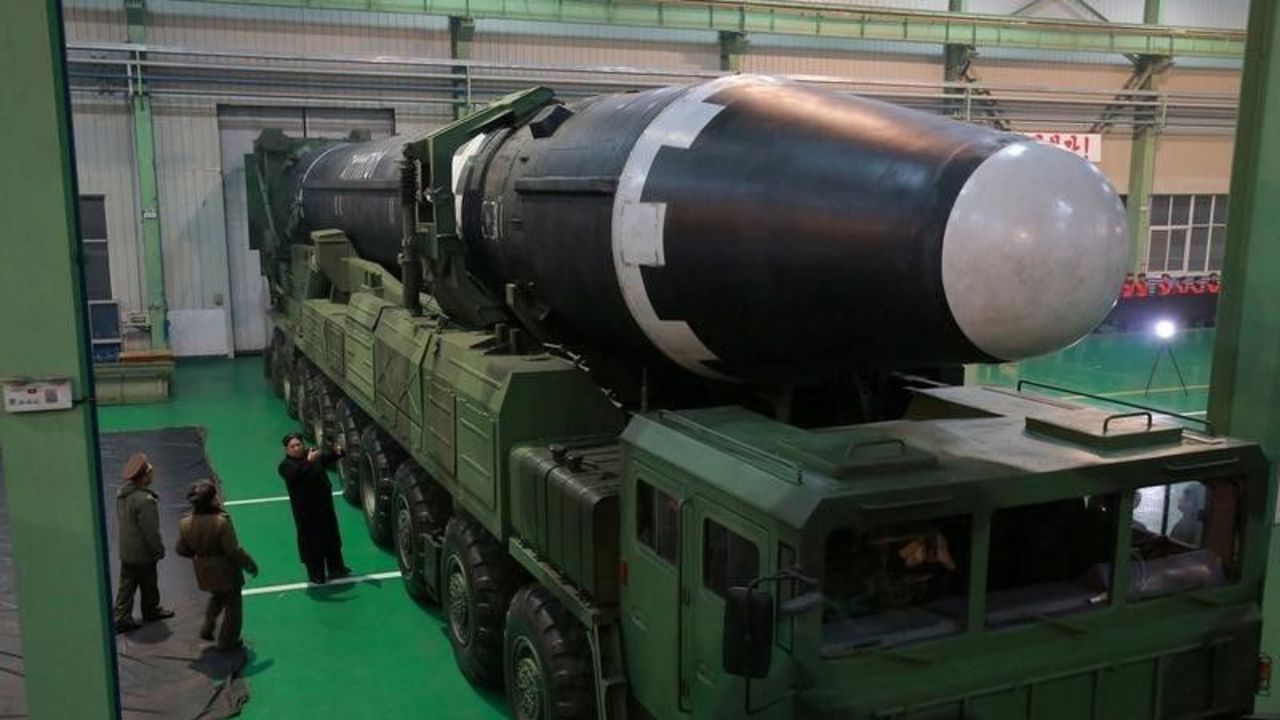 Japanese may well celebrate the New Year with alarm bells on their cell phones, alerting them to a North Korean missile heading their way.

On Saturday, the North Koreans carried out a test of what is most likely a new type of solid fuel engine for long-range ballistic missiles at the Sohae Satellite Launching Station in the western part of the country. That site had been shut down as part of the test freeze announced last year.

There are also some signs of renovation work at a launch site in eastern North Korea which had been dormant since 2009 but used to launch missiles over and toward Japan, says Middlebury Institute for International Studies senior researcher Joshua Pollack.

Most U.S. experts see no evidence of preparation for a resumption of nuclear tests, at least for now. Instead attention is focused on a long-range missile test, perhaps one disguised as a satellite launch.

“I had been inclined to seeing a renewal of space launches as Kim’s best shot at threading the needle - sticking to his April 20, 2018 commitments, and therefore not unduly alarming or offending Beijing - while defying the Security Council and poking Japan in the eye,” he told me. But Pollack thinks the North Koreans may not even bother with that thin cover.

“ICBM testing may be in our near future, perhaps even over Japan into the Pacific,” he said.

The North Koreans, in typical fashion, have already set the stage for precisely this kind of missile test. In a nasty attack on Prime Minister Shinzo Abe, published on November 30, a senior foreign ministry official responded to Abe’s criticism of the test of a multiple launch rocket system with a much more ominous threat. “Abe may see what a real ballistic missile is in the not distant future, and under his nose,” the statement said.

Already, there has been a resumption of the war of words between the North Korean regime and the Trump administration. Hanging over this is a deadline, set by North Korean leader Kim Jong Un last April, of the end of the year to reach a deal with the United States.

The shift in rhetoric from Pyongyang is noticeable. The North Koreans have rolled out a series of statements from senior foreign ministry and military officials, reiterating the end of year deadline and responding with unusual speed to comments from U.S. officials, including the loose talk of President Donald Trump at the NATO meeting.

North Korean Chief of the General Staff, General Pak Jong Chon, warned Trump about “elated spirit and bluffing” leading to war. “The use of armed forces is not the privilege of the U.S. only,” Gen Pak said in a statement released on December 4.

Despite these signs, many analysts interpret the escalating rhetoric and this initial test as a standard North Korean tactic designed to force the U.S. back to the negotiation table. In this view, the North Koreans still want to make the deal they have been seeking since last year -- to lift economic sanctions in exchange for limited steps to cut back their nuclear arms capability.

“Their goal has not changed: they want the Americans back at the negotiation table,” wrote Seoul-based Russian scholar Andrei Lankov in NK News. “They still need a deal that will serve their interests – above all, in regard to sanctions relief. But as they have not been able to find a sufficiently sweet carrot to get what they want, they will stick to the stick for now.”

The North Koreans have reason to believe they can successfully escalate tensions without much risk. “The North Koreans seem confident that the U.S. and ROK (South Korean) non-response to their ballistic missile tests and other recent actions means there is room for Pyongyang to push the envelope of U.S.-ROK tolerance and even toe-up to a U.S. red line,” observes former Principal Deputy Assistant Secretary of State for East Asia and the Pacific, Evans Revere.

“They may well be right, since we currently have two conflict-averse leaders in the Blue House and the White House, both of whom are under some pressure because of upcoming elections.”

The resumption of a robust testing program risks reinvigorating the sanctions regime, which has been eased in the last year and a half.

“At the moment, it is very difficult to see the rekindling of ‘maximum pressure’ but long-range missile testing could resuscitate that effort and that is not in North Korea's interest, particularly since it can already claim a long-range missile capability,” U.S. Naval War College expert Terence Roehrig told me.

“However,” he added, “I'm not sure they see it that way. If the economic situation is sufficiently dire, Pyongyang may believe it has no choice but to roll the dice on this.”

Some long-time analysts of North Korea in the U.S. intelligence community believe, however, that the North Korean leadership made the decision to abandon the negotiations last summer, convinced that there was little hope of getting what they wanted out of Trump. They point to a trail of evidence – mostly in open statements by the regime – of a significant shift in strategy.

At the beginning of the opening of Pyongyang’s peace offensive, in early 2018, Kim had announced that the regime was moving away from the byungjin policy of pursuing parallel goals of economic growth and building military strength, in favor of a shift of resources and focus to a more open, market-driven economy.

The Singapore summit in 2018 seemed to lend credibility to those views, clearly held by Trump himself. But things changed in the aftermath of the failed Hanoi summit in February 2019, where the North Korean bid to exchange lifting of all the major economic sanctions in exchange for vague and limited steps to shut down some of its nuclear facilities fell flat.

In his April 12 speech, which set the year-end deadline for a negotiated deal with the U.S., Kim re-embraced the goals of autarchic economy and a nuclear armed defense. By the late summer, the North Korean regime reasserted the primacy of defense industry. Tests of missile systems, including of a submarine launched missile, resumed with growing frequency.

At the same time, the North Korean regime escalated pressure on the progressive Moon Jae-in government in Seoul to cut ties with Washington, demanding an end to even minor joint military exercises planned with the U.S.

The decision to effectively end negotiations appears to have been made sometime in the summer, a long-time former senior U.S. intelligence analyst believes. Kim agreed to hold working level talks after a hastily organized meeting with Trump at the Demilitarized Zone in Panmunjom in June but those talks did not convene until early October, in Stockholm. The talks lasted only one day, with the North Koreans issuing a lengthy statement at the end of the day denouncing the U.S. for failing to move from “its old stance and attitude.”

Some U.S. and South Korean commentators leaped to echo this statement, blaming the U.S. for refusing to shift away from its demand for major steps by the North Koreans before giving any sanctions relief. But U.S. negotiators led by envoy Steve Biegun insist that they in fact had offered new ideas to ease sanctions and offered a phased approach.

Instead there is evidence that the North Koreans never had any intention to engage in serious negotiations. According to two former U.S. intelligence officers who have been in close touch with Amb Biegun and his team, the North Korea delegation arrived at the talks with their full statement already in hand.

The North Koreans also insisted that the talks last no longer than one day. Both are taken as evidence that the North Koreans never intended to grapple with the substance of a possible agreement to be discussed at a summit. Any previous serious talks have always taken at least two days, to allow for consultation with the leadership, even talks held in Pyongyang.

The door to a third major summit with Trump remains slightly open – the North Koreans are still careful not to attack him personally and are said to seek a Trump visit to Pyongyang. That would be an enticing prospect for Kim, but there is no indication of Trump’s readiness to take such a political risk.

The clearest sign that Pyongyang is no longer waiting on Trump came with a rare announcement this past week by the Workers Party of Korea (WPK) Central Committee Politburo Presidium (the inner core of the leadership) to convene a Party Plenum in the last 10 days of December.

The plenum, the announcement said, will “discuss and decide on important issues in line with the demands of the changed internal and external situations,” a formula that hints they have concluded already that the U.S. will not “withdraw its hostile policy.”

The announcement was accompanied by a propaganda show in the form of photos and videos of Kim, astride a white horse, accompanied by his wife, senior party leaders and key military commanders, all following on horseback, visiting the sacred site of Mt Paektu, the symbol of the birth of the regime.

That visit, the second in the last two months, was preceded by a visit to a showcase tourist complex near the Chinese border, intended to attract a growing flow of Chinese tourists. This is now the path for regime survival – self-reliance, with key Chinese support, and emphasis on a toughened militarized regime.

“The announcement of the plan for the plenum later this month, along with the unusually long report of Kim’s latest appearance on Paektu (accompanied by corp commanders) means we won’t have to wait long to see what’s in store,” a former senior intelligence community expert told me earlier this past week, anticipating the Saturday test.

“There are still three weeks left in December for Washington to head off Kim’s deadline, but scheduling the plenum suggests Kim has already made up his mind and isn’t going to wait.”

Work-Life Balance While Parenting In Place