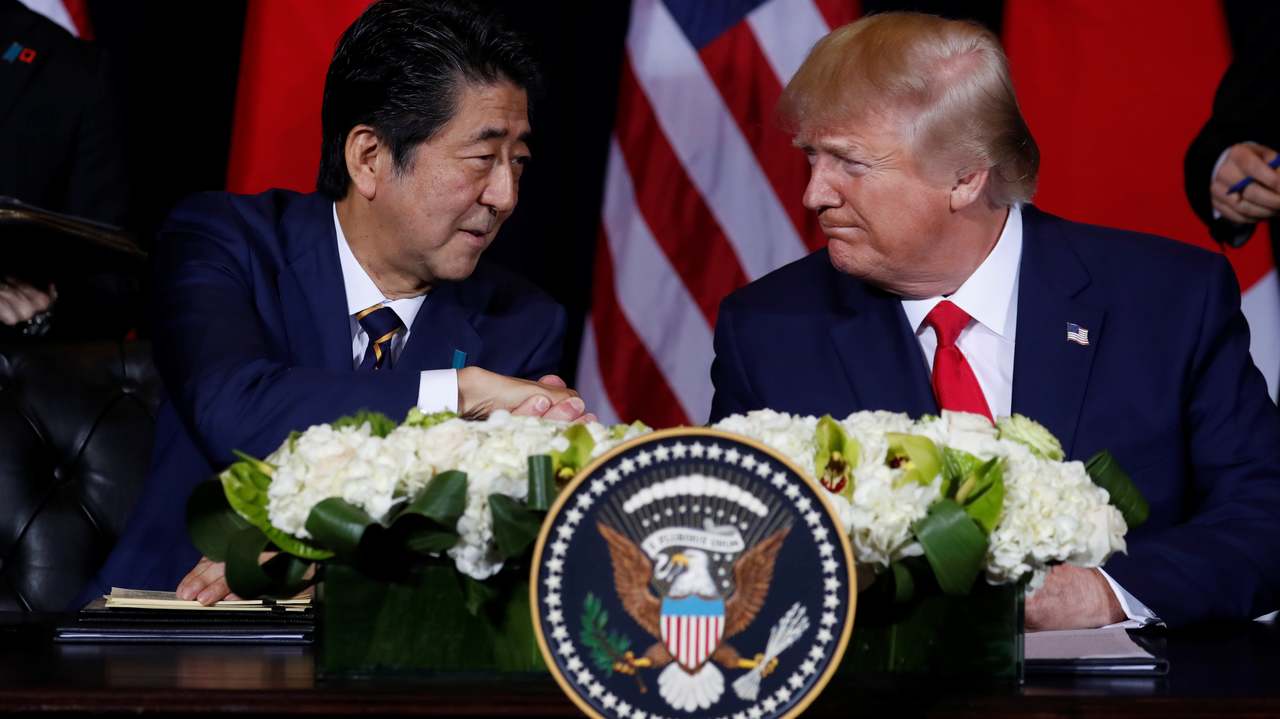 Did Abe Shinzo just join the Trump re-election campaign? That is the question that jumped into my mind after watching the meeting between Abe and Trump in New York and reading the agreement on trade that they announced.

Prime Minister Abe told Japanese reporters that this was a “win-win” for Japan. But trade policy experts in the U.S. see this more as a win for the American president, and more precisely, a boost to his re-election campaign.

“This will relieve some political pressure on Trump going into an election year,” Matt Goodman of the Center for International and Strategic Studies commented. “While the economic gains outside of the agricultural sector are limited, Trump will tout the agreement—his first and only new bilateral deal—as a major victory and a validation of his hard-charging approach to trade.”

Japanese negotiators working under Foreign Minister Motegi Toshimitsu had taken a very tough position going into these talks. They knew that the U.S. was desperately seeking an agreement by Japan to give the U.S. the same levels of agricultural market access and tariff reduction already granted to the European Union and to the members of the Trans-Pacific Partnership (TPP-11). This was a concession they were more than ready to give, since they had already negotiated the same thing with the Obama administration.

Instead the deal signed in New York gives all the agricultural concessions up front – with legislation to be signed in an extraordinary session of the Diet. The auto issues and other key trade issues are to be dealt with down the road, in ongoing negotiations with no clear time table.

In exchange, Japan got a pledge not to take action that would “counter the spirit” of the deal while negotiations continue and these deals are being implemented. This is similar to the pledge they got in the joint statement issued in September 2018, a year ago, which did not stop preparations for a 232 claim.

Senior Japanese officials told me that they consider this an “adequate guarantee” and that Trump confirmed that this means no 232 tariffs in his private meeting with Abe. Motegi told Japanese reporters that they understand this pledge to be in place while the agreements are being implemented, which could suggest an extended period of time. “What we’ve got is as far as we could get,” a senior Japanese negotiator told me.

Teneo Japan specialist Tobias Harris basically shares that view. “As with the joint statement from a year ago that launched negotiations, this agreement may be another example of Abe’s buying time and managing a less-than-optimal situation,” he wrote.

But other American trade experts are more skeptical.

“It is hard to see how Tokyo can portray this as a win-win,” Mireya Solis of the Brookings Institution told me. “The auto sector is excluded, and President Trump is not going to consider himself warned that further tariff threats could cost him the preferential terms of access to the Japanese agricultural market. From what I have seen so far, I see a potential problem with the very vague promise in the statement. Because autos are not part of the agreements, then Trump will likely not consider his 232 tariff actions to violate their spirit. Hence, no assurance and the risks persist.”

Indeed, Trump and his senior officials are much more limited in their description of the agreement. “At this point, it is certainly not our intention, the president’s intention, to do anything on autos, on 232s, on Japan,” chief US trade negotiator Robert Lighthizer said.

In all his remarks in New York, Trump never said anything about this pledge or the 232 issue at all. If it is on his mind, he didn’t show it. More crucially, as the negotiations continue, the Japanese side has given up the most effective weapon they had to keep Trump honest.

“While in NY, we do not highlight what we managed to get (or what we avoided) in the agreement lest such a press report should lead to an unpredictable emotional reaction from the President.”

Earlier in the week, the New York Times, Washington Post and others reported that the talks had stalled over the American refusal to give a clear pledge on the auto tariff issue. They reported that the Japanese side tried to find a way around this problem by proposing adoption of a “sunset clause” or as some call it, a “snap back agreement.”

This would provide for suspending or removing the agricultural tariff concessions if the U.S. went ahead and imposed the auto tariffs.

There is no hint of any discussion, much less agreement, along these lines in the documents issued in New York – not in the joint statement, nor in any of the American background documents, none of which even mention autos. Japanese officials still hold this in reserve however.

“Should 232 tariffs be imposed, we will perhaps terminate the agreement,” the senior Japanese negotiator told me. But there is some question, according to Japanese trade policy experts, whether such a step would be legal under Japanese law. If the Diet passes this agreement, can it be easily suspended or reversed?

The President and his special friend

The President was absolutely clear, however, about what he wanted to be conveyed to the American public out of this meeting in New York. The White House and USTR were telling American reporters in detail all the agricultural concessions they were getting from Japan.

“Under this first-stage initial tariff agreement, Japan will eliminate or reduce tariffs on an additional $7.2 billion of U.S. food and agricultural products,” as USTR fact sheet declared. “Over 90 percent of U.S. food and agricultural imports into Japan will either be duty free or receive preferential tariff access once the Agreement is implemented.”

The political implications of this for Trump’s campaign are obvious – he is facing serious loss of support among farmers who have been heavily hit by the tariff wars with China, wars that show no sign of stopping soon. This agreement was heavily coordinated with agribusiness lobbies in the U.S. that support Trump. Literally within minutes of the announcement, reporters from the Wall Street Journal and other papers got a half dozen press releases from corn, wheat and other trade groups praising this great “victory.”

Just to reinforce the point, the President staged a TV show spectacle with Abe present with representatives of these groups and called on them to give testimony to what a great deal this would be for their members. “Japan is going to be special,” Trump concluded, “and this is my special friend,” nodding to Abe.

Ironically perhaps, this display of affection and Abe’s lending himself to Trump’s political ends comes just when the President is under massive scrutiny for his efforts to pressure Ukraine to provide dirt to use against Democratic party presidential front-running Joe Biden. Japanese reporters accompanying the Prime Minister to New York seemed almost oblivious to the fact that this was going on while Abe was meeting Trump.

“Right in the middle of the biggest American political/constitutional crisis since Nixon (and perhaps ever given the magnitude of Trumps daily outrageous behavior), Abe comes along and once again sucks up to Trump?” a long time American Japan hand said.

“Reaching a bilateral trade agreement may be a good thing, but the optics are absolutely awful. To be sure, as the trade deal was being wrapped up, the Japanese could not have known that Trump was about to experience yet another huge scandal. But I am getting really tired of Japan's effort to placate/please/flatter Trump. They just do not get how unappealing their policies are in the eyes of the world.”