Kids with Plastic: How Parents are Arming Kids with Credit Cards 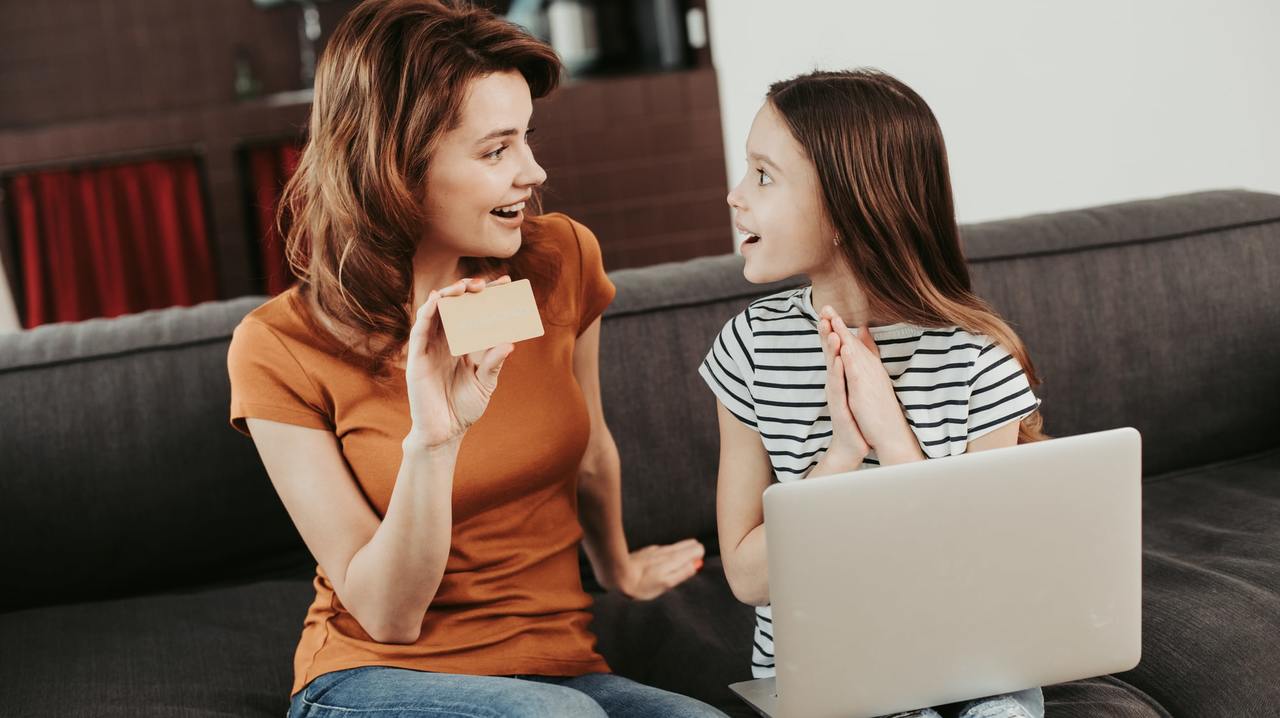 It was an odd scene. A 7-year-old boy walked into a local bakery determined to buy pastries. Before purchasing he announced that he would be paying with his “mother’s friend’s credit card.” All the adults in the store quietly gasped. The owner gently explained that he wouldn’t be able to spend in this way. With a shrug, the boy raced out of the bakery.

Apparently this is a growing trend.

The New York Post had a piece about pre-teens and teens getting credit cards and flashing this plastic in upscale environments. They highlighted a 14-year-old girl, Rebecca Reich, who swipes her Chase Visa card daily in taxis to and from school.

She and her friends eat dinner at high-end restaurants like Nobu, leading one East Side mom, Tracy Jackson, to remark, “I know of parents who hand over the Black Amex to kids of all ages, and there are no rules or limits imposed.” She continued, “In New York, it’s not unusual to find a 14-year-old picking up the $2,000 tab for a dinner for 10 friends.”

Kids with plastic is on the rise. According to a 2017 Parents, Kids & Money survey conducted by T. Rowe Price, the number of kids ages 8 to 14 with credit cards has quadrupled in just 5 years. In 2018 kids ages 13 and 14 who now carry credit cards has more than doubled.

“In a world that is becoming increasingly more digital, kids need to know less about how to cash a check and more about how credit cards work,” said Stuart Ritter, a former senior financial planner at T. Rowe Price. His view is that letting kids use credit cards can be a useful way for them to learn about modern money exchange.

“How would an 8 or 14-year-old pay for their own credit card?” she asked. “Do they get their own bill? A credit card is going to antagonize debt and bad money habits.”

Roehm has explained to her kids that a credit card is not their money. She defines it as “bad money” because you have to pay it back plus interest. Instead, she’s encouraged them to use their own money and if they don’t have it, to wait until they do. For this reason she’s a proponent of debit cards as a better first step.

“I think the future will be cashless,” she said.

Roehm asserts that a debit card could teach kids how to manage money in a cashless world. Future transactions would entail a person walking into a store and having items automatically charged – like the Amazon store which relies on computer vision technology. Due to this cashless future, she said that parents can’t ignore the need for responsible plastic use for their children.

“I let my kids use my debit card,” she said. “I want them to learn how to use money and how to communicate while using it.”

Roehm allowed her daughter to go into a store alone and use her debit card by inserting the PIN code she’d given her. She was 10. Now her 9-year-old son can scan groceries by himself and pay for the goods using the same debit card. For Roehm, this teaches her kids to be independent and comfortable transacting with cards.

Stacey Thoreau has seen this independence first hand. As the owner of the bakery previously mentioned, she views her store as a safe haven for kids to walk over and have a taste of self-government. For them to experience “purchasing power of their own.”

Thoreau said that most of the cards have their parent’s or grandparent’s names on them but it was difficult to tell if they were credit or debit cards. For her, it would be surprising if these were credit cards.

“I remember there was a time when you had to earn credit,” she said. “They didn’t give it to you by default.”

Thoreau said that most of the kids transacting with cards are between the ages of 8 and 12. But she has seen kids as young as 7-years-old buying pastries with a credit card. She recalled the young boy who came with his “mother’s friend’s credit card.”

“I was pretty shocked,” she said. “I didn’t know where he got that credit card.”

Her theory was that his mom and her friend were talking and felt too lazy to come in and transact on the card. Thankfully, she said that doesn’t happen very often. But she has been taken aback by 11 or 12-year-olds coming in using their own credit or debit cards.

“I don’t know how anybody equates money with credit cards,” she said. “Where is this money coming from?”

Thoreau acknowledged that as an adult her kids have seen her “whip out “a debit or credit card to pay for things. She’s often wondered what kind of message that was sending because she strongly believes that kids have to be taught how to handle money.

Her philosophy is that if they can “learn to make it before they spend it, and spend it on important things first,” they’ll be fine. But she said that parents who give plastic to kids have the attitude of: this isn’t a lot. That’s why they feel comfortable handing over their cards.

Thoreau’s 14-year-old daughter and 17-year-old-son both don’t have debit cards.

“Why? Because they don’t have any money.”

Instead, she’s been saving their earned income in their bank accounts. Thoreau does see the necessity of giving her kids debit cards with minimal funds and teaching them how to manage it.

“Paychecks are going right into bank accounts and are being taken right out of those accounts,” she said. “They’re growing up in a world where they’re never going to see their money anyway.”
Thoreau’s son believed that in the future, people would be micro-chipped where physical transactions would no longer be required.

Audrey Guskey, professor of marketing at Duquesne University in Pittsburg, sees this early card usage as a necessity.

“More and more we are a cashless society,” she told creditcards.com. “Even retailers find cash inconvenient, so credit cards are becoming a practicality issue. Young people need to have plastic.”

And banks are encouraging this.

“Let’s not forget that the first card you have is the one you’ll stick with for years and maybe forever,” said Guskey. “Little kids having cards is thrilling news for credit card companies.”

One of the biggest reasons why there’s support for giving kids credit cards is to build credit.

“It makes buying a home and getting an apartment a lot easier,” said financial planner Kevin L. Matthews to moneyunder30.com. “Imagine starting adulthood with an 800+ credit score.”

Parents with a strong credit record who choose to add their child as an authorized user may be setting up their kids for a robust credit history.

This is what Roehm’s parents did for her. Unbeknownst to her, her dad had signed her up for his joint credit card at age 8. Her parents didn’t give it to her until she was going to Europe when she was 21. She was only to use it in emergencies and had to pay for her transactions. This gave her good credit.

“So when I went to buy a house they said, you’ve had this credit card for 20 plus years.”

For this reason she’ll get a credit card for her kids right before college when she can still help them navigate their bills.

Jade Morelli supports this early financial education. As a former barrister at a popular coffee chain, she’s seen kids purchasing cookies, Italian sodas, hot chocolates, mochas and even a latte by a 9 or 10-year-old boy with a debit or credit card.

“I had first or second graders use it,” she said. “I was a little surprised but they wielded it so confidently and explained that it was their friend’s mom’s card, so I didn’t interrogate.”

Perhaps it was the same boy from the bakery….

What Morelli noted was that kids with plastic understood that they had to “give something to get something.” These kids were prepared to offer the card in exchange for a plate of cookies or a glass of sweet beverage. Morelli saw the disadvantage. The kids had access to a wide variety of options without the tactile understanding of money’s value.

“With the card, money was rarely gone,” she said. “It was just empty and would be refilled.”

There wasn’t a clear correlation with where the money came from and how it got to the card. This was not how Morelli, a millennial, was raised.

She recalls having a talk with her dad about the value of a dollar around age 9 or 10. Morelli’s dad had discussions with her and her younger sister about how a mortgage works, the danger of credit card interest and “who owns the house as it’s being paid off.”

This was before the age of 12. By understanding the value of cash, loans, interest, etc. their parents helped them open bank accounts and get debit cards by depositing monies earned from babysitting and craft sales. They were never given a credit card.

“Cashless systems are common and to learn to work within them is important.”

For this reason, Morelli said that cash cards attached to an account seemed a more realistic way to teach kids the value of money. The kid should have some sort of access or control over the account. This was a healthier way to teach sound fiscal habits, as opposed to the use of credit cards.

Credit card balances carried month to month reached $420.22 billion in late 2018, according to NerdWallet’s annual analysis of US household debt. With such staggering figures it seems wise to question if kids with plastic will alter this trend.

“Avoid credit cards,” he said. “Just forget about them.”