Negotiating With North Korea – Two Roads That May Not Meet 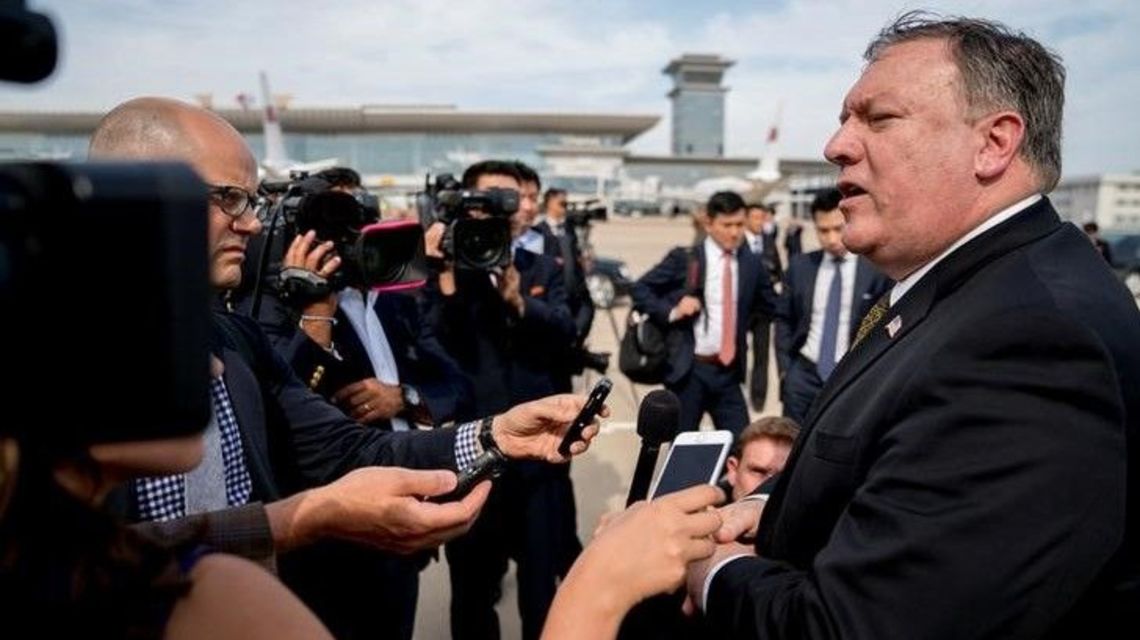 (Photo by Andrew Harnik/Pool via Reuters)

“We made progress,” U.S. Secretary of State Mike Pompeo declared from a stage in Tokyo last week. Pompeo arrived after two days of talks in Pyongyang, and reassured his Japanese and South Korean counterparts that there were “detailed and substantive discussions about the next steps toward fully verified and complete denuclearization” of North Korea.

Only hours before these soothing words were spoken, however, the North Korean Foreign Ministry issued a detailed statement on the talks, dismissing any talk of progress. Instead the North Koreans accused the U.S. of seeking to backtrack from the agreements reached in Singapore the previous month between Kim Jong Un and Donald Trump.

Who is telling the truth here? “The North Koreans are being way more transparent than the administration,” says Ambassador Joseph Yun, who served as the U.S. special envoy on North Korea until he left the administration earlier this year. “If I were Pompeo, I would not feel good about the statement.”

Many analysts point to the clear gap, exposed yet again in the dueling statements after last week’s meeting, between what Pyongyang and Washington mean when they use the word “denuclearization.” But there is another more significant problem that emerged more clearly from the latest meeting – there are in fact two negotiations that have taken place between the U.S. and North Korea.

One has been carried out by the professionals inside the administration, officials from the State and Defense departments, the Central Intelligence Agency and the National Security Council. Then there is the negotiation conducted by President Trump. Pompeo is the only, rather tenuous and very politicized, bridge between these two very separate talks.

“The national security bureaucracy is doing what they always do,” says former senior State Department official and veteran North Korea negotiator Evans Revere, “preparing papers, holding meetings, reassuring allies. But that has little to no connection to the national security decision making process.”

This disconnect existed from the beginning of the preparations for the Singapore Summit. According to one of the senior officials involved in those preparations, four or five committees were set up to prepare for the talks, covering issues such as nuclear weapons, verification, sanctions and the negotiating strategy for a joint statement to be issued by the two leaders. But a month before the summit, those preparations were not hooked up to the President.

The national security bureaucrats were rightly afraid of what Trump might do on his own. Their goal was to get a broad statement of principles, mainly aimed at a clear commitment to “CVID,” complete, verifiable and irreversible denuclearization, with a focus on verification, that would then allow the bureaucrats to carry out actual negotiations. “We are trying to get this into a process beyond the summit,” one participant told me. “We don’t want Trump to be the action officer, the negotiator.”

This effort to contain the President ultimately failed. The pre-summit talks with the North Koreans went through two channels. The more significant one was set up by the CIA and run by the head of its Korea Mission Center, Andrew Kim, a Korean-speaking Korean American who once headed the CIA’s station in Seoul.

That was the channel used by Pompeo to carry out two meetings with Kim Jong Un in Pyongyang and then to bring North Korean intelligence boss Kim Yong Chol to New York and thence to the White House to seal the deal for the summit.

The second set of talks was carried out by a team of State, Defense, CIA and NSC officials, led by Sung Kim, a former ambassador to Seoul and the chief North Korea negotiator under Obama, and including Defense Department’s Randy Schriver and Allison Hooker from the NSC. Those officials, who met with their North Korean counterparts in Panmunjon for a week before the summit, and then moved to Singapore, were drafting the joint statement.

The Pompeo-CIA channel spent most of its effort on reaching an agreement with Kim on where to hold the summit – the North Korean leader insisted up until the end on having the meeting in Pyongyang. The other channel devoted itself to real substance but they were undercut at every turn, restrained by a President bent on having his summit spectacle.

Pompeo’s meetings with Kim Jong Un were dominated by negotiations on the locale and optics of the meeting rather than their content. When spy chief Kim Yong Chol came to the U.S., he emphasized the need for a gesture from the U.S. that it was willing to improve relations with North Korea, comparable in their view to the moratorium on testing of missiles and nuclear weapons already declared by the North.

According to a participant, Kim focused on the issuance of a declaration to end the state of war on the Korean peninsula, which he called the first step toward creation of a so-called peace regime. This desire is shared by the South Korea government, and was a central part of the joint declaration issued by the two Korean leaders in late April.

The North Korean intelligence chief told Trump that this would the crucial sign that the U.S. was willing to enter into a different relationship with them. The President responded that if that is symbolically important to the North, it was fine with him. A more formal peace treaty between the North and South, joined by China, could follow.

At Singapore, the plan to issue an end of the war declaration apparently faltered for reasons that are not entirely clear. Previous U.S. administrations have supported the goal of creating a lasting peace on the Peninsula including the signing of a peace treaty to replace the armistice agreement.

But they have always insisted that denuclearization precede that step, worrying that by starting with a peace agreement it would effectively lock in the status of North Korea as a nuclear power and increase North Korean and other pressures for the early withdrawal of U.S. military forces from South Korea.

The Singapore statement did commit the two governments, however, to “join their efforts to build a lasting and stable peace regime on the Korean peninsula” and endorsed the North-South declaration. And Trump came out of the meeting to announce the suspension of U.S.-South Korean combined military exercises, a clear down payment on the end of war declaration. That announcement caught the national security bureaucrats completely by surprise, including the Defense Department and the U.S. military command in South Korea.

When Pompeo and his team went to Pyongyang last week, they tried to move straight to getting Pyongyang to agree to specific new denuclearization steps.

The North Koreans, according to their statement, would have none of that. Their agenda of implementation began with “making public a declaration on the end of the war first,” to be done on July 27th of this year, the 65th anniversary of the signing of the armistice to end the Korean war in 1953. That was to be combined with two other steps: dismantling an ICBM engine test site and the return of the remains of American soldiers lost in the Korean war.

“The U.S. side never mentioned the issue of establishing a peace regime on the Korean peninsula which is essential for defusing tension and preventing a war,” the North Korean foreign ministry complained.

Denouncing the effort to focus talks solely on denuclearization, the North Koreans then appealed directly to Trump to return to the Singapore deal, as they understood it. “We still cherish our good faith in President Trump,” they concluded.

The national security bureaucrats are attempting to carry out the mandate to end the North’s nuclear program. They have apparently sought to link substantial progress toward that goal to the end-of-the-war declaration. This seems to be a bridge too far for Pyongyang, observes former senior official Yun. “Trump says stuff and the North Koreans believe it,” says Yun. “When Pompeo comes, they say, ‘that’s not what your President said.’”

The national security bureaucrats will keep trying to actually negotiate the deal they believe is on the table. They met the North Koreans this week to discuss return of MIA remains and will begin working level talks on other issues. Meanwhile, the President, based on his latest twitter pronouncements, believes he has a “contract” with North Korean leader Kim Jong Un, sealed by a “handshake.”

At some point, the disconnect between the two negotiations will become impossible to deny, much less avoid. But that point may be months away – for Trump, after the midterm elections in November would be best. For Pyongyang, the goal is now to turn to its talks with South Korea, backed by China, and further undermine economic sanctions against it. When and if the talks reach an end point, it will be almost impossible to reimpose pressure on the North through a combination of economic blockade and the threat of war.

“We can’t get close to the brink of war because Moon Jae-in remains president of South Korea for four more years,” says former State Department official and Korea expert David Straub. “If we were actually going to go to war, South Korea would dig in. Trump would have to back down, or he could say, okay have it your way, the alliance is over.”

That is a prospect that worries Japan and other allies, and rightly so.