History In Singapore--Made Or Remade? 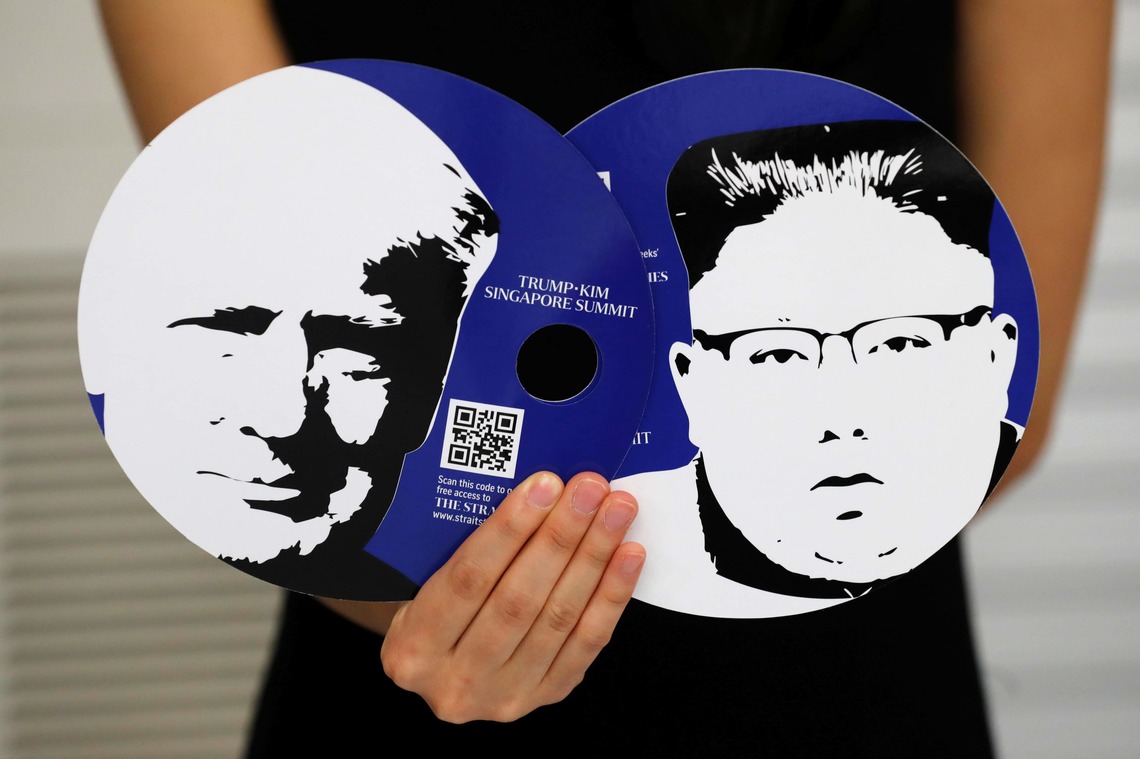 As he headed off to Singapore, President Donald Trump boasted to reporters that “this has never been done before.” History, however, is not being made in Singapore – it is being remade.

Ironically, the person that Donald Trump most needed to consult before embarking on this venture is Bill Clinton. The current engagement with North Korea is closely following the script of the final months of the Clinton administration.

The language and approach of Kim Jong Un mirrors that of his father, Kim Jong Il, when he hosted Clinton in Pyongyang in August 2009. It is doubtful that anyone has dared to brief Trump on what happened – but a brief recap may offer some lessons.

The U.S. and North Korea signed the Agreed Framework to freeze North Korea’s nuclear program in the early years of the Clinton administration, in 1994. But by 1998, the deal was unraveling. U.S. intelligence believed it had found satellite evidence that North Korea was building a secret nuclear reactor and reprocessing facility at a site called Kumchang-ri. On August 31 of that year, North Korea conducted a long-range missile test over Japan, claiming it was a failed satellite launch, triggering regional fears of war.

Amidst a gathering crisis, South Korean leader Kim Dae Jung, a progressive advocate of engagement with the North, held the first summit with his North Korean counterpart in June, 2000, a landmark commitment to eventual reunification and peace on the peninsula.

In early October 2000, Kim Jong Il sent his righthand man, Marshal Jo Myong Nok, to visit the White House, where he met Clinton and delivered a letter from Kim. Jo was desperate to get Clinton to agree to come to Pyongyang.

In a joint statement, the two sides talked about better relations which “would benefit both nations in the 21st century while helping ensure peace and security on the Korean Peninsula and in the Asia-Pacific region.”

They disavowed any “hostile intent toward the other” and committed to build a relationship “free from past enmity” including economic cooperation. And crucially, they agreed to a trip by Secretary of State Madeleine Albright to Pyongyang to prepare for a possible visit by Clinton.

Albright met in late October with Kim, the talks taking place in a cordial atmosphere, with dinner table chat about computers and Kim’s well-known passion for movies, and admissions that his country was in “dire straits” economically and eager for help. Substantively, Kim signaled his readiness to limit the production and sale of missiles and to impose a moratorium on testing.

As a surprise, Kim insisted Albright join him that evening at a stadium where tens of thousands of disciplined North Koreans engaged in mass synchronized displays of propaganda images. As a depiction of a missile launch went up across the stadium, Kim leaned over to Albright and quipped – “That was our first missile launch – and our last.”

The planned visit by Clinton to follow never took place, aborted in part due to the end of his administration and his decision to focus on a possible Mideast peace deal. But it also faltered when nuclear and arms negotiator Robert Einhorn failed to get a clear commitment to a missile ban during a week of talks with North Korean negotiators in Southeast Asia.

“North Korea refused to provide any further details to Einhorn,” recalls David Straub, a former senior State Department official and Korea expert. “They told him, we can’t comment on what the Supreme Leader has said but trust us, the Dear Leader will take care of your president when he comes to Pyongyang.”

Clinton finally made it to Pyongyang in August of 2009. He came as the former President of the United States, but one whose wife was the Secretary of State of a newly installed Democratic administration. He led a secret mission to free two American journalists – Laura Ling and Euna Lee – who had been seized along the China border and imprisoned by the regime.

The North Koreans had turned down the offer of other high-level envoys, including former Vice President Al Gore, who co-chaired the media outlet the women worked for, insisting that only Clinton would do. He came amidst tension with the new Obama administration – Pyongyang had spurned offers to talk and tested long range missiles and a nuclear warhead in the spring.

For Kim, the goal was the legitimization he had sought, and failed to secure, of an American president at his feet. In a photo that the North Koreans eagerly released after the visit, Clinton sits stiff in a chair, unsmiling, next to Kim, the American delegation arrayed behind them.

“The North Koreans value the photograph of their leaders with such kowtowing Americans, showing their elite and their ordinary citizens that they are able to force the Americans to bend to their will,” says Straub, who accompanied Clinton to Pyongyang.

Having used the hostages to bring Clinton to his side, Kim embarked on a charm offensive, of sorts. He began by praising Clinton for coming “during a time of high tensions between their two countries,” according to a memo on the meetings prepared by Straub, and later released on Wikileaks as a result of the hacking of Clinton’s aide John Podesta.

Kim waxed nostalgic about their missed moment for a meeting. North Korea, he offered without irony, had generously decided to consider the U.S. request to pardon the two imprisoned journalists for the sake of “better relations and the elimination of mistrust between the two countries.”

Kim went on to blame Bush and “neo-conservatives” for relations going sour. But he complained that while Obama came into office claiming to be willing to reengage, he was “obstructing” their “right to send satellites into orbit.”

North Korea is a small country surrounded by giants, one that suffered colonial occupation and had a “strong sense of national pride” he explained. The U.S. is not their enemy – in fact they wanted a strategic relationship with it.

“If the bilateral relationship developed for the better and if a world free of nuclear weapons were realized, as President Obama advocated,” Kim told Clinton, “a denuclearized Korean Peninsula would be realized and many Northeast Asian issues could be addressed.”

Kim dangled a potential gift to Obama – if he was sincere and constructive -- the promise of a restored moratorium on missile tests. Clinton responded, carefully, thanking Kim for the release of the prisoners, assuring him that the Obama administration did not take a hostile approach or seek to threaten the regime. He urged Kim to respond to their offers to meet and talk.

In an elaborate dinner that followed, with over a dozen courses of food and drink including a thick American style steak, Kim did not bother with more talk about missiles and nuclear weapons. Instead he repeatedly tried to get Clinton to go with him to another performance of the mass games – Clinton however had been forewarned not to let that happen. He praised the steak and stood up Kim.

Later, said Straub, the Americans found out that the Games were not even scheduled but that some 100,000 people had been brought in solely to perform for Clinton, and then sent home.

“The North Korean leadership wants legitimization but they want it almost entirely on their terms, and that has not changed,” says Straub. Indeed, based on accounts of the negotiations from senior officials made available to this author, the same playbook is being used by his son.

As we saw in leadup to the talks in 2000, North Korea gleefully raised tensions last year with long-range missile tests and the explosion of a massive nuclear warhead. Efforts to open talks were turned aside, other than State Department contacts to secure the release of an imprisoned American student on the verge of death.

In January of this year, Kim Jong Un signaled that he was ready to pivot to talks. Administration officials claim the shift came under the squeeze of economic sanctions joined by China and in response to threats of military action. But privately, senior officials admit that they had anticipated this shift as a calculated opening from Pyongyang.

As in 2000, a progressive South Korean government, now led by Moon Jae-in, stepped in to open the door to engagement, beginning with the Winter Olympics and leading to the dispatch of a senior South Korean delegation to Pyongyang to meet with Kim and his aides in early March, aimed at setting up the Moon-Kim summit in late April.

The South Koreans came to Washington, carrying a four-part message from Pyongyang. Kim was ready to declare a moratorium on missile and nuclear testing; he was ready to accept planned U.S.-South Korean joint military exercises; Kim wanted to meet Trump and he was prepared to embrace the goal of denuclearization.

Trump, to surprise of even his own aides, jumped to agree to a meeting. The next day a message was sent through a secret CIA channel proposing a meeting to independently confirm what the South Koreans had told them. At a meeting in a third country, the North Koreans said they could confirm three of these things but only Kim Jong Un could talk about denuclearization and proposed a visit to Pyongyang.

CIA Director Pompeo, accompanied by senior Korea intelligence head Andrew Kim, went to Pyongyang on April 1. The North Korean leader declared in broad terms his commitment to denuclearization of the Korean Peninsula but avoided any detailed discussion of how that might take place. He put release of the detainees on the table but the main thing on his mind was to insist that a summit take place in Pyongyang.

Pompeo proposed a summit in the U.S. It took three separate meetings with Kim, including a second Pompeo visit, when the detainees were finally released, to get agreement on a third country locale – Singapore.

When Pompeo returned with the three prisoners, the mood at the White House and the CIA was celebratory. Even the momentary drama of Trump’s letter cancelling the summit, a gambit to rattle Kim, lasted only a day. The visit of the CIA’s main interlocutor, North Korean spy boss Kim Yong Chol, giant letter in hand, an echo of Marshal Jo’s White House visit, sealed the summit deal.

Meanwhile, negotiations on a joint statement that would spell out the denuclearization pledge have been slow going. Beginning in Panmunjon and shifting to Singapore, a small team of professional negotiators from the State and Defense Departments are trying to reach agreement on a broad statement of principles that leads to a process of serious diplomacy beyond the summit. They are pushing for an early gesture in the form of an agreement on verification of North Korean nuclear and missile programs.

Trump has embraced the idea of a “process” including more meetings with Kim. For Kim, who compromised on the Singapore setting, the goal is still to get the American president to Pyongyang. For Kim, that will finally certify acceptance by the United States of North Korea as a legitimate nuclear-armed power, under the perpetual rule of the Kim dynasty.

After his visit to Pyongyang in 2009, Bill Clinton returned with hostages in hand and a process of negotiation ensued. It ended in a February 2012 agreement with newly installed Kim Jong Un to freeze missile tests and uranium enrichment and return international inspectors to the North Korean nuclear facility, in exchange for food aid and a return to 6-party talks. That deal lasted mere weeks, after Pyongyang carried out a satellite launch in April.

Will that be the fate of a Singapore deal? Trump and his aides have decided to ignore history, confident that this time, everything is different. “The North Koreans never forget,” retorts Straub, “and we never learn anything.”