Abe's Moment Of Truth: Can Japan Say No To Trump? 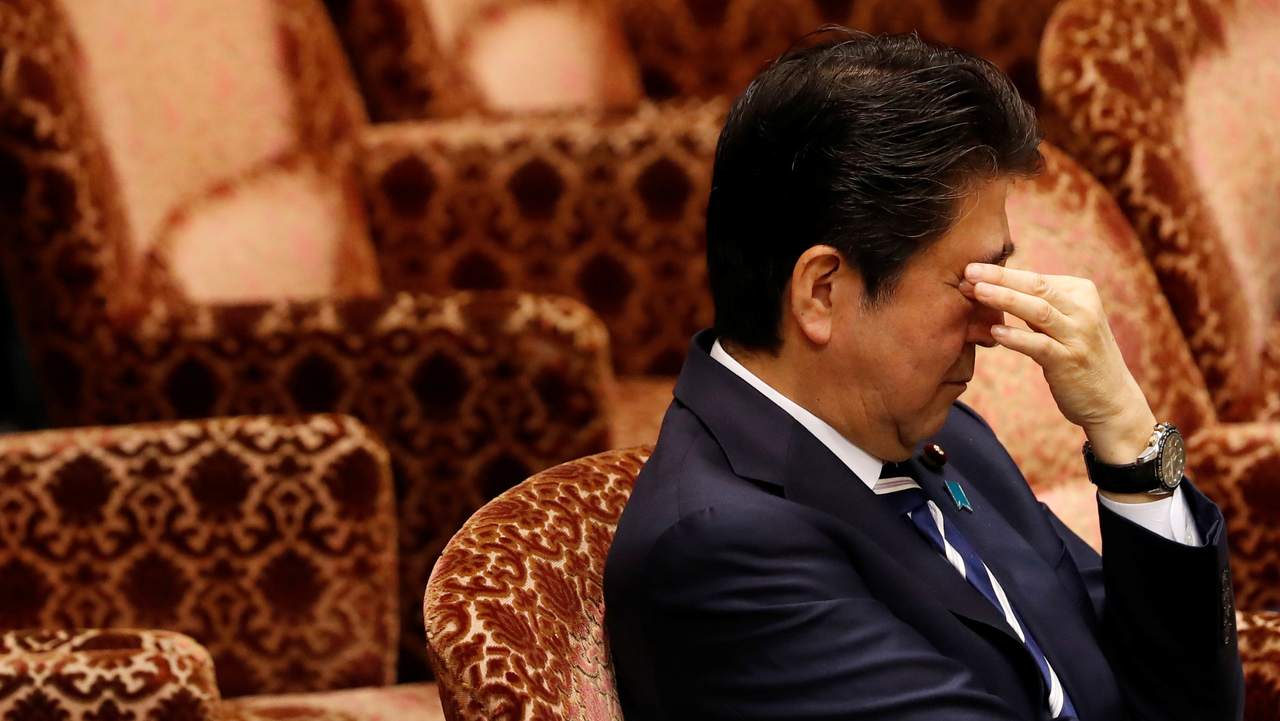 For a year and a half, Prime Minister Abe Shinzo has successfully cultivated a close relationship with Donald Trump. Abe has defied criticism in becoming the most stalwart friend of the unpredictable American president among world leaders.

Now that strategy is facing its moment of truth. On multiple fronts, from trade to North Korea, Trump has taken steps that directly challenge Japanese national interests. And more may be on the way, including a mid-May decision to pull out of the Iran nuclear deal, which Japan supports, and a hard push for Japan to negotiate a bilateral free trade agreement with the U.S.

The question now facing Abe is whether Japan can say “no” to Donald Trump, to echo the title of the famous book of the 1980s. This will not be easy.

“From the moment of that first visit to Trump in his tower castle on Fifth Avenue, right after his presidential victory, Abe and his boys understood that the most important key to getting along with Trump is to never say no to him, under any circumstances,” a veteran Japanese journalist told me. And as the reshuffles of recent weeks in the Trump administration have proven, the President does not like being opposed – eventually, he gets rid of those people and surrounds himself with those who will only say ‘yes.’

Unfortunately for Abe, this moment comes at a time when he is at his weakest politically due to the Moritomo Gakuen scandal. With his support rates dropping precipitously, he has even less leeway domestically to make unpopular decisions, such as to enter a trade negotiation where the Americans would demand to open agricultural and auto markets.

This makes Abe even more determined to preserve his friendly relationship with Trump. “That’s the main reason people are reluctant to drive him out,” says a well-informed American observer of Japan, who maintains close ties to Abe. The political situation would only worsen “if suddenly Abe were seen as having lost his magic touch with Trump,” he says.

Abe has successfully used foreign and security policy to distract Japanese voters from his problems at home. He did so in the last snap election for the Diet, pointing to the North Korea threat as a principal theme of his campaign to counter the focus on the multiple scandals at home.

With the scandal mounting again, Abe has set up a crowded schedule of diplomacy that suggests an almost frenzied search for some kind of foreign policy triumph to shift attention away from his political woes. The upcoming weeks are packed:

• In mid-April, Abe will head to Washington to try to salvage his ties to Trump and reinforce a tough line on North Korea, ahead of the North-South Korea summit at the end of April;

• In early May there may be the long-delayed Japan-China-South Korea trilateral summit in Japan, perhaps preceded by a bilateral visit of South Korean President Moon Jae In;
• In mid-May, Abe heads to Russia to try, yet again, to make a breakthrough with Putin on the Kurile islands territorial dispute;

• At the end of May, perhaps, if the Trump-Kim Jong Un summit takes place, Abe may try to hold his own summit with Kim, hoping to finally resolve the abductee problem.

All of these seemingly separate initiatives, “add up to what appears to be a desperate attempt to change the subject,” observes highly respected Japan scholar Richard Samuels, director of the Center for International Studies at the Massachusetts Institute of Technology (MIT).

These efforts face serious obstacles, he points out, from the tough Russia line laid out last week by visiting Foreign Minister Sergei Lavrov, to the jeering response of Pyongyang, and of course Trump’s decision not to exempt Japan from the steel and aluminum tariffs last week, accompanied by his threatening comment about Abe and trade.

“I’ll talk to Prime Minister Abe of Japan and others — great guy, friend of mine — and there will be a little smile on their face,” Trump said. “And the smile is, ‘I can’t believe we’ve been able to take advantage of the United States for so long.’ So those days are over.”

At this moment, “Abe seems to be flailing at just the moment that he could be taking a victory lap on TPP, bolstering defense, and having been able to keep Japan on its board with Trumpian waves all around,” says Professor Samuels.

Amidst all of these developments, the most significant is of course the situation on the Korean peninsula. Trump’s almost casually announced decision to meet with Kim Jong Un clearly shocked both Abe and the Japanese Foreign Ministry. But it did not totally surprise them.

Since this writer arrived in Japan last September for a prolonged visit, I have repeatedly heard senior Japanese foreign ministry officials express the fear that Trump might seize the opportunity to claim a much needed victory in the form of a North Korean agreement to halt, if not roll back, their intercontinental ballistic missile (ICBM) program.

For Trump, he could claim to have ended a threat to the American homeland. But for Japan (and for South Korea), it would mean a defacto separation of U.S. security from that of Japan. “Abe,” a source familiar with his thinking told me, “is worried about Japan being isolated.”

In Abe’s view, the source told me, the worry that Trump would “make a soft deal” is connected to the somewhat insidious influence of the South Korean government.

“Abe fears Moon Jae-In has Trump’s ear,” a fear that was vastly deepened after the Olympics peace talks and what is seen as a naïve acceptance at face value of the North Korean message by the Moon envoys who went to Pyongyang.

Abe’s decision to rush to Washington in April was intended to counter the Korean push for dialogue. “Abe believes his role is to keep Trump’s spine straight and not suddenly give Kim Jong Un a bear hug,” the informed source told me.

The decision to replace U.S. National Security Advisor Lt. General H.R. McMaster with conservative commentator and former Bush administration official John Bolton was welcomed by some in the Prime Minister’s office and the Foreign Ministry.

Bolton is a notorious hardliner who is deeply skeptical of any type of negotiations with North Korea and certainly any type of mere freeze. Presumably he, along with the new Secretary of State, Mike Pompeo, will act as a check against the kind of ‘soft deal’ which Japan worries about.

But any celebration in Tokyo would be premature, and incredibly shortsighted. The hawks are also disdainful of the value of alliances and support the preventive use of military force. If the North Korea talks collapse, likely before they even convene, many American analysts worry this could lead us right back to the brink of war, with no diplomatic exit available.

Abe and his advisors are eager to claim that Trump is going to push their position on the return of Japanese abducted by North Korea with Kim. But American policy makers view this largely as a Japanese obsession that they have to acknowledge now and then but are hardly likely to put on a summit agenda.

The use of force may be even more likely in the case of the Middle East. Bolton and Pompeo are longtime opponents of the Iran nuclear agreement and will lend weight to Trump’s already well-known desire to end what he thinks is a ‘bad deal.’

The drift toward open conflict with Iran will be encouraged by Israeli Prime Minister Benjamin Netanyahu and by the Saudi monarchy, who maintain close links to Trump via his son-in-law, Jared Kushner. In May, the Trump administration is planning to go ahead with the move of its embassy in Israel to Jerusalem, which will trigger additional tensions.

Japan has long opposed this drift towards conflict with Iran. It has significant interests in the continued flow of oil and gas from the region, including from Iran and Qatar, both targets of the Saudis.

The rise in U.S. tensions with China offers a similarly double-edged sword to Japan. On one hand, Abe and his advisors may welcome increased tensions with China, and the recent warming of relations with Taiwan, as it matches their own views. But Japanese business interests and policy makers are not enthusiastic about the launch of an all-out trade war with China, one in which Japanese investment and trade may be targeted as well in Chinese retaliation.

This dilemma explains why Abe and the Foreign Ministry are also hedging their bets. The continued push for improvement of relations with Russia, hopefully leading to a peace treaty deal down the line, is one piece of that strategy.

So is a slight warming of ties to Beijing, reflected in China lifting its opposition to holding the long delayed trilateral summit. The possibility of a Kim Jong Un-Abe summit may be the ultimate hedge but that is not likely to go ahead unless the Trump summit takes place.

Ultimately, however, no Japanese government can afford to openly say no to Washington, but it may draw some lines, perhaps on trade but also on Iran. If things continue to unravel in Washington, as well as here at home, it is increasingly likely that government will not still be led by Mr. Abe. In that case, uncertainty will prevail not only in Washington but in Tokyo.