The Peace Train Leaves The Station 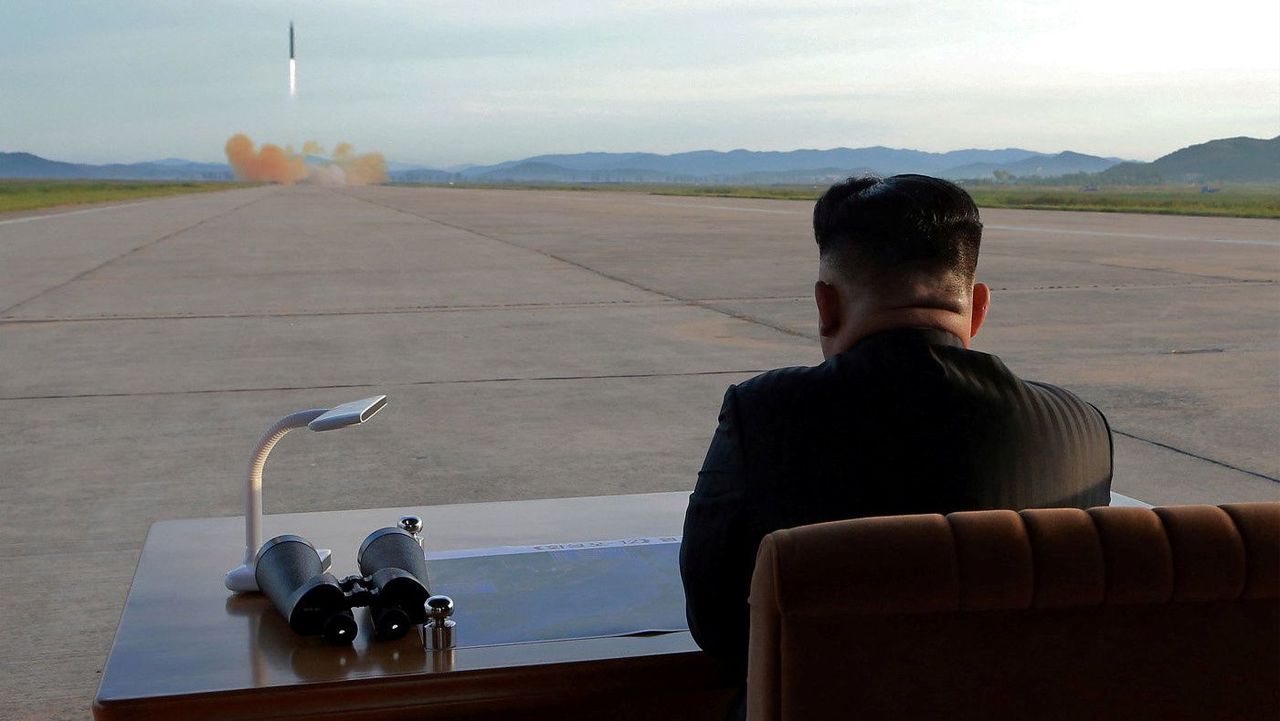 (Photo by KCNA via Reuters)

In a flurry of developments that left experts stunned, the long-stalled Korean peace train has suddenly left the station. Sitting in the locomotive is the engineer of these events, North Korea’s young leader, Kim Jong Un.

The conductor of the peace train, welcoming the passengers aboard, is South Korea’s President Moon Jae In. At the front of the passenger car, we find a jumpy U.S. President Donald J. Trump. A few rows back, wearing a quiet smile, sits Chinese President Xi Jinping. And in the last row of the car, a clearly unhappy Japanese Prime Minister Abe Shinzo tightly clutches the armrest of his seat.

Where is the peace train headed? No one really knows. It can easily be derailed. And it could lead not to peace, but to war. But two things are clear and need to be more deeply understood – this is a Korean-driven and Korean-shaped journey; and for now, whether the experts like it or not, there is no alternative.

On both points, the Japanese government is deeply concerned and has not yet fully accepted that reality. Prime Minister Abe will do his best to move to the front of the car and sit again next to Trump, maybe to change the direction of the train. But he is likely to fail.

Despite the American belief that they shape events, this has been a Korean affair. That reality was punctuated by the scene of South Korean government officials, standing in front of the White House, to announce the decision of an American president.

The road to this moment starts on July 7, 2017 in Berlin, where President Moon delivered a major address, calling for a restart to the peace process and offering an elaborate roadmap for cooperation that could lead eventually to the reunification of Korea.

“For quite some time,” Moon said, “I have argued that my country must sit in the driver’s seat and lead Korean Peninsula-related issues based on cooperation with our neighbors.” Moon referred to the growing war talk on the peninsula, after months of watching Trump and the North Koreans trade insults and threats.

Moon offered support for a policy of sanctions and pressure. But he also made it clear that Seoul wanted to break the impasse. Moon’s speech, which was not widely read in the West, was a full-throated embrace of the “Sunshine” policy of North-South engagement followed by the two previous progressive governments (Moon served as chief of staff to then President Roh Moo Hyun).

Progressive policy makers deeply believe that the Sunshine policy would have worked to change the North if it had not been for the hardline actions of the Bush administration, followed by the decision of South Korean conservative governments that took power in 2008 to dismantle the structure of cooperation. In that world view, sanctions and pressure do not really work in the long term, and at best on a limited basis.

The progressives returned to power eager to open the door again to Sunshine-style engagement. “Now,” Moon said in Berlin, “we are left with North Korea to make its decision.”

For a half year, the Pyongyang regime showed no interest in this open door. Instead they followed an accelerated pace of testing of nuclear weapons and missile delivery systems. War talk escalated on both sides of the Pacific and economic sanctions intensified.

In his annual New Year’s address, Kim Jong Un signaled a shift, one misread by most Western analysts who focused on the most inflammatory rhetoric. Kim declared victory in the testing of a nuclear force capable of reaching American shores and a readiness to give more attention to the economic side of their dual track byungjin policy of pursuing both guns and butter. More surprisingly, he focused his attention on the South, supporting the Winter Olympic games and offering dialogue with Moon.

The Olympic breakthrough in North-South relations followed, leading to the agreement to hold a third inter-Korean summit, the first since 2007. The dispatch to Pyongyang of a senior South Korean team, led by the intelligence chief, himself the organizer of the two previous summits, led quickly to the events in Washington this past week.

“Things are moving in the expected direction, but with unexpected speed,” says Seoul-based analyst Andrei Lankov, who follows the North very closely based on his long experience there going back to the Soviet era.

In his view, the initiative is coming from Kim, who is now in a position to offer minor concessions, even a freeze on testing, at no cost to the program. Lankov sees the North Koreans as rattled by the war talk emanating from Trump, and less so by the impact of economic tightening.

“Both sanctions and military threats are (perceived as) real, but so far sanctions have not had any noticeable impact,” Lankov told me. Based on anecdotal evidence, including recent visitors to Pyongyang, grain prices and exchange rates are stable.

“It is, arguably, a question of time before the sanctions will have some impact, albeit one cannot be certain how serious this impact is going to be. So, right now their goal, I presume, is to make sure they are not shot at, and their next goal is to neutralize the impact of sanctions.”

The Moon administration is eager to lend itself to the second goal, highly motivated as well by the shared fear of an American president who may not have much regard for Korean civilian life.

“Donald Trump scared the bejesus out of them by talking about war,” observes a former senior American diplomat based in Seoul. The Moon administration is prepared to offer economic relief to the North Koreans but they also know, for domestic political as well as strategic reasons, they need some movement on the nuclear issue to allow that to happen.

At the unusual meeting in Pyongyang between Kim and the South Korean envoys, led by national security advisor Chung Eui-yong and intelligence chief Suh Hoon, the South Koreans made it clear they could not proceed to the inter-Korean summit without some opening to Washington. Chung, according to accounts supplied by South Korean officials, had barely begun to lay this out when the North Korean leader interrupted him. “I understand you,” they quoted him saying, “I know your problems.”

Kim offered a package – the inter-Korean summit in April, on the southern side of the Demilitarized Zone in Panmunjon; withdrawn objections to a planned U.S.-South Korean joint military exercise; and a freeze on North Korean missile and nuclear testing while talks go forward.

But there was another element, which Chung conveyed to the White House – an invitation to meet with Trump and to discuss “denuclearization of the Korean peninsula,” a familiar term in the North Korean lexicon for negotiations on the premise that both are nuclear powers.

According to one American official, as yet unconfirmed, Kim offered to go to Washington for that meeting, an offer that is not unprecedented, and in some ways very attractive to Pyongyang.

“Kim Jong Un going to Washington is not a problem from the perspective of North Korean interests,” says David Straub, a former State Department official, and a veteran of talks with the North. “This is a jackpot for them to be treated as equals.”

Trump’s instant acceptance of this offer, which reportedly shocked his closest advisors, may have been fueled by the idea of hosting it in the U.S. In any case, it seems to have even caught the South Korean envoys by surprise – they had to wake Moon up in the middle of the night to get clearance to issue the statement on the White House front lawn. It is possible they were anticipating only the beginning of a prolonged process of consultation and negotiation.

Pyongyang, however, was probably less surprised. “The North Koreans have been preparing for this move for months and months,” a veteran North Korean analyst in the U.S. intelligence community told me.

“Pyongyang has been watching closely events in Washington, and figured that Trump was getting desperate and would lunge at the chance for a big win. Both sides can go into this meeting thinking they have a big win. KJU can say byungjin succeeded; Trump can say maximum pressure works.”

Where, or even whether, this summit will take place remains to be seen. But from the viewpoint of both the South and North Korean governments, it has already accomplished their immediate goal. It clears the way for the inter-Korean summit, which will come first, and an agreement on a likely set of steps that will effectively loosen the attempted economic blockade of the North.

Loopholes in the sanctions regime will be widened – starting probably with tourism and humanitarian relief but extending even to the reopening of the Kaesong industrial park in the north.

The U.S. may be under the illusion that it is in control of the train now. But that is not the case. The one clear way for the U.S. to regain the initiative is to return to the threat of war – and there are some around the administration eager to do so.

We will then be back to where we left off, but with a huge rift opened up between Washington and its ally in South Korea. Perhaps Prime Minister Abe will be happy, again, to see that. But in the long run, it may be more dangerous.