The Games Are Over--Or Are They? 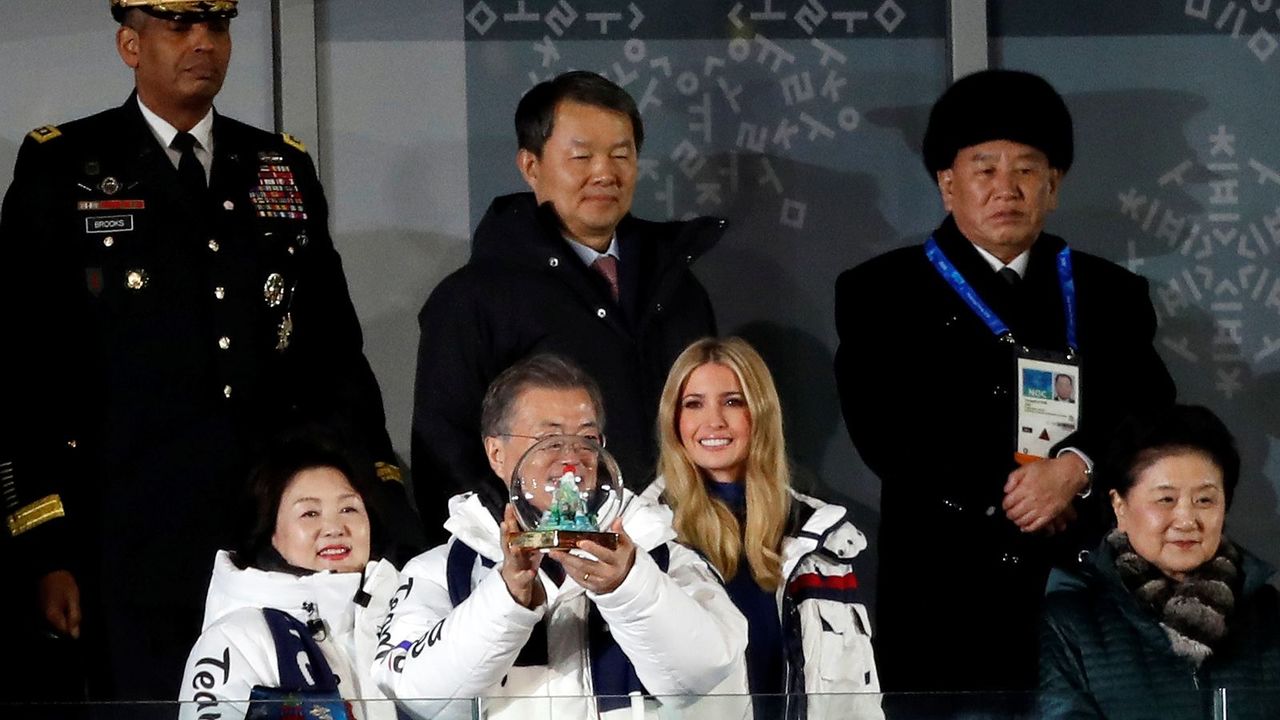 The Pyeongchang Winter Olympics are history, the medals won and the athletic thrills fixed in our memories. But what about the diplomatic competition among Seoul, Pyongyang, Washington and Tokyo? The results of those games are not yet clear.

As the Games came to a close, the South Korean efforts to mediate a meeting between the U.S. and North Korea were revived, with signaling from both sides that they were willing to meet without clear preconditions. But this remains a highly fragile process, fraught at every moment with the danger of collapse.

South Korean President Moon Jae-in was determined to use the Olympic Games as a means to a much larger end – to open the door to a renewed engagement with North Korea, picking up the threads of previous progressive governments.

President Moon and his close advisors have long concluded that they should take the lead in creating an inter-Korean dialogue that can ease the danger of war on the Peninsula and drag the U.S. into parallel talks with Pyongyang. But Moon must proceed cautiously – he is not willing to risk an open break with the U.S. and the political backlash at home that may result.

Both Pyongyang nor Washington, for very different reasons, are extremely wary of entering talks, particularly if they can be portrayed as a retreat from their deeply held positions. For the North Koreans, that means no negotiations to end their nuclear weapons program. For the U.S., it means all talks must begin with a commitment to denuclearization as the end point.

The North Korean regime clearly made a decision, signaled in Kim Jong Un’s New Year’s address, to respond to the persistent call of the progressives to open up serious dialogue, spurned for months. For Pyongyang, the incentives to talk are multiple. South Korea is the soft spot in the economic blockade that the U.S., Japan, and to a lesser extent China have been intensifying.

And it sees an opportunity to exploit differences between Seoul and Washington – driving wedges in pursuit of the never-lost long term goal of reunifying the Peninsula on their own terms. The willingness to meet the Americans was a price that Pyongyang had to pay for this.

President Donald Trump’s administration is divided, on this as on many other issues, and laboring under the burden of erratic leadership. There is an overarching strategy, continuing the policy of the previous two administrations, to use economic sanctions, political isolation and the threat of military action to squeeze the North, leading to either serious talks or, less likely, Chinese-sponsored regime change.

The divisions are between those who are ready to talk without preconditions, and those who are prepared to pull the trigger out of frustration. The White House, along with their close partner in Tokyo, Prime Minister Shinzo Abe, responded positively to the South Korean request for talks at the Games mainly to keep the South Koreans on the reservation.

At the opening of the Games, despite Seoul’s peace offensive, it was evident that both Pyongyang and Washington were almost entirely focused on their own aims. The North Korean regime used the Games mainly to disarm the South Korean public with a familiar pull on the emotional heartstrings of Korean unity. Wearing a somewhat sinister smile, accompanied by massed disciplined ranks of North Korean musicians and cheerleaders, the North Korean First Sister, Kim Yo Jong, appeared to have captured the Olympic stage.

The North Korean charm offensive was countered by the odd couple of U.S. Vice President Mike Pence and his sidekick, Prime Minister Abe. Pence carried the tough message of Washington and Tokyo – no talks except about denuclearization, no cracks in the “maximum pressure” approach to sanctions, accompanied by a drumbeat of reminders about the brutal nature of the North Korean regime.

Despite his public posture, there was a plan for Pence to meet the North Koreans on Saturday morning after the opening of the Games. In the narrative supplied by the White House, this was at a North Korean request and it was called off only hours before the meeting by the North Koreans who purportedly were not willing to listen to tough talk directly from Pence to the sister of the Supreme Leader.

There are reasons to believe, however, that this narrative is self-serving. The meeting was apparently organized by Moon and the South Koreans, and neither Pyongyang or Washington was particularly eager to go ahead with it, though both initially agreed, for very different reasons, to satisfy Seoul.

North Korean reluctance to talk to Pence was visible, if cloaked. “The North Korean delegation did not have the intention to conduct discussions that go deep into U.S.-DPRK relations, even though the meeting with Vice President Pence had been arranged,” a South Korean expert and close advisor to the Moon administration told me later.

“Why do I think so? Because the delegation did not include anybody from the foreign ministry who is in charge of DPRK-US relations. Mike Pence’s words and behavior must not have been well received by the North Korean delegation. The North Koreans don’t like to talk to the Americans from a weak position.”

The North Koreans issued a high level signed commentary, published on Saturday, that declared they were not there to hold a dialogue with the Americans. “After seeing what the meeting was going to be like, Pyongyang decided not to cast pearls before swine,” says an American North Korean expert with long experience in the intelligence community. “The North Koreans have long operated on the theory that sometimes no meeting is better than a bad meeting.”

Pence was probably relieved to be off the hook. But wrapped within his hardline stance was already a significant shift in American policy. The meeting would have taken place without any preconditions, a concession that some American policy makers have been advocating for months. They argue that such contact is necessary to at least test the mood in Pyongyang and to create channels to lessen tensions and reduce the danger of miscalculations that could lead to war.

Following this abortive effort, both Pyongyang and Washington retreated into their respective propaganda bombasts. President Moon, however, was not deterred in his peace quest. The closing ceremony brought together yet another pair of U.S. and North Korean delegations – the American one headed by Trump First Daughter, Ivanka, and the North Korean one by the notorious, and banned, senior official Kim Yong Chol, a key figure in managing relations with the South accused of planning the sinking of a South Korean naval vessel in 2010.

Ivanka’s dinner meeting with Moon displayed the evident gap between the two governments as Trump called for maintaining “maximum pressure to ensure that the Korean peninsula is denuclearized” while Moon thanked the U.S. for its “strong support for inter-Korean dialogue.”

Moon’s persistence appeared to pay off when, after a meeting on Sunday, Kim supposedly declared their readiness to talk to the U.S. But the Blue House statement also acknowledged that Kim did not respond directly to the idea that talks would include denuclearization.

In the North Korean hierarchy, however, Kim is largely responsible for North-South relations, not the U.S. Notably, he specifically embraced Moon’s insistence that some interaction with the U.S. was necessary to make progress in inter-Korean talks.

This time, the North Korean delegation did include senior foreign ministry officials who traditionally deal with the U.S. And Ivanka’s crew also included the senior National Security Council official dealing with Korea, Allison Hooker, a former State Department intelligence analyst who has had dealings with North Korean officials. The White House carefully acknowledged the North Korean statement, leading to intense speculation that Hooper met with her North Korean counterpart secretly this weekend.

Whether these contacts lead anywhere remains to be seen. At the least, it has kept alive the Moon administration’s earnest hope that it can bring Washington and Pyongyang into the same room. For Moon, the goal of talks is not actual denuclearization but a deal that freezes in place the North Korean nuclear and missile programs – purportedly as a first stage but more realistically as an end point.

If this delicate process does not blow up quickly, Moon would like to set the groundwork for a proposed summit meeting with Kim Jong Un. That may require a scaling down, if not a halt, of the joint military exercises scheduled to take place – after being postponed for the Games – in April.

Two crucial questions are unanswered. What is Donald Trump’s own bottom line? And what does Kim Jong Un really want – to bust sanctions via the South Korean opening, or to engage the U.S. As the veteran U.S. intelligence analyst put it: “Is Seoul the object or the portal?” The only thing clear is President Moon’s determination, reinforced by the apparent success of the Olympics, to reopen the pathway to the North.