North Korea: The Roads to Peace and War 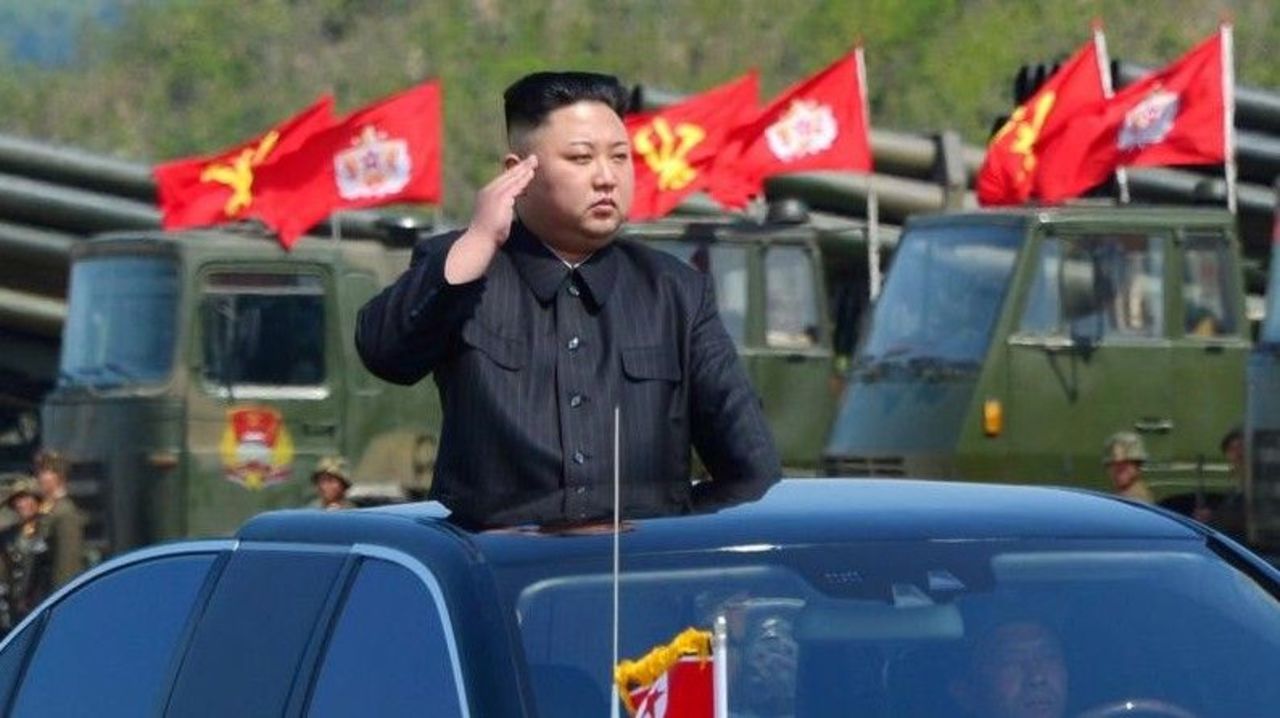 (Photo by Reuters via KCNA)

Tammy Duckworth, the junior U.S. Senator from Illinois and a Democrat, knows something about war. She is a retired U.S. Army Lieutenant Colonel who lost both her legs while serving in the Iraq war as a combat helicopter pilot. So, when she says we are close to war in Korea, you have to pay attention.

Duckworth has regular contact as a Senator with senior American defense officials. “Everything we’re doing shows a military that, in my personal opinion, has turned the corner from ‘we need to try to prevent this from happening’ to a military that’s saying the president is likely to make this decision and we need to be ready.

Few questions have as much importance for our future this coming year than whether we are heading for war or peace on the Korean peninsula. For Japan, as for Korea itself, this is a life or death issue – any war in Korea will necessarily involve Japan, both as a base for the U.S. war effort and as a potential target of North Korean attack.

No one can answer that question of war or peace definitively at this moment. But we can sketch out two pathways – one to a form of peace and one to war – that lie ahead.

The path to peace – in our time

The path to peace is perhaps easiest to imagine. It is not a true peace but rather an avoidance of war, arguably one that might make war even more likely down the road.

This path begins with direct contacts between the North Korean regime of Kim Jong Un and the administration of Donald Trump. It depends on two essential factors – that Kim will avoid a provocation that will make it impossible for dialogue to take place and that Trump will be willing to allow what is certain to be a messy and difficult process of negotiation to unfold. As we have seen in recent weeks, neither of those conditions are now present.

Let us start with Pyongyang. Since last summer, some veteran North Korea watchers believed that Kim was moving toward a pivot in his relentless march toward nuclear power status. On September 3rd, the North Koreans carried out the successful test of a massive warhead, at least 10 times larger than any previous test.

They claimed it was a miniaturized hydrogen bomb, capable of being mounted on a long-range missile and that it constituted a “very meaningful step in completing the nuclear weapons program.”

Some analysts hoped Kim was ready to declare victory in their campaign to achieve that status and turn toward a focus on the economy, and with it some kind of negotiations with Washington. But apparently Kim, perhaps feeling the increasingly painful implementation of sanctions against the North, with intensified Chinese participation, decided to go up the escalation ladder again.

The November 29 test of the Hwasong-15 long range missile was asserted to be an intercontinental ballistic rocket with a “super-large heavy warhead capable of striking the whole mainland of the U.S.” which now “meets the goal of completion of the rocket weaponry system development set by the DPRK,” the formal name of North Korea.

The declaration of having ‘completed’ its ICBM development would seem to signal a readiness to now make the promised pivot. The North Koreans have opened a window, provided a small pause in the action, but how real is that pause.

The regime has already told us what a possible next move might be should they decide to once again go up the ladder of provocation – an atmospheric test of a nuclear weapon, somewhere out in the Pacific Ocean. The annual New Year’s address by Kim – and this is written ahead of that event – may provide some clue as to where things are headed in Pyongyang.

Secretary of State Rex Tillerson appeared to be signaling a clear readiness for talks with Pyongyang without preconditions in public comments in mid-December. The beleaguered Secretary of State was forced within days to walk those comments back by the White House, while still stating the U.S. door was open to talks with the North Koreans.

The difference between the State Department stance and that of the White House is two-fold – first, the senior State Department officials are ready to move away from the insistence that all talks must be based on the acceptance of the long-standing, 2005 Joint Statement of the Six Party talks that commit everyone to the goal of denuclearization.

Second, State officials are ready to engage a process with no clear end goal, and even to reach a deal that would amount to a “moratorium” in North Korean testing of nuclear warheads and missiles in exchange for U.S. concessions, such as the partial lifting of sanctions or a suspension of joint military exercises with South Korea. The White House is not ready to move publicly away from its stated position – all talks must lead to denuclearization and no freeze for freeze deals.

Senior officials who favor the State position argue, however, that the President simply needs a result that allows him to declare victory, to assert somehow that the North Koreans have yielded and that he has taken care of the threat of an ICBM aimed at the continental U.S. Facing a difficult domestic political situation, and heading toward the vital midterm elections in November 2018, those officials believe the President may decide to opt for this, even if such an agreement collapses, as it inevitably will, down the road.

Meanwhile the administration of Moon Jae-in in South Korea would eagerly embrace such a deal, especially if it comes with a North Korean decision to respond positively to their numerous offers of engagement. The Chinese and Xi Jinping are certain to embrace this as well, as will Russia.

Only Japan will be left on the outside, looking in. The Prime Minister’s Office has been warning against precisely such a bad bargain, seeing it as leaving the North Korean nuclear strike capability that can target Japan intact. And it implicitly separates the security of the U.S. from its allies in Japan and South Korea. But Tokyo will accept it, not wanting to be the odd man out.

How things play out in the first three months of this year will be crucial. There could be a United Nations sponsored truce during the Winter Olympic Games in February in PyeongChang, South Korea. That may be a moment for Kim to open the door, even slightly, to dialogue with the South. And if it is accompanied by a decision to enter talks with Washington, something that Pyongyang still hesitates to do, a narrow pathway may get opened.

The pathway to war

North Korea’s interest in heading into talks with the U.S. is clear. It will be a victory if Kim can get the Trump administration to agree to what amounts to a recognition of its status as a nuclear weapons state, to defacto drop the insistence on denuclearization, get the economic pressure on the regime eased, and, as a bonus, drive a wedge between Washington and its allies. A moratorium on testing, even one that lasts for a while, is a small price to pay for this.

The more difficult question to answer is whether Donald Trump would buy this bargain. Pyongyang, not unlike American analysts, has been desperately trying to understand who Trump really is and what is going on within the walls of the administration.

Going back to last spring, and into the summer and fall, the North Koreans have invited or sought meetings with a string of American reporters and experts, peppering them all with the same questions. “When he speaks, I have to figure out what he means, and what his next move will be,” a senior North Korean foreign ministry official toward visiting New Yorker writer Evan Osnos last September. “This is very difficult.”

Are Trump’s threats of war simply a calculated game to pressure Beijing and Pyongyang to yield, the North Koreans wonder. “He might be irrational – or too smart. We don’t know,” the foreign ministry U.S. watcher told Osnos.

It is not hard to see why the North Koreans have yet to respond to the various attempts to initiate dialogue emanating from the State Department. They can read the American media too and know that this is not where power resides in the Trump administration. Without a direct signal from Trump himself, the danger is that Kim and his generals will go up the provocation ladder again, in the hopes it will yield what he seeks. But the North Koreans are clearly not sure where the red line is located for the President.

On one hand, North Korean military and political leaders have a long history to draw on which tells them that they can go pretty far down the provocation road without triggering a serious military response, that the threat of wider war is enough to restrain both Washington and Seoul. But now - and it is not clear we can credit this to some calculated ‘madman’ game by Trump — they may not be as sure of that as before.

If things remain stuck at this point after a few months, during which time North Korea continues lower levels of testing, Kim will probably do what he has done before, decide that the only thing the Americans understand is force and test another H-Bomb or an even bigger, new ICBM.

“Donald Trump does not want war,” a senior State Department official who is an advocate of a deal with Pyongyang, said to me recently. I agree with that assessment – if we are talking about the idea of a pre-emptive or preventive attack on North Korea.

Even the much-discussed scenario of a so-called surgical strike on North Korea is likely not in the cards – for the obvious reason that Secretary of Defense James Mattis and the chairman of the Joint Chiefs of Staff, General Joseph Dunsford, have undoubtedly told the President that such a strike is likely to trigger a wider conflict, even a full-scale war.

Under the current circumstances, in which Pyongyang has difficult discerning the goals of the Trump presidency, it is likely that Kim will see this as the beginning of an effort to remove him from power.

A small-scale attack along the Demilitarized Zone is not likely to spark an American attack, senior U.S. officials believe. But in the case of a provocation on the level of an atmospheric test, all bets are off. “At that point,” a veteran North Korea watcher from the U.S. intelligence community told me, “I definitely would not be in Tokyo.”

This article was written ahead of Kim Jong Un’s important New Year’s address. That speech was a clear opening, as predicted in this article, to dialogue, offering talks with South Korea, an Olympics truce and describing the North’s nuclear weapons as purely an instrument of deterrence.

The North Korean leader is clearly intent on driving a wedge between Seoul and its Washington ally and easing economic pressures. But it is also an opportunity to ease tensions that the Trump administration may choose to grab, for its own reasons.