South Korea Maneuvers Between China and The U.S. 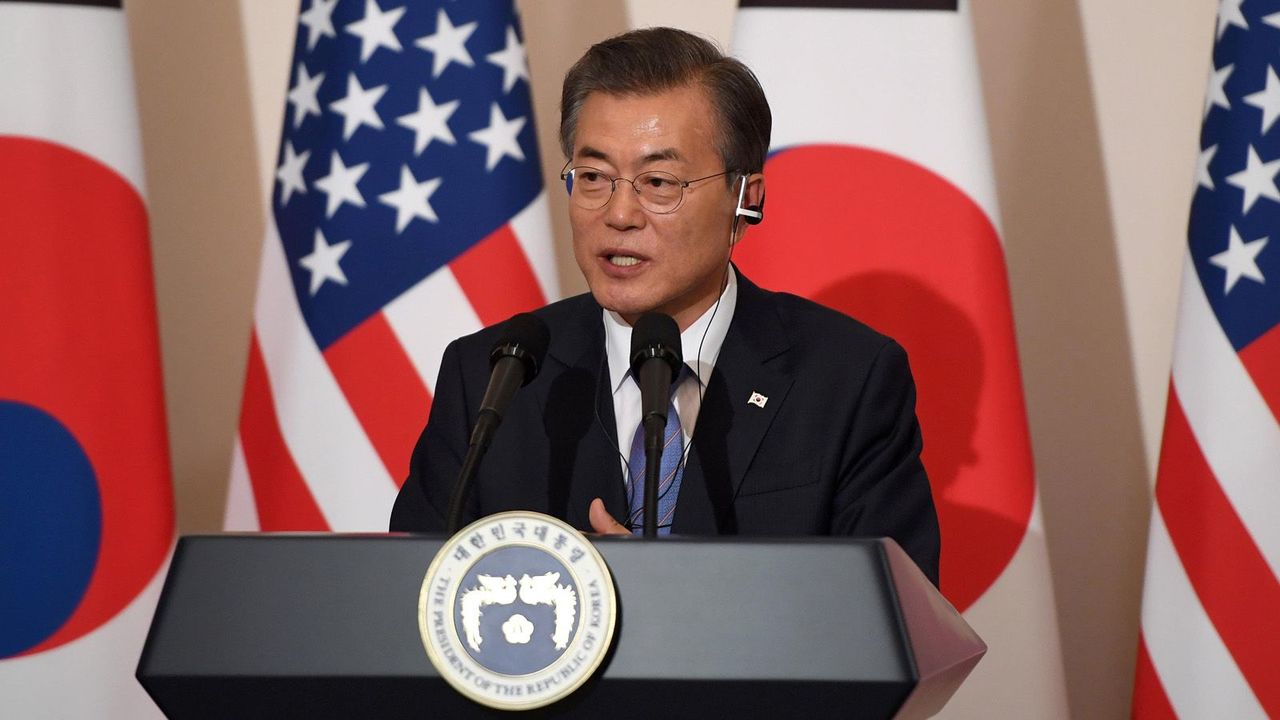 Caught between Donald Trump’s vague threats of war and Kim Jong Un’s defiant pursuit of the status of a nuclear weapons power, South Korea’s President Moon Jae-in finds himself seeking maneuvering room from Xi Jinping. Moon heads to China later this week, a visit that has acquired greater urgency in the minds of the South Korean policy elite because of their growing sense of crisis.

The feeling of crisis is not visible on the surface in South Korea. The general public sees the current tensions as a repeat of the many war scares they have endured over the past two decades or more.

“Generally, the public mostly still believes Trump must be bluffing,” says David Straub, a former senior State Department official with long experience in Korea who is currently in Seoul at the prestigious Sejong Institute. But, Straub and other analysts agree, if you talk about the South Korean elite, the situation is dramatically different.

“When you talk to South Korean high-level officials and analysts, they are very tense and concerned, and in some cases, close to panic,” says Andrei Lankov, a Russian scholar at South Korea’s Kookmin University who is widely respected and consulted for his insight into North Korea, where he studied, as well as the South.

That feeling comes from senior officials around President Moon who visit Washington regularly – as does Lankov – and see what they think is a “dangerous current mood” in the U.S.

“The situation in Northeast Asia is unusually tense,” Lankov told Toyo Keizai Online. “Having done Korean issues for some 30 years, I have probably never seen such a potentially dangerous crisis. The probability of a war, most likely provoked by a unilateral U.S. action, is not particularly high, but quite real nonetheless. If it is going to happen, South Koreans will suffer the greatest damage and President Moon is trying to do what he can to decrease the risks.”

The main Moon approach has been to stay as close as possible to President Trump, to line up with the policy of tough sanctions against North Korea, to join in displays of force as we saw in the recent joint air force exercises, and to show little visible distance between the two leaders.

That was evident in the handling of President Trump’s recent visit to South Korea which was as close to a love fest as was possible. But no one believes that the two men are on the same page – Moon has repeatedly insisted that he has assurances that no use of force will take place without South Korean consent, but Trump has never repeated those words. And the desire of the Moon administration to resume engagement with North Korea, even though dampened by the recent missile test, remains intact.

The immediate goal of Moon’s visit is to persuade the Chinese to maintain tough sanctions on North Korea. The South Koreans are not necessarily confident that sanctions will yield any immediate, or maybe even any, results in terms of persuading the North Koreans to move away from their path toward full nuclear capability. Rather, the South Korean government believes that “as long as China is serious (or, at least, looks serious) in regard to sanctions, the United States is less likely to resort to the use of force,” says Lankov.

Straub also sees the visit as aimed in part at tightening coordination with the PRC in order to move the U.S. away from a military option toward some kind of negotiations. In addition, Moon wants to further reduce the economic punishment that China imposed on South Korean businesses in response to the deployment of the U.S. THAAD anti-missile defense system, and to get the PRC to support the Winter Olympic Games in Pyeongchang, ideally through the presence of Xi at the Games.

But beyond these short-term goals, some analysts fear that the progressive government of Moon is seeking to move South Korea away from its strategic dependence on the alliance with Washington and towards a position of “balance” between the PRC and the U.S.

This was a goal articulated during the Bush administration by the progressive government of Roh Moo-hyun, whom Moon served as his chief of staff. Then, as now, South Korean readiness to look to Beijing was directly related to the fear that the U.S. might resort to force and start a war on the Korean peninsula.

The Moon visit to Beijing this week was set up by an agreement reached in late October between South Korea’s foreign minister and her Chinese counterpart to end the dispute over the THAAD deployment. Chinese defacto sanctions aimed at South Korean firms had by some estimates cost the country some $18 billion in lost business.

Under the so-called “three Nos” agreement, Seoul committed to no additional THAAD deployments beyond the one battery already in country; to no creation of an integrated missile defense system with Japan and the U.S.; and no entry into a trilateral military alliance. South Korean officials subsequently denied any formal commitment along these lines but the essence has not been repudiated.

South Korean progressives argue this was a concession from China, to back off from its total opposition to the THAAD deployment. They point out that President Moon had already opposed any further missile deployment, that no South Korean government, even the previous two conservative governments, have ever supported integrated missile defense systems or a tripartite alliance with Japan. Any formal military integration with Japan has always been beyond the bounds in South Korea.

South Korean conservative security experts deeply disagree. “South Korea conceded too much to China in order to restore bilateral relations,” says a former advisor on national security to both former President Lee Myung-bak and Park Chung-hee. “The Korean government virtually promised China to waive sovereign security options. Seoul has more or less licensed China to meddle in the security decisions of South Korea and the U.S.”

The idea of ‘balance’ between China and the U.S. is particularly anathema to South Korean conservatives. “I am afraid that Beijing sees South Korea as a swing state that can be lured out of the orbit of Washington and into a more supportive relationship with China,” the former advisor says. “The three nos could put South Korea’s traditional alliance with the U.S. to a new test.”

Trump administration officials such as National Security Advisor General H.R. McMaster were careful not to directly criticize the China-South Korea agreement. But McMaster has, on several occasions, emphasized that North Korea’s goal is to drive the U.S. off the Korean peninsula.

In some ways, the Moon approach toward China is not dramatically different from the previous conservative administrations. President Park went out of her way to curry favor in Beijing, notably standing next to Xi as one of the few foreign leaders to attend a grand Chinese celebration of the 70th anniversary of the end of World War Two.

“Park wanted to strike a balance between Korea-U.S relations and Korea-China relations, and visited China first; but Moon did it the other way around, visiting the U.S. first,” Paik Haksoon, the director of North Korea Studies at the Sejong Institute told Toyo Keizai Online. “Both wanted to strike a right balance between the two powers, but one difference is that there exists a strong ‘China School’ in Moon's inner circle, but that there was no such thing in Park's case.”

There are reasons, however, for Moon to be more wary of Washington than his predecessors. “In the U.S. under Trump, he is facing unprecedented uncertainty about U.S. intentions and leadership,” points out Straub, the Sejong-LS Fellow at the Sejong Institute.

“Facing a new situation in which the U.S. homeland is directly threatened by North Korea and a risk of U.S. attack on North Korea, which Moon fears could result in a massive North Korean counterattack on the South, he needs the PRC more than ever to somehow move the U.S. from the military option to a focus on dialogue.”

For historical and domestic political reasons, no South Korean administration, including the progressives, can really afford to alienate the U.S. And even when they complain about American actions, or the American military presence in Korea, South Koreans believe the U.S. will not leave their side. In some sense, that sense of assurance allows South Koreans to seek maneuvering room with Beijing, or even to engage Pyongyang.

The more likely outcome of this visit is an attempt by Moon, in coordination with Beijing, to open the door to some kind of negotiation with Pyongyang. The Chinese have been pushing, with Russian support, for a so-called “double freeze” deal – where the North Koreans freeze, for now, their nuclear and missile testing in exchange for an end to joint military exercises with the U.S. The Trump administration has explicitly rejected that goal, seeing as a way of undermining the alliance, a view shared by the Abe administration in Tokyo.

“President Moon might be supporting this double freeze agreement, at least to a certain extent” says Lankov. “However, it remains an open question whether such support can be expressed openly since it might annoy President Trump and his close advisors.

That position has many supporters in the U.S. as well, from very senior foreign policy experts who believe, in essence, that some form of negotiation and agreement, however temporary in its effect, is better than a drift toward war. Opponents see this as a false promise, yet another bad agreement with Pyongyang that will weaken resolve and collapse within months, if not weeks. In the coming weeks and months, we will see which view prevails.