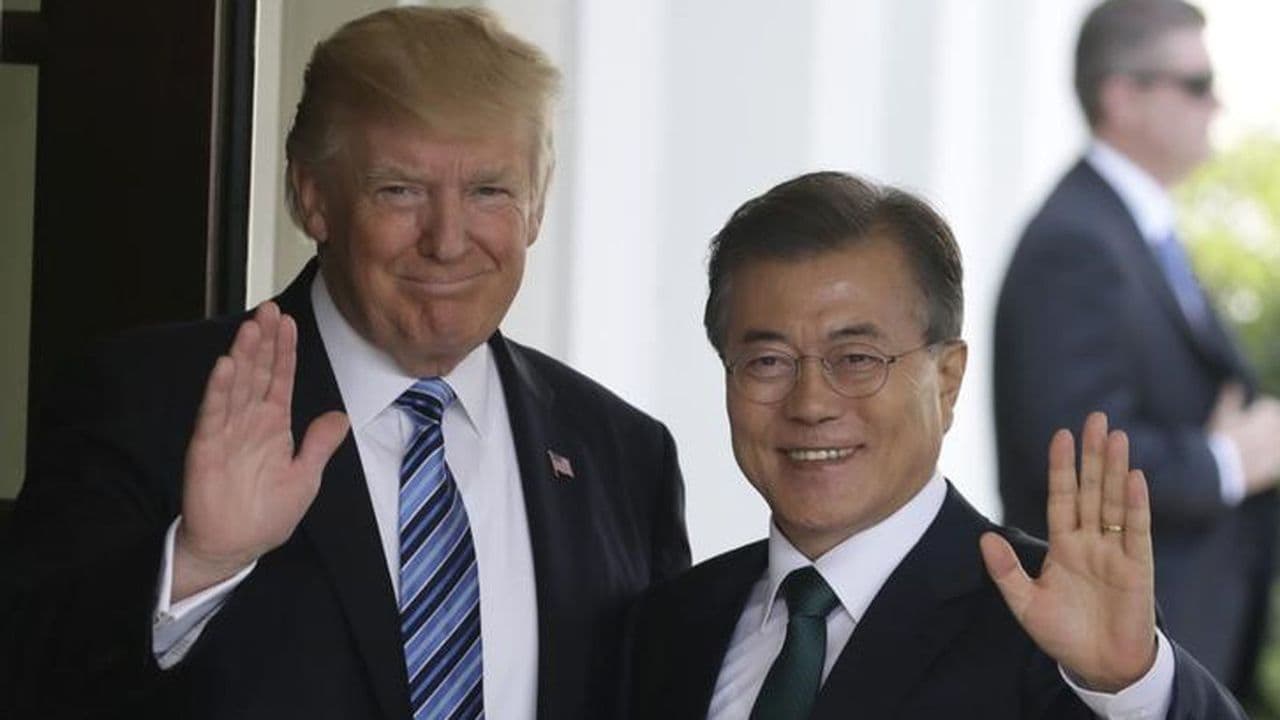 In the days leading up to the Washington summit between South Korean President Moon Jae-in and U.S. President Donald Trump, the tension in Seoul was hard to escape. Fears of an open clash between the two leaders, of a handshake that went on too long, or of a hostile early morning tweet directed at Moon were widespread.

But when a senior national security advisor to Moon met a group of American visitors after the first day of talks, he was visibly relieved. The dinner between Moon and U.S. President Donald Trump went so well, he recounted with a slight smile, that it was extended 35 minutes.

There were moments afterwards that may have prompted second thoughts in Seoul. Trump spent more time talking about South Korea as a poster child for trade imbalance than about the common threat from North Korea.

He publicly declared the intention to make South Korea the example of how he would fix this problem, even throwing in reference to the claim, denied by his own senior officials, that South Korea has not contributed sufficiently to the shared defense burden. Those were exchanges that Japanese Prime Minister Shinzo Abe managed to avoid, even though Japan may be more guilty than Korea on both counts.

Still for the Korean government – and a Korean media eager to jump on any sign of discord – those moments were less important than the perception that the two men had created a personal bond, earning the label from Trump of “good chemistry.” That was the definition of success set before the visit – and achieved.

President Moon and his administration were well aware of the potential for disaster. Many key advisors are veterans of the last progressive government in South Korea – that of Roh Moo-hyun, whom Moon served as chief of staff.

The tensions between Roh and the conservative Republican administration of George W. Bush were widely known, sparked by a hard line toward North Korea that Roh worried would lead to armed conflict and undermine his desire to advance the cause of dialogue and engagement with the North, begun under Kim Dae Jung.

Roh tried to ameliorate those tensions by taking steps that were unpopular in Korea but designed to curry favor in Washington, including the dispatch of troops to Iraq and the negotiation of a free trade agreement. Those decisions contributed to his declining public support.

There are clear echoes of that past today. Moon, elected on a wave of protest that led to the impeachment of the conservative President Park Geun-hye, is maneuvering between his own electorate and the need to avoid an open breach with Washington. Trump is deeply unpopular in South Korea – the recent Pew poll showed his favorability rating in Korea to be among the lowest in the world – though he is mostly seen as a bizarre rather than a menacing figure.

Within policy circles in Korea, among both conservatives and progressives, concern focuses mainly on the unpredictability and impulsiveness of Trump. The fact that Trump has focused so intensely on the North Korean nuclear and missile threat is in some ways encouraging, but also worrying to them. “We worry that Trump is seriously considering a military option against North Korea,” a former senior official in the previous government told me. “For Moon, his responsibility is to convince Trump not to take that option.”

Moon did his best to meet that goal. He went out of his way to embrace the security alliance, repeatedly evoking the story of how his parents survived the Korean war thanks to their evacuation from the north by American forces. He embraced Trump’s tough line of stepping up sanctions against the North and the stress on refusing to engage Pyongyang until it steps back from its nuclear and missile testing programs.

Moon also seemed to finesse the potentially explosive issue of his decision to suspend the deployment of a U.S. anti-missile system, the Terminal High Altitude Area Defense (THAAD) missiles. In meetings with Congressional leaders, Moon sold the line that the delay would be temporary, pending an environmental review.

He neglected to say that such a review could delay deployment for almost a year, or more, despite the growing missile threat. Moon also largely avoided the issue of China’s fierce campaign, complete with economic blackmail, to block the deployment. He told a Washington policy audience at the end of his visit that he opposed such pressure but urged more efforts to explain the deployment to Beijing, even though American officials have repeatedly done so.

For the most part, this display of calculated pragmatism worked well. There was no visible daylight between the two leaders over how to handle the North and THAAD totally disappeared from the summit talk, at least in public and in the joint statement issued by the two governments.

Moon also backed the American desire to deepen trilateral security cooperation with Japan. He agreed to a trilateral meeting with Trump and Abe on the sidelines of the upcoming G-20 summit and has emphasized his desire to pursue a two-track policy toward Japan, separating problems over wartime history issues from broader cooperation. Korea “needs to turn our relationship with Japan into a strategic partnership” says former foreign minister Yu Myung-hwan. “Then we can counter a rising China.”

The summit in Washington may prove, however, to be a temporary gain. Beneath the smiles, there was plenty of evidence of the gaps, and even the tensions, that exist between a progressive government in Seoul, one that echoes the views of its ideological predecessors of a decade ago, and a nationalist, conservative regime in Washington

“In fact, the two administrations have major differences over both North Korea and trade,” comments David Straub, a former senior State Department official with long experience in Korea, currently the Sejong-LS Fellow at the Sejong Institute. “But the Moon administration believes that its best chance is to try to bridge those gaps gradually. So the two sides basically papered over the differences.”

On North Korea, the Moon administration is clearly looking for an opening to pursue inter-Korean dialogue, arguing that South Korea should take the initiative, a view it slipped into the joint statement. “South Korea must take a more active role, a leading role, in improving inter-Korean relations,” Lee Su-hoon, a senior advisor to Moon, told a Seoul forum this week.

The Moon government already took an initial step in allowing a resumption of humanitarian aid and activity by non-governmental organizations. Moon also raised the idea of fielding a joint Korean team at the Winter Olympic games that South Korea is hosting next February. Senior advisor Lee suggested this could create momentum for reapprochment, with gatherings of separated families, a staple of North-South dialogue.

If there is progress on the nuclear issues – and by this the Moon administration seems to mean a temporary freeze on missile and nuclear testing – it would be followed much larger joint economic projects, not only reviving the frozen Kaesong industrial park but creation of joint economic zones, with the ultimate goal of creating a single economic community.

These ideas of engagement are well out of step with the current mood in Washington, not only of Trump but most American policy makers. And in any case the North Koreans have shown no desire to pick up the olive branch from Seoul, rebuffing even the offer of humanitarian aid. For the North, as a South Korean former senior official put it, “what are the cards that are in Moon Jae-in’s hands? Everything that Kim Jong Un wants – all those cards are in U.S. hands.”

Ironically, the North Korea issue may not be the most troublesome one for the alliance. The Moon camp was clearly caught off guard by Trump’s trade tirade. There was apparently no signal of that in the talks among lower level officials ahead of the visit, which is reflected in the bland language of the official joint statement. After dinner, Trump tweeted that they had agreed to a “new trade deal,” an assertion also not reflected in the statement.

The shift suggested that Trump is pivoting away from his talk of cooperation with China against North Korea and toward his beloved nationalist agenda of trade wars. According to Axios, Trump and his trade policy officials are preparing a wave of retaliatory tariffs against goods that they consider cases of dumping, including steel, semiconductors, and appliances like washing machines – measures that would hit China and South Korea, and others.

Despite President Moon’s concerted efforts to remain aligned with Washington on vital security issues, the trade issues may prove to be more damaging to the alliance. For now, officials in Seoul will have to settle for dodging one bullet, while waiting for the next.