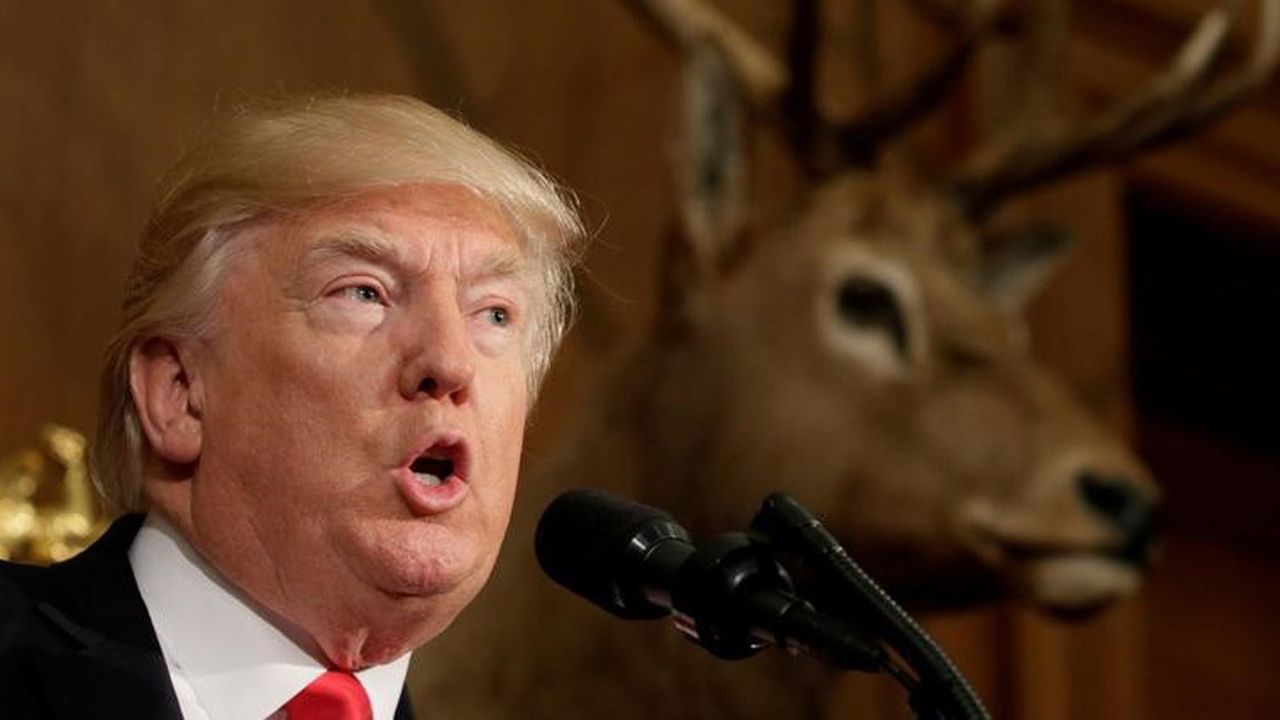 Donald Trump continues to unnerve capitals and feed a media drumbeat about impending war in Korea with his vague warnings, in interviews and tweets, of “major, major conflict” on the horizon. But the reality of American policy is best captured in a comment by the U.S. Ambassador to the United Nations, Nikki Haley, to her Chinese counterpart at a White House gathering last week. Haley turned to the Chinese Ambassador, an attendee told a reporter, and said “something like, ‘We look to you to solve this for us.’”

The Trump administration’s North Korea policy, affirmed in a recent internal review, essentially amounts to “let China do it.” The threat of a pre-emptive military strike against North Korea, on the scale of the Tomahawk missile barrage against the Syrian air base or something even larger in scope, is a calculated effort to press the Chinese into using its considerable leverage over North Korea. It plays upon the well-established Chinese fear of conflict erupting on its strategic borders.

Those threats may also serve to rattle Pyongyang, but American policy makers are uncertain whether the North Korean leadership is deterred by such threats.

Instead, the expectation is that if the North Koreans cross two clearly defined lines – conducting a 6th test of a nuclear warhead or a test of a missile system with the range to reach the continental U.S. – the Chinese will respond with devastating cutoffs of food, fuel and other essential goods to North Korea, which depends on China for some 90 percent of its official trade.

American policy makers close to the administration talk privately about China changing the course of the North Korean regime, a range of intervention that goes from squeezing Kim Jong Un to return to denuclearization talks to removing him in a Chinese-backed coup.

The ‘let China do it’ policy is hardly new. The Bush administration tried the same approach, again and again, hoping that the Chinese would bring their ally to heel. In February 2005, for example, Bush sent emissaries to China carrying a letter to Chinese leader Hu Jintao containing new details of North Korean sales of nuclear materials around the world, urging China to act. This led to intensified negotiations, yielding a joint statement on denuclearization at the six-party talks in September of that year. A year later, North Korea carried out its first test of a nuclear device.

Why does the Trump administration believe this will work now? In part, the answer is the same as under the two previous administrations --- there are no better options available. But it is also because the Chinese leadership has conveyed the impression they are prepared to act, based on an understanding reached at the summit meeting in Mar-A-Lago between Xi Jinping and Trump and in two subsequent telephone conversations.

The Chinese account, presented recently by a senior policy maker on North Korea to American counterparts, is of a bargain forged by Xi and Trump. In that Chinese version, the two leaders share the view that the North Korean nuclear issue has become an imminent question that cannot wait for a slow resolution.

Despite differences between Beijing and Washington, they agreed on the need for urgent action. If the North Koreans test a nuclear warhead or ICBM, the Chinese say, expect a more severe response from Beijing. In this context, the Chinese are ready to put their opposition to the U.S. deployment of the Terminal High Altitude Area Defense (THAAD) anti-missile system in South Korea on the backburner, for now.

This agreement on pursuing the goal of denuclearization more vigorously is paired, however, with an American agreement to solve the issue without regime change in Pyongyang, something the Chinese have long resisted. Chinese policy makers believe a push for collapse in North Korea, particularly triggered by severe sanctions, is not realistic and too risky to their interests.

Chinese officials reject the idea that their actions are motivated by the threat of U.S. military attack. Brinksmanship is a familiar tactic, carried out by both the U.S. and North Korea, the senior policy maker said. China began to increase pressure on North Korea long before the Trump administration began to signal the readiness to use force. But the Chinese do admit to sharing a worry that many American policy makers voice – that these vague threats may prompt a North Korean test of will, leading to an American response, and the danger of moving up the ladder of escalation to full scale war.

Is China really pressing North Korea? This question has been widely asked by governments and intelligence analysts in recent weeks, examining the movement of North Korean cargo ships carrying coal to Chinese ports or traffic flows across the Dandong bridge linking the two countries.

The Chinese point, as evidence of their efforts, to unusually blunt attacks on China in the North Korean official media in late February and late April, both authored by “Jong Phil,” considered a pseudonym. The articles clearly refer to China, dismissing threats to impose sanctions and vowing never to ‘dance to the tune of others.’

The President has clearly set a nuclear or ICBM test as the trigger for a response, but not the kind of shorter-range missile tests that took place this past week. “If he does a nuclear test,” the President told CBS, referring to Kim Jong Un, “I will not be happy. And I can tell you, I don’t believe that the President of China, who is a very respected man, will be happy either.”

Similarly, senior Trump officials have officially renounced the goal of “regime change,” faithfully repeating the Chinese formula that the goal is denuclearization. Secretary of State Rex Tillerson told National Public Radio last week that the U.S. was willing to engage in direct talks with North Korea, but seemed to rule out returning to the previous deals to temporarily freeze its nuclear and missile programs. “The right agenda is not simply stopping where they are for a few more months or a few more years and then resuming things,” Tillerson said. “That's been the agenda for the last 20 years.”

Privately, however, the Chinese are confident that they have steered Trump onto precisely that path, thus keeping their wayward client state intact and U.S. influence in the Korean peninsula at bay. Their chosen path is to get the U.S. back to talks with Pyongyang, based on the previous agreements and making a deal to again freeze all nuclear and long-range missile programs. There is no clear answer as to how to verify North Korean compliance, the issue that torpedoed the Bush administration attempt to reinstate a freeze.

The wildcard in all these maneuvers is one that is the least understood in Washington, and perhaps in Beijing as well, though not in Pyongyang. On May 9, South Korea will elect a new president in an early election forced by the impeachment of conservative President Park Geun-hye, who faces prosecution for corruption.

The leading candidate is Moon Jae-In of the Minjoo (Democratic) Party, the former chief of staff to the last progressive president, Roh Moo-Hyun. Moon issued a statement on his future policy toward North Korea last week, more significant than any of Trump’s blustering interviews but almost completely ignored outside of Korea.

Moon laid out a return to full-scale engagement with North Korea, along the lines first articulated by the late President Kim Dae-Jung as the “Sunshine Policy.” This engagement would rest, Moon said, on a foundation of a strong defense, anchored in the alliance with the U.S. but with enhanced independent Korean military capability, including its own missile defense system – Moon opposes the THAAD deployment. According to an unofficial translation, Moon proposes restarting the six-party talks and re-opening economic cooperation with the North, leading to an eventual economic unification plan.

Most importantly, the likely next President of South Korea insists that Seoul, not China or the U.S., should lead the process. “We will no longer rely on ‘Beijing’s role’ to change Pyongyang and will form a new framework of inter-Korean policies based on ‘Seoul’s role,’” Moon stated.

The Trump administration’s ‘let China do it’ policy has little support from Moon and his advisors. “Progressives in South Korea violently disagree with the narrative that the Chinese are going to resolve this,” an American policy maker familiar with South Korean politics tells me. “They don’t want China to do it. They accept the North Korean assertion that sanctions don’t work and want to lessen Chinese influence in North Korea.”

President Trump has managed in recent days to throw gasoline, if not dynamite, on the smoldering coals of Korean nationalism. He told an interviewer that he was ready to end the U.S.-South Korea Free Trade agreement and called on South Korea to pay $1 billion for the cost of the THAAD deployment, not only contrary to the existing understanding between the two countries but deeply angering progressives who have opposed it all along. National Security Advisor HR McMaster attempted to calm things by affirming the previous agreement in a call with his South Korean counterpart but the damage has been done.

There has been no contact between senior U.S. officials and those who are likely coming to power in South Korea, despite visits by the Secretaries of Defense and State and the Vice President in recent weeks. By now, “the progressives are not in the mood to listen to the U.S.,” the knowledgeable American policy maker said. “The whole game is about to crumble.”