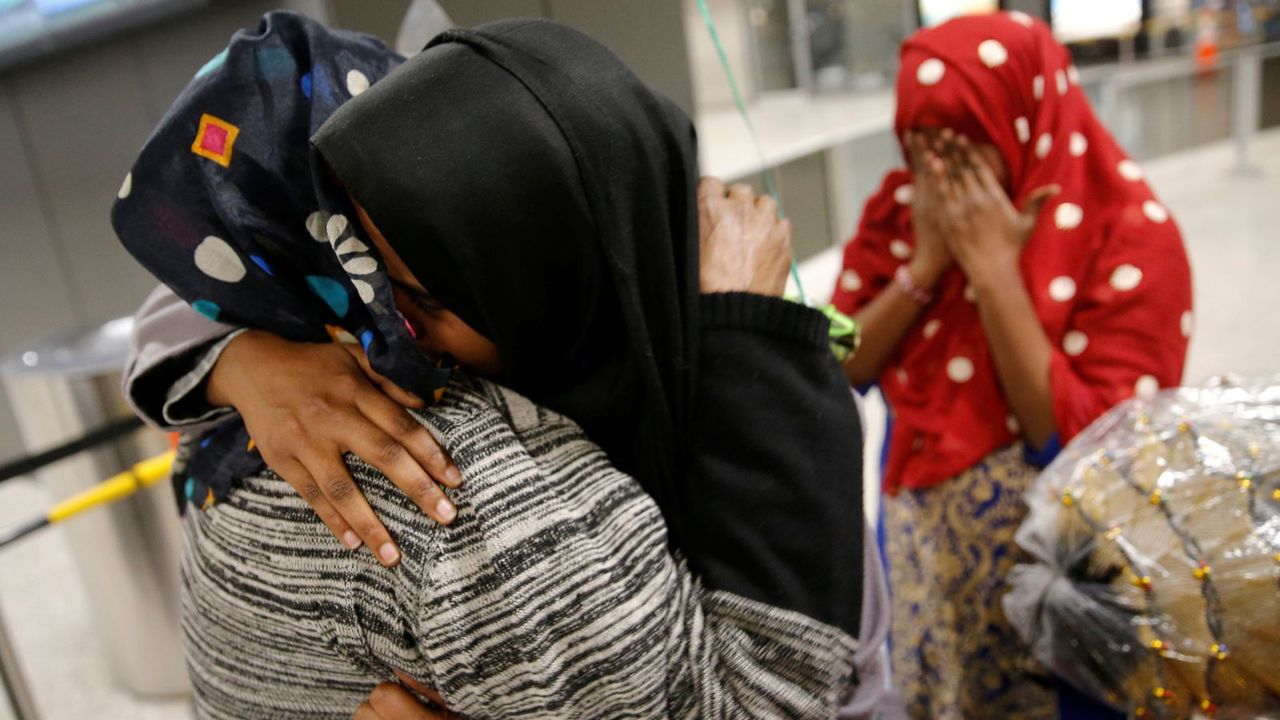 On the morning of January 28, the world was turned upside down. President Donald Trump signed an executive order, a week into his presidency, suspending the entire refugee admissions system for 120 days. This included suspending the Syrian refugee program indefinitely and banning entry to people from seven majority-Muslim countries – Iran, Iraq, Libya, Somalia, Sudan, Syria and Yemen – for 90 days.

We have all seen the aftermath of this order – a series of legal challenges and most visibly, the thousands of Americans protesting outside airports and courthouses in solidarity with Muslims and immigrants. Posters such as, “We are all Muslim,” and “Freedom of Movement is a Human Right” have filled our TV screens. One man simply held a ‘Welcome’ mat that we place outside our homes.

It all began in 2015. On Dec. 7, then candidate Trump issued this statement on his website - donaldtrump.com:

Donald J. Trump is calling for a total and complete shutdown of Muslims entering the United States until our country’s representatives can figure out what is going on.” He further stated, “Without looking at the various polling data, it is obvious to anybody the hatred [against Americans] is beyond comprehension. Where this hatred comes from and why, we will have to determine. Until we are able to determine and understand this problem and the dangerous threat it poses, our country cannot be the victims of horrendous attacks by people that believe only in Jihad, and have no sense of reason or respect for human life. If I win the election for President, we are going to Make America Great Again.

Over a year later, now President Trump has fulfilled that campaign promise.

That is what countless Americans are calling President Trump’s executive order. Trump has denied this, saying his policy “is not a Muslim ban, as the media is falsely reporting. This is not about religion – this is about terror and keeping our country safe.”

Her case was solid. She was fleeing a brutal dictator and the inhumane practice of female genital mutilation. Like so many others, she had left her West African country of Gambia to seek asylum in the United States. After years of undergoing countless interviews and biometric checks, Sera Jainaba was finally granted permanent residency in the United States. Working as a hairdresser, she now lives in Seattle with her family.

The choice had been made for her. As a natural born American whose parents had left Pakistan, the birthplace of Wahhabism, Fatima Khan grew up in America, eventually becoming a homemaker making a life for herself and her family in New Jersey.

This was his dream. Ali Raja had finally made it to the United States on a F-1 student visa. After years of working 15-hour weeks, obtaining a green card and eventually marrying an American, Ali became a naturalized American. He works in finance and lives in New York with his family.

Three different individuals, all with unique stories, but they have one common thread – they are Muslims, now living in President Trump’s America.

Sera, Fatima and Ali disagree with Trump. They call it a Muslim ban.

“It’s the way Trump positioned himself,” said Fatima. “In his speeches he stated that Islam is the enemy.”

Fatima considers herself a modern woman who is faithful to her Islamic beliefs. She is an Orthodox Muslim – a Shi’a married to a Sunni. By all accounts she’s a typical American woman. She quit her job in finance to take care of her daughter, who she takes on playdates, library visits and her family enjoys camping trips and extensive road trips. She did not vote in this election because she felt conflicted by both candidates. If pressed, she would say that she leans Republican. But more importantly, she’s a patriot who strongly believes in the Constitution. For this reason she believes that Donald Trump’s actions are un-American.

“America is held to a higher standard and Presidents are held to this high standard,” she said. “America is a country of refugees where people have fled prosecution. It will remain this way.”

When candidate Trump talked about a Muslim ban at rallies she didn’t take him seriously.

“It was too un-American and too ridiculous that any President would go through with it,” she said, “It was blatantly racist.”

On a recent trip to South Carolina, Fatima and her family experienced this racism. After arriving at their hotel at 5am they asked about a late check out. The front desk clerk reluctantly agreed to a 12pm checkout, instead of the requested 1pm. Exactly three hours later, at 8am, housekeeping started vacuuming right outside their door and went as far as to open it. Startled and now fully awake, they decided to get some breakfast. Upon entering the dining area they felt such coldness from other patrons that it finally dawned on them that they were not welcome. They hurriedly left the hotel, feeling very saddened by the experience.

Sera recounted something similar. Outside her salon, a Somali man tried to reverse his car out of the parking lot. In so doing he touched the car of another driver. The man assumed that the Somali man had scratched his car. What happened next shook Sera.

“The man came inside the salon and started insulting Muslims,” she said. “He said Muslims were destroying America.”

She remained silent. She chose to be careful for one main reason: Sera wears the Hijab. This clearly identifies her as an Orthodox Muslim woman. She said that many of her friends and acquaintances were leaving their Hijabs and not wearing them in public because they were scared. They thought that they might become a target.

Sera, a Hillary Clinton supporter, said that becoming a target was unlikely in Seattle, as it was a safe place for immigrants, particularly Muslims. Three quarters of the African immigrant population are Muslim Somalis living in South Seattle. Many of them were angry and felt that Trump hated them. They were also afraid that it was now unlikely that they could bring other family members to America.

Be that as it may, they generally felt safe in Seattle. To highlight this, the aggrieved man who had insulted Muslims later came back and apologized to everyone in the room. This further restored her faith in America and the overall decency of the average person.

Ali agreed. Although he concurred that the President’s order came across as a Muslim ban, he said that this didn’t bar him from believing that America will always be a safe haven for Muslims.

“They come to America for freedom,” he said.

He came to America for the same ideal. Arriving as a student, joining the workforce and later getting married and settling permanently in New York, Ali described himself as a patriot. His religion as a practicing Muslim did not conflict with this patriotism. His priorities in the 2016 Presidential election were three-fold: immigration, infrastructure, and jobs. It was for these reasons that he voted for Donald Trump.

Ali was not entirely opposed to the ban for safety reasons. What did concern him was the way in which it was done.

“He’s alienating a lot of people,” he said. “He’s playing to his base without understanding the religion.”
Ali said this stance was fueling terrorist propaganda and anti-Muslim attitudes that were hurting innocent people.

This was seen in the recent burning of mosques in Texas and in Canada. On Jan. 28 in Victoria, Texas, a mosque that was the object of hatred years ago was burnt to the ground. And on Jan. 7, a mosque under construction near Lake Travis in Austin, Texas was also burned to the ground.

Fatima agreed, “We don’t live in a bubble. To every action there is a reaction. You can’t issue a Muslim ban and expect that the other side won’t react.”

She said that Trump had fueled anti-American sentiment in terrorists and should have signed off on this ban in a strategic manner.

“Not do it so blatantly, not hype it up, no signing of an executive order.”

If President Trump had chosen a more diplomatic approach, much of this outrage could have been prevented. In Dec. 2015 President Obama had signed into law the “Visa Waiver Program Improvement and Terrorist Travel Prevention Act of 2015.” This law, enacted in response to the 2015 Paris attacks, terminated the travel privileges of people previously covered under the Visa Waiver Program. This included dual citizens of Iraq, Syria, Iran or Sudan.

In Feb. 2016, Homeland Security then included Libya, Somalia and Yemen as three countries of concern, thereby limiting travel for certain individuals who entered those countries. This brought the number to seven. However, they did stipulate that individuals in those countries would still be able to apply for visas using the regular immigration process at US embassies and consulates.

President Trump could have followed this directive and further called for extreme vetting of all visa applicants from those countries.

All three individuals were clear on one thing – extreme vetting was essential.

“No criminals are welcome in the U.S.,” said Sera. “They should be deported.” She went on to say, “Terrorists are not Muslims. We have similar values to Christians. Anyone who wants to kill people is not a Muslim and should not be allowed into this country.”

Ali said that the challenge for Muslims in America was to assimilate the right way - to highlight that Islam is a religion of peace and equality. Perhaps President Trump would not paint all Muslims with one paintbrush.

Certainly, many Americans do not do so. They differentiated between terrorists, such as the San Bernardino shooters, who were radicalized, and patriots such as Ilhan Omar, a Somali-American woman who won a Minnesota House seat.

Whether the ban is reinstated or permanently lifted, its psychological effect on Muslims living in America will remain.

America is a country of immigrants. Ellis Island in New York City reminds us of this rich history. Muslims in America are part of this tapestry. The burden is on President Trump to go deeper and find the distinctions between all those who hold this faith. Keeping America safe is the duty of every President. Americans expect nothing less. Perhaps he should reach over and adopt the slogan of his illustrious opponent –